Turn 1: Soviets fail to dig in. German Pak38s move to the rock wall.

Turn 2: Soviets bring on 5 T-70s on the far right flank with Scattered Reserves and they come down off the escarpment and line up with the infantry. Sappers come on at the farm house by the left Soviet objective. Germans get Panzers right in front of the Soviet light tanks an bail 2 T-70s and kill one. 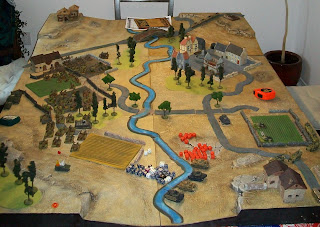 Bottom of 3: T-70s have just doubled it away from the Panzers. Panzers move to the creek and kill a Soviet infantry base. Reserve german HTs race down the dirt road on the Soviet left flank (top right). 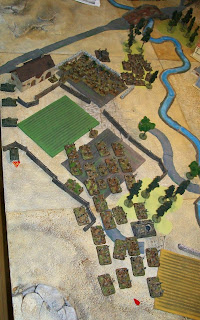 Top of 4: Soviet battle line. Notice the T-70s on the left still running from the advancing Panzers. The T-70 commander gets bogged on the fence and remains there for the game. 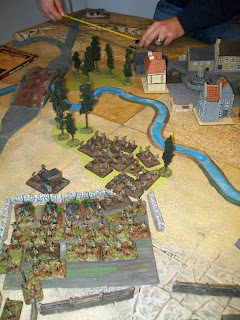 Close up of Sappers' aggressive push forward into the forest - suprising the Germans? 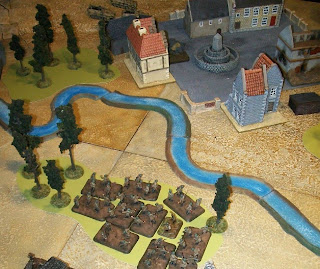 Bottom of 4: German Half-tracks drive towards the ass-back end of town. 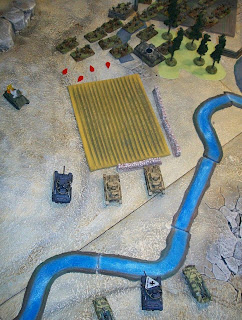 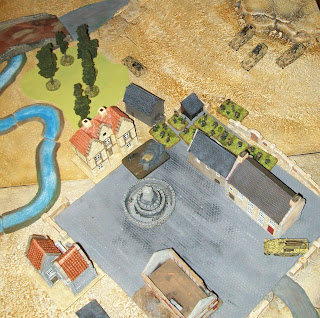 Bottom of 5: German Half-Track reposition after disembarking troops into the town square. Getting ready for the advancing sappers. 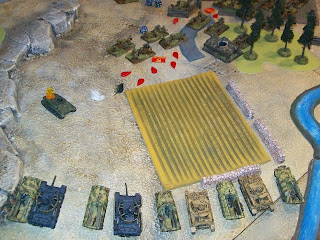 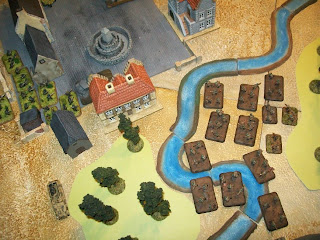 Top of 6: Soviets push towards the objective in the town. 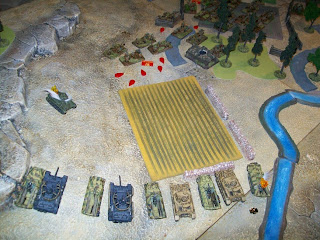 Soviets AT guns move to engage a German HT on the right flank. Kill it and its passengers. 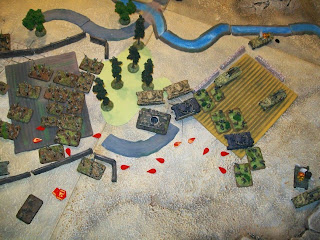 Bottom of 6: Germans crunch Soviets under tracks. Push them off the objective. On the left flank, German HTs reposition into the town square and hit the advancing sappers with MG fire (see below image). 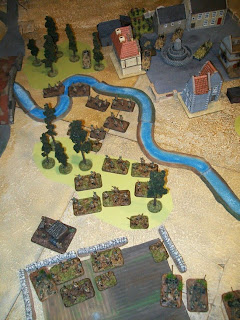 Top of 7: Soviet Sappers keep pushing towards far left objective. AT guns reposition to hit the HTs in the open. German conscripts try to get the lost objective back. Do nothing. Will last at least one more turn but its too little too late.

Bottom of 7: Germans will claim right-most Soviet objective in a turn or two. Game, Set, Match.

AAR: We ran this as a Tag Team-style demo with 2 players aside. Each side with one new player. As such we didn't use a proper scenario. The Defending side didn't have an ambushing platoon which may have made a big difference. Being able to place the AT-guns after the reserve Panzers showed up could have changed things. But in the end the main downfalls for the Soviets were: having all their AT in one place and not being aggressive enough.
By CA$H at February 27, 2011