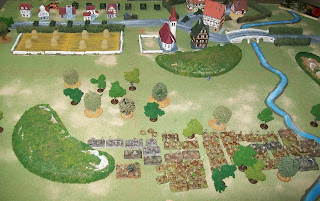 Deployment: Pripyat's force is on the bottom ("nearside"). Made up of scouts (grey bases), large conscript horde with attached sappers (brown bases) and flamethrowers (blackish bases). Both near objectives are straddling the large horde by the river and the hill (small infantry, AT guns and 6 T-34s in reserves). Lothlann's armoured force from left to right; trained moto-infantry along the road, T-34s behind small houses, Armoured recon amongst tall buildings (in reserve are 2 Su-85s, 4 Su-76s and a buttload of Stuarts). First turn passes uneventfully. Barely any movement. Both recon units move up slightly after deployment. 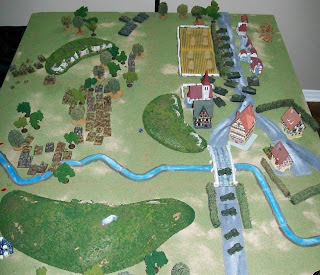 Top of 2: Pripyat gets two reserve companies. Tanks aggressively push up the left flank - 12 inches (top). Conscript horde is free to move forward as the arriving reserve AT guns move in to secure rear objective. Scouts step into the treeline. [Bottom of 2, Lothlann's tank company moves forward and fails to impress (bails one or does nothing). Transports engage scouts in treeline and kill one.] 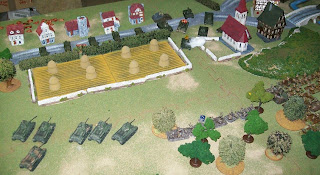 Top of 3: Pripyat's nearside tanks advance and kill one and bail one or two. Infantry push forward.

Bottom of 3: Lothlann's tanks split fire at the advancing tanks and infantry. He manages to bail a nearside tank and with machine guns punishes the advancing infantry focusing on conscript horde on the right. 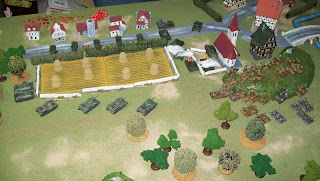 Top of 4: Nearside tanks advance and continue to punish enemy T-34s. Nearside infantry continue pushing forward. Two flamethrowers get in range and attempt to cook some tankers but fail to impress. Scouts weave right to give right flank some extra meat. 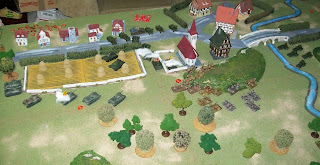 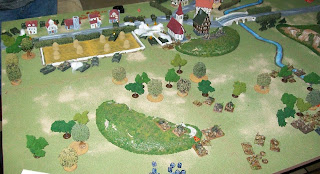 Top of 6: Pripyat's tanks engage Lothlann's transports. Pop two and kill 3 embarked infantry. AT guns move up and attempt to take out a few enemy recon vehicles and manage to push them back (right).
[in turn 5 Pripyat attempted to snipe the 1ic by moving one tank forward onto the road (top left). He destroyed the enemy command vehicle but the warrior managed to transfer to a nearby conscript tank. The tank company then fled... BUT after having zero reserves arrive Lothlann finally had some luck and got two Assault Gun companies and lined them up behind the row of houses, facing the lone T-34...and slaughtered it. Lothlann's transports book it way from advancing tanks and continue to engage infantry.]