After many years of playing Flames of War a few months ago I decided that I needed some 15mm scale buildings. I have played on great tables both at tournaments, FLGs, and friends places but i decided i would like to have a few for when I host games at my place.


I looked at buying some buildings and found the price a bit steep, and I also looked at building some houses out of foam core. After a few attempts I just couldn’t make the foam core work so I decided to look at other options. I have seen a few really nice pieces of laser-cut terrain and have a bit of design experience so I though designing some laser-cut buildings would be the way to go.


I looked at a few online designs for inspiration, and then dove right in. There are a lot of great resources online like this one from FunElements.com: 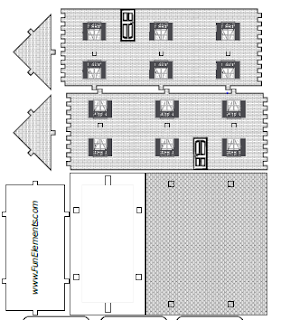 After seeing a few designs I had all I needed to get started on designing a few buildings. I decided I should design my own buildings. I wanted the buildings to be stackable and to fit Flames of War bases.


My first buildings were:


After that I looked at:


As you can see, it proved to be a bit addictive...


While I was designing, I also get certified to use the laser-cutter at my local library and started burning. I took some photos of me assembling one of my buildings below. I am quite pleased with how it turned out.
The design is burned on an 12x24 inch sheet, using .pdf file. I create the file using a free program called Inkscape. Then you send the file to the laser-cuter just like if it were a printer.
Here is the product right out of the cutter: 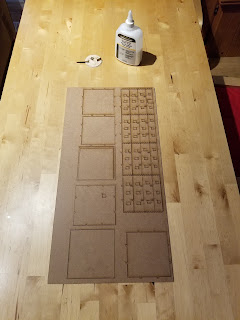 All you do is punch the pieces out and glue them together; I like to use white glue because it dries clear: 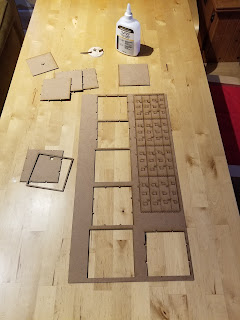 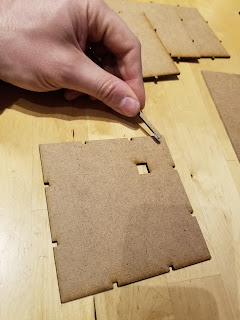 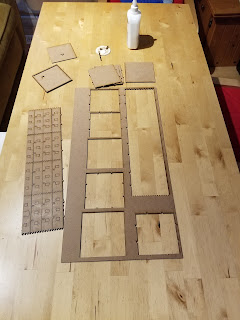 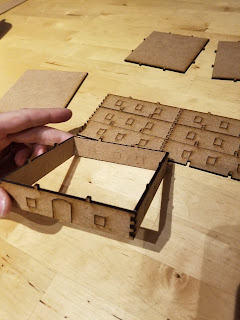 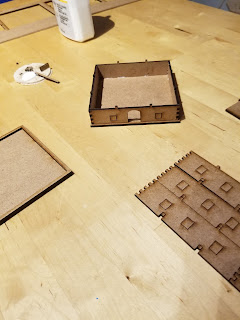 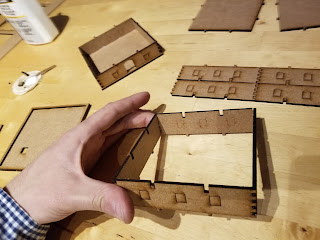 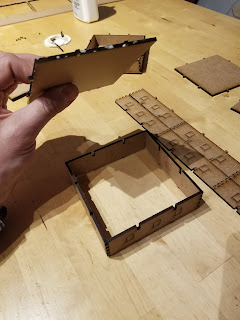 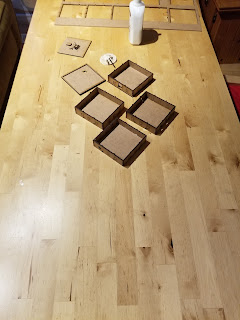 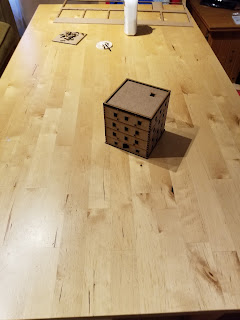 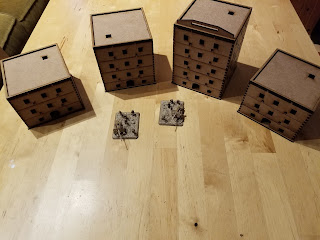 Below if a video of all my buildings, still have a few more of the square office buildings to assemble. Next step is to paint them..

I've been feverishly painting the new Star Wars Legion core set since it was released*. So far I've painted all the Imperial forces in the set.

I left for last the master of evil himself, Darth Vader. I had originally planned to spend a week painting him. Black can be tricky and he's just a bunch of different sheens of black. Not only do I struggle to paint black but I had decided to make my first attempt at OSL on this miniature. Scary stuff.

A quick aside for anyone not familiar with OSL. It's the flavour of the month when it comes to mini painting. It's painting the miniature as if it were lit by an object on the miniature. In this case I wanted the glow of the light saber to spill over on to the rest of the model. It's not my original idea - everyone is painting their Vader in this way.

With that in mind I sat down to paint Vader one day and after 40 minutes ended up with this: 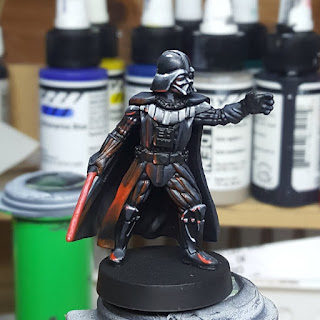 Not bad for 40 minutes. In fact, I realized that spending much more time would likely have negative results. Sometimes, especially for wargaming miniatures, there's a point where fiddling with the paintjob is just going to ruin it and knowing when to stop is the most important skill.

Here's how I painted the black.


First, I found some reference pictures of Darth Vader out of doors. Not Vader on a set meant to look like outsite, but an actual image of Vader out in the sun. It took a bit but I eventually figured our "Darth Vader Disney" was the search terms to use.

I've lately been thinking about NMM (or painting metallic surfaces with non-metallic paints) and why some techniques work and some don't. Looking at reference images I noticed that my mind aggregated the metal surfaces into abstract lights and darks but if I looked closely I could make out reflections of different objects in the surface. Glossy surfaces are essentially the same as shiny metallic surfaces.

With that in mind I paid close attention to Vader's helmet in my source. I could make out nearly black trees, pale blue-grey sky and white clouds. It wasn't just a smooth, flat transition from black to white.

I started with the sky colour which was a mix of Carbon Black, Titanium White and Ultramarine Blue.** I brush it on the lighted surfaces imagining trees in the negative spaces left by the black. I then took a nearly white version of this and brushed on clouds. Finally I painted the lightest reflections and spots of white for the sun.

At this stage I found things a little too rough so I took my black and thinned it heavily with medium until it was a glaze and brought down some of the hardest transitions. My original plan was to leave the transitions sharp as this is what I saw on the reference photos but the effect was so bright I felt the black was lost. Glazing with black allowed me to bring it back slowly until it looked like black and then stopped.

Vader's inner suit is a type of quilted fabric which was a bit glossy. I follow a similar colour scheme as the helmet except I added more Ultramarine Blue and didn't worry about trying to paint reflections of trees and clouds. Just sharp highlights going quickly to black.

The Cape and Robes

The Saber and OSL 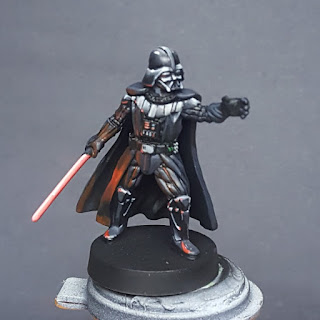 While this is my first attempt at OSL I've been following the trend for a long time and have spent quite a lot of time thinking about how it should work. I came up with the following guidelines and put them into practice.

For every doubling of distance the light is four times less intense. This means that any close light source will not be able to evenly light a surface. The light will be very intense right next to the source and fall of quite quickly. You can see this how the reflected light on the tabard doesn't extend the full length.

A small light source has the greatest effect in the shadows of the primary light.

Unless the OSL light source is the primary source of light on the miniature it will struggle to show up over anything lit by the primary source. This means the OSL will be strongest in the shadows. If you simply glaze over a highlighted area the effect won't look right.

A reflected light is the same intensity of the light source

Vader has lots of glossy surfaces which show specular highlights from the primary light source. These areas won't show a diffused effect from the OSL source. Everywhere I tried to show a glossy surface received a full brightness red reflection from the saber. Although some of the surfaces are far away they would still reflect the full intensity of the saber. I did make a mistake in the left foot which should have a much smaller reflection to show both the concave surface and the extra distance.

All told I spent about an hour painting Darth Vader, much less time than I had planned. My goal is to paint all the miniatures in the core game as quickly as possible so that I can expand my forces. Army painting is a different beast than painting for competitions. It is important to know when enough is enough. In this case, although I can spot all sorts of small flaws in the miniature, I am not going to touch it any more.


* Well, April 9th since I had some miniatures to finish before I could start.
** I used Golden High Flow Acrylics which are very thin artist paints which can be brushed or airbrushed out of the pot. I only use 10 paints, plus metallics when necessary.
By Coyotebd at April 29, 2018 No comments: