Just a heads up that I have been dealing with a rather unexpected and very sudden loss in our family, and I have been busy for the past few days and see this continuing for a few more...

All that said I am itching to get some 40k in with my Blood Angels, or to do some practice games with my Guard for the tourney in May.

So after about 20 games, and about that many lists, I think I have hit upon a 1500 point list that gives me tons of tactical flexibility while maintaining the close combat "feel" I was/am after with the Space Wolves. Here it is:

Obviously the wolf guard each join a unit as needed. The wolf priest joins the unit with the drop pod- giving them preferred enemy, fearless, and with the wolf standard, one nasty assault. They are also fearsome to assault into. I'm open to people's thoughts and comments on the list. 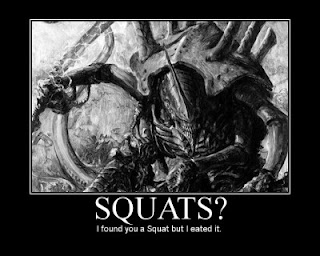 Alrighty, so this is a list I've been messing with, and more importantly, trying to build some models for:

What I need to do to play all-painted, I'd have to paint 2 zoanthropes, 2 primes. Obviously the like-armed Primes go with their respective warrior units, giving them ws5, bs4, and on the charge, each prime dishes out five str 6, ini 6, power sword, instant death attacks....
By CA$H at April 12, 2010 No comments:

Well, I finally finished painting my 1500 pt tournament list, and took it for a test drive vs Lothlann's progressively khornate Traitor Guard, SM Mohawk's Ultras 1st Co, and then Diragi's Ultras-soon-to-be-Space Wolves. Duane, aka Diragi is the guy I got into the hobby with back in '97, and he was playing his first game of 5th ed.

FYI, Sorry about the store music being way too goddamned loud in some parts, no control over that.

So i'm trying out a new guard list, this is what im going to take to the store tomarrow to have a game with Matt Varnish.

thats a flat 1500 pts. Its my basic list with a bit of a mix with the hydras which are new (pics to come) and with a small platoon insted of 2 more veterans squads, which allows me access to heavy weapons teams.
By CA$H at April 07, 2010 1 comment:

Ok so I got work done on my guard the last couple months, but the release of my original 40k army has my mind thinking Blood Angels these days...

I picked up the Death Company boxed set and I was floored by the stuff in it!!!

GW has once again, got its claws into me. There are so many options in this box for weapons and wargear I plan to buy a half dozen boxes to outfit my entire army with new goodies :)

The plastics are of incredible detail as well...

I'll throw up pics of my Blood Guard (Angels) captain I painted this week. He will be leading my Sternguard and acting as a Sergeant for now, just a heroic sergeant :)