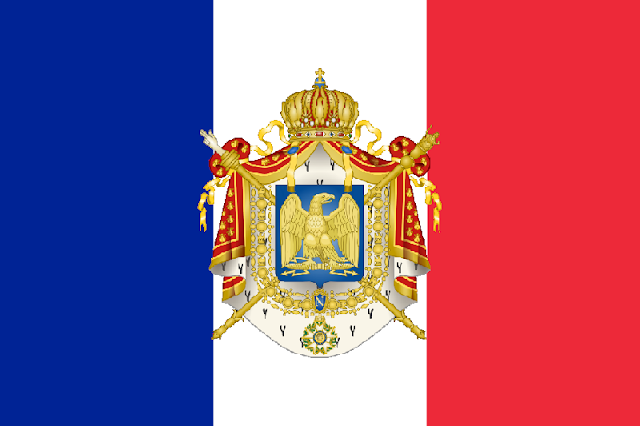 Quick hobby article.. had a great game of Black Powder showing the ropes to Rob, David (British players with 1 painted battalion apiece) and Christian (who is waiting for MDF bases for his French)    However, the footage for that game is on another machine, so instead, I decided to fix all the chips from a disaster that occured driving home from that game on Good Friday: 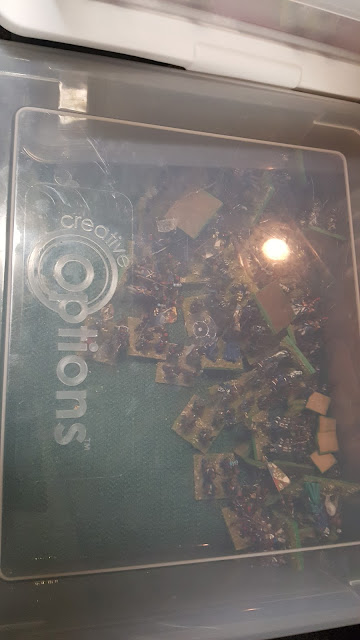 I had slammed on my brakes, and David and I could hear all my models jostling around the trunk.. So this is what 7 battalions all smashed together looks like!    I have already fixed all the damage (mostly bayonets) but figured why not start by highlighting my battalions as I fix paint chips?    I had initially just speed-painted these guys to get them playable. 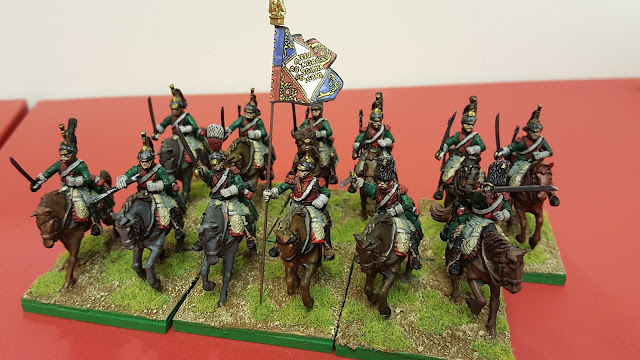 These are how my whole army looks:  Blocked-in colours, a wash.  Thats it.  "good from far, far from good"  But this allowed me to play a whole Division vs Scott pretty quickly. 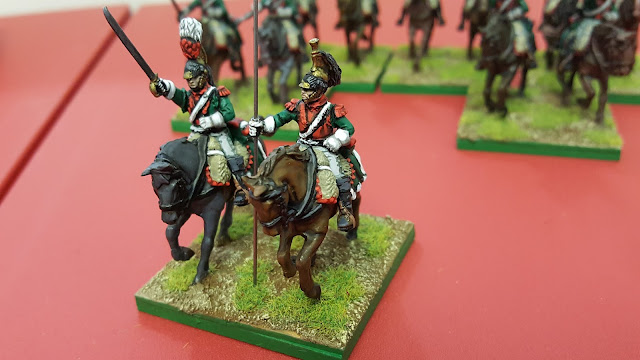 Command base, with white highlights, sky grey on the trousers, green and red highlights, the bridlework done in black, with a dark grey highlight.  about 30 minutes. 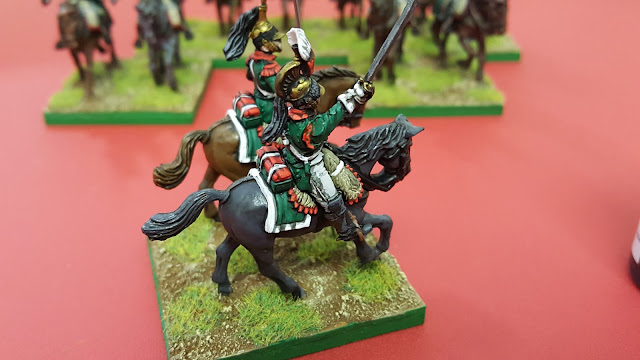 When highlighting the cloth, I left dark areas for shading.  Turned out great.  Vallejo 909 Vermillion is a great red highlight color. 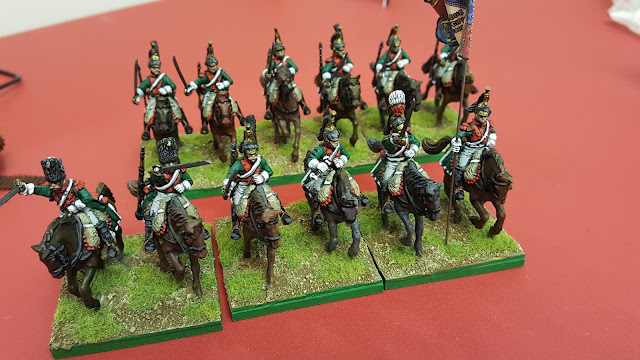 All 6 bases done.   The white really pops on the strapping and gloves.  FYI, these are Perry Plastics, with a few different torsos and arms.. I built these when I had no clue.. I mean I didnt know what a Turnback or Shako was :)


Bonus pic:  Ever wonder if there is such thing as too much stowage when putting together a tank? The answer is yes: 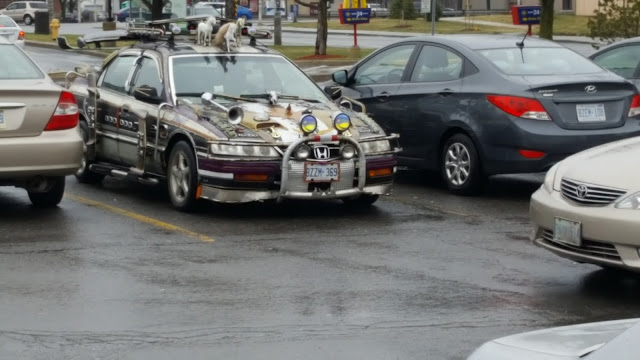 No idea what this guy was thinking when he was putting wings on top of wings and onto the SIDES of his car..  Oh, I watched him pull away from the parking lot.   The horses' eyes on the roof light up in red!!

Anyways, on to highlighting my other Dragoons.. exactly the same as above except yellow instead of red.   Riveting stuff, I know! 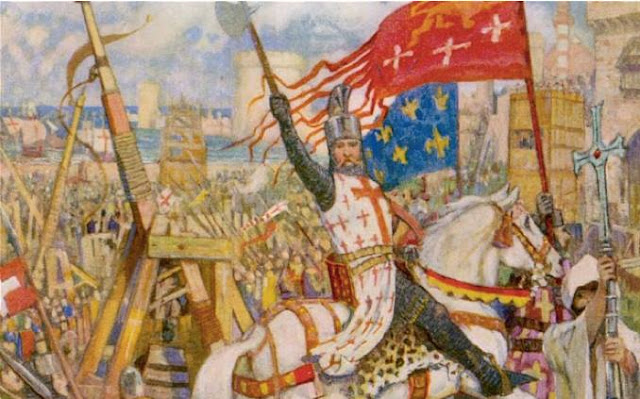 Getting into SAGA has been a long and complicated road. Over the past two years, I pushed to try out a game I had played at a gaming convention in 2015. With the majority of our group having played some sort of 'Fantasy' based game years and years ago (Warhammer something something), there was not a lot of appetite to get into anything resembling a fantasy based game again. With the several other gaming systems like Infinity (more like 'Unfunity') and Kings of War (magic Goblins FTW) failing to scratch the itch of either a fantasy, or skirmish based, reactionary game. The Dice Devils have decided to take on SAGA, buying and painting armies, it looks like we'll give it a shot!
Click Here To Read More
By Matty at April 09, 2017 4 comments: 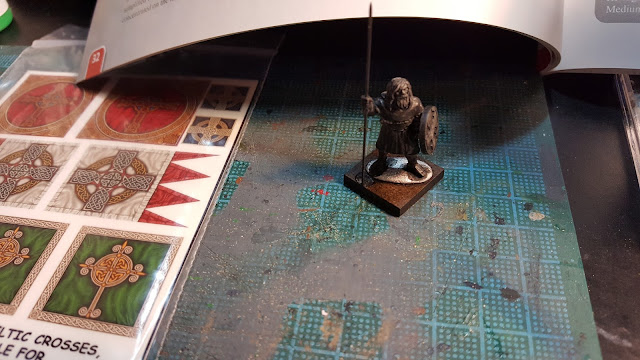 Straight up, just a hobby post, here is my test model, from Footsore Miniatures a spear & shield Scotsmen for SAGA/ Frostgrave. Undercoated with a black brush on primer 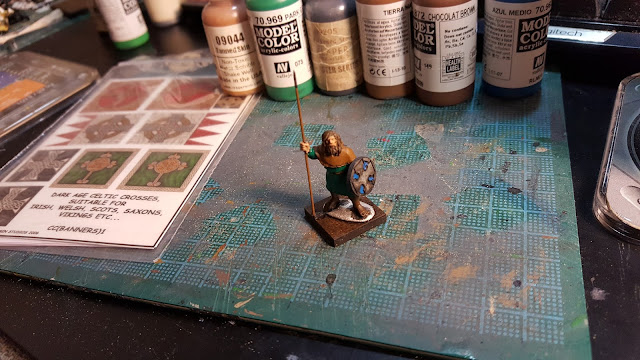 Blocked out the main colors prior to a Army Painter Soft Tone wash. 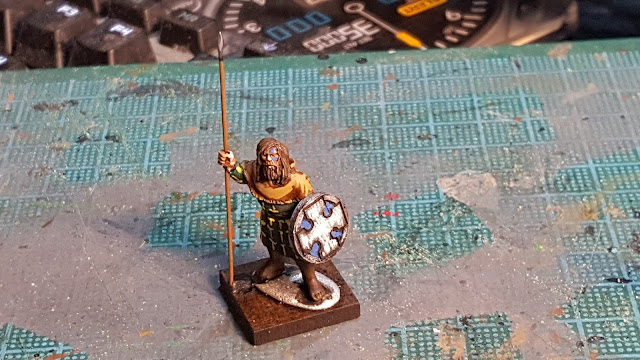 Pleased with the model, just not the tartan. 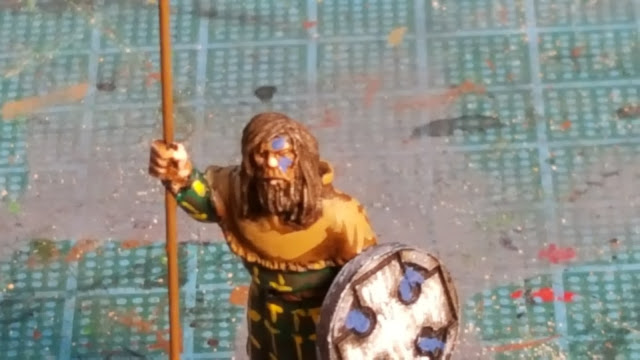 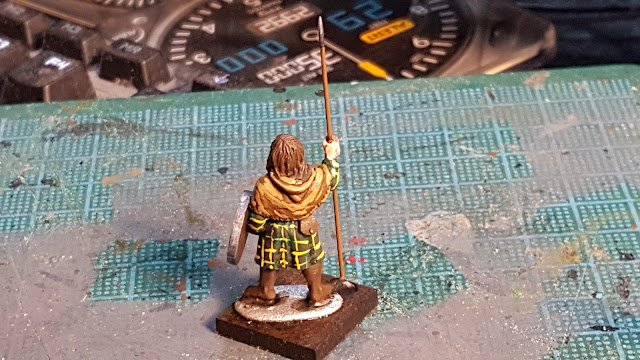 Quick vid as is the norm: