This past Friday saw our group get together for our FNF - Friday Night Fights. "RoyalFalcon" and myself brought our Warmachine and got 2 games in. The first was only 15pts, allowing Royal to try his Farrow out and get a feel for them before we moved up to 25pts. I ran Cygnar. Here is the report on the first game:


The second game was at 25pts and saw Royal's Farrow (Minions) against my Mercs - and I got to try Ashlynn out for the first time:


We called the game at the end due to time(it was approaching midnight) and it was going to be cat and mouse for a while. Overall we learned a lot about Command Checks and terror, and it was a fun, bloody game.

Worth a read....Flames of War- Seven Things That Went Wrong With Version 3 - My thoughts.

Flames of War- Seven Things That Went Wrong With Version 3

I recommend any FoW player should read it through.

This article got me thinking. This may be why I only want to run scenarios or historical based games these days.......we were talking about getting something specific going over the winter at our Friday night games. I am enjoying Warmachine immensely right now, and I don't want to stop play FoW, but tournaments hold 0 appeal to me know. I kind of feel like its a "been there, done that" kind of thing. Not all tournaments in general, just FoW to be honest.

I have always been more interested in campaign/league play. I think some of the appeal to Warmachine for me now is the way Privateer Press runs leagues every quarter, along with regular "Journeyman Leagues" for new players, or people wanting to start a new faction. This is something Battlefront and Flames of War, arguably, is better suited to. Their infantry/tank aces ideas were awesome, if not fully fleshed out. But alas....

Our group, while still mainly a FoW group, has always seemed driven by the next event - a tournament. This is not a "bad" thing. We all know the motivation that comes with having to get models built and painted in time for an event. This coupled with wanting to "test" lists leads to many games getting arranged and played - these are all great things. The rut that this can lead to (speaking about myself here) is always pushing for the next event means one of two options: 1) Take the same lists/army - one that I know works, and I can expect to place well with or 2) Take the new "hotness" that is stronger than option 1, and may make option 1 obsolete. Talk about a choice....
I am not some power creep mad competitive type (at least I don't think I am) but I like to put a good fight, not get rolled over. Flames of War, since version 3, has some clear issues with power creep, specifically in Late War (the most popular time frame, where most events take place). Late War also has most of the gear and models people want to paint and play. Hence the issues mentioned in the article posted above.

Do I have the answers? No, I have but a few ideas, and they all stem from the mindset of league/campaign player. I think Flames of War really shines when everyone is playing out of the same area - the same setting, locale, lists, and "Front". The game just works better. But it isn't that easy - there is no guarantee that everyone wants to play armies from the books for a specific theater of war.....so it makes it tricky to build a campaign all will want to play in. We were actually discussing this very thing this past Friday, so Dice Devils may be kicking off something soon....

I am also playing more Warmachine, and other games, on a regular basis. I see this as a positive, as it expands my gaming and I am meeting other gamers that are in the area. Infinity is also a solid game that deserves more of my time. All this to say, expect this site to start showing coverage of different games going forward.

So I am doing something about it. I just ordered in and received :


A sweet addition to my fledgling Mercenary army. She can raise fallen warriors to join the ranks, and it adds some cool, creepy flavour to my Mercs. From BattleCollege: "Alexia is essentially a mini warcaster with the risen as her "focus". She can sacrifice a risen to pawn off damage as well as boost attacks and spells. She can also bring living models back as part of her army of undead. She is fearless and the risen are undead so there is no fear of abominations or terrors." How cool is that?!?!!

I am also looking to start Menoth. Having bought, painted, and played the Khador, Cygnar, Legion and now Merc sets, I have a hunch the "BURN THEM ALL!" mentality and synergistic play style of Menoth is something I will enjoy. I also really want to run "jack heavy" and Menoth is the faction to do that with. So I am taking the plunge on yet another faction!

I plan to to keep going with the Mercs as my second Warmachine army, and stick to Legion for when I want to play with Fury. I hope to track my progress on these pages.

Last night I hosted a "let's get back to play this game some more" night and a few of the lads showed up. Joyous Oblivion with his Cygnar, and "TheRoyalFalcon" with his Khador. Pripyat also swung by to check out the action (he has yet to get into the game) and I snapped a couple pics : 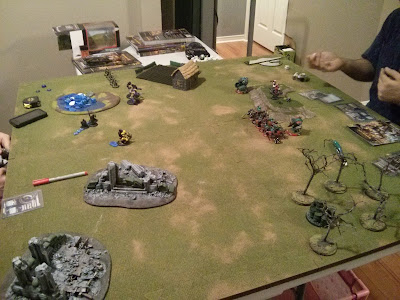 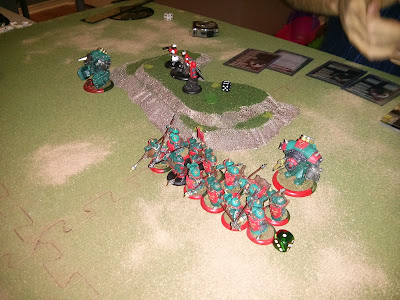 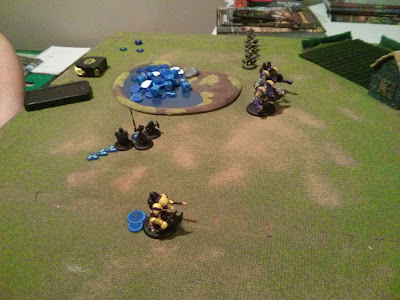 It was a close fought game, with both sides loosing all their infantry and leaving just Irusk and his Demolisher chasing Captain Kara Sloan around with only an immobile Hunter for support. Great game guys!

So if Warmachine is something you have even a passing interest in, stay tuned for the upcoming coverage! And trust me, despite all the starter sets and small forces I have, I am still a n00b, and we will be learning all the hard lessons together.