Ok so I got beaten by CA$H (Khador) and Lothlann (Cryx) last night in a couple 15 point matches.

Learning new rules is tough, and these rules are quite unforgiving!

I got my caster killed both games, the first to poor positioning and the second to a failed death or glory on his caster, I only left her with 1 hit point!!!

I really can't wait to see what adding solos, units and more points will add to the game, as 15 points of jacks on jacks is a little predictable now (I hate that freeze effect).

I promise I'll take some pictures for next time, or maybe con Matt_Varnish or CA$H into taking a video batrep for us!

Beats to the Rhyme...

"Beats To The Rhyme"

DJ's and MC's, coming up next is the one and only
incredible, Jam Master
Yo, back up off the ropes, punk

Beats to the rhyme, the rhyme I just made
Party at the jammie til lights the night fade
Trooping for the feature we all get paid
So let's go


Seriously does this guy not look like a DJ of sorts, the kind to break out into some old school Run DMC with a mic in one hand and the other spinning a record?

I have been acquiring and building stuff this past week, and with me moving in a few weeks, packing has sapped my painting time.

I am in the middle of assembling this guy...

Hopefully he will see primer soon and then some paint, I have some interesting ideas on what to do with lightning effects!!!

Pics on my Sentinel to come by the end of the long weekend as well as a summary of my recent game against a Retribution of Scryah player!
By CA$H at May 22, 2010 5 comments:

Hey guys, well I have signed up for a 40k tournament in 10 days, Cangames' Ottawa Astronomicon.

Ca$h and I had briefly considered going to the Toronto version of this, but then saw that they were using VDR and other wonky rules, so we decided against it. However, I keep hearing such good things about it, and then saw that Lt Walke from CWC Forums, aka Jason Kebic, was running a mini Astronomicon for Cangames using the same rules, so figured I'd give it a whirl.

Now their comp system is a bit odd, everyone starts off with 20 pts and you start with 1 HQ, 3 troops, 1 FA 1 Elite and 1 HS choice. For each choice PAST these, you lose 1 point, if you go 2 past, you lose 2 more points.. Sounds confusing, they have a graphic, but the point is this: I am planing on taking 3 HS, but start with 1. so the Second HS taken is a -1, the third one is -2, for a total of -3. Luckily, I'm playing Guard, so the three Troops Choice limit is decent for me, I just shove as much into my one platoon as possible. So what I've done is taken away one unit of veterans, and the astropath is gone, and that pays for 6 rough riders, plus 3 more lascannon teams, for 1480.

OH and theres a video of my game tonite coming, too bad youtube is slow to upload to.

EDIT: Ive taken out the siege breaker rounds on both medusas, and with 30 points to spare, have added the Fleet Officer, to mess with enemy reserve rolls :)
By CA$H at May 13, 2010 9 comments:

Starting on the Warmachine Forums I find this:


First, Let me introduce your Rules team for this forum. We call them the Infernals.MacallanLunatic CalmNot DicePoeticruseHaightMaudlinMootazThese fine soldiers of the shadow are here to answer your question and help you resolve any issues you have with the rules. Their words are official.
Next we go to a thread on combo strike and find the two posts that essentially end the discussion.

The answer by Lazlo...

Thanks Lazlo!!you understand my question...So...Instead of POW it, would sai P+S, is that correct?

There might be a clearer wording, but essentially yes.All that's changing in the Combo Strike is that instead of getting multiple initial attacks you only get one, and you add the POW of the weapon twice instead of just once to the damage roll.So a STR 8 model with two POW 4 weapons and the Combo Strike special attack (* Attack) would have the options of:a) Two P+S 12 attacks, orb) One P+S 16 attack

And after all that, the MOD MACALLAN whose word is considered OFFICIAL says this...

I think that you are all on the same page.

Here is where my Marauder is at, after about 3 hours work. As can be seen, some fine details are still required, and the basing needs to be done. Should have it all finished up by tomorrow. 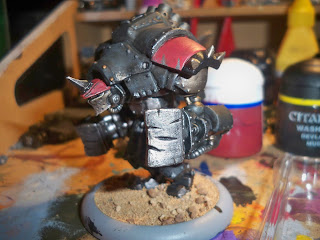 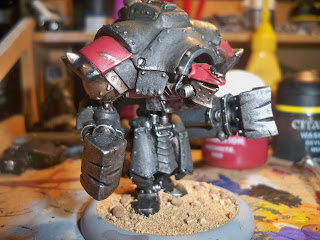 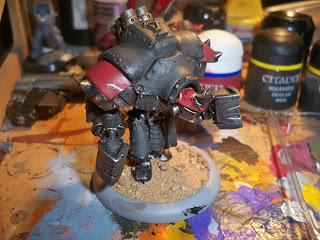 I am going for a "mid-campaign" look. Dirty, worn, and too busy fighting to keep things pristine. I like to think I have captured that. I hope the weathering comes out in the photos. I would really appreciate any/all feedback you readers have - Thanks! 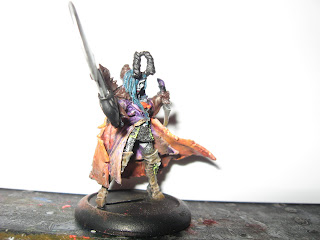 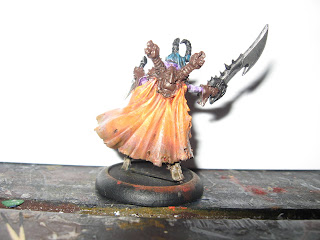 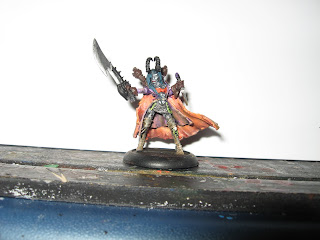 still a work in progress, i think i need to work on the face a little, its looks kinda wierd. i like the weathering effects i've done so far, trying to give the model a dirt and gritty look.
By CA$H at May 10, 2010 4 comments:

Ok work has begun on my first Warjack. It is a light Warjack armed with a chaingun and shield.

No clue what it does, but the model looks neat :)

This is WIP obviously, but gives a good idea of what it will look like. Marauder is under way

I picked up a Marauder warjack today, and I am starting work on it. This will be my first warjack, and I plan to test some serious weathering techniques on it, so stay tuned for work in progress pics. Here is what the Marauder looks like: 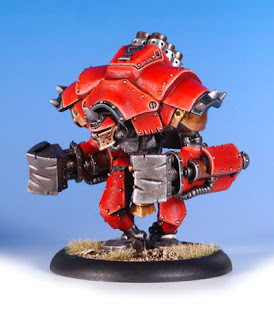 I plan to paint it with a lot less red, and have a green-grey main armor color, so more to come as I get it started.

My first ever warcaster is done! I know he isn't the traditional colours, but I like him. 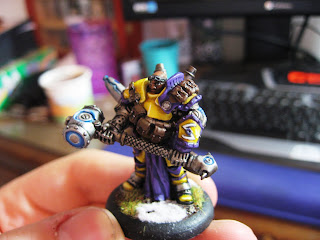 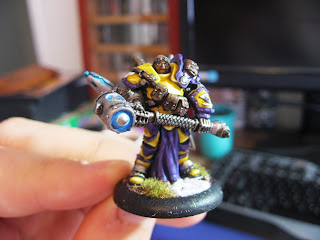 The colours are out there, but i think he turned out ok...I will have to work on getting or making a little lightbox for photos...

Ok so I spent a couple hours on my first Cygnar model last night. He isn't finished but I'm getting a feel for the colours.

Be warned...he isn't anything like the Cygnar colour schemes I have seen... So, Khador is my chosen faction, and here is my 1st painted mini for my force, the "Butcher of Khardov" : 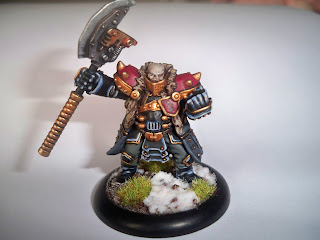 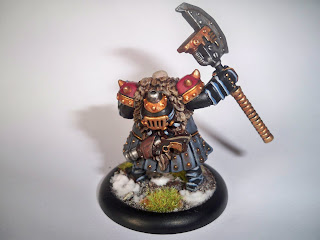 Looking for some feedback, as I lowered the amount of red I plan to use - and went more grey/green a la WWII Russian with the scheme. Thoughts?

Warmachine Mk2 has taken me!

This is how you write a rules set! I just picked up the new (Jan. 2010) Warmachine rule book and I am so impressed. First of all, it was only $30, and is ~240 pages of FULL COLOR. Second, it is so well written. Ambiguity is minimal - compared to GW rule books, it's a technical manual. The art is outstanding, and the models....where do I start.

They have really made some great models for this game. Now to be fair, I have always been partial to steam-punk, so there is that automatic attraction, but the sculps are awesome! I have decided to go with the models I like the most first, so Khador it is for me (Cryx is a close 2nd). I have a Battlegroup, Widowmaker box set, and "Butcher" on the way...so expect some pics soon as I start to build and paint them up.