Ok so a few of us have finally got on board the X-Wing bandwagon and are loving it. Relatively cheap to get into ($39.99 CDN) for the starter set makes it very attractive...and lets not be kidding ourselves, who doesn't like to collect cool little ships ;) The game plays smoothly and set up and take down is a breeze, much much faster than most boardgames and infinitely faster than any wargames. Not sure where it got labeled as a game with a long set up time... Anyways, here is some hot X-Wing Action, brought to you by Dice Devils! 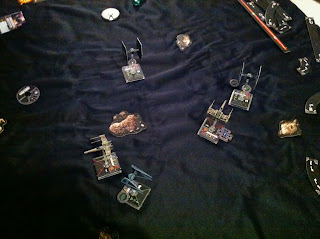 Click Here To Read More
By Joyous_Oblivion at September 22, 2013 2 comments: 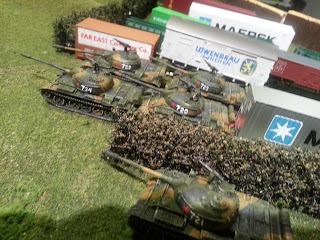 Of course the Lowenbrau Railcar is an objective!
So we had a Moderns game, with Mark playing West Germans allied with Rob playing (what else) Canadians vs my Soviet Guard Tanks.   The ruleset and army lists are derived from Flames of War version 3, and can be found here: http://stoppingtheredtide.blogspot.ca/   We were running about 2400 points.  You will note that all models aren't painted yet, but at least they are basecoated for the most part.  Rob of course, all his stuff was painted.  As usual, I'll let the videos do the talking (I've included our first Moderns test game video as well..)﻿ 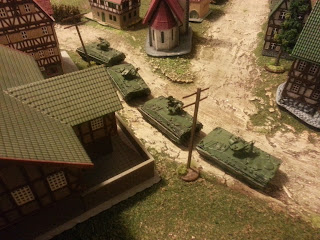 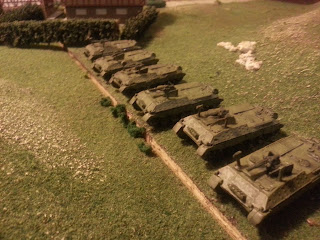 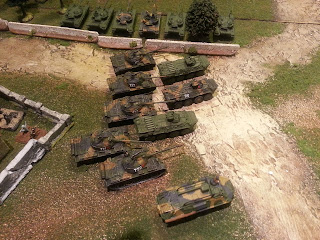 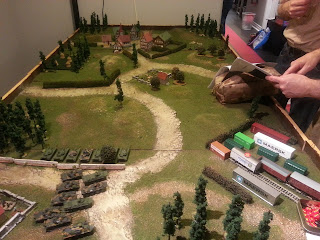 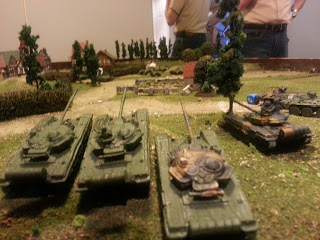 HQ T-80 (behind tree) and platoon of T-80s hull down on the make sure the enemy armor does not advance untouched.
﻿ 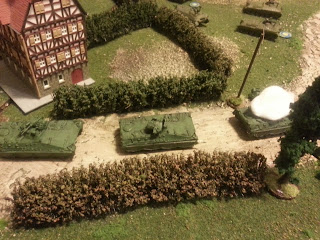 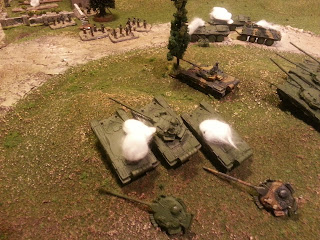 ..as my own troops advance (top left of pic) as I realize TOW launchers have a TONNE of range! 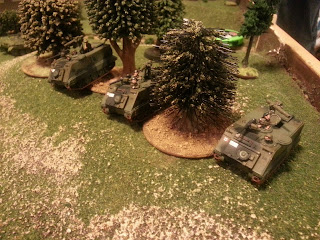 Rob's Battlefront M113s with QRF TOWs.   Note the correct license plates for West Germany!!
These vehicles would get popped by: Reluctant Conscript T-55s who needed 3 sixes to hit out of 5 shots, and got all 3!
Game 2
Our game, brought to you by the word Mitigate.   We were playtesting a new variant of the Soviet Command structure.  In short, now, when your CO is killed, the 2IC tries to take command, but every unit on the board counts as being pinned (armor included) as the 2IC slowly takes command, units unpin.   If both command teams are dead, the entire force counts as being pinned, but can still try and leave the board, or shoot to get some platoon kills in.   The previous method was:  If the CO dies, and the 2IC does not pass a morale, its game over.  This way there is more confusion, and the Soviet player can still "play for something" rather than pack his models up.

Below is our first test game, ages ago now.

Shortly after Historicon finished, I could not wait to play another event. After some talking with the other Devils, we thought partnering up with FdB would be a great thing to do in order to get some more exposure for Flames of War. After discussions with the owners and players in the area, we set a date for the 8th of September. I was super busy at work leading up to the event, but was able to organize most of what I needed to do via email and a few late nights thinking about how much terrain to bring and what the tables would look like. Playing only once in this venue, I didn't know what to expect from FdB. You can see more on the store here at www.boutiquefdb.com

The new(er) location is a brighter space, more room and the host store could not have been better. Sebastien, Francis and Thierry own the store as a hobby and more or less run it in their spare time. One of the key employees that helped with a lot of the small, yet important logisitics was Dave. So all in all, the support we received from FdB was awesome and well above expectations. More on that later! Let's get to some pictures and some of the games.