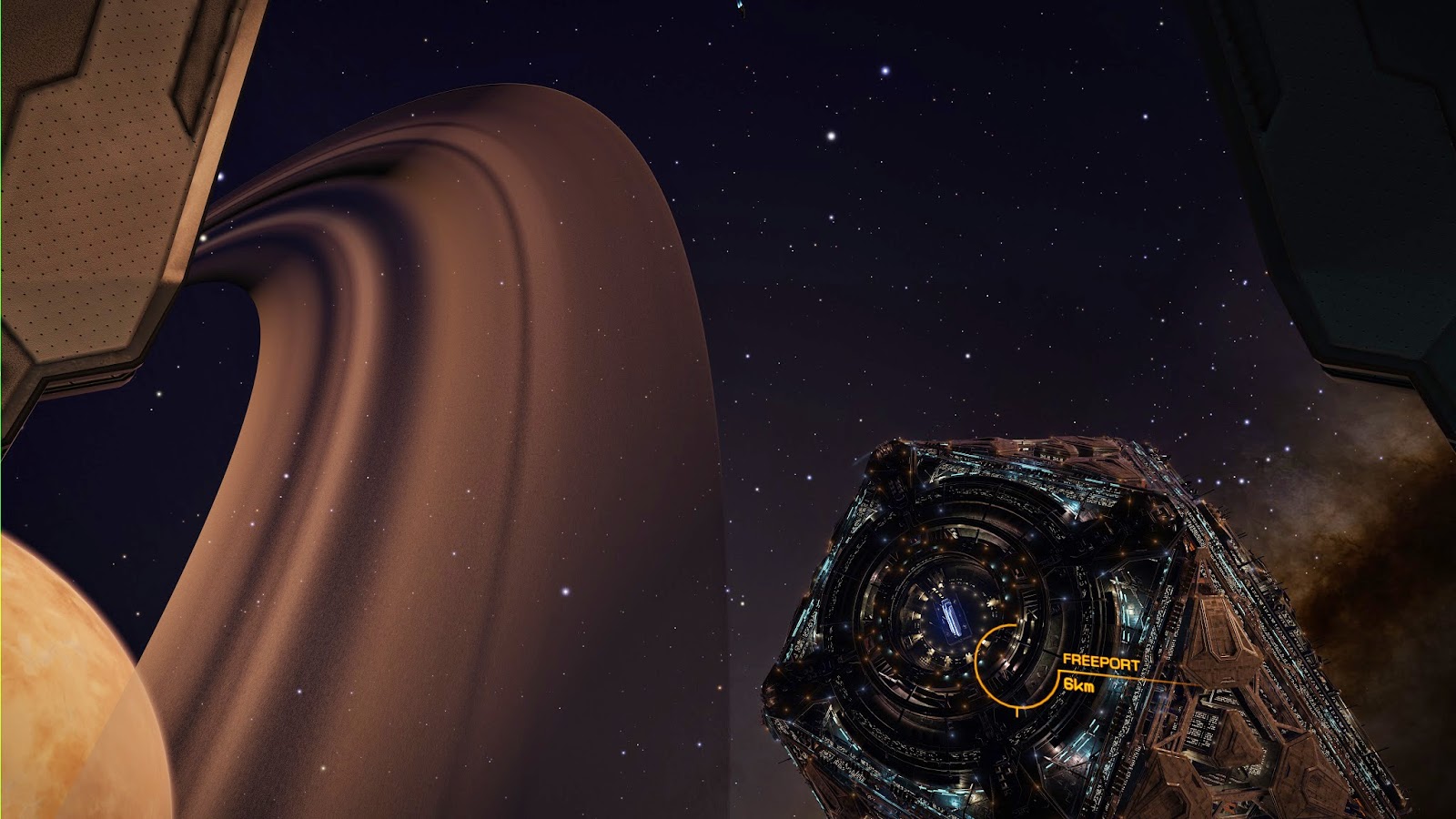 View out the 'Moon Roof' of my Eagle MK III, staring at Freeport Dock in the Anarchy system of LP-98-132.  Note the planet's rings.. which you can fly close to, and see they are individual asteroids.. and you can pick one.. drop gear and LAND on it if you like!
So now for something completely different, I have been playing some Elite: Dangerous beta lately, and got together with Clockwerks from http://clockwerk-warriors.blogspot.ca/  Its basically a space game where you can do what you want, except you have to fly your ship (rather than click stuff like in EVE) including docking from hollow cube stations.  We decided to get some testing in vs NPCs, though we can at any time play vs 'the world' and possibly get ganked by player pirates, especially in Anarchy zones such as Freeport. 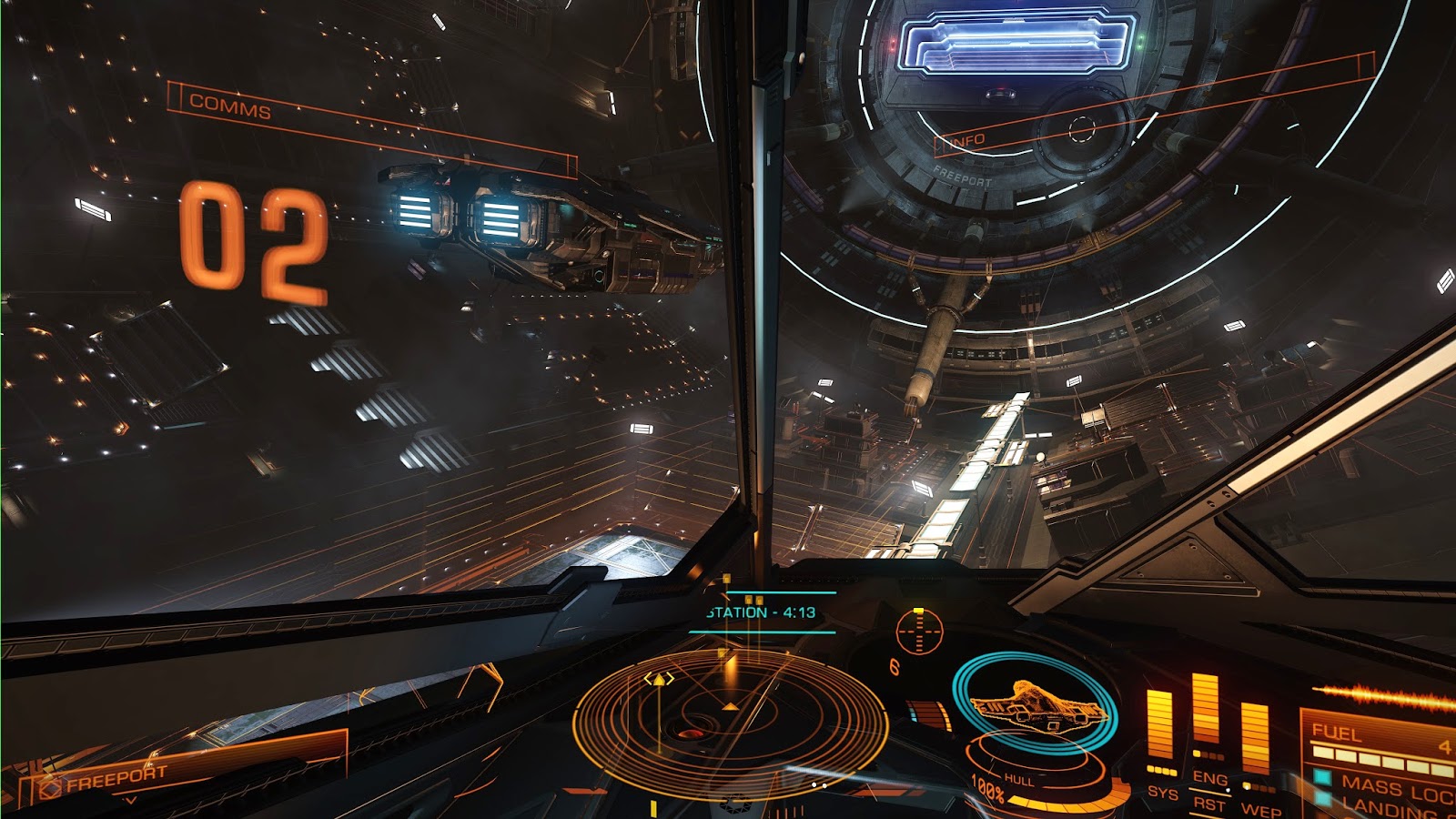 Speaking of, as I was lifting off to follow Clockwerks, I saw this Anaconda lifting off from pad 02.  Its a large ship, and bristling with weapons, we are in small light fighters.. 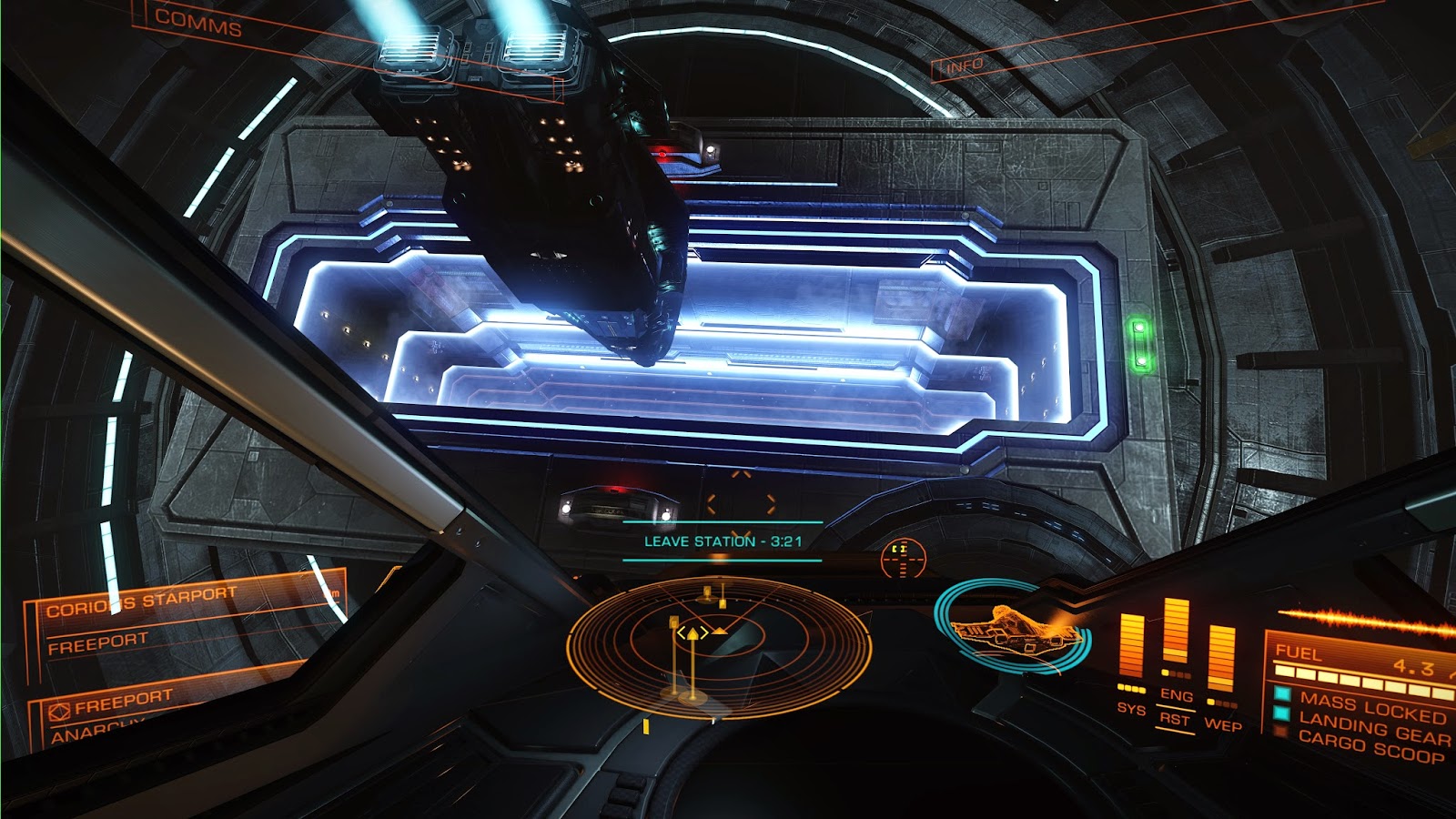 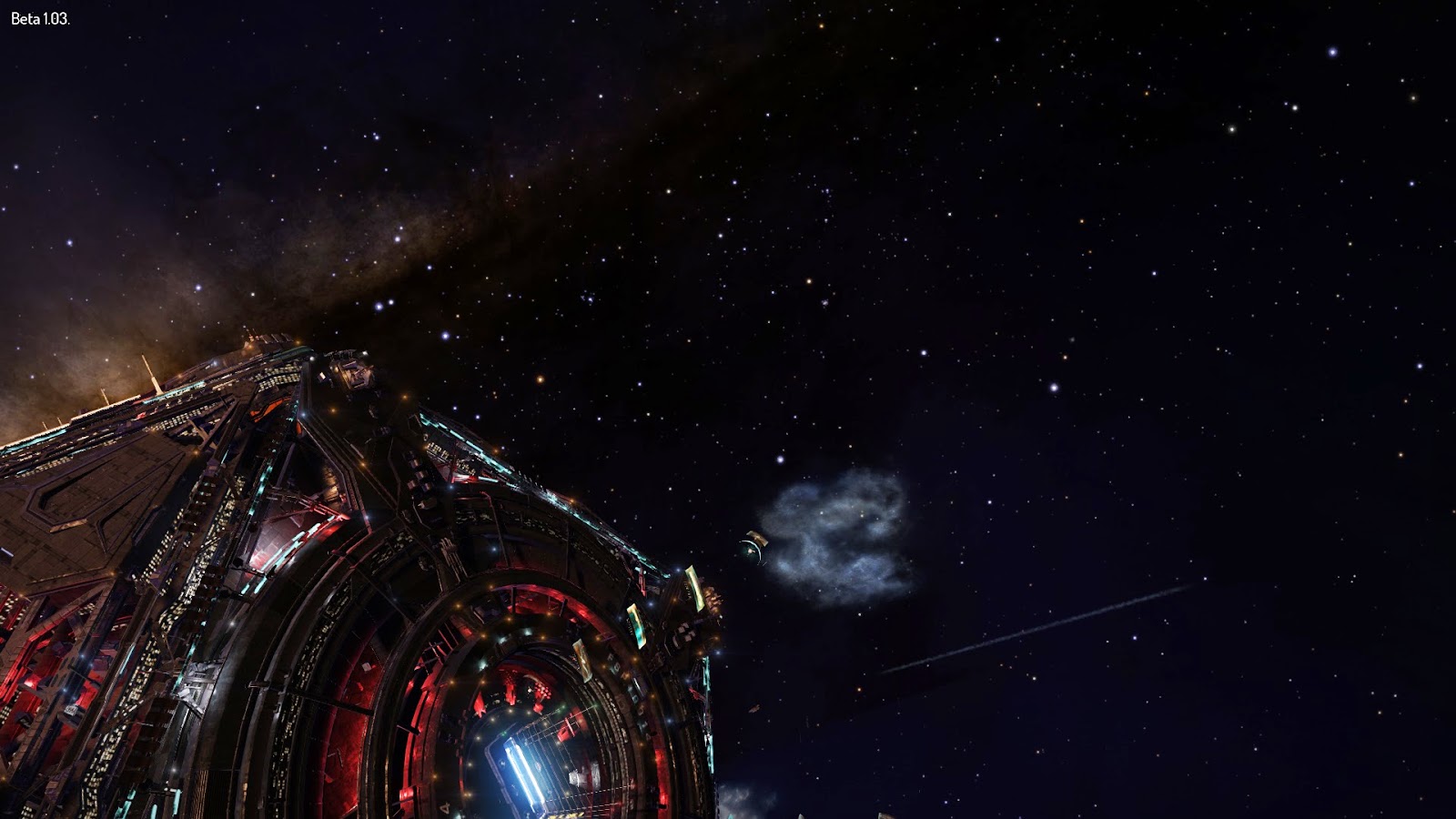 View from the outside, these things spin to make artificial gravity, and you can see the blue forcefield aka "the mailslot" where ships have to come in and out, and in the background the Milky Way and Large Magellenic Cloud can be seen.  The game has 160,000 of the closest stars to Earth in the game, and will procedurally generate the rest of the Galaxy.  The background stars are the ones around your current location.. so the constellations don't match our night sky in this case. 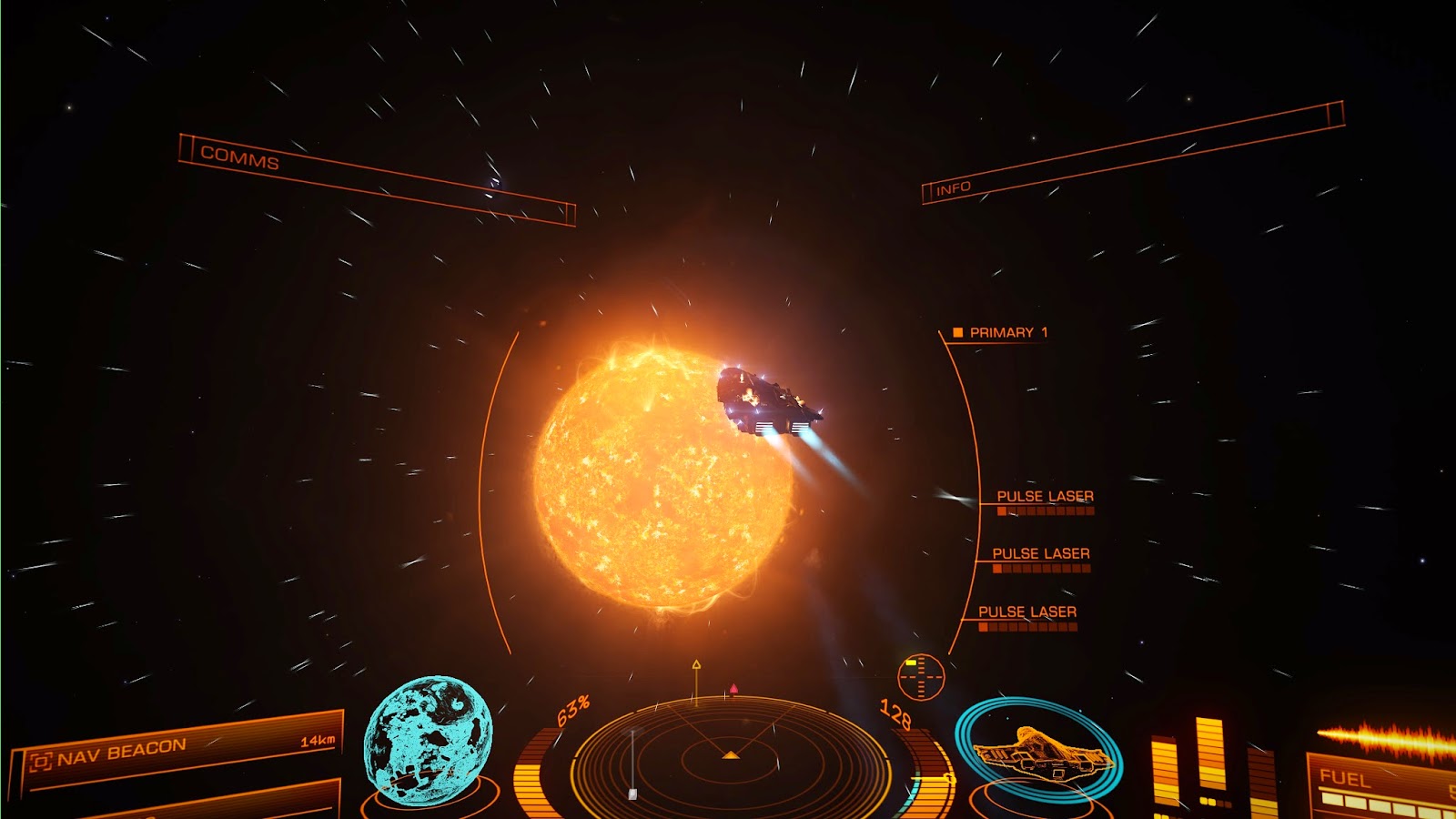 Well Looky Looky..
After a few rounds of killing NPC fighters defending a huge NPC capital ship, we came across an Anaconda (I like to think it was the same one we saw earlier) with some fighter escort.  I killed the wingmen, Clock engaged, and while it hit with a heck of a punch, if we stayed out of its front arc, only the turrets could hit us.  We kited it and finally killed the thing.  No loot though :( 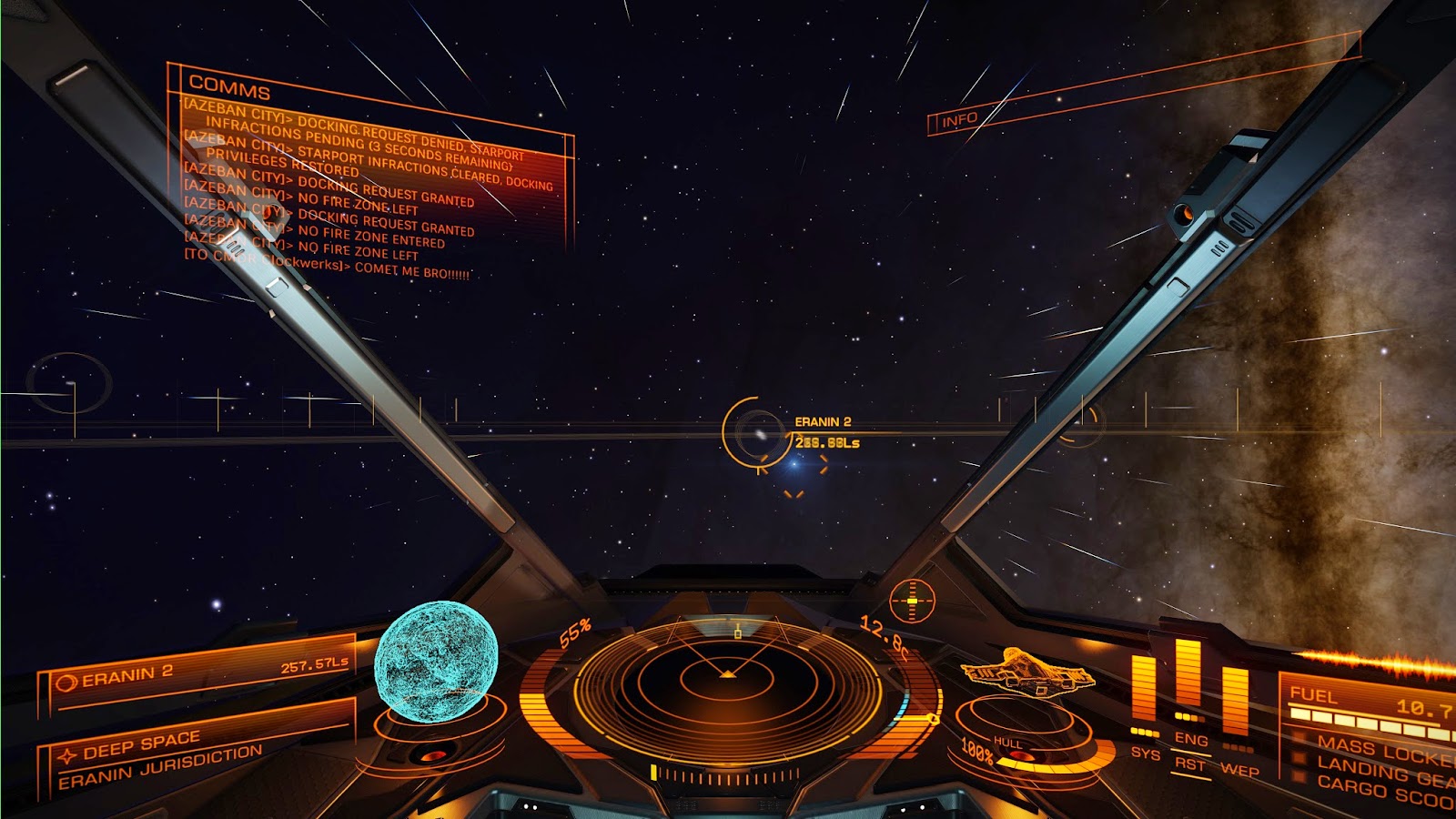 Unlike EVE, even when traversing large distances within a solar system, you can steer your ship and go where you want to.   Here I am travelling at 12.8 x the speed of light, following Clockwerks (small blue comet looking blue dot center of the HUD)    This is still in Beta, but is a freaking blast.  Recommended you run a joystick and throttle.. since this is more of a sim than a space shooter..
So yeah.. this is my guilty pleasure when not painting my Panzer IVs like I ought to be!!

After a successful first podcast, Episode Zero introduced our little group as we dove into Flames of War and other topics. We've just wrapped up episode 1 and it should be up this weekend! Myself, Tristan and Dennis dive right into Canadian Nationals, upcoming events and even some retro video game chatter.

We'd really like to hear from you, if you download this episode and have something to say, please drop a comment below. We look forward to bringing you more Canadian content and our perspective on all things Flames of War, tournaments and other interesting topics! Thanks for listening! 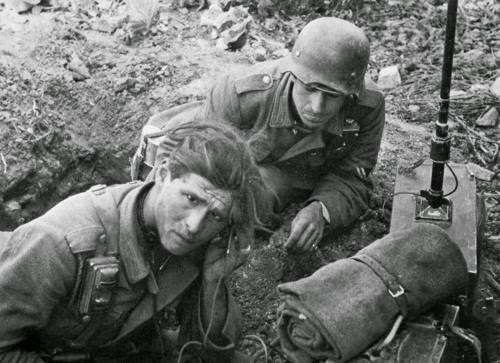 Here are some pics I took of Cdn Nationals.. just for giggles. 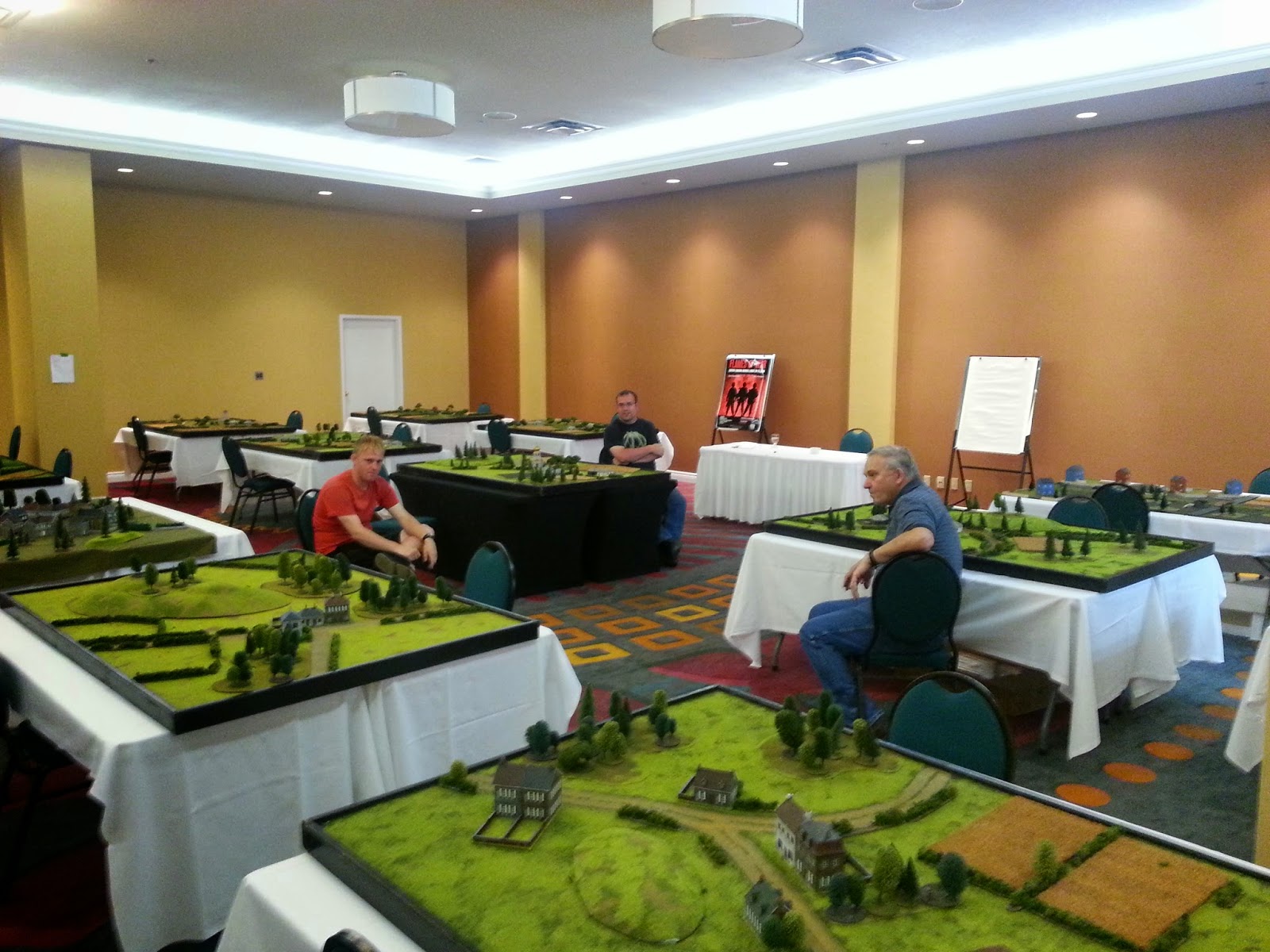 Table set up on Friday (Thanks Petawawa crew!)

Email ThisBlogThis!Share to TwitterShare to FacebookShare to Pinterest
Labels: Flames of War, podcast

A New Venture, An Old Army!

Hey guys, JO here again to show you what's been on my workbench the last few days. I was getting bored with my current Space Marine Bike Project so wanted to do something new.
After looking around my hobby room I found inspiration in the oddest of places, my box of incredibly old 40k models.
So started a plan to make a small (1000 points) Ultramarine army using only my old Rogue Trader Era marines.  Here are the first two guys I've managed to get done: 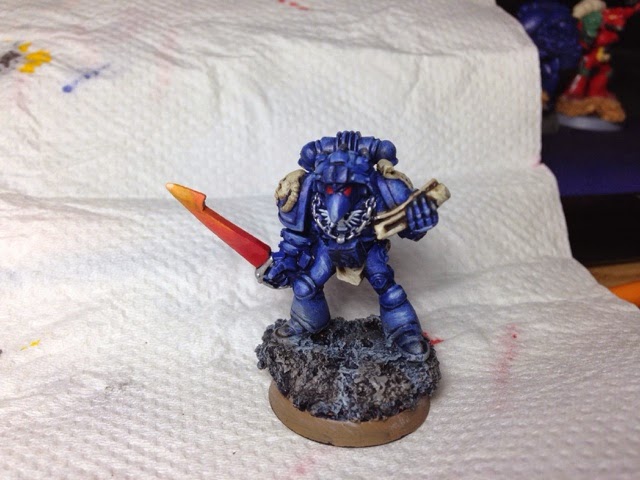 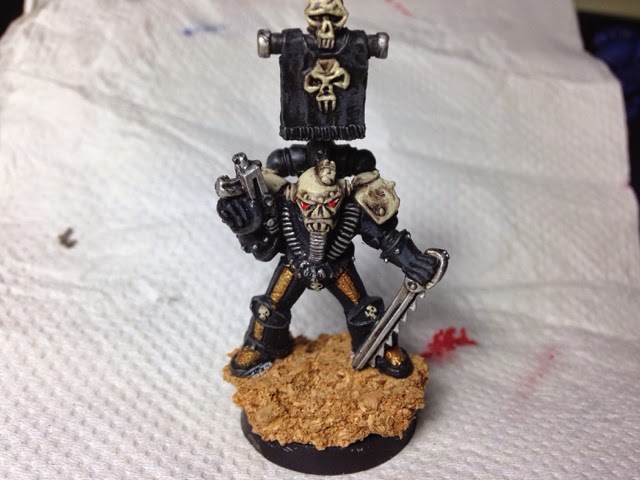 A chaplain and librarian to start, but I have a command squad based and ready for paint and 2 tactical squads assembled. I have to locate my old Mk I rhinos in my bitz closet but they will be next on the build queue.
Thanks for looking and you can follow more updates on my twitter feed @MartyRayHart
Cheers,
JO
By Joyous_Oblivion at September 10, 2014 2 comments:

This event marks the first time a Nationals has 'truly' been held North of the border. The title of the event was Eastern Canadian Nationals, the location was Ottawa. Downtown of Canada's capital city was the backdrop for a great event that almost never made it off the ground. A small group of players paved the way with their time and great risk to their pocket books to get this event out to the masses. 44 players total from all over Canada and the US came out to play in this event. Dave from Battlefront made the trip solo over the long weekend to ensure there were tables and terrain to use, a few out of town tables and terrain were also brought in to help out with the tournament. 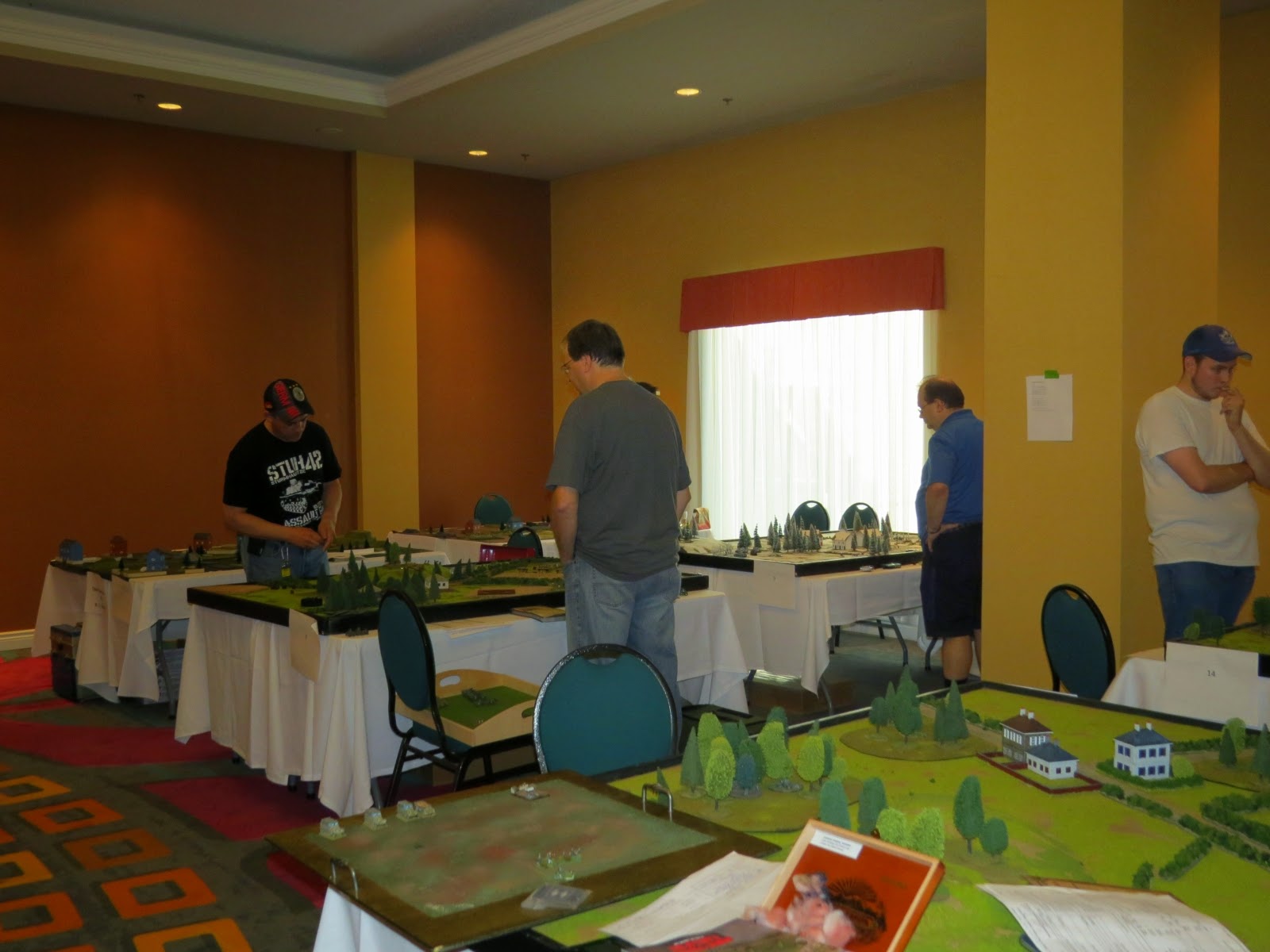 Players had lots of room between tables and chairs to sit on, a nice change from using a chair as a table for your army, dice, etc...