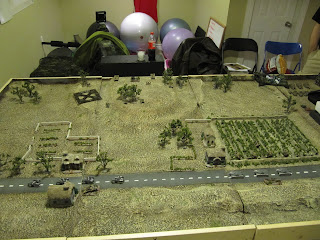 Rob Kelly's awesome desert table.. Afghanistan/Italy. Though the white exercise ball in the background reminds me of the Rovers from Prisoner...... 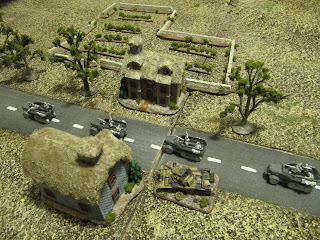 My escort unit is Panzer Grenadiers in the crazy french halftracks.. U304(f)'s Also.. anyone recognize those buildings with the thatched roofs? They are Marty's horrible Christmas dollar store buildings, with like 20 dollars worth of spackle, static grass and paint to cover up the snowdrifts on the roof!! 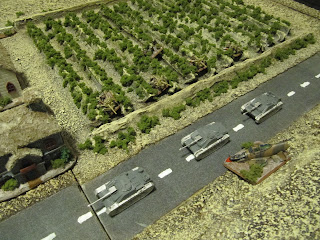 His target for Ambuscade? 510 points of StuG IIIG's.. his ambuscade unit? 6pdr's .. Here is hoping they do better vs side armor 3 than vs Chris' T34s last week. 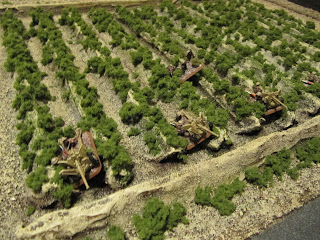 That grape orchard is perfect scale for FoW, and the Desert Rats look great on this table 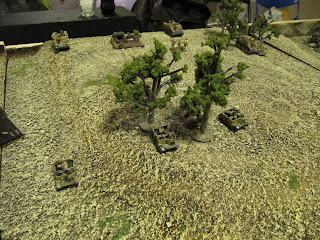 Rob chose Priest battery and the Recce Carriers as his on-table platoons, and deployed them on the hill overlooking the highway. 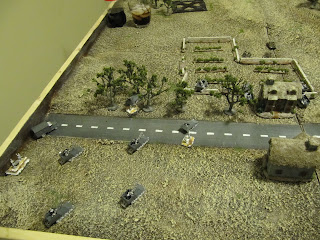 Recce moved his Carriers right up against the stone wall near the small farm, and I decided to get the SP Artillery set up ASAP as my first reserve unit. 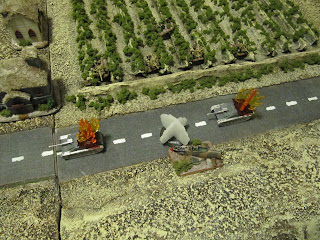 Ambuscade was deadly, killed 2 StuGIII's and the platoon command hightailed out of LOS to them, only to get killed by... 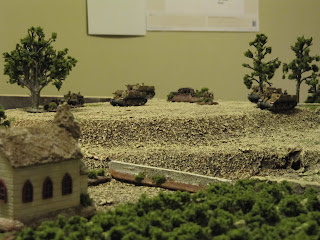 .. the Priest Battery up on the hill. I had placed him out of LOS to one observer team, but failed to spot the second one, who ranged in first shot.. One platoon down on turn 1, out of 4 platoons, and its a third of my points!!!! 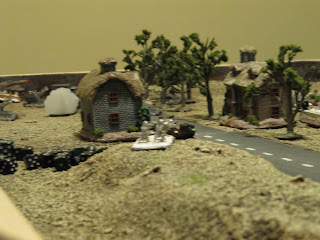 Side shot down the road towards my artillery.. they did nothing all game apart from pinning observers... which does nothing. 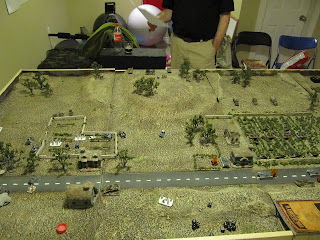 Game ends prematurely as my Marder's, AKA StuG Hotchkiss39's get vaporized on the far right flank, and I have nothing to contest that objective. Lose my CO tank, and promptly auto-lose the game, since I had 4 platoons to start, and Marders and StuG's were already destroyed.

Thoughts: Well, for the first game using Germans, they didn't do so hot, but losing 1/3 your points turn one will do that. My Arty did nothing, would have been better off with more tanks probably, like PanzerIII's or a few IVs.. who knows. Video below as always.