So, I promised to post about the tourney results so here it is. I actually won "Best Overall". Seriously! With my new Slaanesh marines! To say that I am stoked over it is an understatement - and it is fueling my desire to get my army painted up to 1750pts ASAP. There is talk of another tourney in February, and another in March - so there is motivation for you! Anyways, Ill keep the games brief, here we go.
GAME 1 vs Ultramarines - Played by "Manidow" 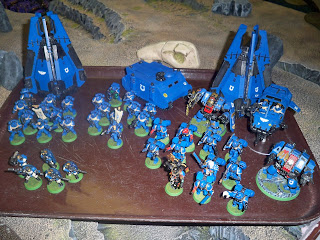 This was a tight 5 turn game with saw my noise marines actually hitting consistently and the pair of obliterators doing their duty and keeping both dreadnoughts busy. In fact, they popped the Ironclad as soon as it's pod landed. I won on the bottom of turn 5 by holding my objective and contesting his. Stellar army and great general to play against - very enjoyable game.
Game 2 vs Grey Knights - Played by "Tadao" 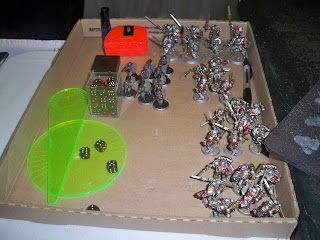 As you can see, apart from one Grey Knight unit and the stormtroopers, the whole army deep striked into my lines. I proceeded to focus fire on each unit and wipe them out, the Doom Sirens really coming to the fore here. The star of the game was Tadao's Brother Captain, who held up one whole unit and my Sorcerer for 3 full turns by making his "Bionics" roll two turns in a roll to stand back up and keep fighting. I ended up wiping his army from the board, but there was a lot of laughing and it was fun to see it through. Tadao's is working on a land raider for his terminators - I look forward to seeing it on the table.
Game 3 vs Imperial Guard (Royal Cadian Regiment) - Played by RKelly 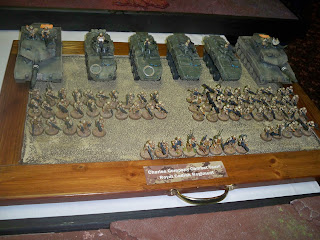 Fully custom scratch built vehicles (NOT based on kits) and painted up to reflect the current Canadian troops in Afghanistan, this army is beautiful. It was so nice that it was almost distracting to play against! This was my one draw of the day, and it ended with us each holding our own objectives. We only managed to get in 3 turns, so it wasn't a true test of either of our armies, so it could have gone either way. I look forward to playing against this army again soon! Another great game - 3 for 3 !
Game 4 (Final) vs Dark Angel Successors - Played by Grumblebunny 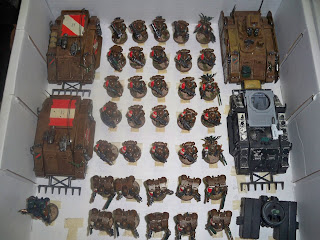 So my final game went 6 turns and again the combination of lashing units close and bunching them up, followed by 1 or 2 Doom Siren attacks really cleared the power armor from the board. That allowed me to remove his main threat, his 10man assault unit with chaplain and one tactical off two objectives allowing me to hold 3 and him 1. That wrapped up my games, leaving me at 3-0-1. No complaints here, and every opponent was a great guy to play against - and I hope to do so soon. I ended up winning the 40k basing kit, so I plan to put that towards a land raider for my army.
More pics of the tournament are available HERE
This week I hope to get started on some of my terrain for my new table, and of course I will track my progress here.
By CA$H at November 24, 2009 No comments:

I know I was going to post pics and battle reports from last weekends tournament and I will - I promise. But I read this today and just have to mention it. One of the many blogs I follow ( http://plasticlegions.blogspot.com - article titled "The Problem with 'Ard Boyz") wrote a commentary about 'Ard Boyz and the like in regards to the direction this over-the-top competitive approach to tournaments is taking GW. I can't help but agree with him 100%, despite having never attending one. The simple fact that the "hobby" part of GW is pushed aside (models do not require to be painted or even fully assembled at A'rd Boyz) is an ominous sign considering the prize support and promotion these events get - on top of the cancellation of all but 1 GW run Grand Tournament.

I'm all for local/Indy GTs and events- and go to any that are available in my city, but to promote these events as the "pinnacle" and "elite" levels of the hobby is frightening. Anyways, have a read and let me know what you think.
By CA$H at November 24, 2009 No comments:

Just got home and have to make a quick post - I earned BEST OVERALL! I won some swag, and it should allow me to flesh out my army with a Land Raider for free- MORE TO COME - Pics too!
By CA$H at November 22, 2009 1 comment:

So, I went to the local (read: Ottawa) Games Workshop for a couple test games at 1250pts for the upcoming tournament this Sunday, and I got 2 great games in. I only have photos of the 1st, against Matt Varnish's Tyranids. It consists of a Hive Tyrant, endless swarm (10) of termagaunts, 2 melee Carnifex, and 3 x 10 Outflanking Genestealers. Needles to say, a tough list (see my list a couple posts back). Here is what the armies looked liked at the start. 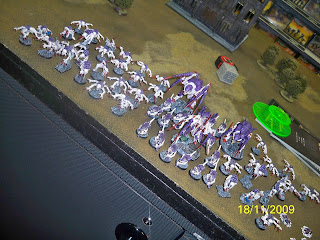 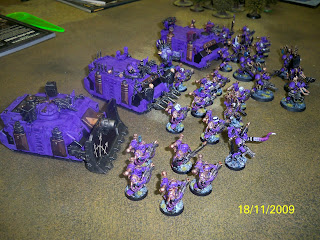 My Emperor's Children
The table was setup as per the upcoming tournament - meaning 4'x4'. It looked like this: 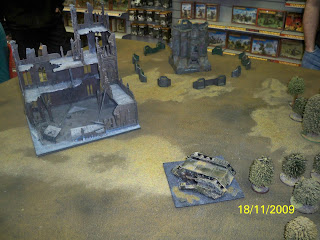 I must say the tables are stellar at my local Games Workshop. Now, how did the game go? Lets just say that Dawn of War deployment + 30 outflanking Genestealers = Noise Marines without much to shoot at - so my marines quickly wiped out the termagaunts and got stuck in with the Hive Tyrant. My terminators came in turn 2 nicely beside my marines, due to the personal icon - I love not having to worry about deep strike scatter! 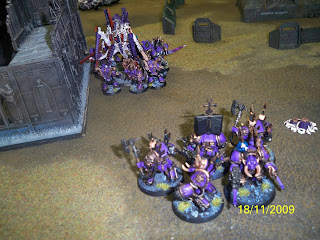 Now, what proceeded to happen over the next 4 turns was my 8 man Noise Marine unit keeping the Tyrant busy, while the vindicator and terminators wiped out one Genestealer unit, and the other 2 Genestealer units ate my 2 small 5 man units. They then came after the terminators to prevent the coming to the aid of the Noise Marine squad, however the BEST moment of the game came when 10 stealers assaulted my 5 marines a didn't kill a single man!: 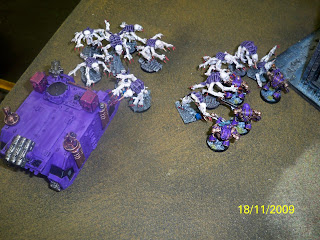 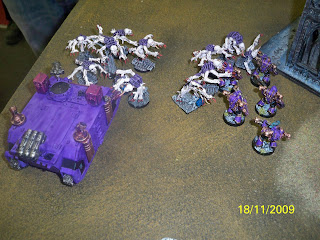 AFTER
Matt Varnish pulled out a win on the bottom of turn six with 1 lone genestealer left hold an objective - 1! Really close game that was a blast to play and had some hilarious moments - Thanks to Matt Varnish for another great game - Stay tuned for coverage of the upcoming Return to Locara: Tournament & Campaign
By CA$H at November 20, 2009 No comments:

So the top 2 players will get free entry to the GT - and I can play in my home city - nice! Now, what army to bring, and what list.....my head is swimming with ideas. Especially as I got some "insider" confirmation from some GW Canada higher ups that Blood Angels are indeed coming right after Tyranids - maybe I should fall to the black rage... but another new army? I have only just got 1250pts painted of Emperor's Children, and plan to take it to 1750-2000 point minimum - what to do, what to do....
By CA$H at November 20, 2009 No comments:

So, here are a couple quick pics of my Vindicator. I still have many small details to finish, but the bulk is ready for the table: 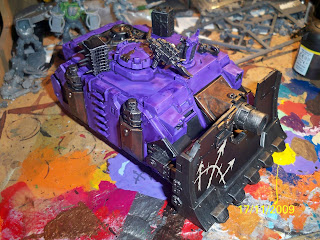 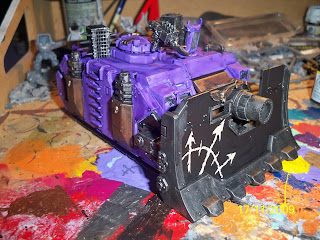 As promised earlier, here are a couple shots of the Obliterator and Sorcerer prior to being primed. I plan to paint the Vindicator tonight while these two dudes are drying.
So here they are: 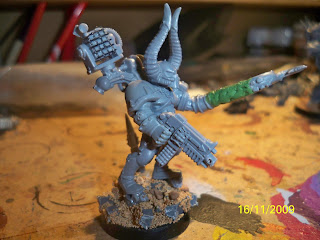 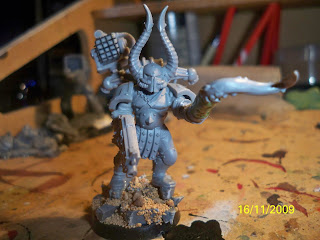 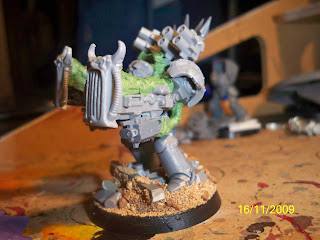 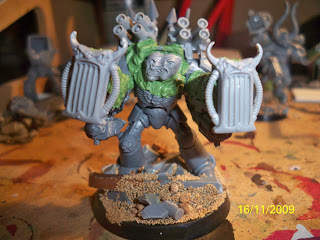 So, I haven't painted a fig in over a week, and not due to a lack of motivation. With the "Return to Locara" (http://gamesummit.ca/forum/viewtopic.php?f=21&t=2770)campaign and tournament kicking off this coming Sunday, I have plenty. Thing is, I have been down and out with a severe cold, not to mention my wife having laser eye surgery and all that it entails when she is healing up. I have less than a week to complete my 1250pt list, and to do so I need to paint up 1) Slaanesh Sorcerer in power armor (I converted him up from bits I already had) 2) 1 custom built Obliterator and 3) my Vindicator tank. Doesn't seem like a ton, and I am pleased that I have painted the rest over the past month, but time is limited. I only paint once the little one is in bed, so I can only commit to a couple hours a night. I estimate I will need at least 8 hours to complete the 3 models to a tabletop standard, saving fine details for afterward. I will post a couple picks of the sorcerer and obliterator tonight, prior to priming them so I can show everyone the conversion and "green-stuff" work. It will also serve as a reminder and point of reference for the remaining obliterators I plan to make.

I am looking forward to the tournament this Sunday. I have a freshly painted army, and the venue seems to be great - lunch is even provided at Pub 101! Nice touch there, as ordered in pizza and soda is old. I will have to keep going with my slaanesh marines, because the winter Game Summit ( www.gamesummit.ca ) is coming in soon, and the army will need to be up to 1750pts for then. As for what I will add to get the army up to 1750pts - I'm planning on getting up to 3 obliterators, fleshing out the troops a little more, and adding either a landraider OR a 10 man Raptor unit. Not sure which at this point. Anyways, expect some pics updated tonight. Till then....
By CA$H at November 17, 2009 No comments: 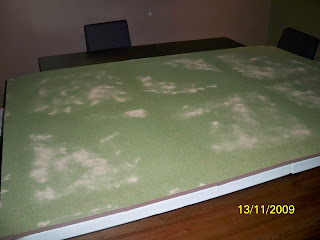 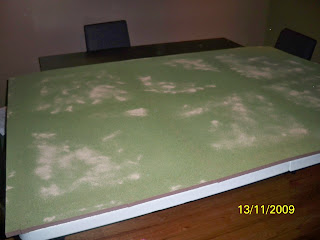 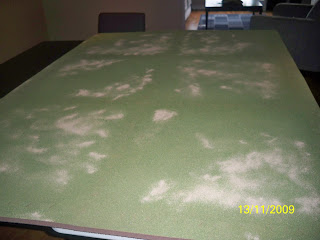 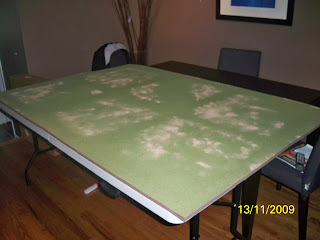 So, my "Xmas" gift from my wife arrived today, and I set it up in the dining room (rather than take out both folding table and put it up in the basement where I plan to use it) to see what it looked like. I must say for $75 USD, I don't think I could make anything better. On top of that, it tears down to a 2'x2' x 6inch stack, so it's really easy to store ie. keep out of my little one's hands. Anyways here are some pics!

It is rubberized flock and sand, and it hardly shed any when taking it out of the box, he mentioned a little may come off over time, but not much - and it seems to be true so far.
By CA$H at November 14, 2009 2 comments:

I have now completed the painting of both Rhinos, all the troops, and the terminators, pics will be up this weekend!
By CA$H at November 13, 2009 No comments:

So with the upcoming Return to Locara: Tournament & Campaign I am putting together a 1250pt list. Here is my list so far. Keep in mind I have play tested it 4 times, and it started out very differently. I had the Sorcerer in with the terminators (in termy armor) originally, and also had the CSM as a 10 man. Splitting them and removing the armor on the Sorcerer allows the Sorcerer to join any squad and give me another possible scoring unit. I have also been contemplating taking 2 more Obliterators in exchange for the Vindicator, but it has proven its worth in about 50% of the games (kill points wise) and has been a HUGE distraction/target in all the games. I'm really torn as to which is best. I plan to reserve the Vindicator always, because it can move on and shoot, and the Terminators will be deep striking because I have Icons on two units, so I won't have to worry about scatter.