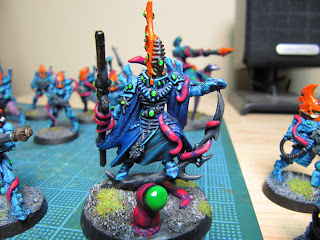 Well, locally we have the Los Deimos Campaign starting up in October, kicking off with a tournament, and ending with a bang in February at Game Summit, Ottawa's largest 40k tournament and Con. I thought what a perfect way to get my ass in gear painting my Eldar army I picked up off of Ca$h, who got it from Lothlann.

Since I cannot seem to do anything 'normal' except maybe my Tyranids, I decided to look into the fluff of the Eldar a bit to find a unique spin. Exodites would be cool, but I'm not a fan of painting Lizardman stuff, like Steg's and Carnasaurs, so thats out. Dark Eldar, well, since Jes Goodwyn is doing them, I'm pretty sure the models will kick a tonne of ass, so I came across a little story box on pg 54 of the Eldar codex, stating that the Eldar lament the loss of their original homeworlds, sucked into the Eye of Terror at the time of the Fall, and that these worlds were hellish landscapes, and I knew I had found what my theme would be: The twisted remains of the Fallen Eldar, gone over to Slaanesh and mutated beyond recognition under their armor.

The Tournament is Oct 24th, and is 1500 points, no special characters or allies allowed.

Here are some pics of what I've been working on so far, for my part in Tale of 5 Gamers: 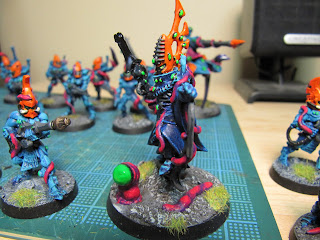 Another shot of the Farseer, converted from the Bonesinger model. 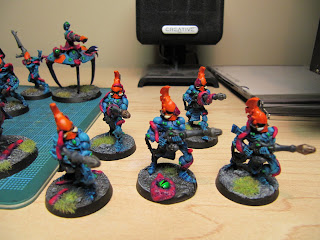 One of 2 squads of 5 Fire Dragons, tentacles made from greenstuff. Same with the Eye. 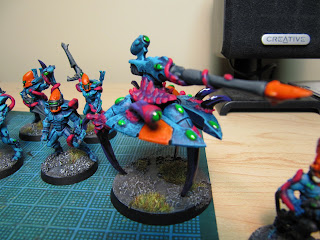 Brightlance platform for my Guardians. This will likely be switched to a Scatterlaser. BS3 is balls. 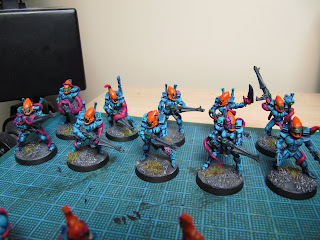 Guardians. I came up with this scheme by firing up DoW's army painter, and hitting 'Random' a bunch of times. A lot of em came up with lime green, but I really liked this one when it came up. The bright purple I just used for tentacles rather than trim. Bright colors are from the Vallejo FLUO line.. awesome looking, the WORST paint to work with ever though. Seriously, painting with maple syrup is probably easier.
By CA$H at August 29, 2010 6 comments:

Our Hive Cluster is Under Attack!

Well.. Tried the new list, and saw how effective the Tyrannofexes were vs Newborn's Eldar army. I played pretty badly, not keeping my big guys in cover, while trying to get shots on those pesky Eldar tanks.. though the dice gods abandoned me as well. It's really frustrating dealing with the GW FAQ that rules Shadows in the Warp has no effect on psykers inside metal/ceramic boxes, while my Hive Tyrant takes 3 wounds from Runes of Warding, and the whole time his farseer is inside a Serpent.

Right as I was about to leave, Tatz vs G-Ram had a deathstrike go off on turn 2, so I figured I'd record what happened, where it would land, and so on. Props to An00bis with the CLUTCH ringtone at around 1:50 ! 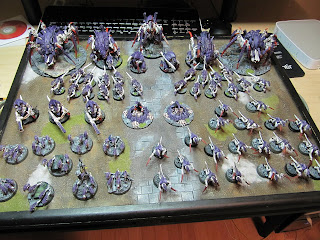 This is a new 1750 list, combining my 1107 pt Golden Marine XV list with the 2 Tyrannofexes I've been working on. Added the obligatory Tervigons and termagaunts 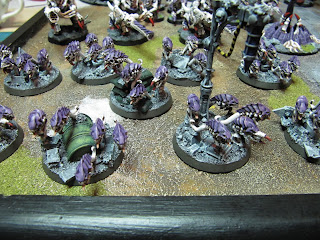 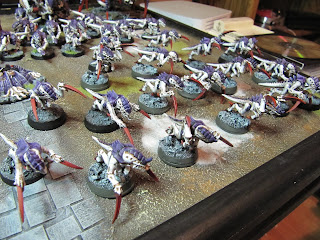 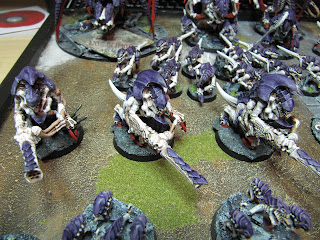 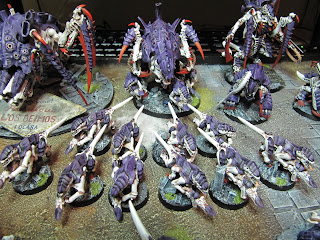 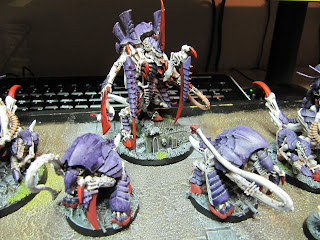 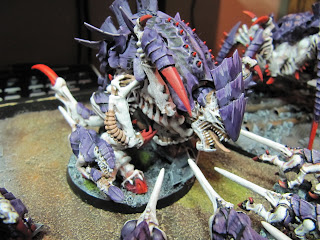 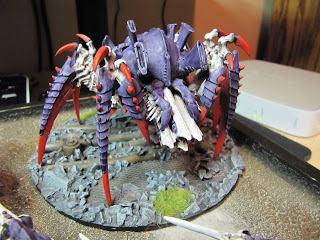 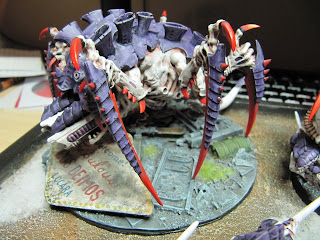 And this is my original T-Fex. Carnifex plus Trygon or Hive Tyrant upper body to make the extend-a-cab body, Mawloc mouth parts plus barbed strangler bits for the guns, large scything talons and a lot of greenstuff and you are ready to rock.

Here is the how-to-make video from way back. Note, the old head was red terror, now its Mawloc stuff: 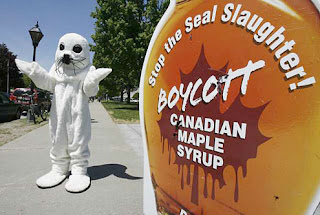 Well, we're in the House of Paincakes Blogroll now. What is this you ask? Just read the "Vision:" http://houseofpaincakes.blogspot.com/p/vision.html

I'd say more, but its not even 8 am yet. Although, looks like we might be getting 2 more writers on-board soon, so that rocks. Back to painting Tyrannofex number 2
By CA$H at August 25, 2010 10 comments:

Why have one Tyrannofex when you can have 2 for twice the price? 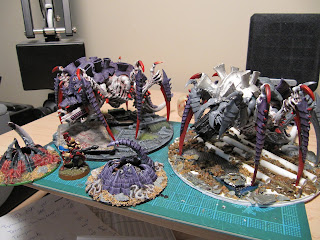 530 points of badass, 12 T6, 2+ save wounds. I made Catalyst (Feel no Pain from Tervigon) markers so I never forget which unit has it. THanks to Kairos Fateweaver at the Store for the second McRage orifice thingy. Soon-to-be-eaten Fire Dragon there for scale :)
By CA$H at August 23, 2010 4 comments:

Ok, I made up an acronym, To5G (Tale of Five Gamers), hope everyone uses it, i hate writing the whole shebang out every time!

So, going against the grain, as I was the outsider in this little competition, I have decided to stick to my gut and paint Warhammer Fantasy! I need a painted army and while my Gobbos... They look ok right now at and although they are at 1000 points, I am inclined to paint Empire, most of which I acquired from fellow Drunken Gamer, Lothlann!

So to start I am painting some individual guys to work out colour schemes, and these shall all be used in my Mordheim league I run with friends..

First up is an Ogre Mercenary in the colours of both my host city (Talabheim) and the Woodsman theme I was going to use for my Kislevites (green, khaki, brown, black). He is still WIP, but progress is being made (what's done currently was done last night). 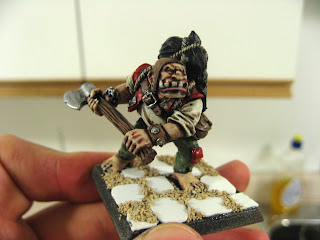 Email ThisBlogThis!Share to TwitterShare to FacebookShare to Pinterest
Labels: Empire, Tale of 5 Gamers

Didn't really see this coming. Last nights FNF saw me scratch build/convert my final Obliterator for my Chaos army, and then promptly hum and haw for a good couple hours as to what 40k army to start afresh. Alas, I do plan to build a loyalist marine army at some point (Space Wolves or Dark Angels) but I just find I can not get motivated to paint ANOTHER power armored army. So after much mass-debate, I was goaded into painting a lone Ork boy (actually a Nob from the starter set) and I enjoyed it immensely. Not to mention the fact he was knocked out in about 20 minutes. I then proceeded to paint up a Deffcopter - and wow - only took me an hour and I am hooked. I think, apart from the pure joy of painting the models and the idea of playing an army for just pure fun, the main reason to play Orks for me has to be this:

Quote from: Ork Codex, Page 49, Bottom Right
"Orkses never lose a battle. If we win we win, if we die we die fightin so it don't count. If we runs for it we don't die neither, cos we can come back for annuver go, see!"

There is just no arguing with that kind of logic!

Check out the rush jobs on the two models I mentioned. I should be able to knock out models fast and still keep a nice look (for dirty orks). 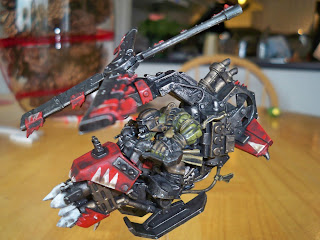 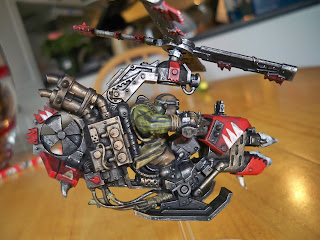 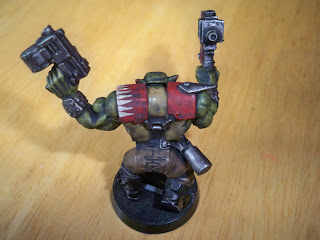 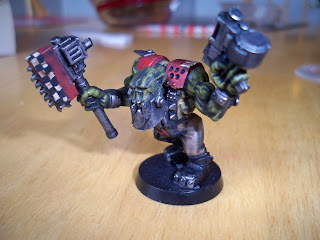 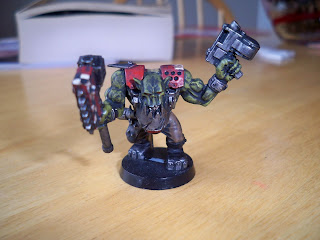 Hmmm, you get sick for two days, miss one tournament and you're shunned from the group!

Well hopefully I can get in on the Tale of Four/Five Gamers and maybe make up a game or two from the round robin next week :)

Seeing as this looks to be a 40k thing I'll have to pull double time I guess, because I am working on my Empire now, but my Blood Guard/Angels could be picked up for this endeavour, as there wouldn't be too many to paint!

So fellow drunken, and Sober Gamers, what say you, shall we make this the tale of Five Gamers?
By CA$H at August 19, 2010 4 comments:

Email ThisBlogThis!Share to TwitterShare to FacebookShare to Pinterest
Labels: Tale of 5 Gamers

So here is the deal: We haven't really been using this blog so much, apart from the awesome terrain segment by Orbital.

With no Grand Tournaments to look forward to, my painting has ground to a freaking halt

Time to change that up a bit.

The plan is to actually PAINT and chronicle the progress using the blog. We can meet up in a few months, get the round robin in again, etc.

We just need to settle in on a tournament we can set our sights on.

For me, I want to work on my Crone World Eldar, but since I'm using Tyranid bits for the tentacles and such, I kinda need to finish at least, assembling my Nids so I know what parts I can use. Therefore, I need to finish the 2nd Tyrannofex, and keep a few parts handy to reconvert the 2 tervigons back into carnifexes, since I reckon that were going to see a Tervigon/Tyrannofex kit sometime in the near future.

So tomorrow, I will be bringing the Nids, and working on them, then switching gears to my Eldar.

An Ottawa tradition: The gentleman's tournament where victory doesn't matter... only sportsmanship and presentation.

Personally, I think Matt V's videos are better, but this is more of a "from the top end looking down" perspective.

Golden Marine, it used to be Ottawa's 2nd tournament, with Cangames being the only other one. It started off with humble beginnings, 8 guys in a townhouse playing for beers, and has grown, 14 iterations later, to 40 people in a hotel meeting room.

A few traditions: It has, and always will be, 1107 points, the founder made his list of stuff that was painted and mandated that points limit! And it has stuck. Secondly, this was always supposed to be a "Gentlemen's Event" so these days, generalship doesn't even factor in at all. In this day and age of "competitive events" its refreshing to see 40 people have a blast, and be able to bring wacky things. For this year, it is a team tournament, but with random pairings each game.

1st Video is of armies as people were unpacking, the next 4 were my games. The game ones were short, we were very pressed for time.

NOTHING TO DO WITH TABLES! Video Bat Reps!

So, Forgot that I had some bat reps on my camera I hadn't up loaded, plus a game I had with G-Ram the other day, so here they are, enjoy: 2 x WFB and 1 x 40k

Here's a look at some of the terrain I'm useful recently, the techniques, and explanations of why I do certain things.

A short look at a very small Fantasy tournament I had at my place to see how people like the tables I've been working on.

Every Painful Detail, pt 20: The Crik
Water goes in the crik. Everyone knows that.

The Farm Table is close enough to finished that I'm calling it.

Here are two videos about the latest table, which is a farm.