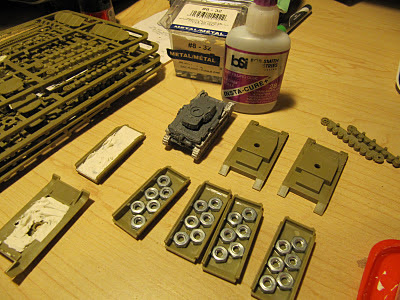 Well, despite the Late War 1500 pt tourney being one month away roughly, I am looking ahead to April's 1500 pt Mid War tourney up at the army base. Even though it would appear like Infantry got a boost from v3, I think I'm going to run a DAK panzer list. I have model-wise, 6 PzIVs, 5 PzIIIs, 5 PzIIs, then halftracks and a small Kfz222 Recon unit. My aim is two-fold: get them painted so I don;t have to run my Brits, but more-so to have them be compatible with Early War as well, hence the short-gun version of the PzIV. As you can see from the above pic, I have 1 BF PzIV and 5 PSC plastics. One thing I hate about all-plastic models is their weight.. they just feel so chintzy. Besides that, on a slope, if they are light they will just slide down, where a bit of weight will make the treads dig in a bit more, so I had to come up with a way to weigh them down, and I am sharing this with you now.

I went as cheap as possible, and the only monetary outlay here was a 2 dollar blister of nuts from the hardware store. The spackle you see is also from there, but I had this already bought for infantry basing. On the PSC tanks, I superglued 6 nuts to the underside half of the hull, while spackling the upper hull half. If you want to get heavier, you can glue 1 nut on the upper, but I think 6 is enough. I use the filler to, you guessed it, fill in the empty spaces in and around the nut, and I left a spot for the turret spike. I'm not a turret magnifying guy, but if I were, I would make sure my mag's are in before this step.

Below are both halves to each tank fully spackled. The elapsed time between the 2 pics was 11 minutes, so its very quick, the long part was waiting for the super glue to dry after dropping the nuts in. Easiest thing? Do like I did, superglue the nuts late at night, this morning I put in the spackle, and by the time I come home from work, I should be ready to glue the halves together and finish the platoon. 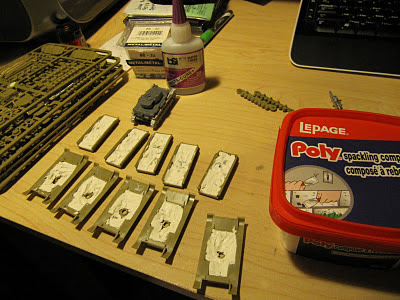 As for lists, my list I initially went for was the crappier of the 2 possible ones from North Africa, with the earlier MKs:

However, these have the crappy guns, though the PzIVs have bombardments.

THe updated list would be
2 PzIVF1
4 PzIVF1
5 PzIIIL
5 PzIIF
3 KfZ222 Recon unit. I might have to cut down on PzIIs to fit the recon in now with the better tanks.

I have to weigh down my Zvezda PzIIs also, and if I can find a spot, the PSC 251 halftracks will be weighed down too. I am thinking where the engine is I can probably fit a nut and spackle in there.
By Matt Varnish at January 09, 2012