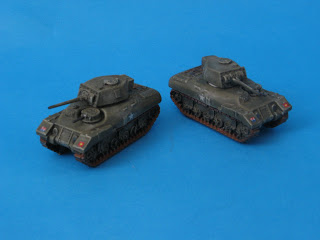 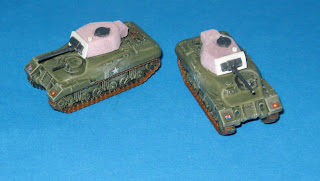 I don't like to have the same army as everyone else. And I like to use Canadian vehicles and troops. So, instead of using Sherman OP tanks, I wanted some Ram OP tanks, which is historically accurate as they were used by the Canadians from D-Day on. BF doesn't make a Ram kangaroo anymore, so I found some on eBay made by Axis and Allies and I was surprised to find out that they were the same size as FOW. Now Ram kangaroos had their turret removed to make room for infantry, so I had to scratchbuild the turrets. I used pink styrofoam insulation, some plastic card and some extra parts from my BF M10's (hatches and gun barrel/mantlet). I thought of doing the real Ram mantlet, but I'm not that skilled, and I figure the Sherman one will do. I will then paint in all the Ram bolts found on the mantlet. If it still looks bad, I'll just add some camouflage netting.

Here are the completed Ram kangaroos with the scratchbuilt turrets. The only glue that seem to be able to glue plastic and foam together was Uhu, but it takes forever to dry, so you'll have to wait another day for the painted shot of the turrets.

So far, I'm happy with the result. It gives me a unique vehicle that probably no one else out there has.
By RKelly at January 19, 2012