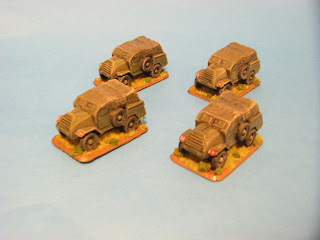 Matt Varnish likes my Canadian C15TA armoured trucks so much that he asked me to post photos of them. They were issued to Canadian units later in the war and they were all left behind in Europe to equip rebuilding armies like the Dutch and the Danes.

I've posted the four that I use for my Motor platoon that accompanies my armoured squadron. I also have one open topped version and once I get that one painted I'll post a photo.

I hope to buy some Ford Artillery Tractors from him as my guns are still without transport.
By RKelly at January 19, 2012