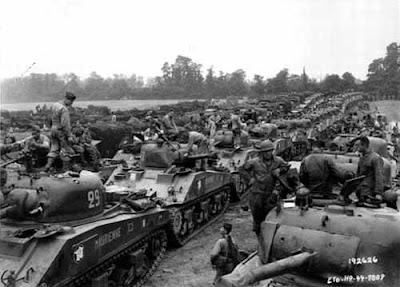 So I am an idiot. Why am I an idiot? Because I am going to undo about 2 months hard work painting my Late War Brits. When I decided to do my LW Brits in the Italy scheme, It was simply so that I could use already painted models (25 pdrs, 17pdrs, infantry, UC's etc) and simply add a few models, like an AOP, 4 M10s and halftracks to make Motor Platoons.

For some reason though I just cant get into it. I won some Grants a while back at a tourney, and was thinking to myself.. do I really need MORE Brit tanks? I already had 9 shermans, 9 Crusaders, 3 Churchills, 4 M10s, plus an entire EW BAR army. Also, I never seemed to use my Priests. Plus I wanted to run a "minor power" also, like Romanians, or Hungarians or some such. What I realized though, with chatting with Scary Biscuits and others over on the WWPD Forums (he works at BF) is that I could run basically a US force, but not have to paint the stupid allied star (AKA the USA star) if I just limited myself a bit.. namely, not running 8 million bazookas in each Inf squad, not using Radio rule, only 1 76mm Sherman per platoon, and run a characterful army.

I did some research and the more I read about the French 2eme Division Blindee (2nd Arm'd Div), the more I like it. The fact that they can run Priests is great, I have 4. They can run M10s, which I have 4. They can run bone-stock welded hull shermans galore, which I have. Halftracks I have plenty, I just need to add on the MGs that the Brits dont get. Only problem is right now the list isnt "official" as it still references Operation Cobra for Priest and Stuart pricing. Scary B aka Mike Haught says that it will get updated eventually, but for now I'll just run a generic US list from Fortress Europe, so it is official. The other crazy part is, I am going to try and get it ready for game Summit. From landing on Normandy to Liberating Paris, the 2eme Div Blindee took 25 days. I have a bit less than that until Game Summit. I drove to Petawawa today to grab what I couldnt find locally, like the Stuarts, who my good friend Marty says to never NOT use. He says everyone should run 17 of them in fact... so I had to get some.. 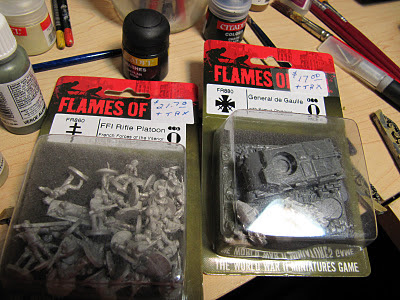 ... (above) I also got a Kepi-wearing CO in Charles de Gaulle (the Somua will be a re-recaptured BeutePanzer, that the german police units used to keep the Resistance in check, plus a blister of Resistance dudes (and chicks) Some of em are wearing turtlenecks, berets, and have guns.. how awesome is that? I'm going to intersperse them in my infantry stands to represent them joining their countrymen to clear the Bosche from their land.

The Free French had some weird units as well, namely a March Company of Chad, which is basically French Colonials from Chad, Senegal, etc that fought in North Africa, Italy, and now in their home country. This means I can paint one of my Armoured Rifle units with black skin. The officers were still white though, since its still the 1940s after all, but I think the unique markings on the vehicles, the Croix de Lorraine on every helmet and vehicle, and the french flag on shoulders and vehicles will make for a different looking US force at the very least.

Unfortunately, below is what needs to hit the simple green.... 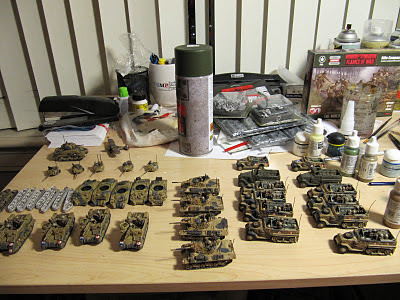 I got the fancy plastic rubble bases, a rifle co. box set to make Armoured Rifles x2 (hence the halftracks that need repainting in that pic) , so basically, I'll have enough models to run Armoured Rifles, Rifles, or Armoured Div. army.

I'm going to put together a few test stands, paint them up tomorrow, and come up with a list, and tomorrow will assemble all the infantry while the vehicles get Simple Greened. Vive La France! hahahahahaha

UPDATE I guess I had forgotten to post this last night. All day today I spent organizing my dudes into the 2 Armoured Rifle units, plus adding US crew to all my vehicles. That was this morning, this afternoon, I guled them all to the plastic scenic bases. I noticed that half were rubble, half had cobblestones, so I will split my two units using the different basing schemes. Also, like I mentioned, one of the units is Colonial, so will have coloured troops and white officers!! 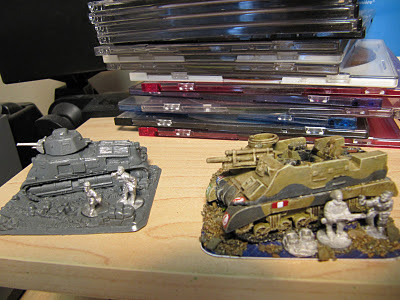 (above) Re-Captured Somua S35 with Resistance guys in front of it for objective 1, and since I am going from 4 to 3 Priests (Brit org to US org) I figured I'd make an objective out of the spare Priest. I recall seeing in my research a burnt-out vehicle that has "Here lies 3 dead French Soldiers" in an obvious attempt to sway any fence-sitters to rise up against the german occupation of Paris. I will paint that on the side. The Resistance Blister has some dynomite too, so I put those nearby, in case they want to deny this artillery to the germans. 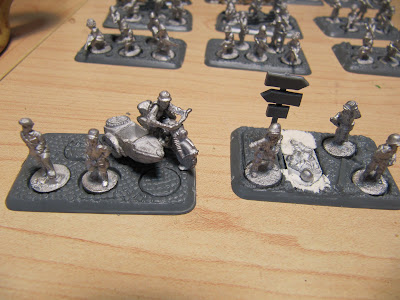 (above) to the left is my CO stand, it is Charles de Gaulle model, another french officer, and some messengers in a sidecar. To the right is my 2IC stand, 3 US-uniformed guys and a casualty model. 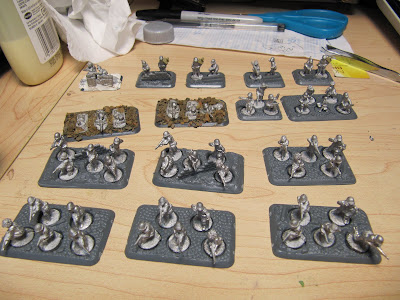 (above) Cobblestone Armored Rifle unit, historically, the French had less Bazookas than the US, and I wanted to be able to field this as a reg US force until the Free French list is offical. So I used standing guys and strapped on some 'looted' weaponry to make up the remaining 'Zookas I needed. Hurray PSC Halftrack box! This unit will be my Colonial Unit, the 'Regiment de Marche du Tchad'. 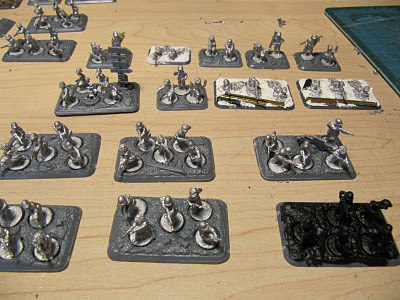 And lastly, this is my second Armored Rifles. Again, 'pre-owned' extra anti-tank weapons so I can run this out of Fortress Europe until such time as the list gets updated. I decided against intermingling my Resistance guys, instead they will remain distinct, or form the extra stands required if I run Rifles instead of Armored, plus Weapons platoon. In the French List they are confident conscripts, 7 stands for 65 points, very nice home obj holders! The black painted stand is my tester stand, which I will paint tomorrow morning.

Tomorrow Afternoon I play a game a the CLGS, and then its terrain frenzy for our 28-man tournament. I like how a year ago we had 7 people show up, now its 28 people!