Rise of the Tyranids 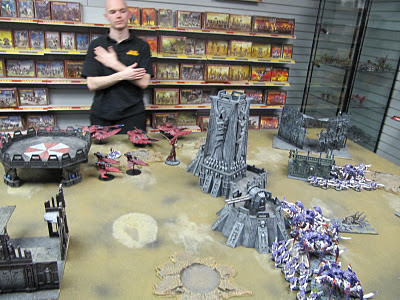 (above) 1500 points, Spearhead, vs my buddy Alex who is soon leaving to join the Army.

Shocking that this isn't Flames of War I know! My buddy Alex (In flames of war locally, he was the first to run SS Tigers.. in Mid War!!) is leaving town, going to Basic, etc, so I figure who else to shake the 40k rust loose against than him. It has been 15 months since I last played any 40k, since I even opened up my case! However, I had a good tournament list in my case, all printed out, so I used that.

I forgot quite a lot about 40k, especially that he would be going first, and what a Night Spinner does to Tyrannids. My deployment is below. 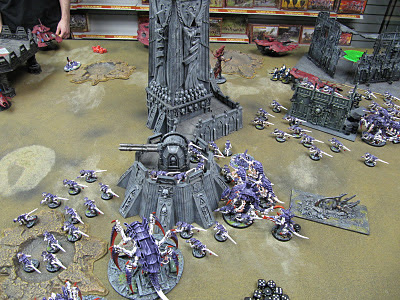 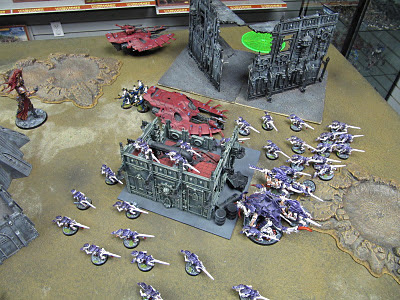 (above) Turn One and Two he jets stuff into my face, daring me to assault. He also drops a Web template over my hiveguard. TIL that that stuff stays on my models until I move!!!! 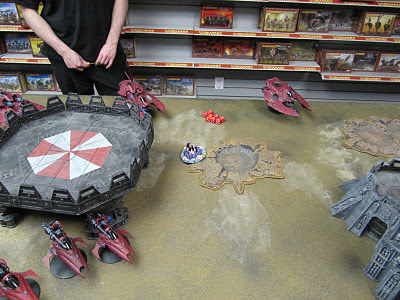 (above) he has a crescent of doom around the objective in his quarter.. how am I going to get in there with just troops? (He reminds me that Tyrannofexes can;t claim.. so used to FoW!!) 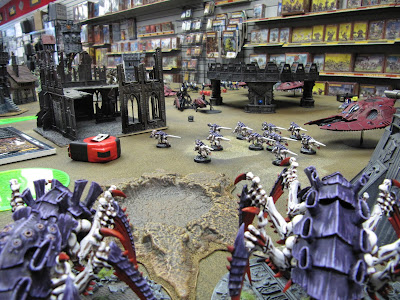 (above) my Turn 2, my Tyranno's have to kill off the Bright Lance Vypers, who have done 4 wounds to one 'Fex. Somehow I actually hit with my 265 pt beasts and wipe them out! 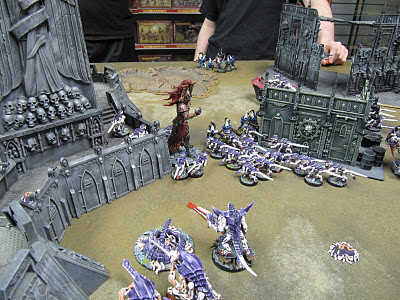 (above) Turn 3 sees the Avatar & Avengers charge into my Gaunt screen. At this point I realize that my Tervigons have a power to give them FNP and so on. 15 months is a while!! 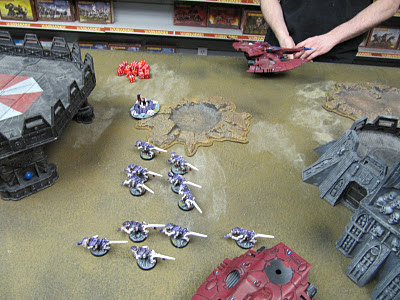 (above) after my Fexes take out the weapons from the Prism and Night Spinner, the last unit of Gaunts before my Tervigon crapped out rushes to contest his objective.. 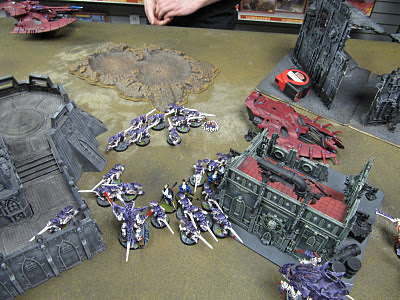 .. while the Catalyst Termagaunts hold the Avatar in place until the Prime gets in. twin Boneswords means take a leadership test or die if he fails his 3++ save. Needless to say, he rolled a 12 and died!!! 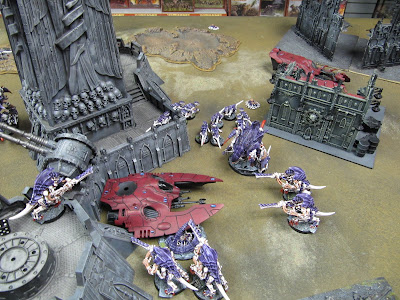 Alex is a sneaky bastard however, using my lack of knowledge, he moves his last 2 models.. gunless skimmers, in to contest mine, and tries to tank shock my Gaunts on his objective, and pray that the game ends (Its turn 6 by now) 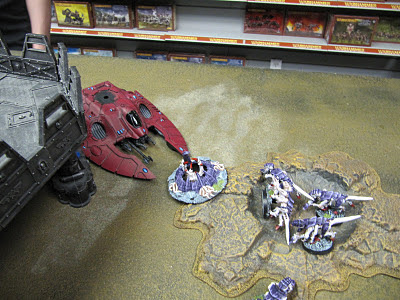 Sadly for Alex, the game goes on, and the Prime is able to carve up the gunless Prism, while it takes all my remainig hive guard to actually kill the gunless Serpent on my own objective.

Thanks for the great game man, and good luck at Basic. Remember: "It Ain't Trainin' if it Ain't Rainin'" hahaha
By Matt Varnish at January 24, 2012