For my first post here at Drunken Gamers, I'd like to introduce myself: I'm Corey, sometimes known as Orbital101, and I'll the token "Sober Gamer" on this blog. I guess that makes me the designated driver. Trust me; these guys might need one. :)
Last year I got the idea to start a 40k campaign. It's something I've been thinking about for a while, inspired by watching some of the really cool online campaigns in the region over the past 5 or 6 years. The Ottawa gaming community is very strong and positive, and I'm friends with many of the individuals who help make it great... so I felt there was a lot of fertile ground to upon which build a cool campaign. By late 2009, I'd conceived and launched "Return to Locara" (an homage to a campaign that a good friend ran a few years back) and populated it with 50 players, both local and not-so-local. 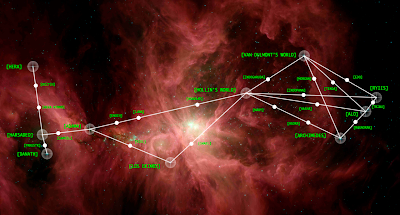 Observe the map of Locara: A few lines, some dots, a high-rez photo of Orion
and you've got a playing field for an online 40k campaign.
Rather than go into the particulars of the campaign itself, I'd like to share a bit about what I want the campaign to be and, in doing so, explain some of the decisions I made along the way.
As few restrictions as possible
No matter what kind of great ideas may be hatched for a great, operatic 40k campaign, the reality is that players have day jobs, schools, families and commitments to normal things. Whatever grand visions may be possible, they must be trimmed and contained so that normal people with normal lives can be part of it.
To make a campaign work with so many variables, I felt it was important to impose as few limits as possible... even at the expense of some potential campaign "ideas". My only real restrictions on the players are: In order to acquire points which can be used towards campaign goals, they play one specific army of their choosing in one of the Games Workshop 40k-themed game systems. There's no minimum requirement for how many games one must play, no restriction limiting players to only play against other campaign members, no set point values or army lists, and no schedule for when games need to be played. I want to get as many people playing as I possibly can.
I got this idea from the Eye of Terror campaign of a few years back, where people anywhere in the world could register games and get credit for them. If GW had imposed the above-mentioned limits on Eye of Terror, participation would have been exponentially less and the buzz around it would have been considerably lessened. It's an important lesson; the campaign is for the players to participate in, and all rules must serve that purpose in one way or another.
So, essentially: Let people play what they want to play whenever they can and don't give them a hard time if they can't play as often as you'd like.
Offer lots of ways to play
The garden-variety 40k game is the currency of a 40k campaign, and Return to Locara is no different; playing games is its backbone. Even so, I was inspired to add several other gameplay options to the mix so that people didn't get fatigued by the endless cycle of "play a game, get points". I introduced various "events" into the RtL timeline which altered basic gameplay with interest and even humor (i.e. the creation of a "Death Star"-like defense station or even a transport of volleyball-playing slave girls whom players could visit). Secret missions were also issued to most players so they'd have unique choices and mandates into which they could put effort and be rewarded for. For instance, a player might receive additional points for claiming and holding a specific planet, or another might get bonuses for waging war against a specific enemy. As if that weren't enough, early on I added Xbox-style "Achievements" for doing certain things, such as being the first to claim a particular planet or defeating X number of a particular enemy race... but also for less-goal-oriented things such as drawing a picture of your army in MS Paint or writing fluff about your army's adventures. Lastly, I even added what I call a "LIVE TO WIN" challenge every week, where the player who completes a number of tasks I list can get bonuses that count towards campaign goals.
At the time I was putting the ideas for RtL together, I was also playing World of Warcraft semi-regularly. I'd noticed that Blizzard works very hard at making sure that WoW players have a wide range of gameplay options: Don't like playing this way? Do this instead. Don't like that? Do this. Don't like that either? Try this. The player will never say "I'm getting sick of the same thing over and over" because there's always something different for them to try.
Make it social
When a campaign is full of people trying to do things for their own personal gain without collaborating with each other, one of two things ensues: Most of the people who play for fun will fade away and disappear from the campaign over time, and the people who are left are the Win At All Costs types who revel in the experience of beating others rather than playing with them. For this reason, I created two Factions: Imperials, and Xenos/Heretics, and divided the players (somewhat) evenly between them. My hope was that it could create a social environment where team spirit could be fostered and the discovery of how to work together to more effectively. Friendly taunting and vying adds a lot of humanity to a game, as does back-slapping and cheering for your Faction-mates. Without teamwork at the core of the campaign, I believe it'd degenerate into a simple characterless math-battle. 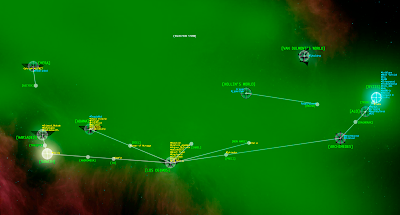 Locara in trouble: The names of players participating in the campaign are positioned on the map to represent movement and claiming planets. As they play more real-world games, they get points with which to do things on the map. Don't mind the green cloud: This week the Locara Sector is being gradually destroyed by a radiation storm.
Don't obsess over making it fair
One of the biggest challenges for the creators of Warhammer 40,000 is asymmetrical balance; Putting two armies on the table that have completely dissimilar composition and resources, and making it fair. As most 40k players know, the game is traditionally an approximation of fairness, but can't promise to deliver precise balance. Though debates rage on about how fair 40k is, most players can't even define what that looks like... much less agree on how to achieve it.
When I think of asymmetrical balance, I think of an old, old video game called (something like) Wolf and Geese. The game was played on a grid. One player controlled 12 geese and the other controlled a single wolf. It was a turn-based game in which the wolf could eat a goose if it intersected with it, but if the goose player completely surrounded the wolf, he lost. This, to me, is the best example of asymmetrical balance in gaming: Can you say if the wolf or the geese are overpowered? Or if they're balanced? There's no reliable way to measure that, so the answer is no. Only the averaging of player experience over a long timeline can hint at whether it's weighted towards one side or the other, but even then there's no way to establish an absolute.
In the Return to Locara campaign, I added numerous game factors (as I mentioned), thus providing the players with more ways to achieve their goals. Unintentionally and quite unexpectedly, however, those factors helped make the game more fair as well. At first I feared that adding several bonuses, rules and constraints would create imbalance (more working parts, any one of which could fail and all that), but what I found is that more influence and effects which attempt to achieve balance create an average gaming balance which is closer to absolute fairness. If you have only two factors - one positive and one negative - then the lack of perfect balance is very noticeable. If you have dozens or hundreds, the average gets a lot closer to the desired "middle", or balance. This is part of what makes 40k work despite several broke rules; a game rarely ever depends solely on one Terminator in a fist-fight with one Dark Reaper, even though they bring different power to the table for comparable points.
This might sound like a considerable pre-occupation with fairness, but it actually is very freeing. I don't worry about balancing the rules perfectly; I just aim all the rules in the same general direction and let the law of averages figure it out. If one special rule is a little skewed, it's balanced by a plethora of rules which aim for fairness. The effect of human error in balancing the campaign is mitigated.
Just to make sure I covered my ass, however, I made this the first comment in the Return to Locara rules: If you read nothing else, read this: The Locara Campaign is going to be unfair. 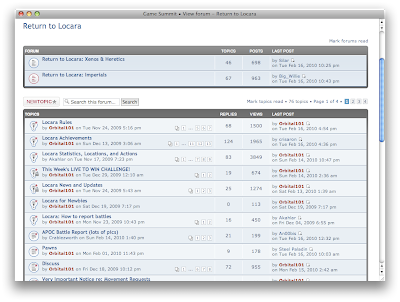