'There is no Shelter, from the Steel Rain' 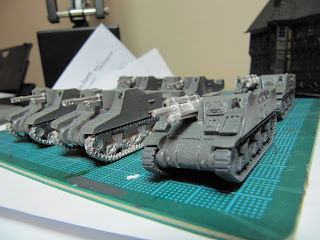 So, as the title suggests, I have got my hands on some artillery, in the form of 4 Sextons and 2 priests. For now, I am using them as 6 x Priests from the Royal Horse Artillery, for much needed fiepower. I acquired the Sextons in a trade with Spanky100, for my Chaos Dwarf converted WFB army, he had 2 late war FoW army boxe sets: the British 7th Armoured and the 21. Panzer Division, "Rommel's Zirkus" of looted vehicles. I have ordered 2 more regular priests to make an even 4 priests, but can add in the 4 sextons 'count-as' when I want to get saucy with artillery.

I aso finally finished with all the little details, the game winning 2IC and his trusty Carrier, plus the Recon Squadron, painted in the proper 51st HD markings. I think they look great, but it was very time consuming to get everything done, like the bog-down gear on the back, the machine gun ammo boxes, etc. Pics below. 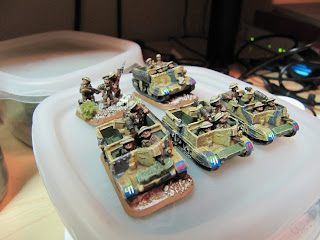 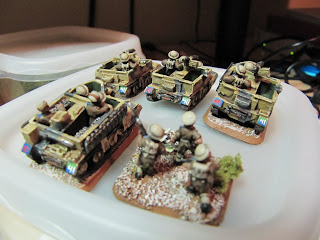 Email ThisBlogThis!Share to TwitterShare to FacebookShare to Pinterest
Labels: Flames of War