Friday Night Fights is over again for another week and I got enough photos for an actual report!

Played Hasty Assault with the Germans on the attack...
Turn 1:

On the Left Flank (over the course of the last couple of turns) PLEASE SEE FOLLOWING PHOTO:

Big Strelkovy platoon finally unpins and move up towards the Brummbars.  Nebs and Goliath make short work of them (see blood bath below).  They are so depleted their assault on the Brummbars and infantry in the compound (top right) utterly fails and they are forced to pull back with only the 1iC and Bat Kom still alive (and the 6 stands holding the left objective).  45 mm AT fire wipes out the German Pios with their 1iC and bails a Brummbar after the Brummbar and Shrecks kill the advancing Su-57s.

Casualities:
Soviets:
IS-2
Su-57s
2 severely depleted infantry companies pass all of their Morale checks and are still in the fight! 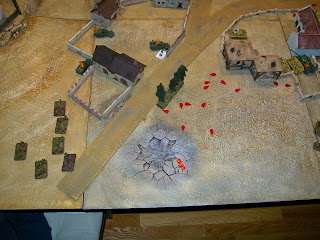 On the Right Flank (over the course of the last couple of turns) PLEASE SEE FOLLOWING PHOTO:


Lone Is-2 tries to flank the KT and 2 Flamethrower teams pop out of the treeline with 4 infantry stands.  FTs kill the KT outright.  Infantry assault the tankettes and are wiped out to a man by 9 shots in DF.  Soviet Infantry stay in the fight after getting below half.  Germans counter and kill the IS-2 after bailing it with their own FT and then move into the treeline.  Tankettes flank right and take shots and AT guns on the ridge.   But the Soviet return volley fire is devastating killing 2 tanks and bailing the other who ultimately flee the board.  Infantry are reduced to 1 stand by Soviets and are destroyed in an assault. 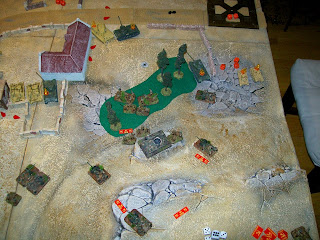 With their 1iC under a white tarp the Germans fail their Company Morale and the game ends.  4-3 Soviet win.  What a blood bath.  Not many pts remained on the table after that one.  Large Soviet Co. had 5 bases left (down from 28) and the smaller one had 4 bases left (down from 18).
By Pripyat at October 29, 2011