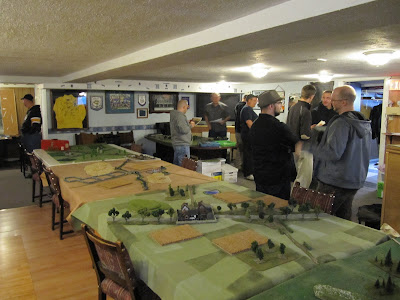 We had the pleasure to attend the Ottawa Miniature Gamer's Flames of War tournament, or OMG TOurny for short. When we had Skirmish a few months back, 4 or 5 guys from OMG came out, and now we return the favor. It was Late War, 1500 pts, not theatre-specific. I decided to not take the German list I have been playing for 3 months, and bring the King Tiger list instead. In fact, I had this planned for many months, and to "spring" it on folks. However, when I got there and saw that there was a strong contingent of players from CFB Petawawa (Army base 2 hours out). This meant a LOT of AOP's and Commonwealth artillery, which naturally crush top armor. There was also an army with 11 Churchills, which I would face game 1! 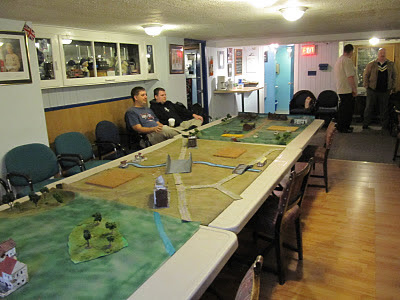 Here are some more shots of the tables. 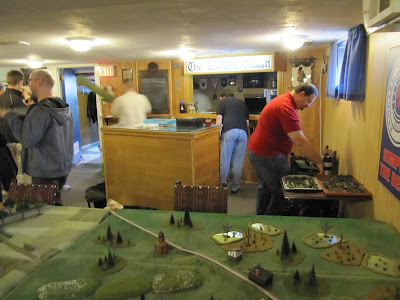 The venue was awesome, the OMG guys play at this location twice a month, and play not just FoW, but Napoleonics, etc. Price couldn't be beat: 10 bucks, which covered the room, 2 slices of Pizzas, a drink, plus there was prize support. Man, THATS bang for your buck. Many thanks go out to Jeff, Todd and the OMG guys for putting on such a great event, we will be back for sure! 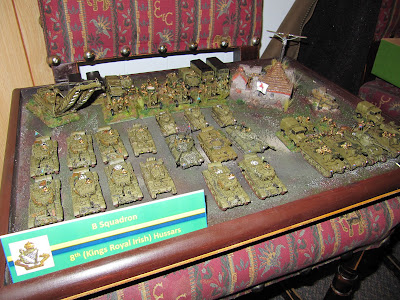 I took some shots of armies and so on, but the lighting was pretty bad, and my Flash is super harsh. However I HAD to get a shot of this army from a Petawawa guy, I think Bob's (who is running the Petawawa tourney in November) Check out that sweet sherman bridge layer objective, and the field hospital!

***EDIT I'll add more text here from workEDIT ***
Here is my video from the event. I wanted to do Interview-style like the WWPD boys did, but should have done it outside like they did, so it isn't as loud! I elected to take a bit of film from the game between Chris and I, but it was so one sided.. we skipped to the end.
By Matt Varnish at October 31, 2011