So last night saw another FNF hosted at yours truly and everyone managed to get in a pair of games. The pairing started with "Twinlinked" and his American infantry facing off in Encounter vs "Clockwerks" PanzerLehr
Here are a few pics of the action, I don't know the whole story as I was upstairs facing a horde of Soviet armor, but more on that to follow: 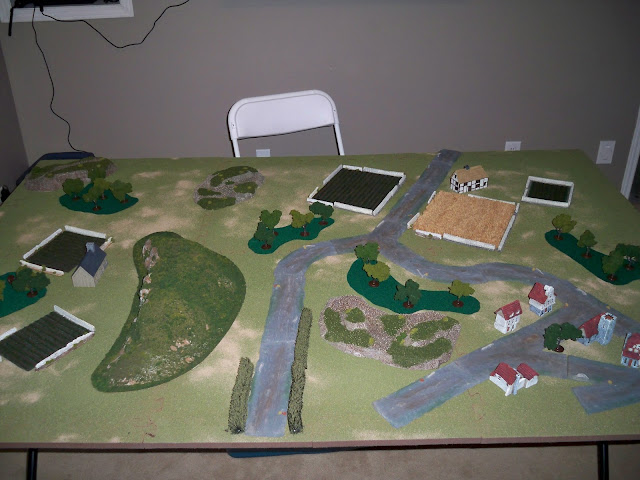 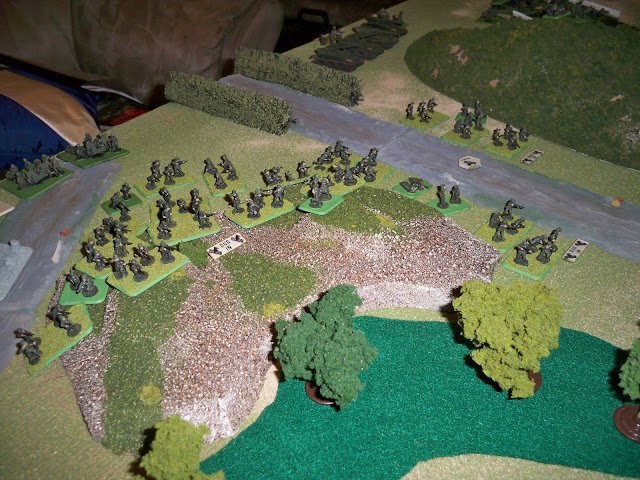 Americans dig in on the high ground across from the Lehr PanzerGrens... 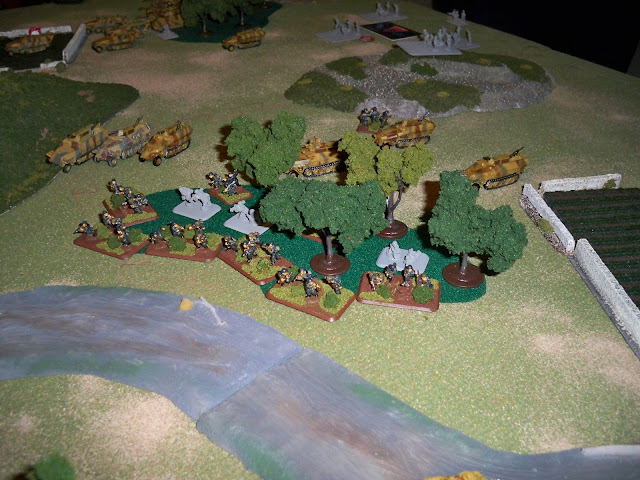 Lehr holding their ground in the central woods 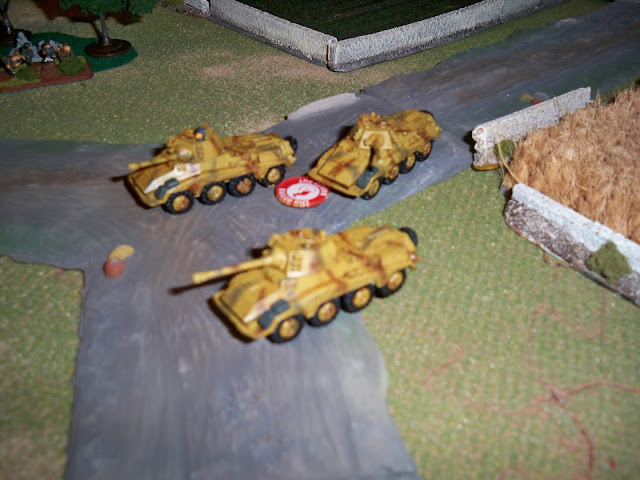 Skip on after the break to see my AARs against "Tickron"!

And now for my first battle against Tickron and his Soviet Tankovy in No Retreat. Being an infantry list, I was defender: 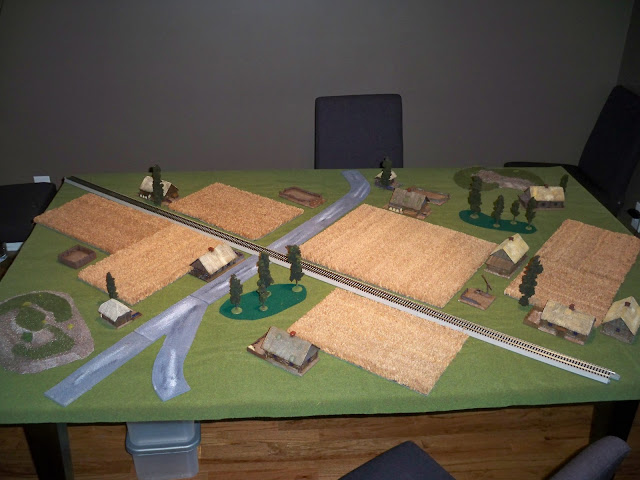 Tickron and I played here 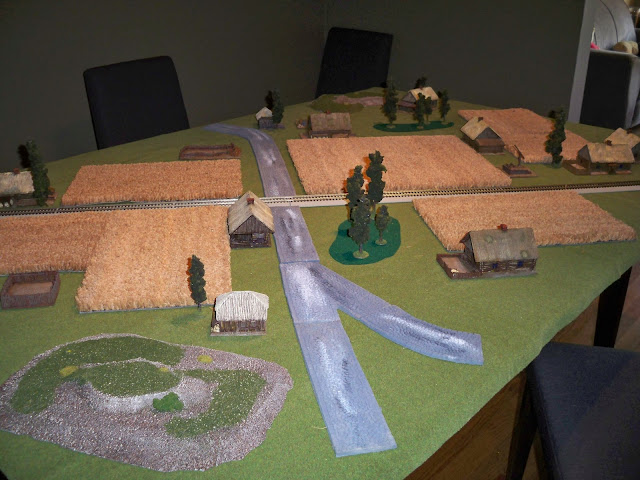 Another shot of the Battlefield 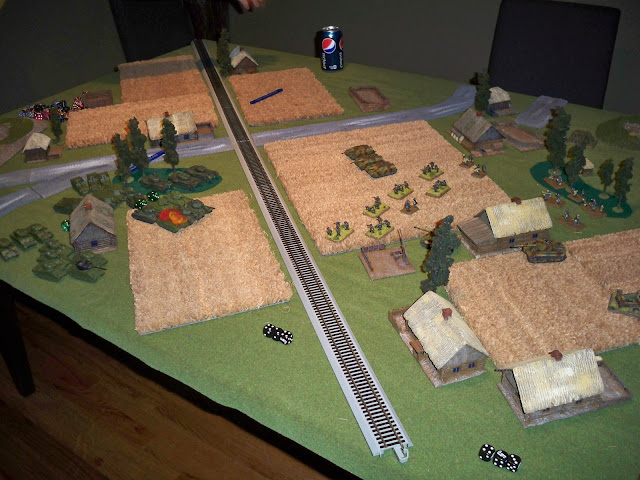 I am deployed on the right side, the Jagdpanzers have just sprung their ambush. Tickron focused all his armor in a push up the South side of the table. 2. PzrGren, and Nebs are in reserve. Note the makeshift minefield on the Northern edge, just on the German side of the road. I believe this led to his focus on a Southern advance. 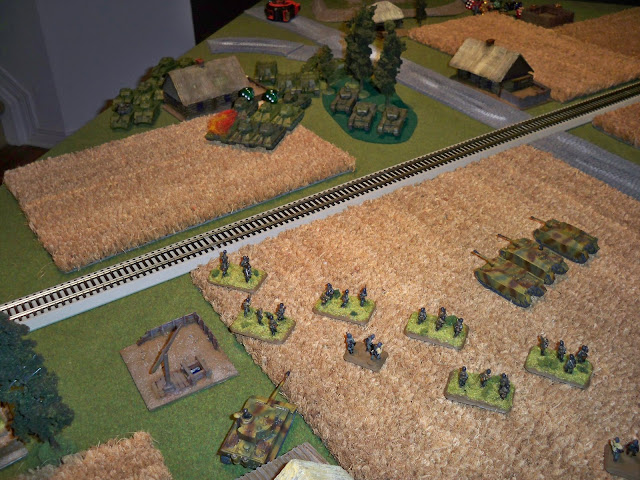 Well, the ambush LOOKED scary, but only managed to destroy one T-34/85 and bail 2 more 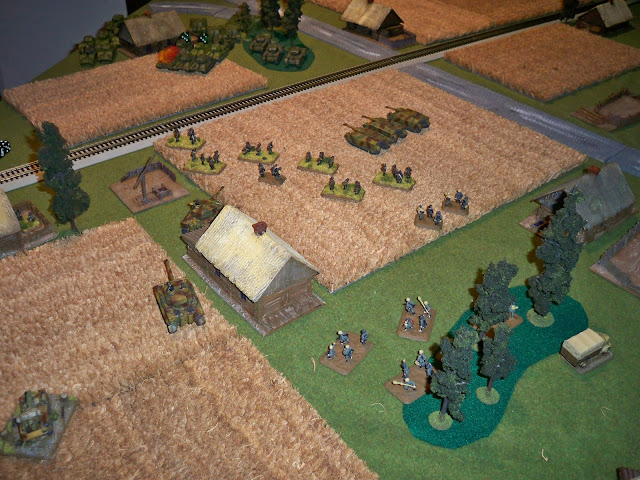 I then reposition the Pioneers to help cover the southern approaches 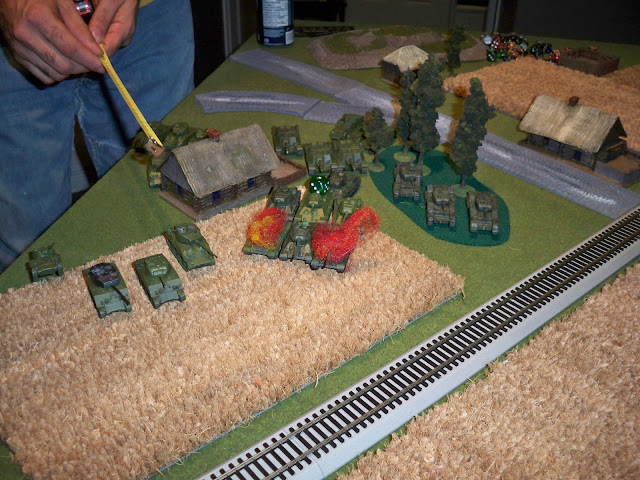 The Soviets continue the advance, and have still sustained minimal casualties. They were having a hard time hitting concealed Germans at long range.. 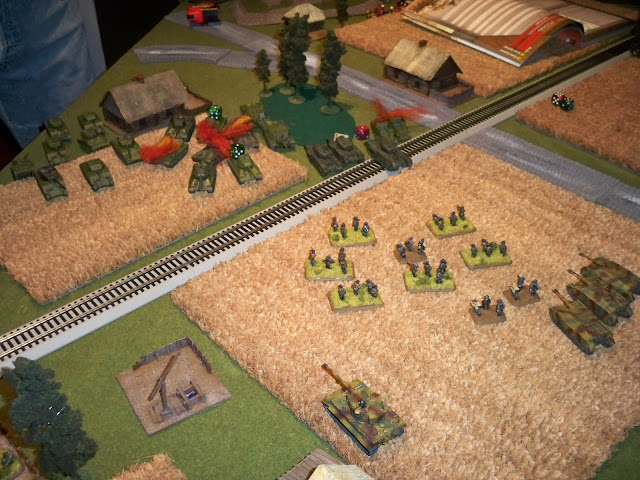 The Churchills break out of the woods but one bogs! The Tigers start repostioning to get better angles on the approaching T-34s. A couple more a re brewed up, and I press my infantry to close in case an assault becomes viable. The M3 GMCs are destroyed by Jagdpanzer fire, and a couple infantry stands fall to Churchill MG fire. 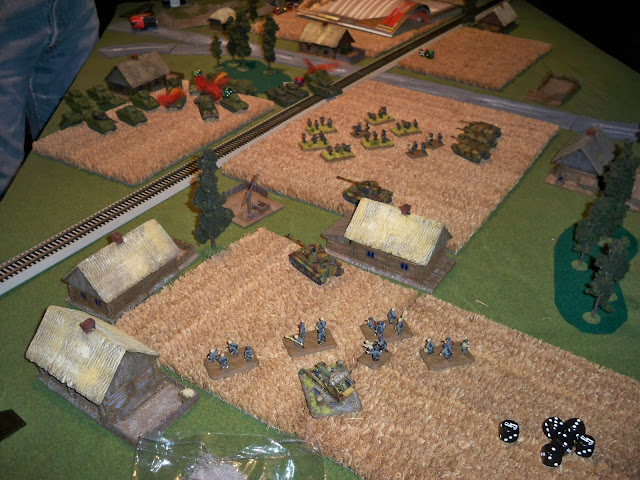 A shot of the whole battle, my reserves have yet to arrive. Note a couple more T-34s are brewed up and the remaining lone M3 GMC has quit the field. 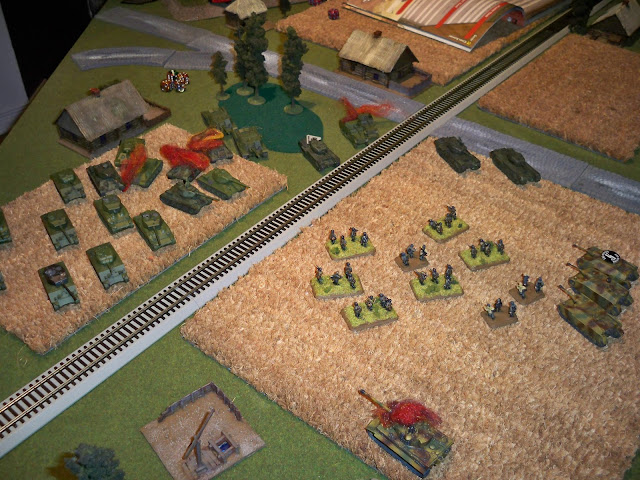 The SU-122 bring their weight to bear and do it with style, downing one of my Tigers! The Churchills start flanking and bail a Jagdpanzer. 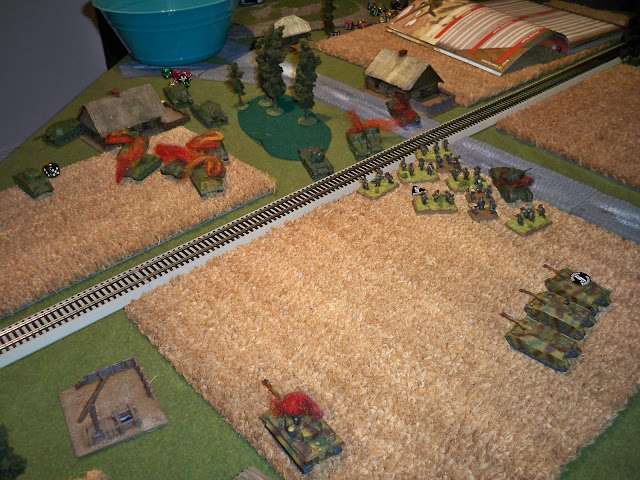 It's now or never - I throw my infantry at the Churchills in assault. I didn't move or shoot with them, allow them to jump right onto the Chruchills  without them getting defensive fire (I was in concealing terrain, and hadn't moved or shot - but the Churchills being in the same terrain feature, I'm not sure this was right??) 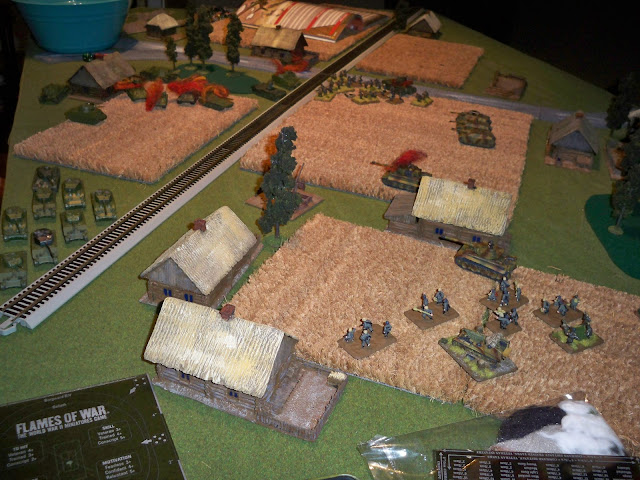 The assault proved pivotal as the Churchills are overwhelmed with panzerfauts in assault and are destroyed. The M4 Shermans are advancing along the left  (south) edge, and I have one Tiger and a small infantry platoon to stop them with. And my luck continues as I pivot the Jagdpanzer and get 6 flanking shots into the Shermans, cooking 3 and bailing 1! One of them being the Commander, and I managed the 4+ roll to kill him. 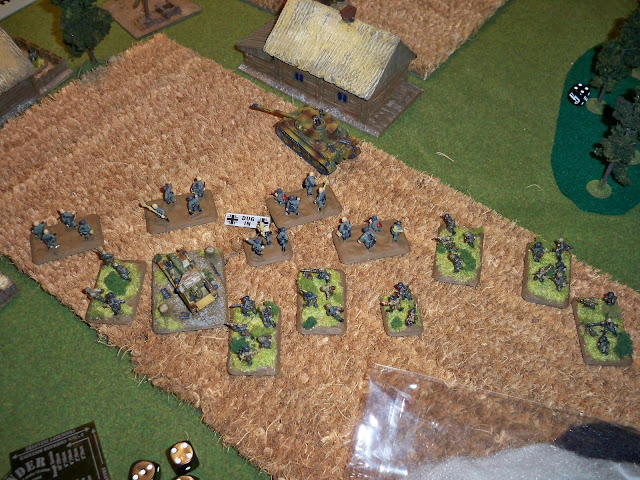 My 2. PzrGren Platoon arrives from reserve to shore up the defenses. The Pioneers finally dig in on the objective (took 3 turns!) 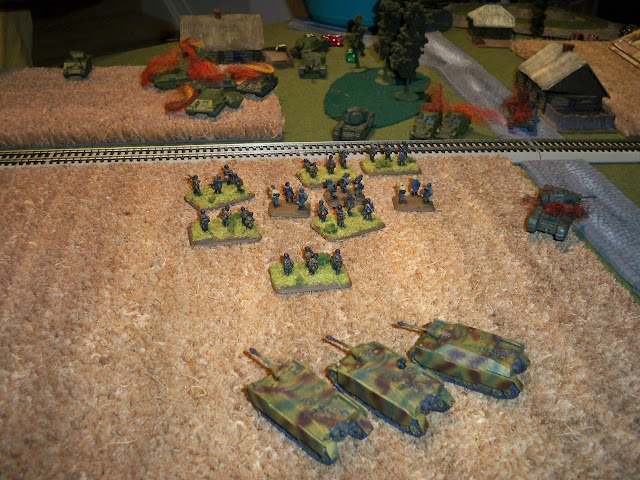 Another angle of the parking lot of burning Soviet armor. Notice the Jagdpanzers are pivoted to face the Shermans just left out of picture 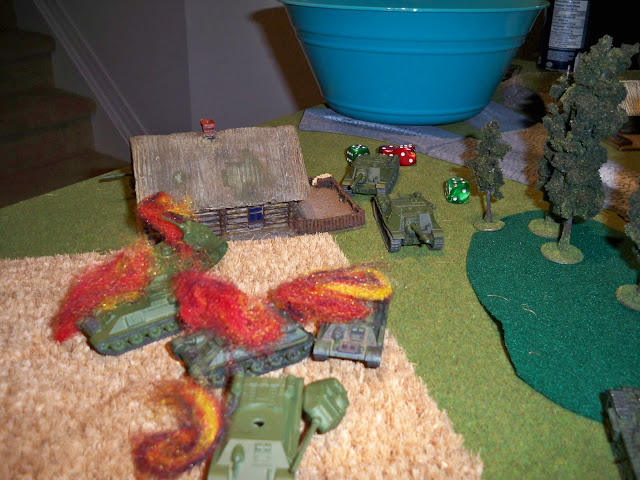 The SU-122 still hiding in the back field. There they would stay as the company morale test was failed on the following turn, result in a Soviet withdraw. The final tally?

It was a fun game overall, and the wall of armor was intimidating. The concealing wheat fields really helped my infantry stay alive, and the good old Veteran status of the German forces kept the hits on my small armor units to a minimum. Thanks again for the game Tickron!