So I finally had a 180 moment, where I wanted to start early war...I think it was a combination of playing World of Tanks, and seeing some Early War germans painted up on the Flames of War website.

So here is my first attempt at an early war colour scheme. The tank isn't done but the colours are where I want them. 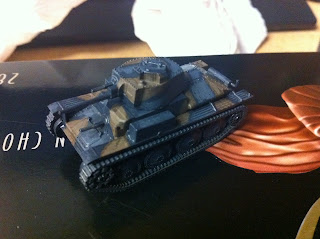