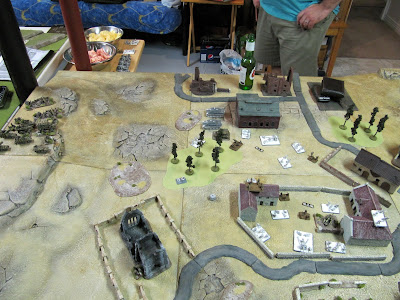 (above) Desert Table, we rolled up Cauldron, with Lothlann defending with his 2. SS 'Das Reich' vs my 21. Panzerdivision.


Jeez, has it really been FORTY Flames of War Videos? If I add the old 40k ones I think we are up to 120 video battle reports.

Anyways, another Friday Night Fights, at Brett's (Pripyat's) Basement of Doom, and I square off vs Lothlann's SS. In a first for me, I am sticking with the same list over and over, in the hopes that it improves my game. I also hope that 1 of my 2 unpainted units "shine" to help me decide what to paint next.. Tiger II or 2nd unit of GPGrenadiers..

A first.. I will try and put up lists 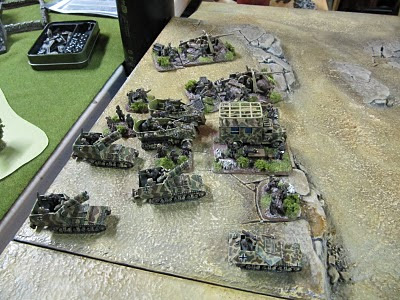 (above) In Cauldron, the defender sneaks through enemy lines at night, so I decided to have as my 3 on-board platoons the SOMUA-Werfers, L37 Howitzers, and the '88s. As you can see here and top pic, 2 units come up on a wide open quadrant, so I have to put my commands here for extra support, given they are 12 inches from Loth's table edge. The SOMUA-Werfers are in the opposite quadrant, again, exposed, but on a hill also. Loth deploys infantry on objectives, and his 2 Imm. Ambushing JagdPanthers deploy to kill my '88's, but would need 6's because they were in Prepared Positions... Next pics are of the other deployments.. 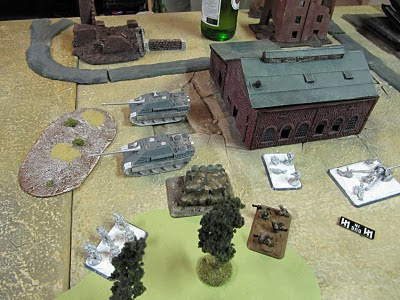 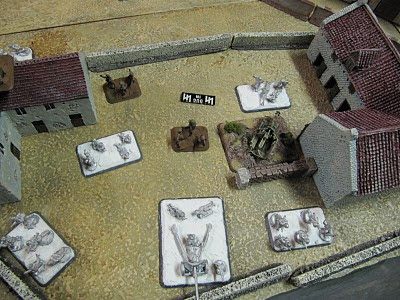 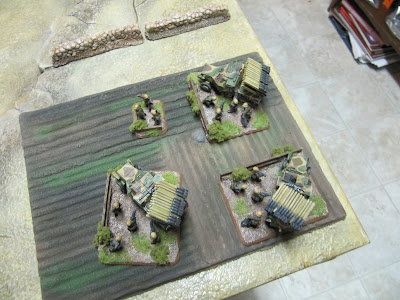 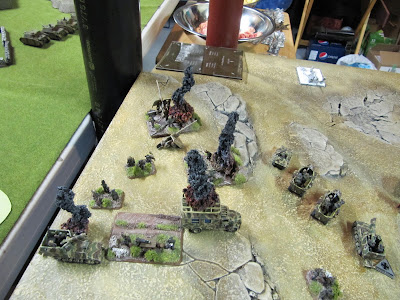 In typical "me" fashion, I get so wrapped up in this game that this shot of my hill-top after the Jagd's get good shooting in, is the last pic I take of this game. This is why I try and take Video between each turn! Also pictured: My new Smoke/Wreck markers, made the 'TerrainGuy' way.. thanks for the Video (Its on RHQ and Youtube)


This game came down to the last few models, and the very last possible dice throws of the game. (Note, in the video, I fail to mention the 'Hero' lone KGrupped PaK40, who would double bail the TigerII and I would fail my motivation! 2 abandonned results in 2 straight games... C'MON GUYS!!! you are in the highest tech tank of the war!)