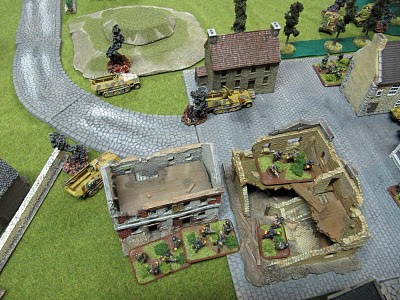 (above) Adam's G Panzer Grenadiers on the advance, Fighting Withdrawal


A few of us had Monday off, so we decided, what the hell, lets get in a game at Brett's Basement of Doom. We figured we'd have enough time to get in a set of games, but it turns out it was "The Longest Day" with some rules queries, and so on, plus we got to see the end of a Fighting Withdrawal game. We went 8 full turns, even though it ends turn 8.. learning experience! Also, I was painting my Tiger II while they played, and it turns out i was 2/3rds finished when I realized I was doing it all wrong. Luckily I keep all my models in my army case, so I simply started on a different hull. 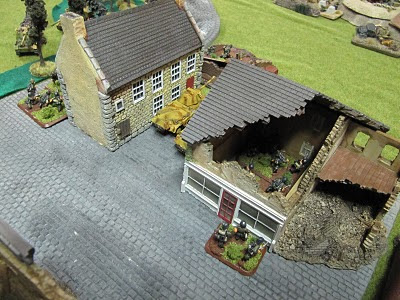 Adam's Puma's and infantry would stare down a FSJ unit in a trench line all game. I think Adam now knows that shooting vet inf. in Bulletproof cover is futile. 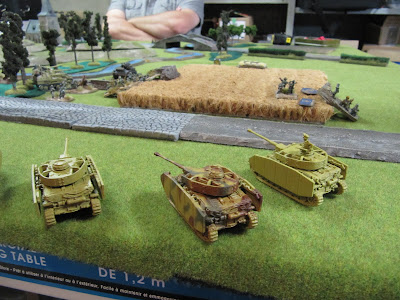 (above) while this would appear to be some PzIV's showing up from reserves, they are actually BEHIND Brett's units. Adam had a very mobile CO and PzIV, and not-so-mobile Brummbars who couldnt pass a Storm move to save their lives, and his second unit of infantry got pinned turn 1 by Neb's, and didn't unpin until turn 8! 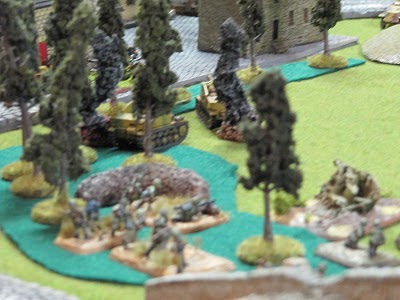 (above) some Marders burn in a forest while dug in FSJ look on. They would end up getting completely surrounded, but luckily, the last objective was roughly 2 feet away, so they did their job which was delay units.

We ended up with a rules question for everyone: A tank platoon does an assault, forcing the unit to break off. The rules for "Breakthrough" say they can assault "another platoon" but can they assault the same platoon? We were getting a little fuzzy at the end, we just figured they probably couldn't.

Anyhow, Enjoy the video, it is roughly twice as long as normal given that we didn't have to worry about time or how late it was at night etc.