Our 4th game of Version 4 using the new lists.  80pts of Panzer Ko. vs my Desert Rats Motor Co.  Hasty Attack, on a desert board featuring 'Truck Park' Forest templates, because we were light on desert terrain, but had heaps of trucks, just laying around!
As ever, Video of the report and our thoughts is at the bottom past the pics.  Enjoy 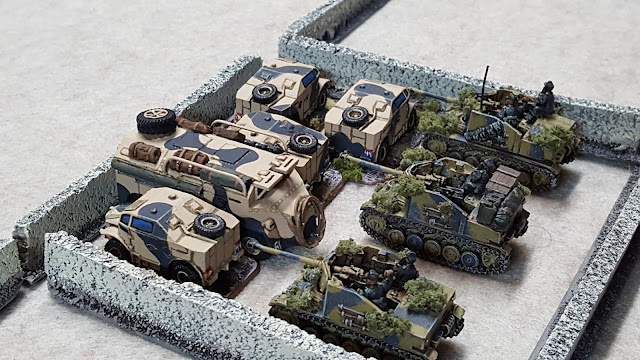 Matt puts his Marders in the 'Truck Park Forest' in his DZ.  We moved the trucks around when he blitzed forward.   They need more Iraqi Sand to blend in with Monty's Party Bus !! 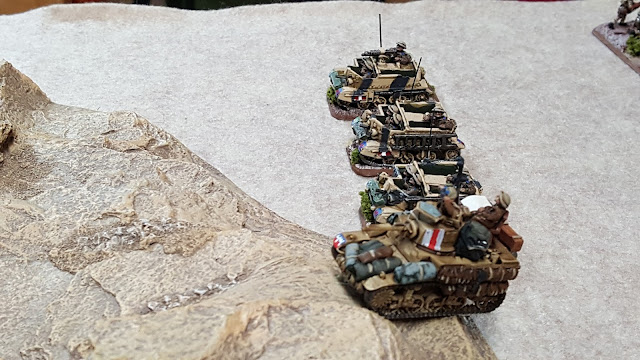 Hastily-assembled Honey OP.   I used staff team models and rangefinder to put up an OP on the engine deck, and then had to add stowage as a counter-weight, as this is a plastic Zvezda Honey. 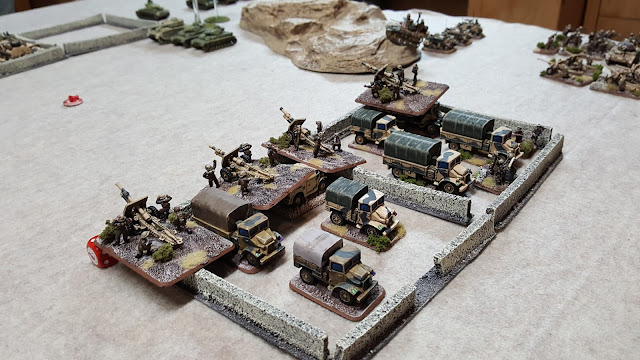 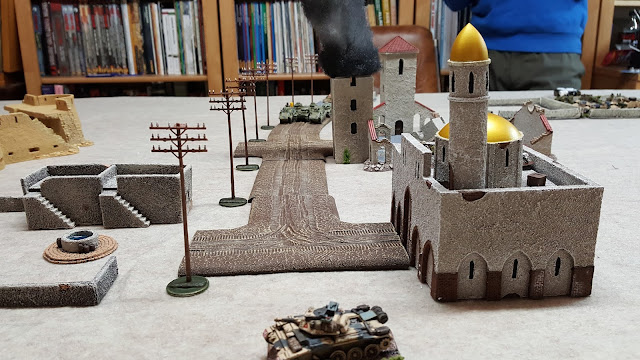 Centrally, Matt put his 8-Rads and PzrIIs ready to Road-Dash to the wrecked Crusader objective, and the only teams I have nearby are Mortars on the roof of that Mosque.   40% of points into reserves really hurt this list.. but I have 6lbrs in Ambush. 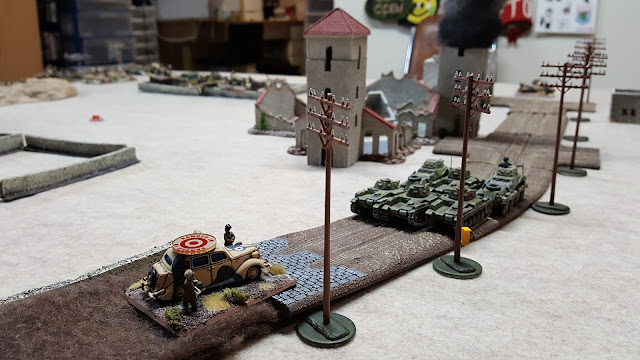 German-side view towards the British lines.   Because of the defenders extra few inches in deployment zone, the Spearheading teams could only move 4 inches closer to my lines.   My mortars are pre-ranged-in on Monty's Humber objective. 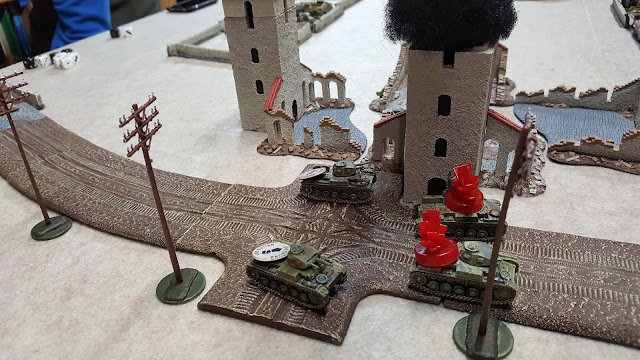 My second 25lbr battery were JUST in direct fire range of these PzrIIs. 6lbers also put in work, but both PzrIIs would remount, avoiding a Last Stand test. 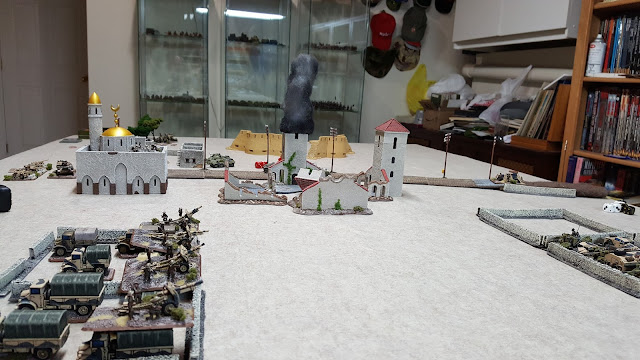 Marders and 25lbrs face off from opposing Truck Parks.   4+ gun save vs anything is better than vehicle saves, though I spent most of my time direct-firing at PzrIIIs and IVs. 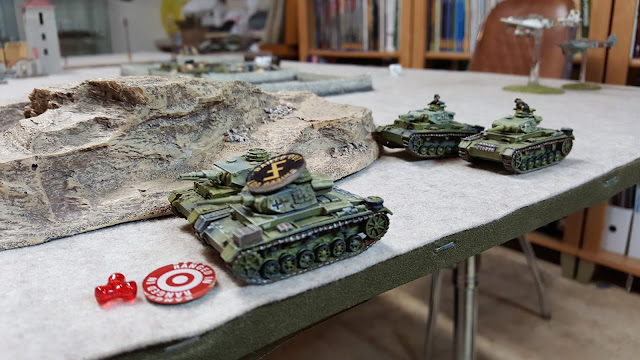 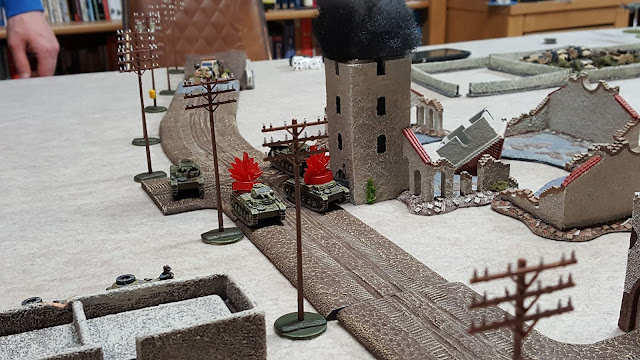 8-Rads hide from my 6lbrs behind the building in extreme lower left of pic. This table was very gun-friendly, but we had used all the desert scenery we had at hand.   Rob would call this 'tank country' but I think everyone else would disagree! 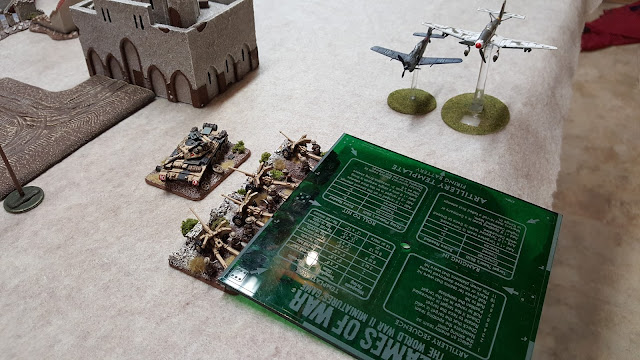 Luftwaffe come in, and use bombs to pin my 6lbrs defending the Crusader objective.   Matt wanted the template as far back as possible to enable his 8-Rads to move into the courtyard to be behind a low wall vs my 6lbrs and have a building to protect them from my 2nd 25lbr battery.   Wave-off is now 8 inches from the template, not 16 from the planes. 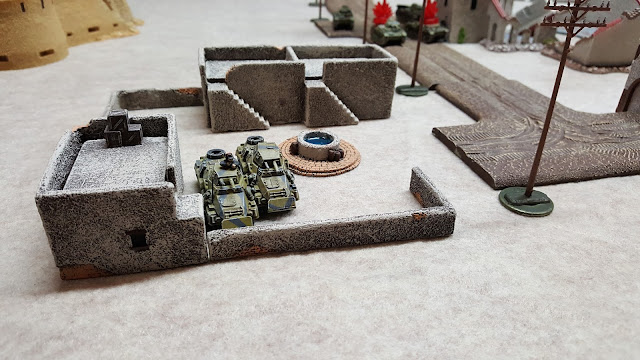 As described above, 8-Rads in position, but with 3+ gun save, I would lose only one 6lbr to the Stukas in the attack mentioned above. 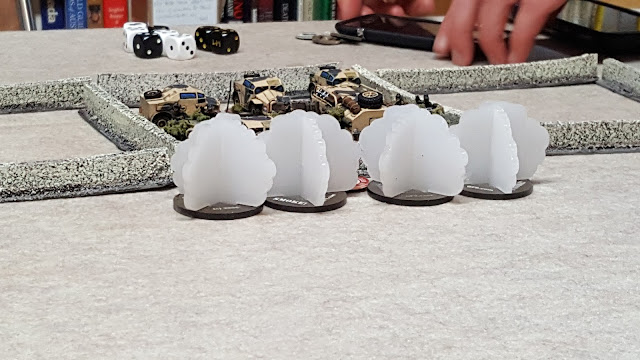 Meanwhile, 3inch Mortars drop their one-and-done smoke in front of Marders.  I guess smoke rounds were in short supply?! 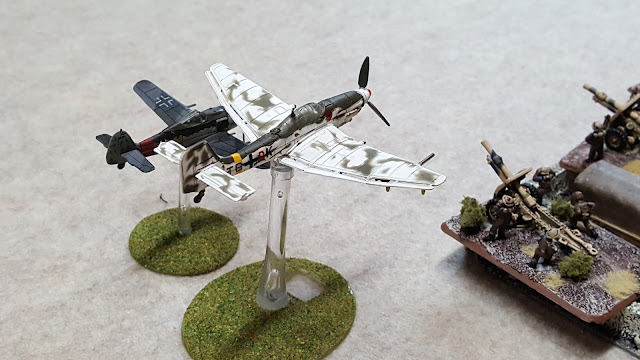 Grass is always greener, under the Luftwaffe!   With his PzrIVs coming on, Matt places a template right in front of the 25lbrs in the Truck Park hoping to kill and pin my guns, but because the template is into concealed models, he is +1 to hit.  With only 2 planes, it makes it difficult to Hit anything.  Early consensus is, Stukas not worth 9pts. 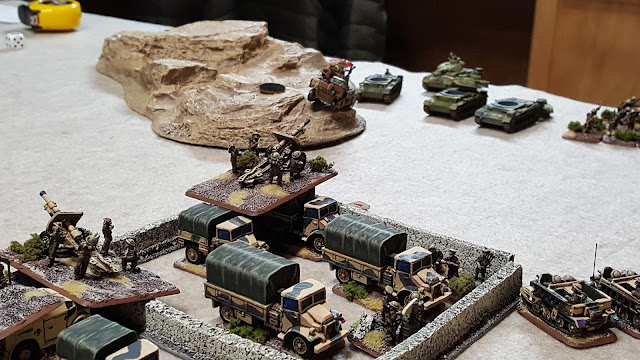 25lbrs do not have the Forward Firing rule, which means they can shoot 360 degrees (the old Turntable rule) so I got extremely lucky and wiped out the PzrIIIs, leaving his HQ tank to flub firepower and only Bail my Honey OP! 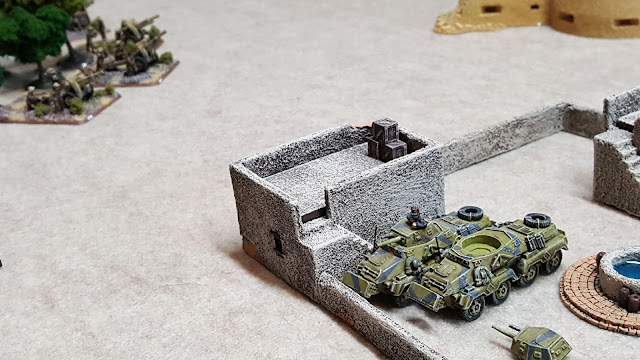 8-Rads shielded from my 2nd Battery.  All of the action was central and right hand flank, so this is the only pic I have of that side.   One 8-Rad has been killed by 6lbrs at this point 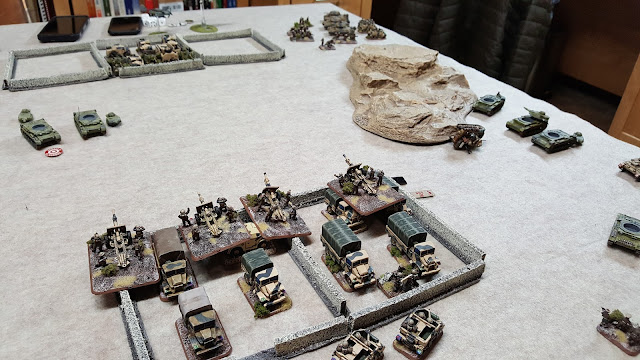 But the 8-Rads, Marders and Stukas are all Divisional Support.  With the PzrIV platoon dead (left side of pic), PzrIIIs down, my Crusader reserve gun down the HQ Panzer from the side with 2lbrs and break his formation.
Wait a sec, didn't the internet forums say Formation Kills were going to be impossible ?!?!!?   :) 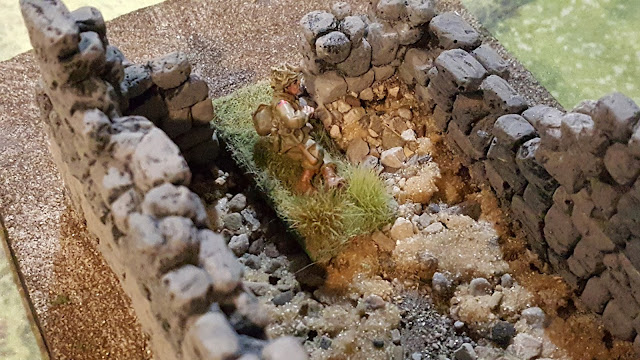 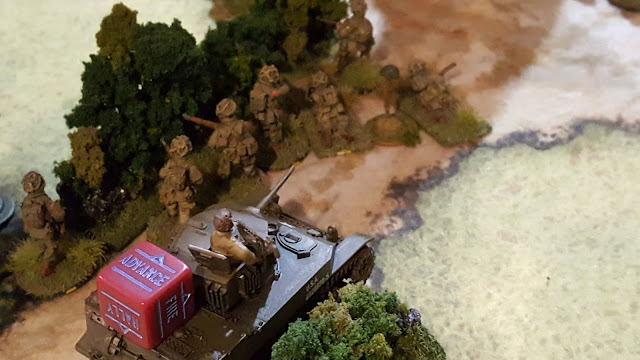 US Rifles taking cover while the M3 moves up in support. 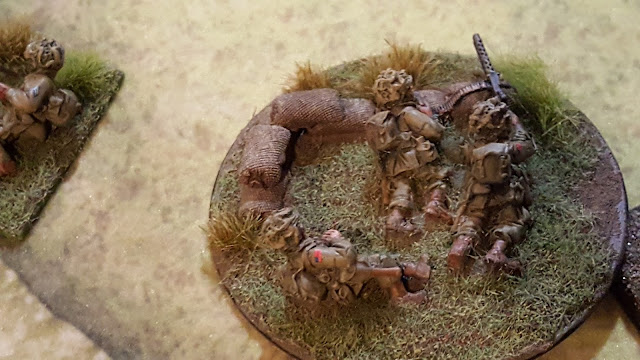 LMG.    I was pretty sure the shoulder flags were supposed to be the other way, but we're Canadian, what do we know? 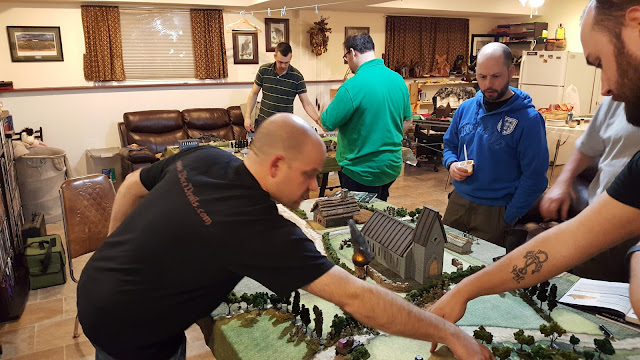 Big thanks to Scott, who opened up "The Basement Down-Under " for a huge Bolt Action game (Tristan and David, with Matt looking on) and Andrew and Moser playing Afgantsy vs West Germans in the background.  All while Matt and I played in the painting room our game of Flames. 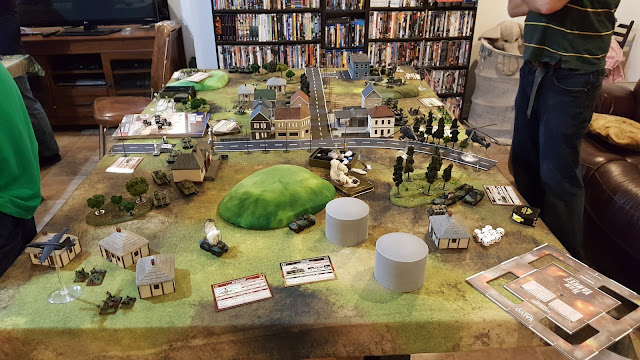 You could still smell the primer on Moser's models, he built 8 Hinds so far, which is 7 more than I ever want to assemble ever again!   He was making aircraft saves like a champ, so I've been told !!
By Matt Varnish at February 26, 2017

Email ThisBlogThis!Share to TwitterShare to FacebookShare to Pinterest
Labels: 15me, british, Flames of War, Version4