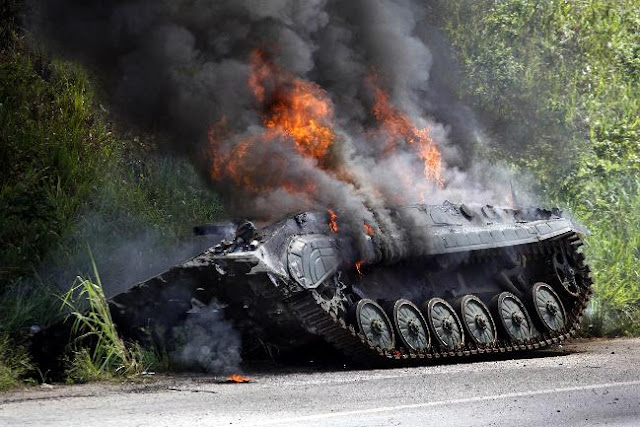 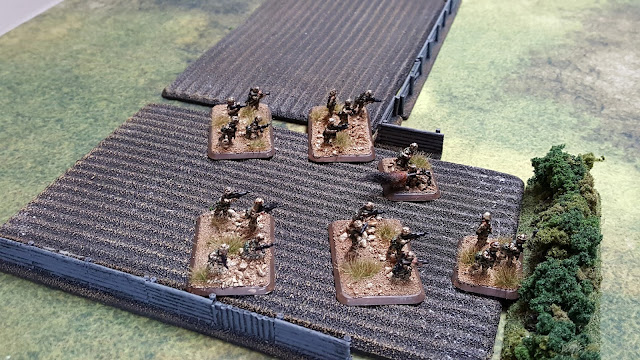 I got a tripod on my camera, so here are some good shots of the 2nd US Mech platoon 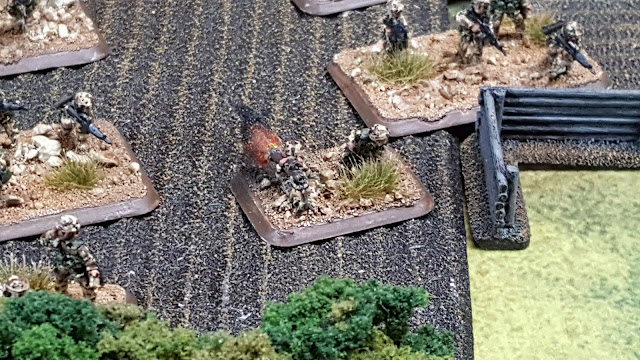 Metal flame removed, cotton one put in for the Dragon team. 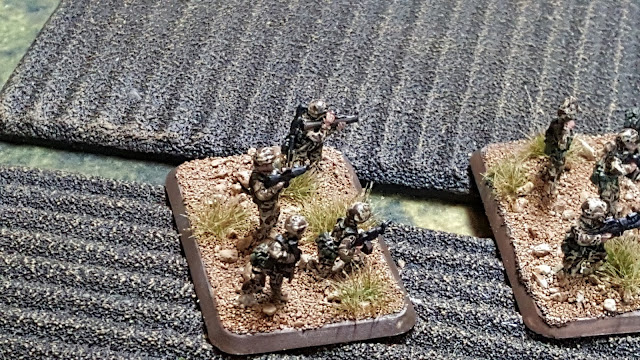 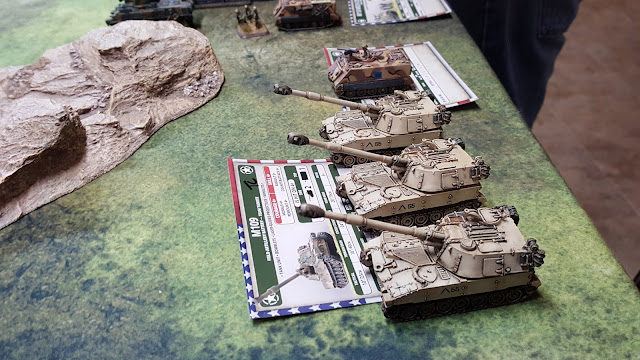 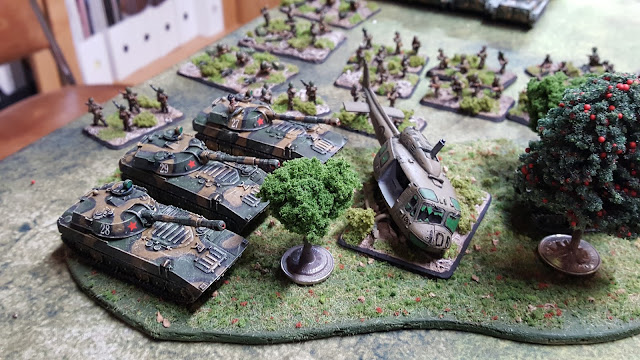 I deploy my Gvozdika's for the first time too, in a wood near the crashed Cdn UH1 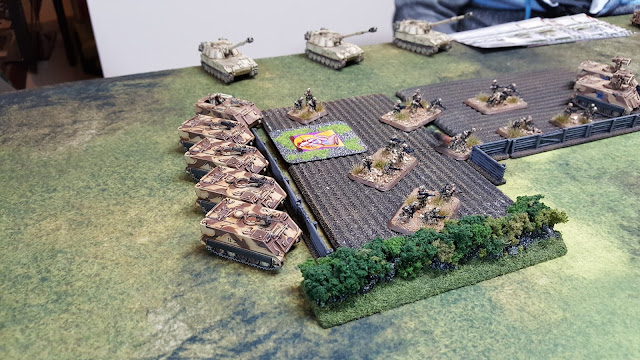 First US Mech platoon in the crops. 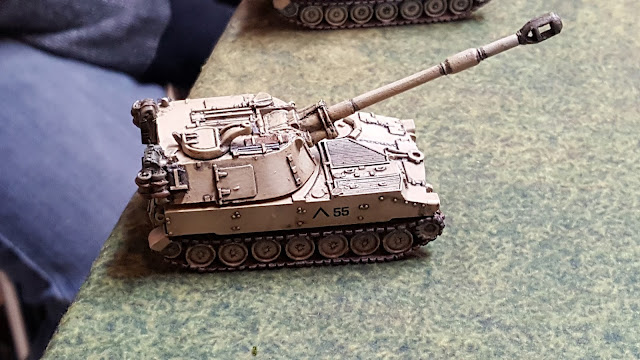 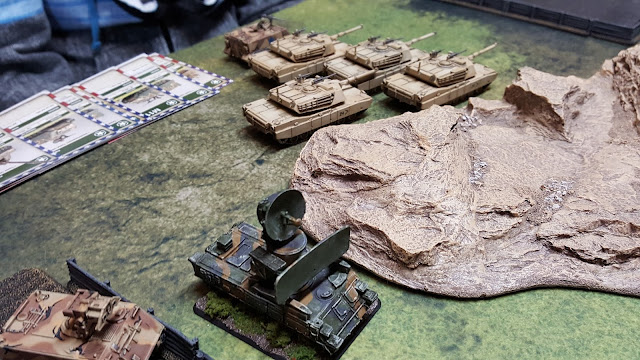 Tris would deploy his 4 M1's by the Radar objective.  I deployed my BMPs in a swarm.  He went first.. 8 shots.. 5 dead BMPs.  made almost all my inf saves though.. 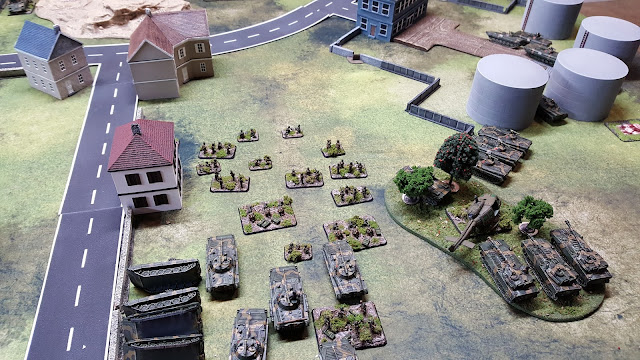 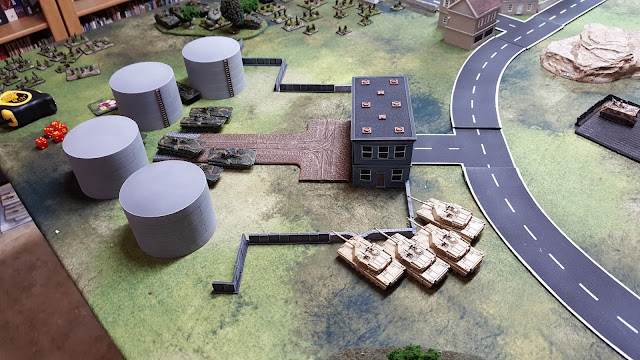 Turn 2, he kills 7 more BMPs on 8 shots on the second Motor Rifle unit.. 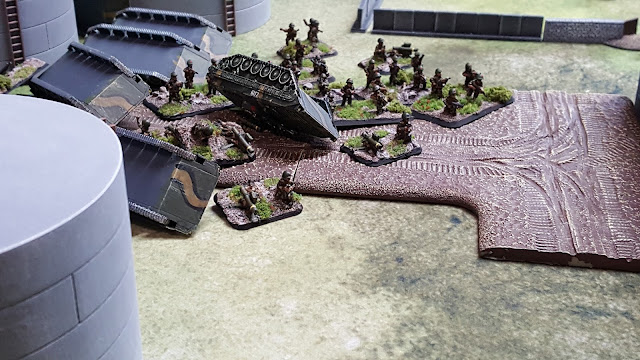 Again, I make most of my inf saves.. 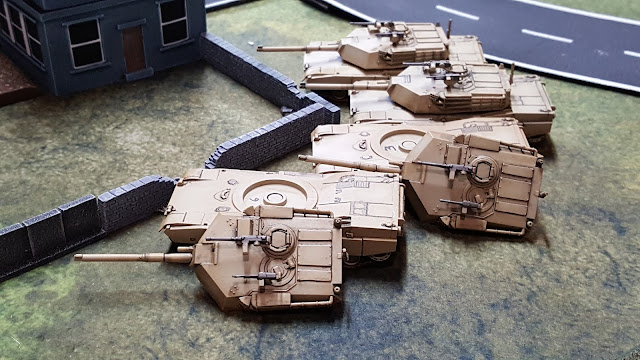 .. and remaining BMPs take out half his firepower.. These guys await my reserves... 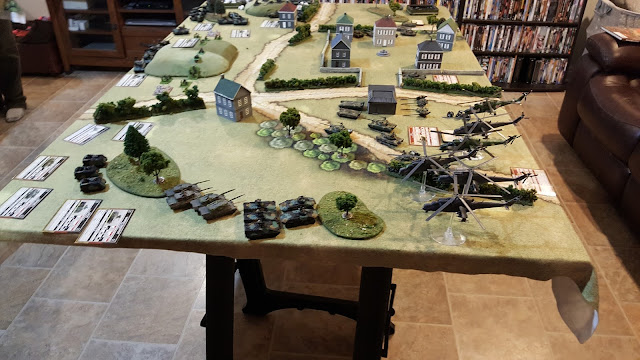 Busy night, in the other room, we had Moser running Afgantsy vs Andrew's West Germans 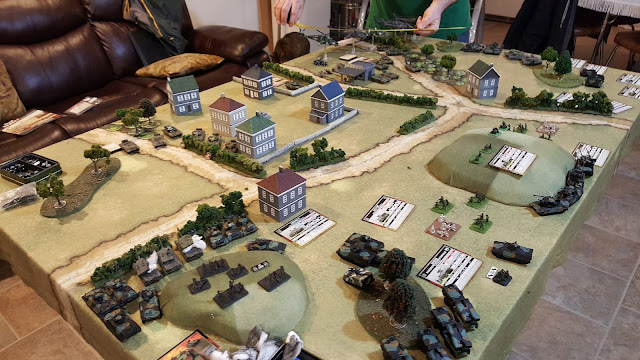 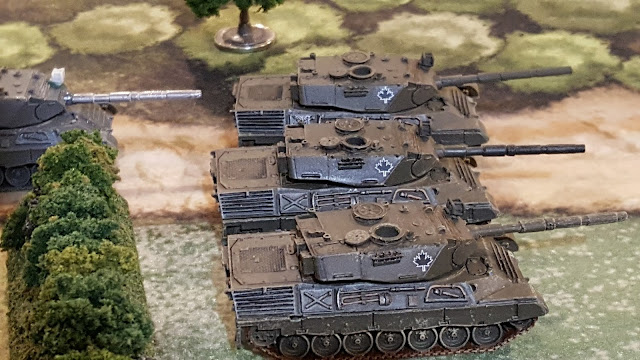 While on the 3rd table, Rob makes an appearance with his Cdns vs Kevin's Iraqi Republican Guard (no pics, until they are at least all assembled and base coated)
We hear that 31 T-55s went onto an objective, and the 3 survivors won the game!! 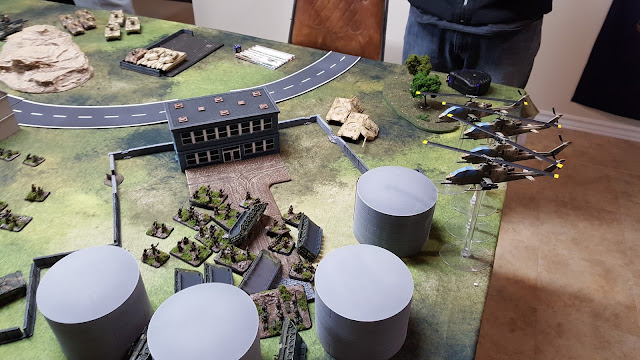 Back to our game, Tris decides that he will Blitz on and fire at BMPs if he passes, and if fails, those dismounted infantry in the open are the perfect target for the Pie Plate. 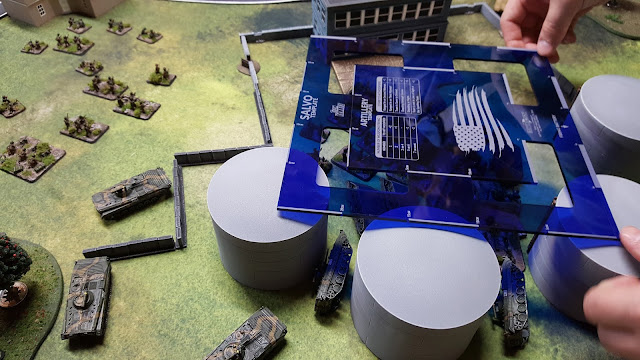 He failed the Blitz roll, so went for the arty. 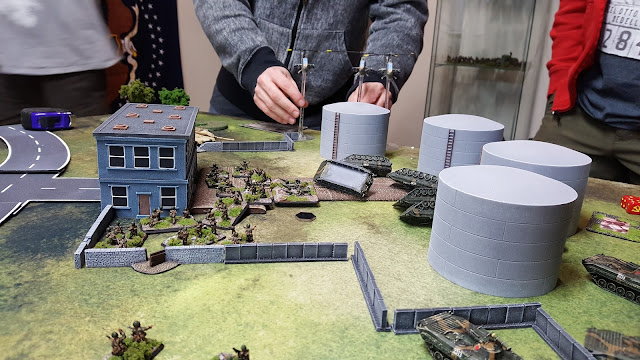 Again, I made most of my saves, unpinned, and advanced!! 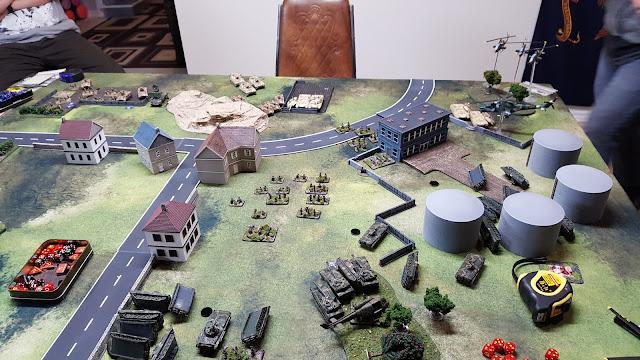 Infantry advance and use RPG18s and RPG7s to crack open some M113 hulls.. 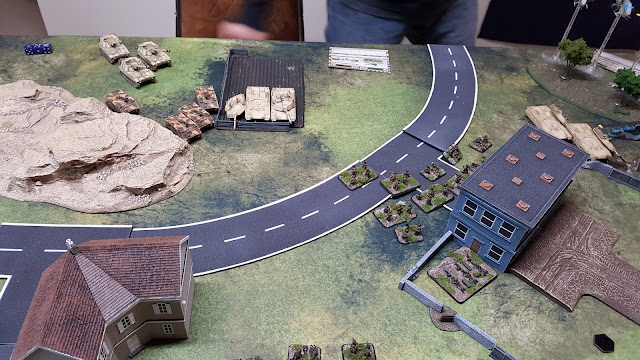 Chobham armour means I can't do anything to the M1s though. 'Chobham' sounds something the British would use though.. or wasn't he a butler on Downton Abbey?   :) 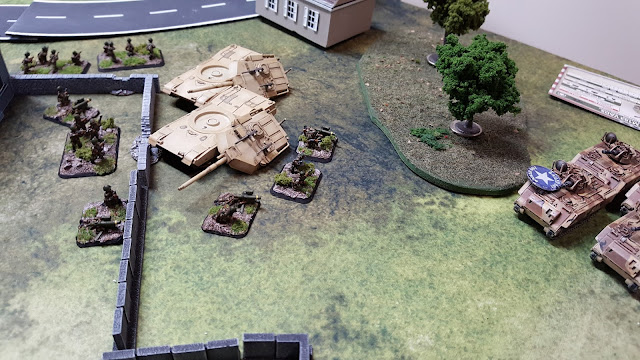 RPGs on the VADS as they come in. 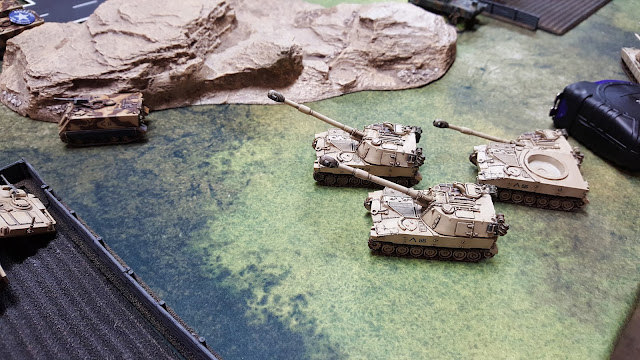 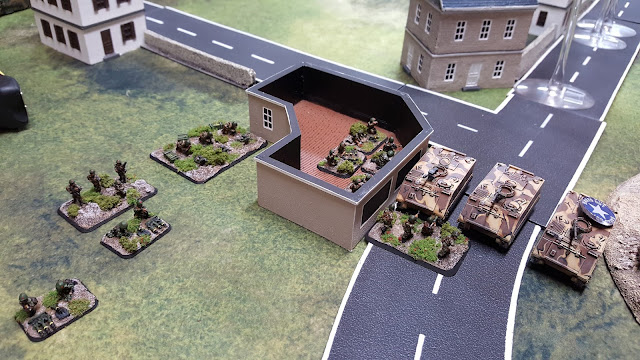 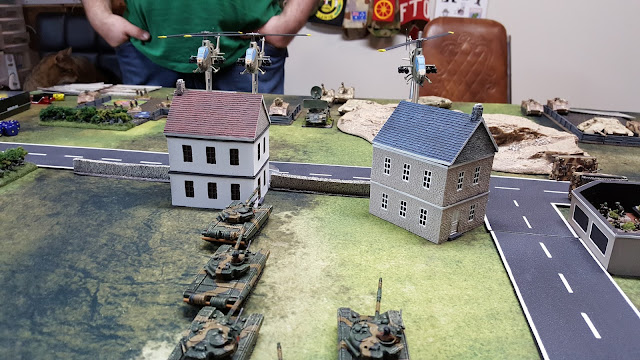 Meanwhile, his army kills off my arriving reserves on the other flank.  The remaining Cobras come in to finish off my T-72s.   Game ends, 5-2 Victory for the US.

As always, below is the Video.   While I have a small tripod for the video, I was still holding it.. so it might be marginally be better.   Will try to be better with it next game.. V4 :)