Catch a Tiger by the Toe (Final Version 4 Test Game) 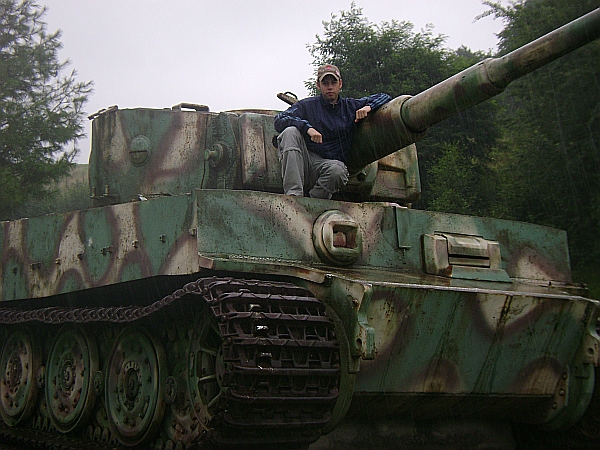 
So, depending on the list and the cost of a unit, a game using the new Version 4 rules can go one of two ways. The first is that you flawlessly execute your plan and your opponent suffers as a result. That chance your plan doesn't quite go as you saw it from the beginning however, sometimes rears its ugly head and you get trounced. That's the second possibility.... It's a Thursday night, Tristan and I go for a game of Germans vs Germans in what was a a great back and forth game from the start and later just turned out to be downright brutal for me in the end.


Scroll to the bottom for video of the game!!
Hope you enjoy it and the discussion on the game we had afterwards!
List descriptions are in the video!

Catch a Tiger by the Camel Toe, more like! 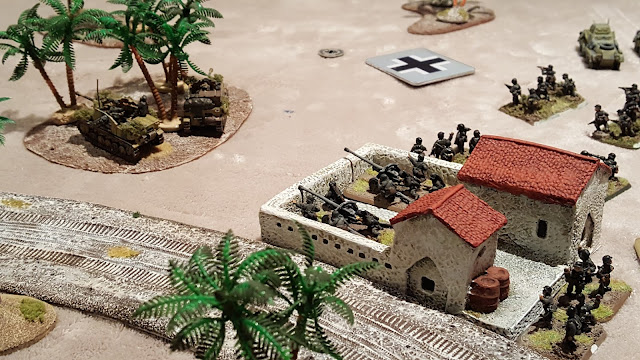 Here you can see my deployment of Marders, PAK 38...sorry, 5cm AT guns and some infantry within distance of the objective, but just outside Tristan's pre-deployed 'Ranged In' marker in the top center of this photo. 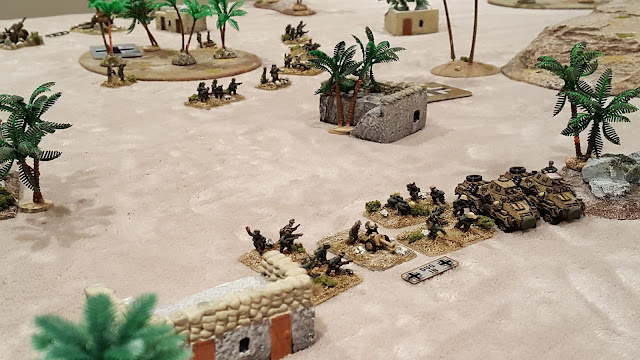 After Tristan gave me the first turn, I waited for him to really make the first move. With the bulk of my points in one unit, my Tiger was still three turns away from making it's debut.As is the case with Delayed Reserves, I knew I was going to wait a minimum of three turns. Couldn't afford to lose anything early! 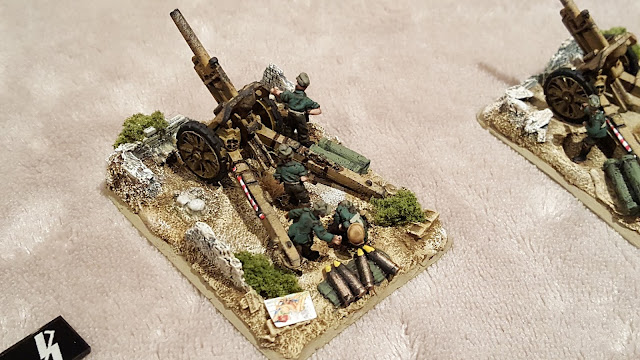 Pin-Ups!!  Always a distraction!
(The attention to detail is a huge part of why Dennis aka MattVarnish has managed to capture several 'Best Painted' awards at both local and National events. Not just in Canada, but in the US as well.) 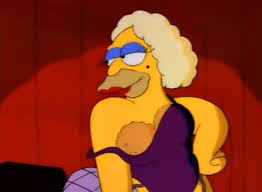 ( If you don't remember this clip from The Simpsons, you're dead inside ) 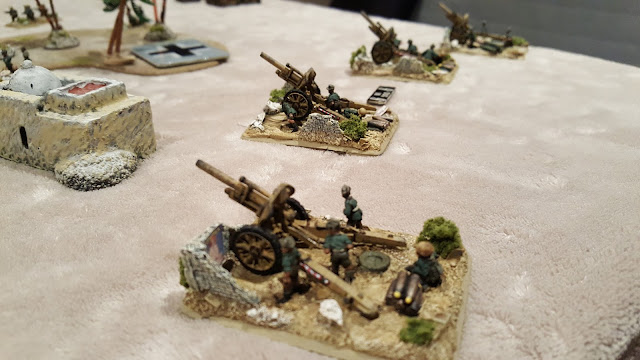 The distraction of their lewd magazines however did not dissuade Tristan's 10.5cm guns from inflicting their fair share of casualties during this fight! According to Dennis, this was only the third time this unit has seen the table. 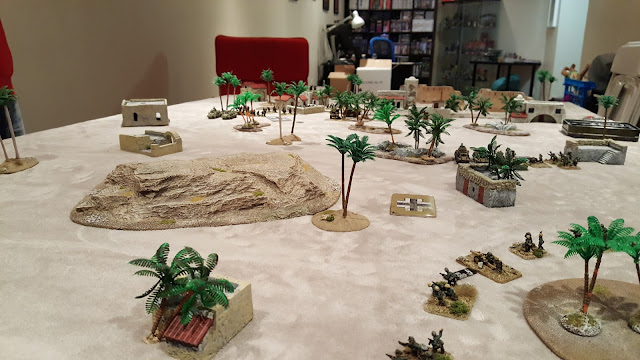 Tristan's table edge looking over to Matty's side of the board 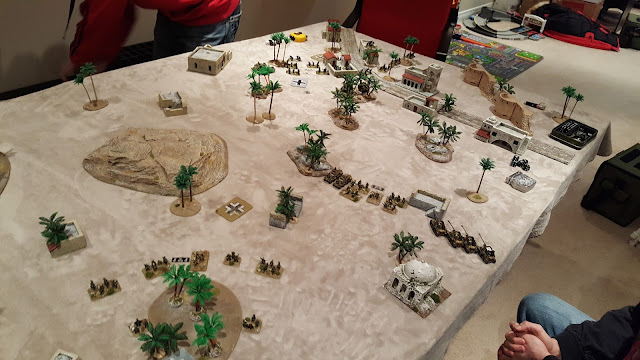 Some long range shots back and forth, inflicting a few casualties on both side. 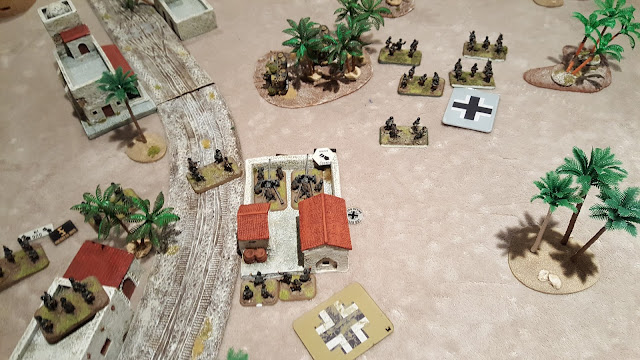 Anti-Tank guns are pinned down, Marders have been destroyed by consecutive rounds of good shooting on Tristan's part. He made use of cover and still managed to get the maximum number of shots each turn. 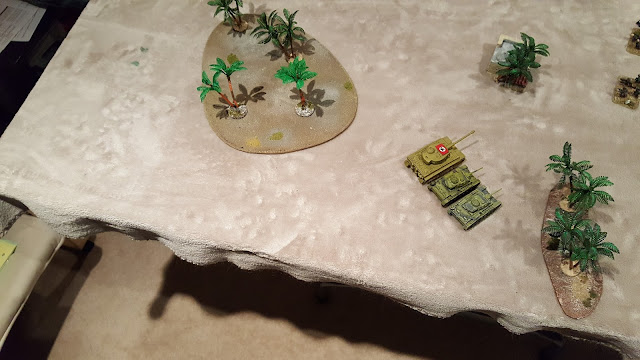 Turn 3, with a roll of a '5', the Tiger unit enters the table. 'Ze Germans' shake in their jackboots. A few turns later, they would tremble no more. The entire unit would be wiped from the battlefield. 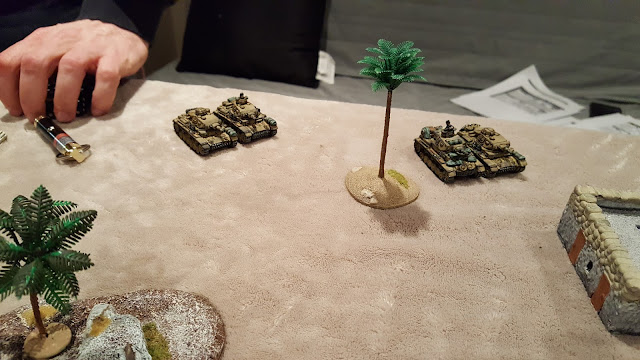 Tristan's Panzer unit arrives shortly thereafter to deal with the enemy armor. It was this point where they could support the Marders or drive off and contend with my infantry and AT guns. 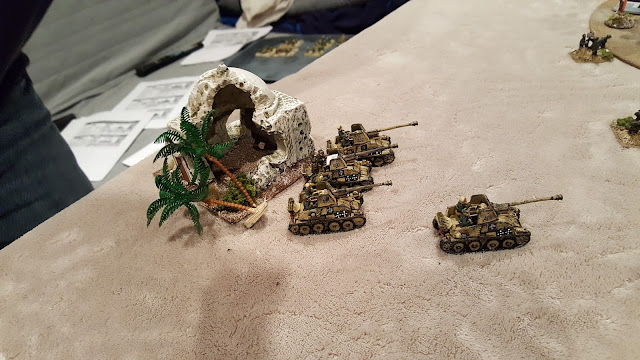 Going for maximum fire on target, Tristan positions his Marders to get the most shots on target. Including some long range shots on the Tiger Heavy Tank. 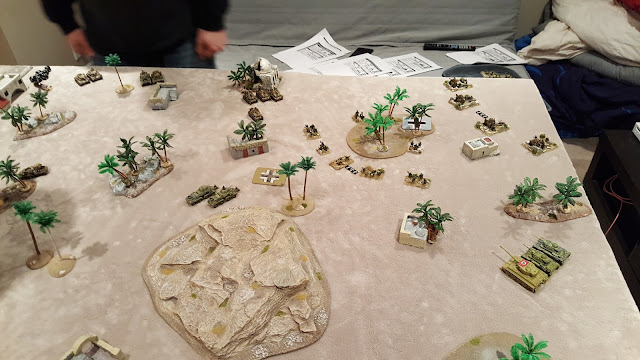 I used the slim treeline on the right center to block the field of view from Tristan's 10.5cm Artillery unit.....a lot of good that was. The plan was for me to roll into the gun line after dealing with some of the infantry. I wasn't sure I could face an assault, and try and deal with a battery of artillery at the same time. All while facing 8 shots from his Marders every turn. 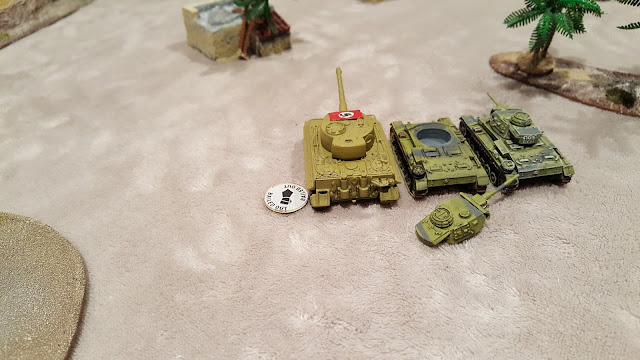 After taking at least two hits, I managed to switch one to an escort Panzer. Rolling a measly 'one' Tristan fails the firepower and manages to bail my Tiger. 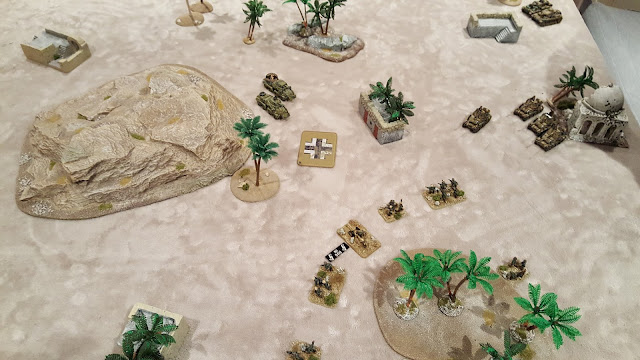 Being super aggressive with Recon units, I moved my 8-Rads towards the objective and was looking to maybe try an assault in the next turn. Or perhaps go for the Marders, which would I choose?? Watch the video!
(I really wanted to try the mechanics of an assault, I know this unit is less than ideal for such a task) 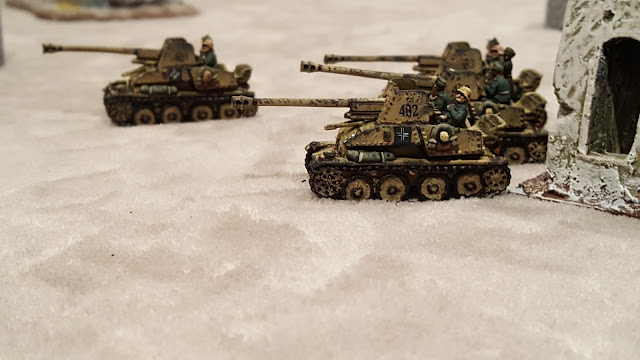 No it isn't a guy barfing over the edge, its the PSC halftrack stowage. 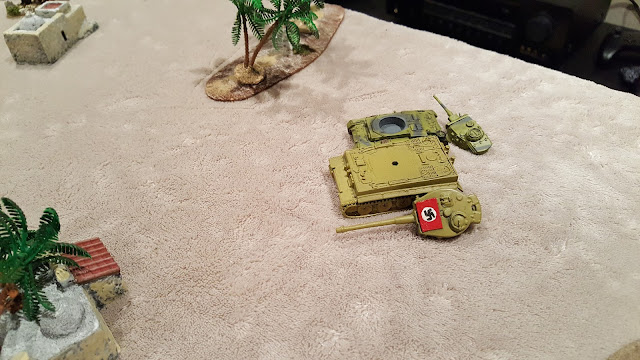 Maybe it was the fact I couldn't find my well painted Tiger. Maybe I put too much faith into one unit of 45 points, in either case the end result was the same. Couldn't remount....couldn't make an armor save, didn't last more than two turns on the table. The Marders dispatched of this unit pretty quickly! 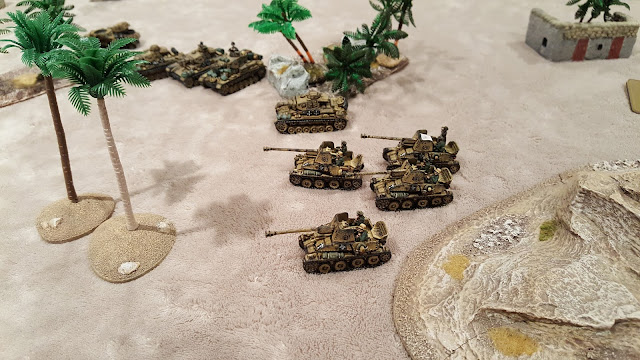 With the two hour window, and enemy armor closing in, I made a last ditch effort to try and get some PAK AT shots into Tristan's armor to no avail. 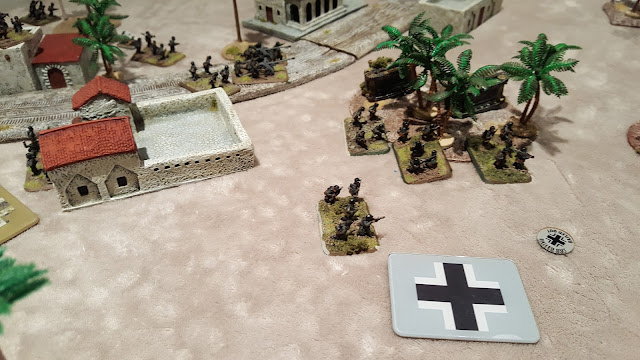 I conceded the game at this point, there was no way for me to get an outright victory and we were equally happy with pushing back each others initial attack. During the first few turns of the game, neither of us really wanted to sit back too much. I couldn't afford to, even with fewer units on the table, I had to make the most of what I did have and get a unit kill or two in the early part of the game. Tristan had to push harder as he did not want to wait around and see the Tiger unit take the table either. He made the most of his opportunities and as you'll see in the video below, I couldn't make use of the Tiger unit very long.


~If you haven't already done so, please subscribe to Dennis' YouTube channel. he's MattVarnish on YouTube and has a variety of videos on painting, battlereports and even some of his epic runs in 'Elite Dangerous'~