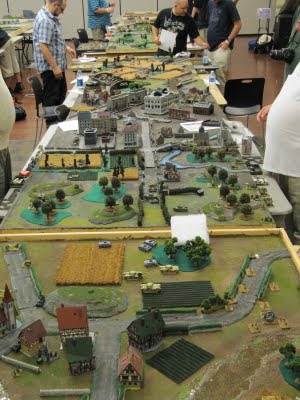 (above) The whole 8 tables. I had to stand up on a chair for this shot, but you can see we actually managed to make enough scenery for 8 tables.. and as you will see, we didn't even have to stretch it out sparsely.

Well, Ottawa's first Flames of War tournament was yesterday, and it was a blast. We ended up having 14 players with room for 2 more if needed. Some came from across town, the OMG (Ottawa Miniature Gamer's) guys, some from CFB Petawawa (Army base 2 hours NW of town) and Shawn Morris came all the way from the Prairies (he has family in town, so timed his holidays with our event, now thats thinking!!)

We played 1500 pts, Mid War, was not theatre-specific, and the missions were, in order: Encounter, Free-for-All, Fighting Withdrawal

Without further ado, I will let the pictures do the talking:
Note: Forum names in brackets if I remember the names! 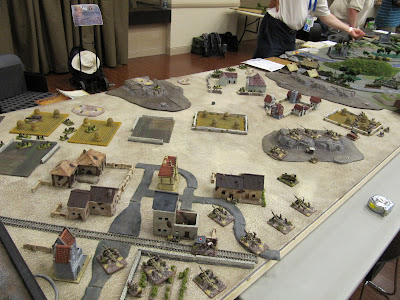 (above) Before we started round 1, I went to each table for pics. I know once a tourney starts, I get the "tournament headache" and blinders on so will forget pics.. this one is of my Brit Rifles vs Tristan (Ca$H) german infantry list on the Italy board. 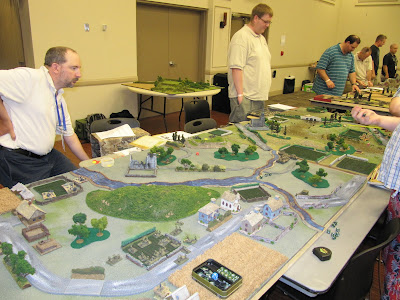 (above) Jeff's german Pionieren vs Marty (Joyous Oblivion) US Armoured Rifles. on the river crossing board 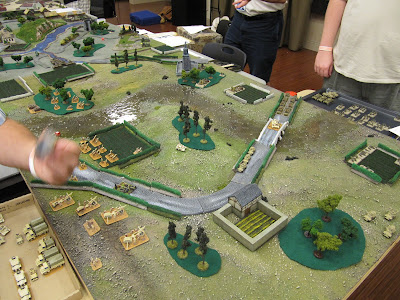 (above) Adam (Clockwerks) Desert Rat 25 pdr battery is trying to range in on Mike A's Aufklarungschwadrone trucks all clumped on the road. Sadly, the dice shaking mojo pictured here only produced 3 fail-to-range-in results!! 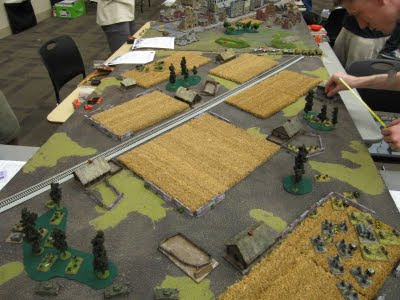 (above) Chris (Lothann) Soviet Tankovy list have the home court advantage vs Shawn (TerrainGuy)s german force on the Ukrainian table. Ukraine not Weak!
By Matt Varnish at August 14, 2011