Just a few fun pics.. I was looking for Datacrons on Tattooine, when I saw a curious ledge below me in a Republic quest area. Since I reckoned that Datacrons are hard to get, and this ledge seemed "too perfect" I dropped in, and went along the ledge for quite a while. It required me to make a few jumps, further reinforcing the idea that I was on to something, until it led down to an open area of sand. Turns out, I was "off the grid" and could see laterally into the next area, the Dune Sea, and could see UNDER the dune sea. Pic below 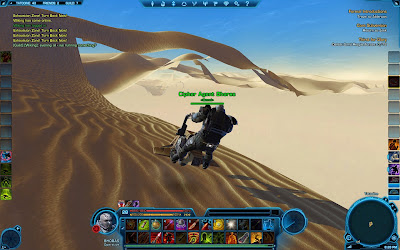 You can see the Sarlacc Pit way off in the distance, but from the inside out. 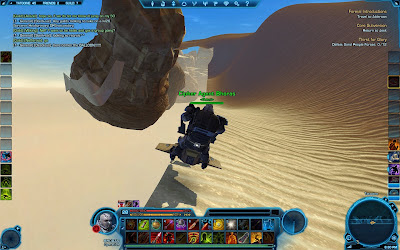 And turning around, this was the view, again, the map designer put all this stuff out here, the rock, sand etc, so that when you looked out from the Republic Landing pad in north Jundland, you would see wasteland. He didnt bother finishing underneath or behind, so left it as "edge of the world" Look at my minmap, you can see the hard edge of the map "border" My map said I was just generically on "Tattooine"


Hilarious, reminds me of GTAIII where you could fly underneath the world in the Wingless Dodo.
By Matt Varnish at February 27, 2012