So I picked up the Battle Missions book last night and started to take a gander at some of the missions inside. I must say that I am really impressed. First off, the cover art: 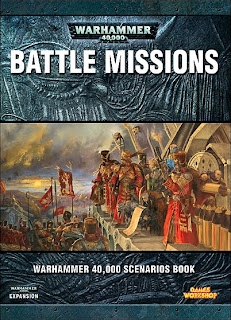 Wow, pure awesome-sause!. But really what grabbed me was the way they incorporated Universal Special rules and Scenario Objectives. The simple reason is that this Battle Missions book will work with ANY version of 40k; past, present and future. The layout allows the players to randomly roll, generate based on a story, or just pick the ones they like. There are no specific 5th Ed. rules, so the longevity of the book itself is a great reason to buy it.

We plan to incorporate the Battle Missions into Friday Night Fights - so expect some commentary and battle reports using this new resource. Instead of reviewing each scenario, I feel we would be better off reviewing them as we play them - so stay tuned!

Email ThisBlogThis!Share to TwitterShare to FacebookShare to Pinterest
Labels: 40k