Hey gang, here's a quick battle report of my Pre Hersy Night lords vs Hamilton Ian's Guard army, at Black Knight games in Hammertown. Speahead deployment, Annihilation. After winning the die roll, for whatever reason, I decided that since my guys are 'baddies' I'd give him the tablequarter with a giant green pool, figuring he would deploy his tanks tightly packed in the one area left to him, and I could fire away at them with my 2 freshly painted Devastator squads in the giant church. He opted instead to simply reserve everything. Here is my deployment: 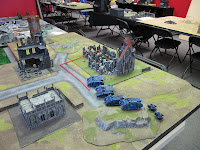 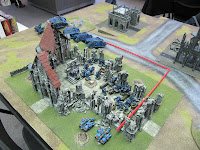 Since I had first turn, and he had everything in reserves, in by my end of turn 2, I had advanced way up, and awaited his arrival: 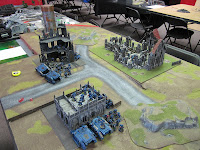 He fires his basilisks into the church area, hoping to kill many, but he got very unlucky with scatters, and his Russ was the only thing that caused any wounds. 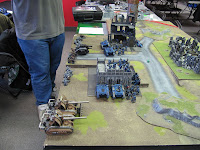 I charged his Basilisks with a tactical squad, only took the battle cannon off the russ, despite 90% of my army shooting into it, and then he moved his infantry in.. but by now I was way too close. He had one turn of shooting, and was facing: 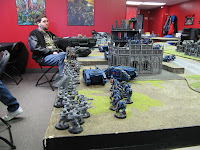 An insane amount of tank shocking with my rhinos mopped most what was left, so Ian conceded:
Also, my librarian is busy checking out the new Dark Eldar Codex... he it MIGHT be out by the year 30k! 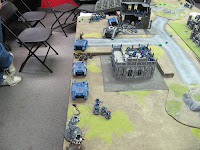 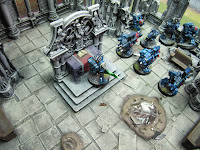