Well, third bat rep here.. My second time using the new Tyranids (again, the codex isnt out yet, so Im using the leaked summary) and same list vs Ca$h's Emperors Children. I filmed this on my new camera, but it turns out that the battery was low, and also each pre turn snippet was 160 megs, so I need to plan out the video taking a bit better for next game.

Mission was Secure Ground, with Spearhead deployment, using ripper swarm bases as the 4 objectives. I put my Tervigon up in the building, holding that objective, with the tyrant and termagants moved forward.. Missing are my Hive Guard which I simply forgotten to deploy.. I rolled to reserve them turn 2 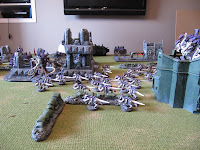 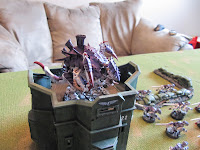 Cash Deploys obliterators across from my Tyrant, and then moves up, lashing my termagants back in turn one. 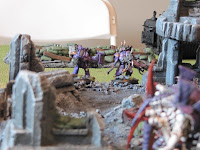 Turn 2, he backs up the rhino with lash sorceror, while disembarking the noise marines to try and kill the Tyrant. He thought that they were t5, but with t6, his str 4 guns did only 2 wounds 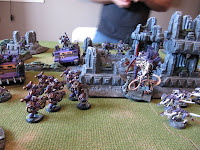 After the shooting he had to assault, since he knew I was going to charge him. Tyrant typically fails to do many wounds.. 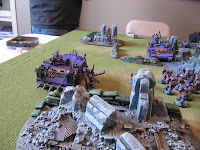 Now at this point my camera died, but my Hive Guard came on right behind the ruins in the foreground of the above pic, and shot at the rhino, and did nothing. My large brood of termagants moved up and helped the Tyrant out in combat, doing the wounds needed to wipe out the noise marines. My Genestealers outflank left and right, taking out a 5 man noise marine squad on his objective on the left, while on the right they charged a vindicator, and were then destroyed by his terminators.
At this point of the game, with Zoanthropes and genestealers still incoming, it looked grim for Cash, and I was feeling very under-the-weather, so we called it there.

Thoughts regarding new Tyranids. At first Lothlann and I discussed the spore mine's ability to prevent the enemy from deploying in his own DZ in dawn of war missions, but in 2 games so far, havent even proven to be a nuisance. Luckily the do not give up KPs. So I'll probbaly ditch them.
In 2 games, the Mawloc wasnt up to snuff. Sure on paper its ability to come from underground and do str 6 ap2 hits is good, but thats if it doesnt scatter.. Against Loth, I stunned a manticore, then got plasma gunned, and vs Cash, it scattered off the Oblits, and would have been shot to death by them plus the land raider plus terminators.
Hive guard. Again 6 str 8 no los shots are good, but they seem to be best vs vehcile squadrons, and I think 3 is overkill.. I might go with just 2. Zoantrhopes.. they still havent had a chance to drop and kill a Raider, as in my game vs Cash, they never came in, so verdict is still out on them for me.
Genestealers.. well I have 3 large units coming in. I think if I didnt have these, the mawloc would have more of a role to play, but seeing as I already have 3 units of outflankers plsu the Zoan's coming in, I will pass on the mawloc/trygon. I might bring them down from 12 to 10 though
Termagants/Tervigon: So far they are stars of the show, as the enemy needs to deal with them. I dont even have poison attacks on the Tervigon to pass along to the Gants..

So, I am thinking of building a Tyrranofex with my Trygon kit. yeah its 265 points, but can kill vehicles turn one.. rather than waiting for turn 2 if I'm lucky for zoan's to come down and roast a Raider. if its by turn 2.. that means he has already driven forward 12 and popped smoke. 265 points while expensive, can put the shots on turn one, and can advance while doing so, and hopefully soak up some firepower that right now, frankly, my Tervigon is eating up.
So yeah.. a few more tweaks here and there and my 1500 pt list for Locara will be finalised