Here is a quick rep of a battle at bayshore Jan 4th vs Lothlann's Guard. Dawn of War, Capture and Control. I used the list from previous posts, adding in 30 points of spore mines, leaving off Venom Cannon on the Tyrant.

Initial deployment, I had Tyrant, Tervigon and large unit of Termagants, he had a command squad on the hill to push me back.. I went to a flank instead: 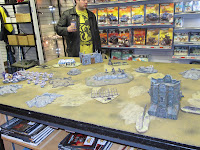 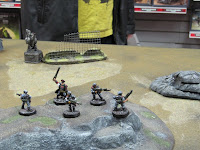 His turn one, I was facing this: 2x Medusa squadron, Squadron of 1x Medusa, 1x Griffon, Chimera, Manticore, 2 Hellhounds AND 2 Vendettas. Thank god first turn was night fight.. though he used on vendetta to searchlight my Tervigon and did 3 wounds to it, 2 wounds to the tyrant. Note to self: vs pie plates, spread them out a bit, otherwise he gets wounds on both with each hit or lucky scatter! 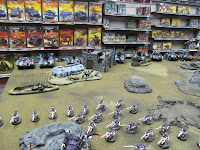 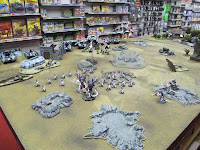 Turn 2/3 the Hive Guard (Warriors in foreground) walk on and destroy a Vendetta, and a lucky unit of Genestealers fleets, then charges the griff-medusa squadron AND the chimera in a nice multicharge, blowing all 3 up! I move spawned termagants forward to try and take the Defence Laser objective. Medusas kill off the Tervigon, which I had moved back so it didnt kill my termies.. 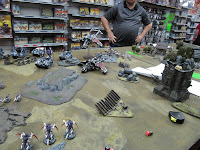 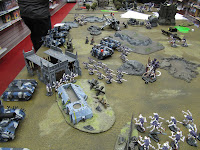 Turns 4-5: Veteran squad takes the Flak gun objective, and I deepstrike my Zoanthropes to contest, since my other Genestealers looked to be out of reach. Close up of Lothlann's excellent medusa conversions.. and at the end of turn 5, a Tyrant and 7 genestealers FAIL to blow up a gun-less hellhound contesting the Defence Laser.. weak. Draw game. 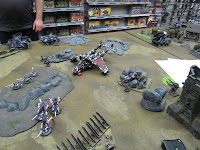 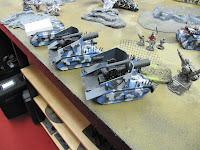 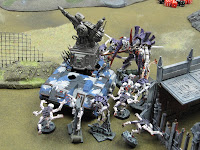