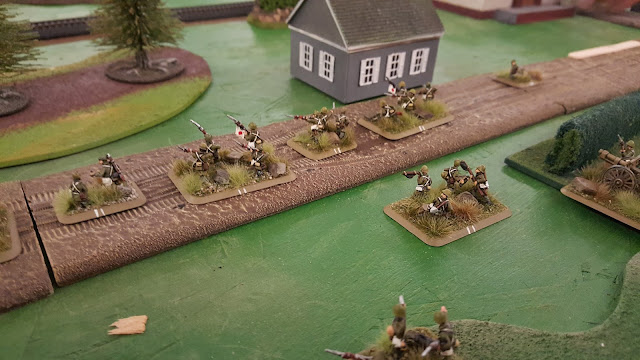 Game 1  Free for all vs Kurt R, Japanese: 1 large infantry group with banner, 5 tanks, 3 sets of guns, 1 infantryno banner.  He night attacked, and moved up and hunkered down,knowing I had too many MG shots for him to assault.   I didn't want to just sitzkrieg, so foolishly moved up  He clipped some Fearless Conscript tanks and also got my coastal gun-trucks.. my mistake there.. and then realizing we would just trade shots I knew I had to try and take out a platoon.  Only thing not dug in was his Tanks, so I killed them all but 1, but with Rgmt Banner nearby, auto passed his platoon check.   1-6 loss for me, though I wanted to say I have assaulted Japanese, and did so on the short flank. 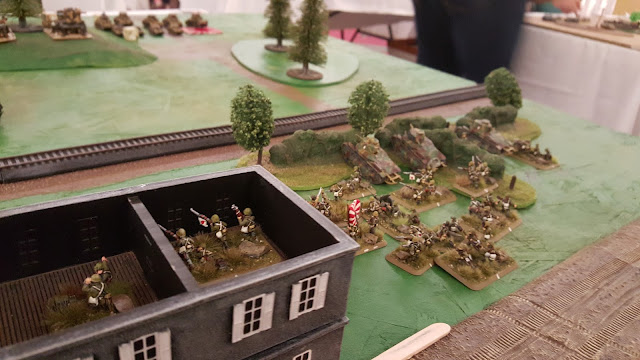 Kurt moves up at night to these hedges 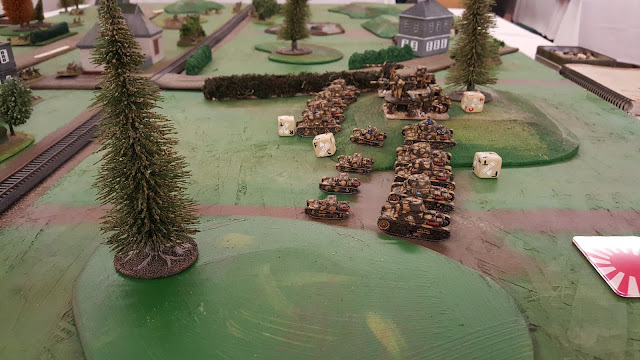 I drive forward, and fail to Avanti anyone in the dark.  You can see where my coastal guns would be hit by arty fire on the front platoon... 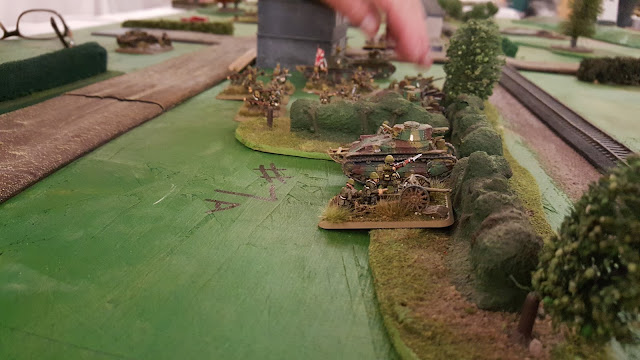 his 3 units of guns and his tanks make it so I will lose if we just trade shots, so I try and go for a platoon 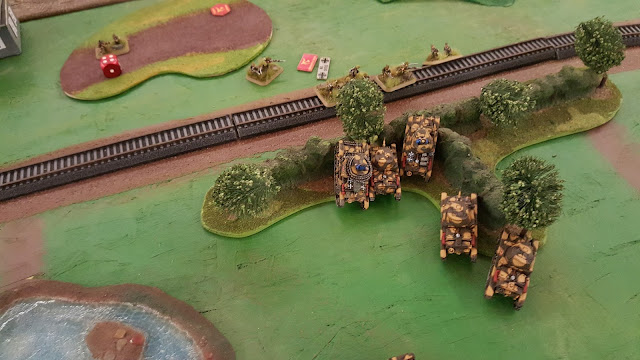 Just to say I can.. I assaulted some Japanese, and lost more to bog checks than anything else.. 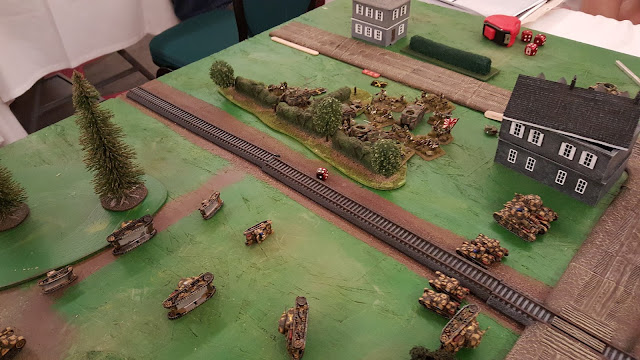 My final desperate bid to at least kill a platoon fails (side shots kill all but one tank, who auto-passes)  1-6 Loss


Game 2 Andrew Ludon,  He was running british in Norway, so snow bases.   2 units of trucked 2lbers, 4 18/25lbrs, HMGs and three big guards platoons.   I double time most of the way towards the hilltop objective, not knowing I could never reach it because of a small 'cliff'  On the way my gun trucks were trading shots with his 25 lbrs, my tankettis were mopping up each piecemeal guard unit coming in from corner reserves, and eventually whittled him down to 2 platoons and broke him, since I couldn't claim the far objective.  Should have frontal rushed in hindsight, but wouldn't have broken him.  Table had a map and a card saying all the little things of rock were impassable cliffs.. should have looked at this more.  5-2 win 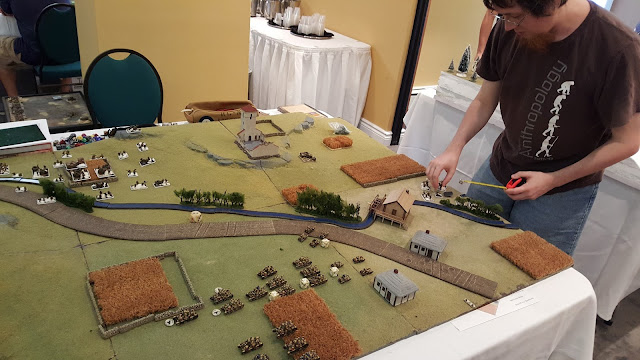 As the attacker, I have to sweep from front left to the objectives near that monastery, while his reserves come in from front right.  Since he had mostly infantry, the Tanketti MG's would be putting in some serious work! 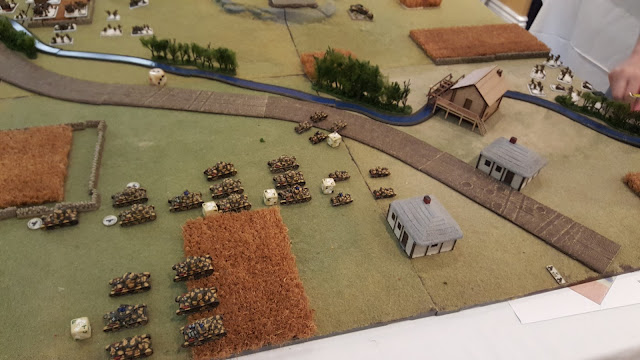 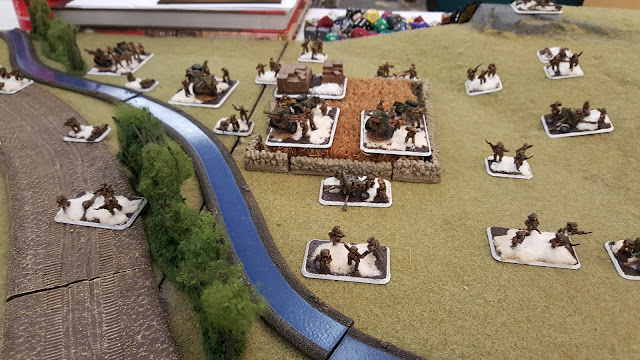 25 lbrs and 2lbr with infantry support on snow bases! 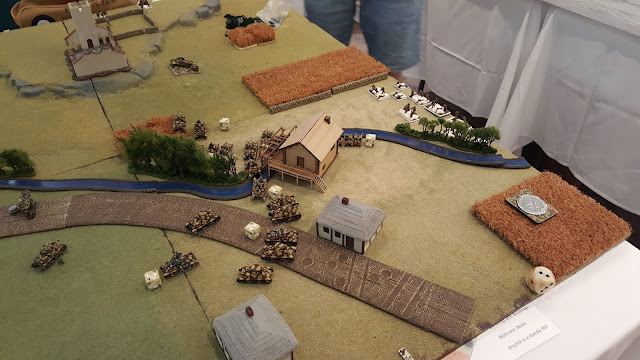 Sweeping around watermill to head up the monastery objective.. Tankettis stay to MG all reserves coming in. 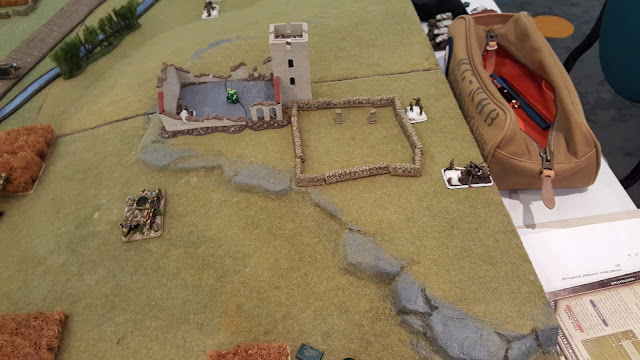 At this point all he had defending the monastery objective was a 2IC contesting, and 1 2lbr that had trucked in 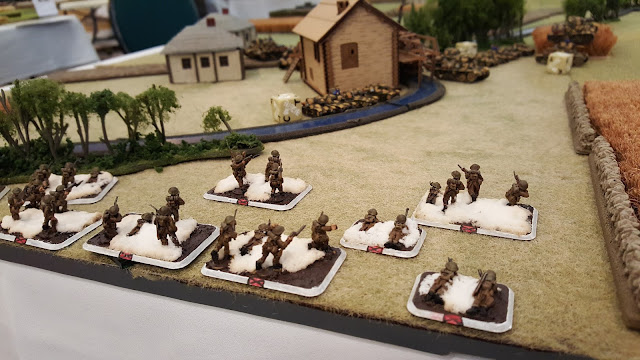 Murderous fire from the Tankettis... like shooting fish in a barrel.. felt bad for Andrew actually.. but as the defender he auto-wins if I don't take an objective.. 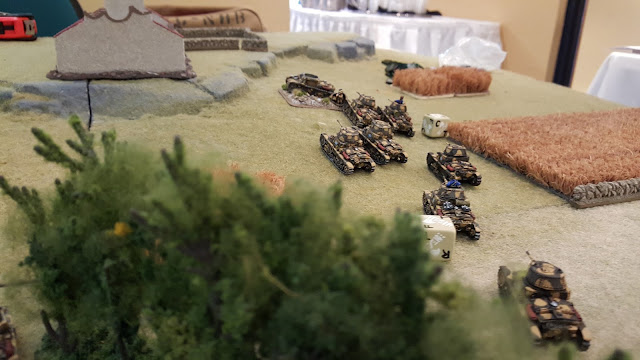 Its at this stage he points out I can't climb that last little bit to be in LOS of the 2IC behind the wall that is contesting.  So I go for killing platoons 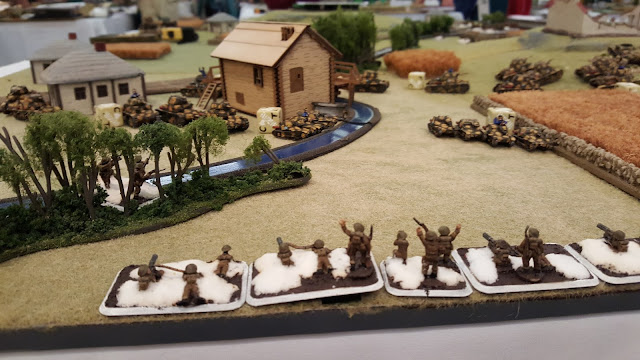 It seems like the same picture, but again his HMGs come in piecemeal in reserves to be blow away. 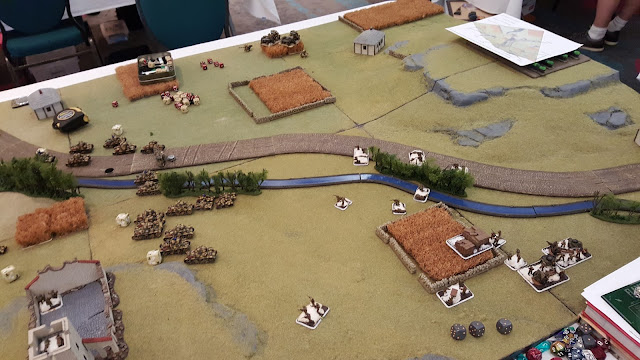 Final overhead shot, he was down to 2 guns and the remnants of an inf. platoon when he failed his company morale.  5-2 win.

Game 3 vs Doug Dunn, Tobruk strongpoint (AUS), No Retreat,  he had Jack Edmondson, 2 platoons in trenches, 2 units of 4 x 25lbrs, Tobruk HMG nest, 2lbr portees
I was able to luck out and get all 4 hits form the guntrucks on one set of 4 guns, and moved up the right flank with tanks.   Survived bad dice rolling from him, and was able to remount and wiped out platoon after platoon until I killed Jack and the CO, and he had only the Nest and 1 short platoon left, fails Company Morale 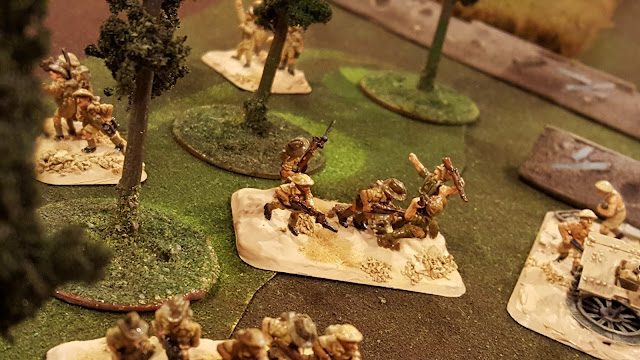 Jack Edmondson.. model in the Tilly hat bayonetting a german! 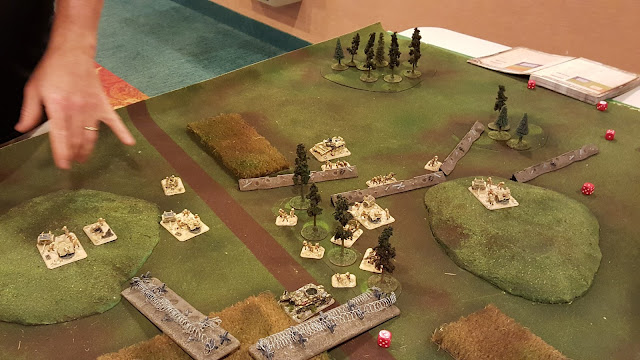 Doug's deployment.   Guns were not concealed... and so my coastal guns in their one moment of glory all tournament get 4 hits needing 5s, killing all four. 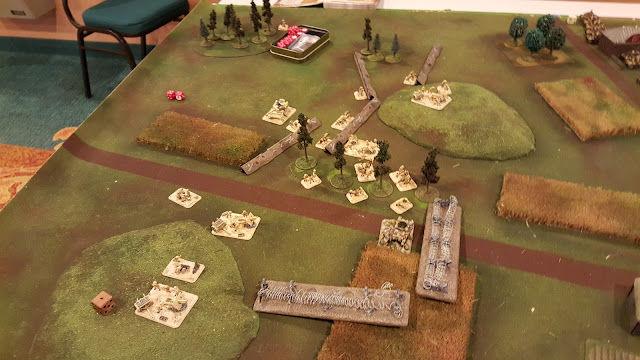 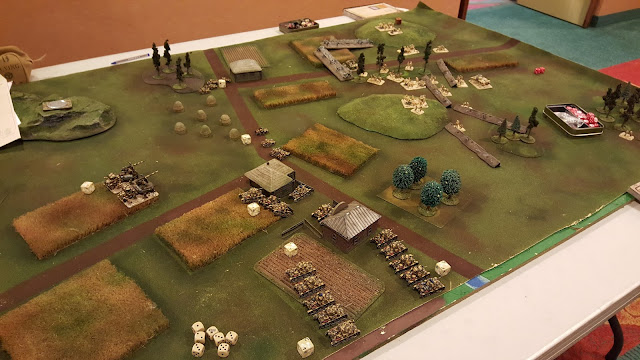 I advance on the right flank 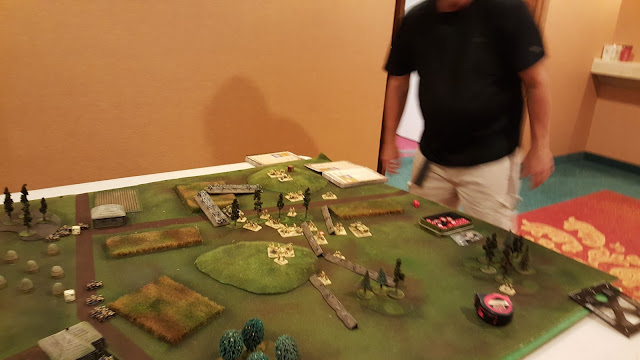 His 2lbrs and assorted reserves would try and stem the tide on the right rear corner, but like vs Andrew L, I would be able to wipe out each unit as they crept on the board.  Doug had abysmal dice, even his 2lbr portees were bedazzled by my camo and would miss most of their shots. 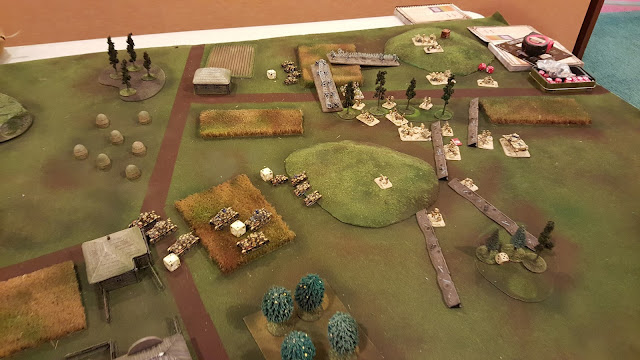 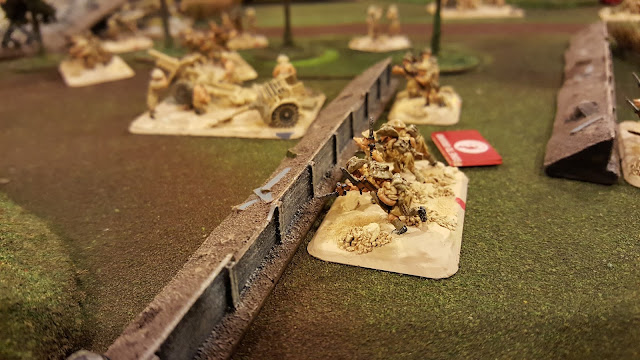 15mm head-swaps for Aussie heads.. wow.  I would never have the patience!! 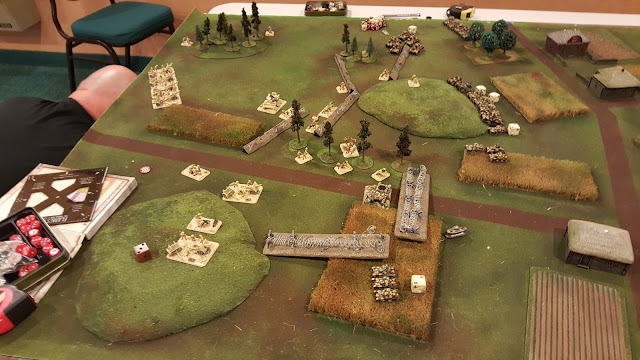 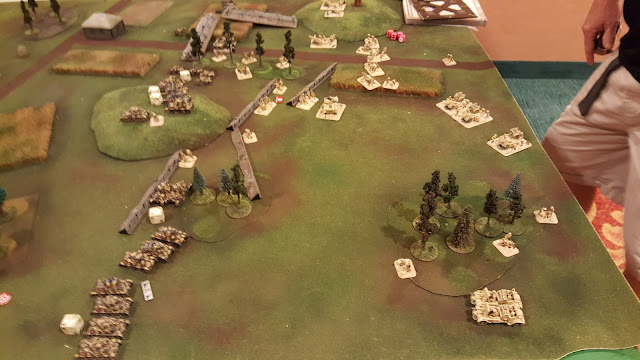 Fail to do much damage, fail to Tip-And-Run and get smashed.   Meanwhile I am assaulting the center..  5-2 win
By Matt Varnish at September 06, 2016