Where have I been? Well, recently I have been enjoying the summer with my family. Travel, camping, and not gaming in any real capacity. Frankly, its been just too nice outside to justify sitting inside and painting. Over a longer period though, I have not been playing FoW at all really. The odd game here or there, but it just isn't peaking my interests of late. I can't point to a single thing that has moved my interests, but I have been looking for escape in my gaming, and I have been drawn back to Sci-Fi and Fantasy settings. We have played X-Wing, board games, but what has actually gotten me back to the buying models, painting and the gaming table is Warmaching/Hordes.

In case you didn't know, Privateer Press recently released the third major update to the core rules, a "mark 3" or "MK3". And with it, new starter boxes and revised rules for all models. Having played the game a few years ago and quite enjoying it, I decided I would pick up a $40 starter box because they come with a full, complete color rule book. Despite owning several small starters/armies, I decided to pick a new one and start the new edition fresh. I chose Skorne:


I have also picked up a couple units and a mass of new paints. But again, why this? Why now? I guess a large part of it is that Joyous_Oblivion, Glitch, and Twin-Linked all play and were getting back in, but also a new store (https://www.outoftheboxcards.com/ ) started stocking it locally (5 minutes from home!!) and have opened up Tuesday nights for gaming. This has provided me an evening that I can work towards, and more opponents to meet and play. It helps that is on a quiet weeknight also. So I have started to busily work away on a fledgling Skorne force, and I plan to reboot my Cygnar and Mercs also!

After attending a couple Tuesdays, it appears a few more in our merry band are taking the plunge into Warmachine/Hordes. Our own Pripyat and Phantom_Rescue are picking up starter sets - I even managed to have a couple learning games with Phantom the past Friday, so lets take a look!

Here is a quick look on what I have been working on the past two weeks or so.

Not only did I paint the starter box: 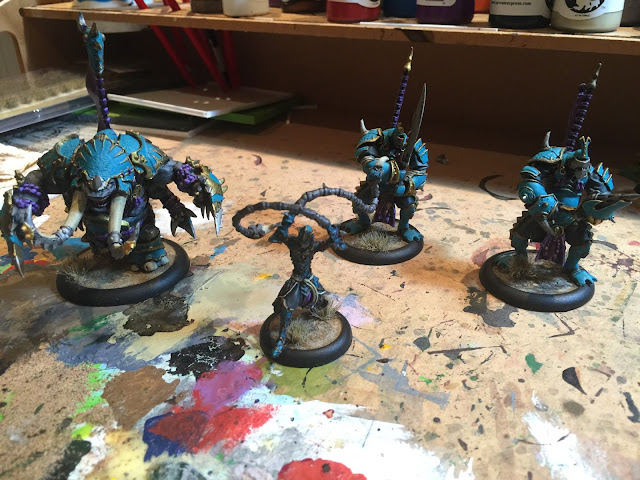 Being from the "Eastern Kingdoms", kind of a mash of up Asian and Persian aesthetics, I decided they needed arid bases. Up close on the arid basing: 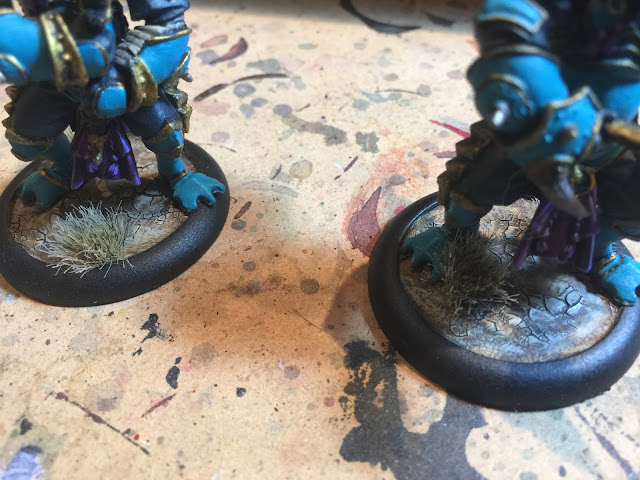 But I painted a Aradus Sentiel and a unit of Pain Giver Beast Handlers: 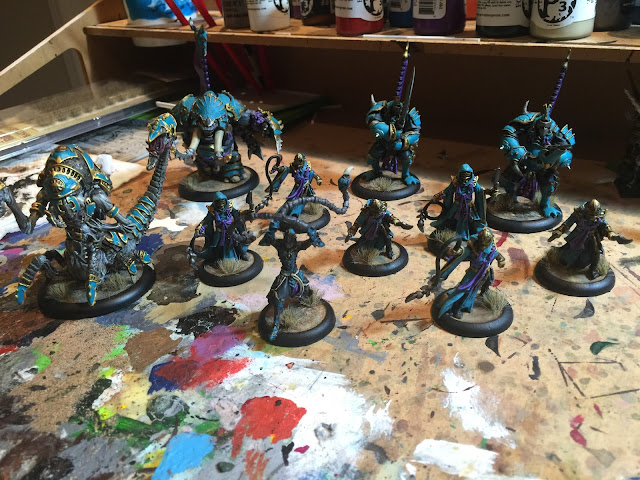 It is quite enjoyable to paint 30mm figures again, having spend years focused on 15mm. It's just a nice change of pace. Getting out and learning a new game, meeting new people and just playing more is also a welcome change. With the Dice Devils starting into a Journeyman League
( http://privateerpress.com/files/JourneymanRules2016.pdf ) expect to see and hear more about my/our adventures into Warmachine MK3 in the weeks to come.