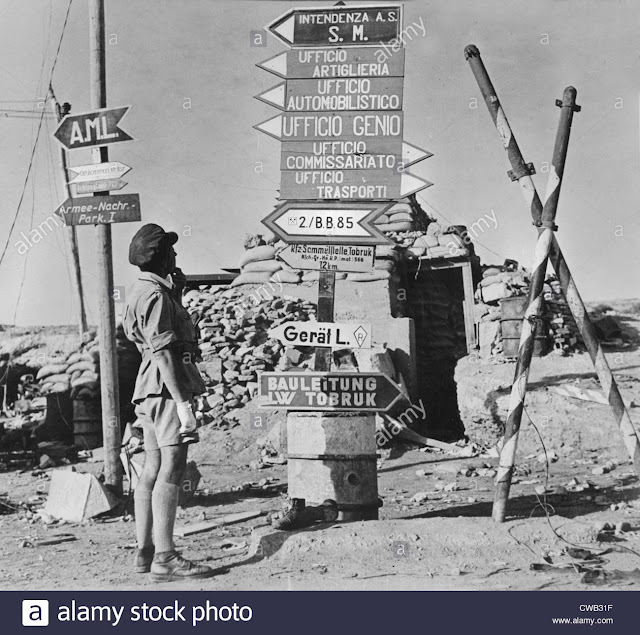 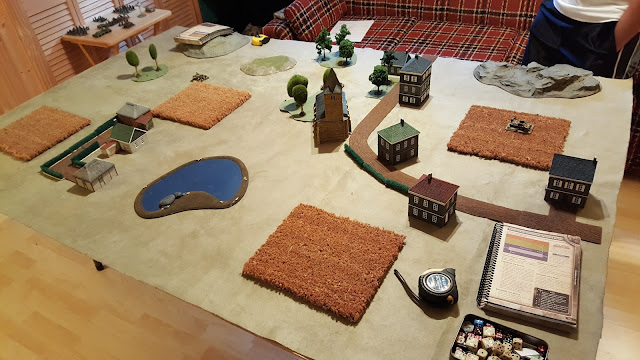 Matt's Basement of Doom, table set-up, Italians will attack from foreground to back, objectives already deployed with all three on his side of the table. 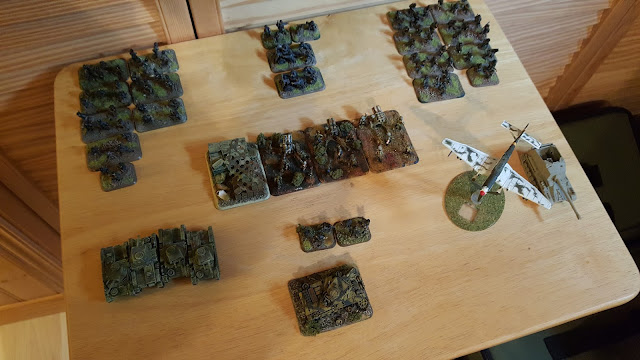 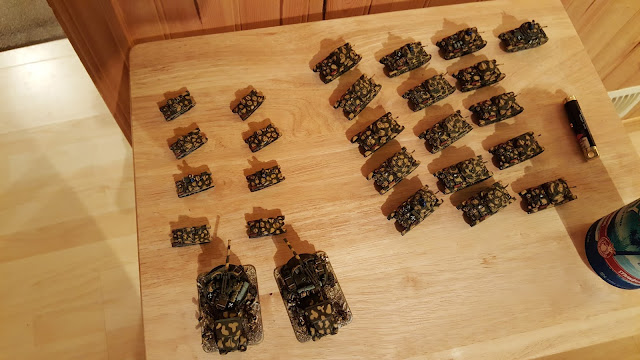 My still-undefeated Italian Carri Compagnia, 7-0 since May. 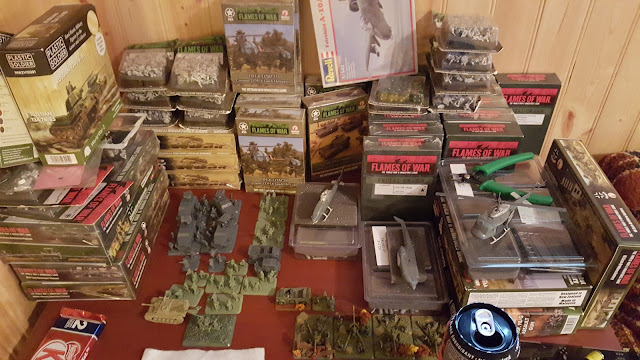 "Matt, where am I supposed to put my Palm Bay empties? There is so too much Vietnam stuff on this table!" (editor: To be fair, I have a lot of Flames of War WW2 stuff on the table as well.) 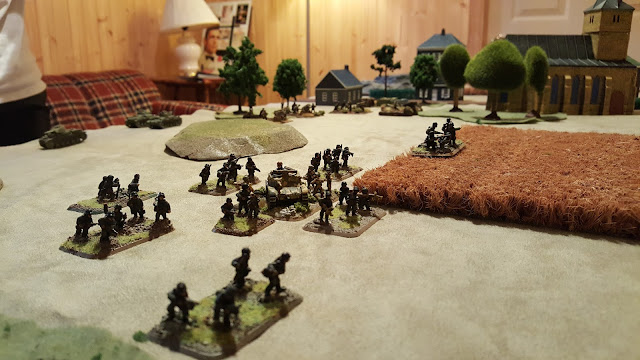 Matt deploys infantry on both flank objectives, Panzer IIs in the background are held in Ambush. 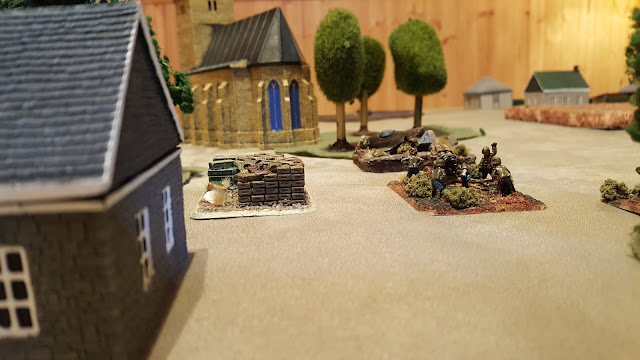 The center objective is behind some trees and is held by his Nebs.  Wish Afrika Korps could have Nebs in Early War, but what can you do?  At 125 points in EW, can't think of a better bargain.. maybe 8-Rads? 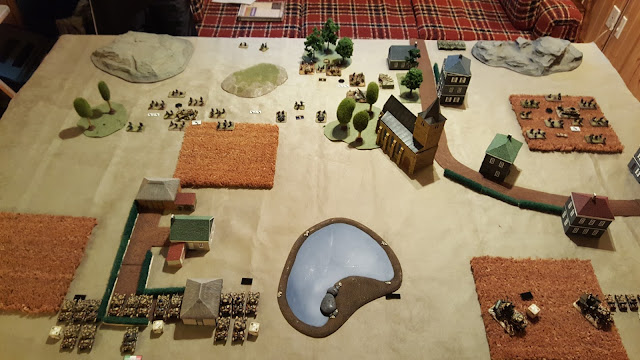 View from 1200ft: I put tankettes on the flanks, Coastal gun-trucks in the wheatfield, and 16 tanks on the left of the pond, to pressure one inf. platoon at top left of pic. 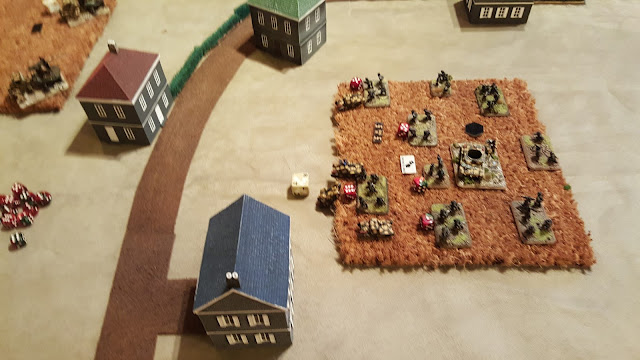 Turn 1:  Avanti!  The tankettes Avanti, and are able to pull off a turn one assault on the right flank infantry!  However, with front armor 0, they lose one to determined K98 and MG34 defensive fire! 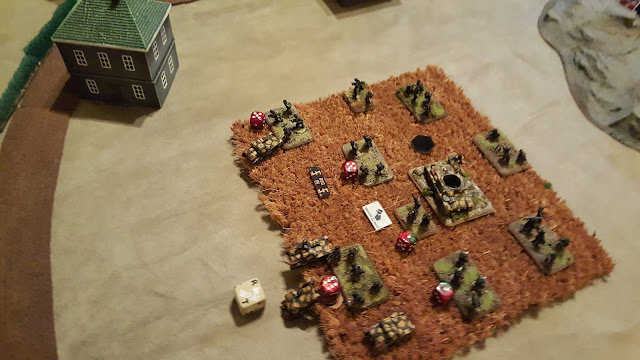 The 'RT' dice is my marker.. they are Reluctant trained.. so after killing only 1 stand, fall back after getting hit by potato masher grenades in combat.. rolling 5+ for morale checks sucks! 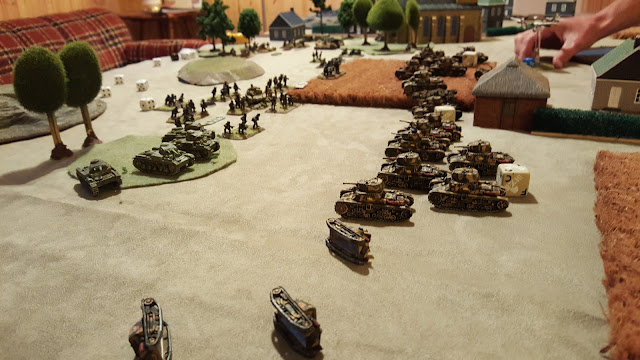 On the other flank, I had moved up my wave of M13/40s up, especially to deny the middle wheat field for Matt's ambushing Pzr IIs.  The tankettes opened up with their 16 dice of MG and pinned the Schutzen.  Bottom of Turn 2, Matt had to deploy from the small wood, and vaporized my left flank Tankettes.  Conscripts, always getting hit on 2's hurts!   Matt's Stuka had about 9 tanks under a template, and picked out a Conscript platoon as the concealed target, but rolled a 1 to range in! <better seen in the video> 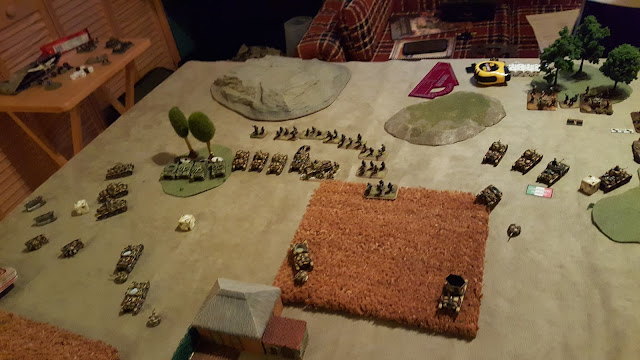 Turn 3, view from the Stuka who clearly was doing more observing than bombing, I managed to bail out three of four Panzer II in the woods, taking out the 7.5cm guns on the right, and pushed back the schutzen in an assault.
Avanti indeed! 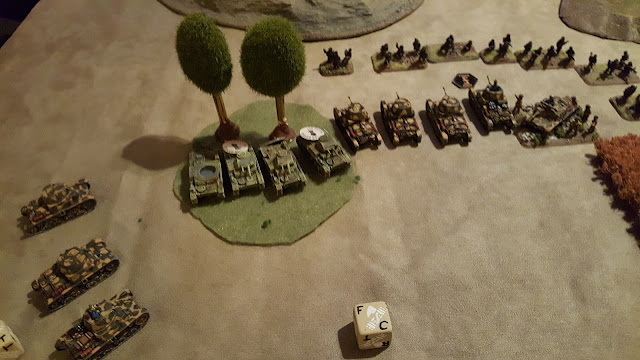 3 bailed out tanks.  They would come back to haunt me in later turns! 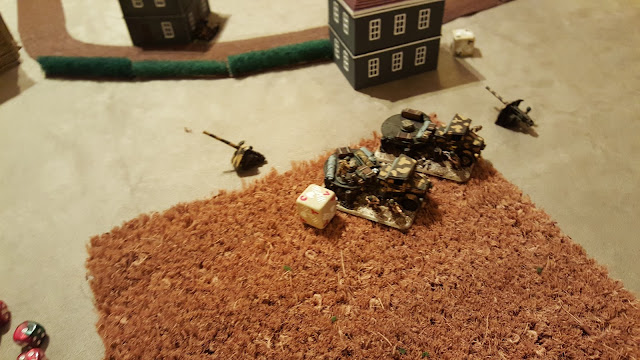 Stukas do take out the Coastal gun-trucks.
Would have been funny to make my 5+ soft-skin saves vs 250kg bombs! 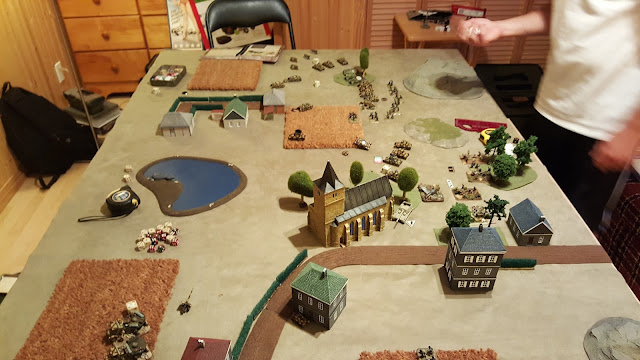 Side shot from the right flank looking across.  The bailed out Dicker Max near the church meant I tried to sneak into the middle with one of my tank platoons on turn 4. 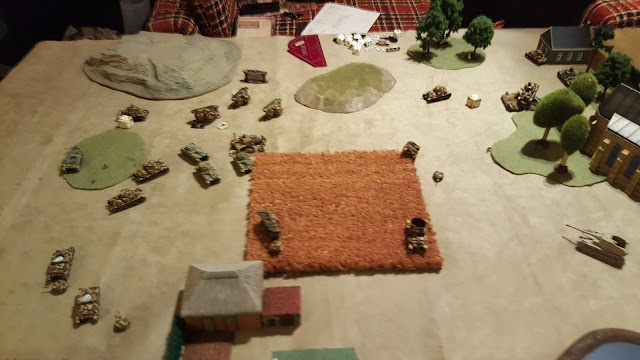 Turns 4 and 5, I have cleared out the infantry, yet I can't seem to touch those last Pzr IIs.  I am down to 2 tanks per platoon on the left, though the right-most tanks have pushed into the Dicker Max (shooting) and assaulted the Nebs (assaulting teams within 8 inches of your shooting targets) 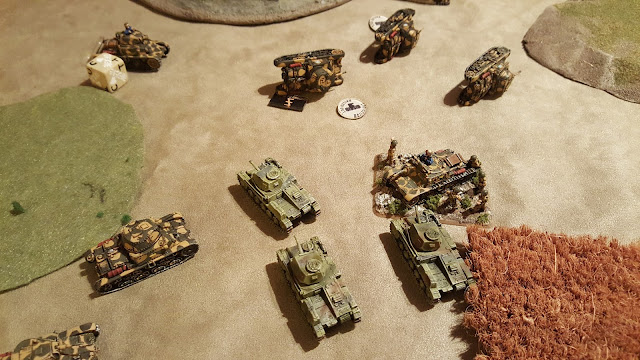 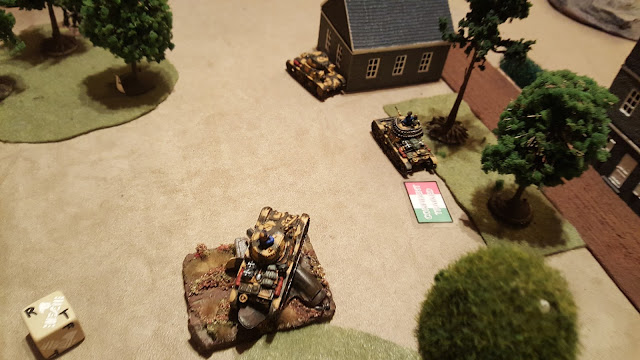 These 2 x Reluctant Trained tanks and the Tank HQ however have just killed their 3rd platoon! (Dicker, Nebs, 7.5 guns) 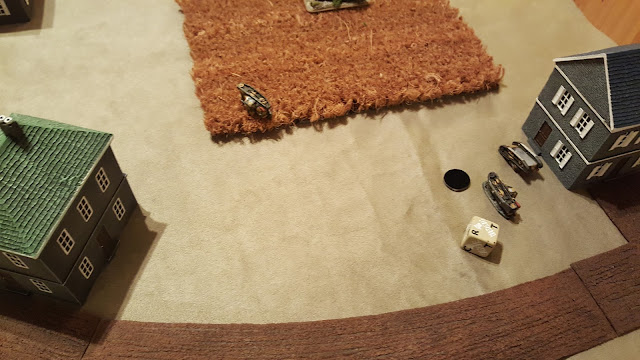 However the Play-of-the-Match might be Matt pulling the right flank infantry platoon, to leave just a 2IC vs 2 Reluctant trained Tankettes, one of which was bailed.   I had left the bailed out one and moved the platoon commander more than 8 inches away, to MG anyone who got out of their foxholes.  The 2IC rushes the bailed out Tankette, doesn't have to take Tank Terror (bailed out) no defensive fire suffered (Cmd tank 9 inches away), which takes my platoon to 1 active tank, 3 dead, and needing a 5+ (Reluctant) I ofc failed!

In the end, we were both into Company Morale territory, but I had brought him below half first (he had had to pull a platoon, Fighting Withdrawal, and lost the Neb platoon HQ to sole survivor before he could withdraw off the board edge) so it was a Pyrrhic victory, but I'll take a 4-3 win after such a bloody affair.

Video Bat-rep:  PS I had been drinking before this game a bit :)