Saturday saw a few of the guys get together at my place for a little bit of gaming and a quiet refuge for Dennis to paint his Italians. With lots of food, beer and some video games to pass the time. Weather up here is starting to get colder and the leaves are off the trees, so no more gaming in the workshop until 2015! 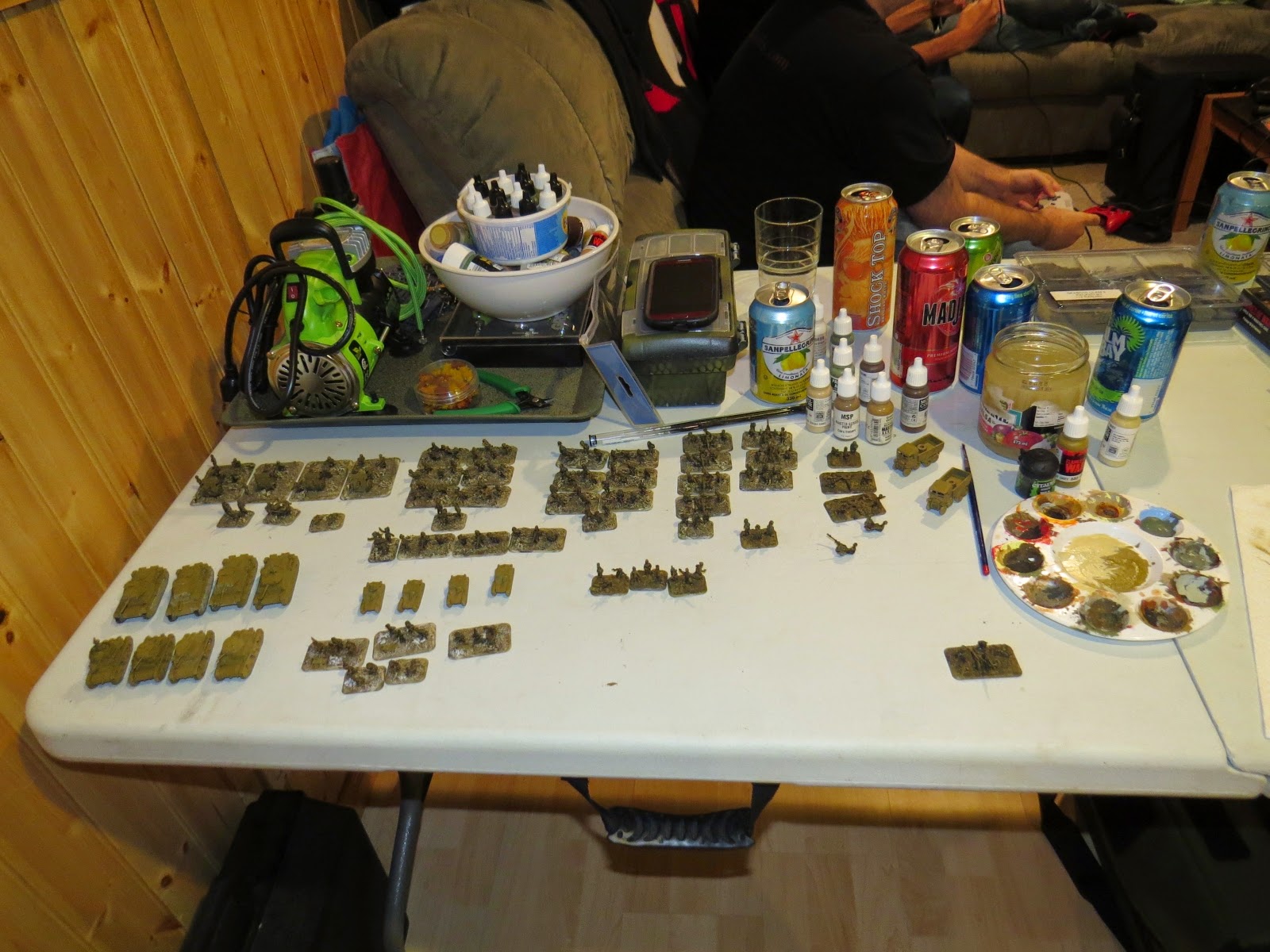 Painting?? Nope. I ended up playing a game of 'Fighting Withdrawal' against Andrew instead.


Andrew had a German armored list made up of three Tiger 1E's, Pzr IV platoon and a lone Elefant. Adding a small infantry platoon and some mobile AA 2cm on the back of trucks to protect his tanks from getting swarmed by aircraft. Who would have though about planes?? Certainly not me.......only in nearly every single list I have. 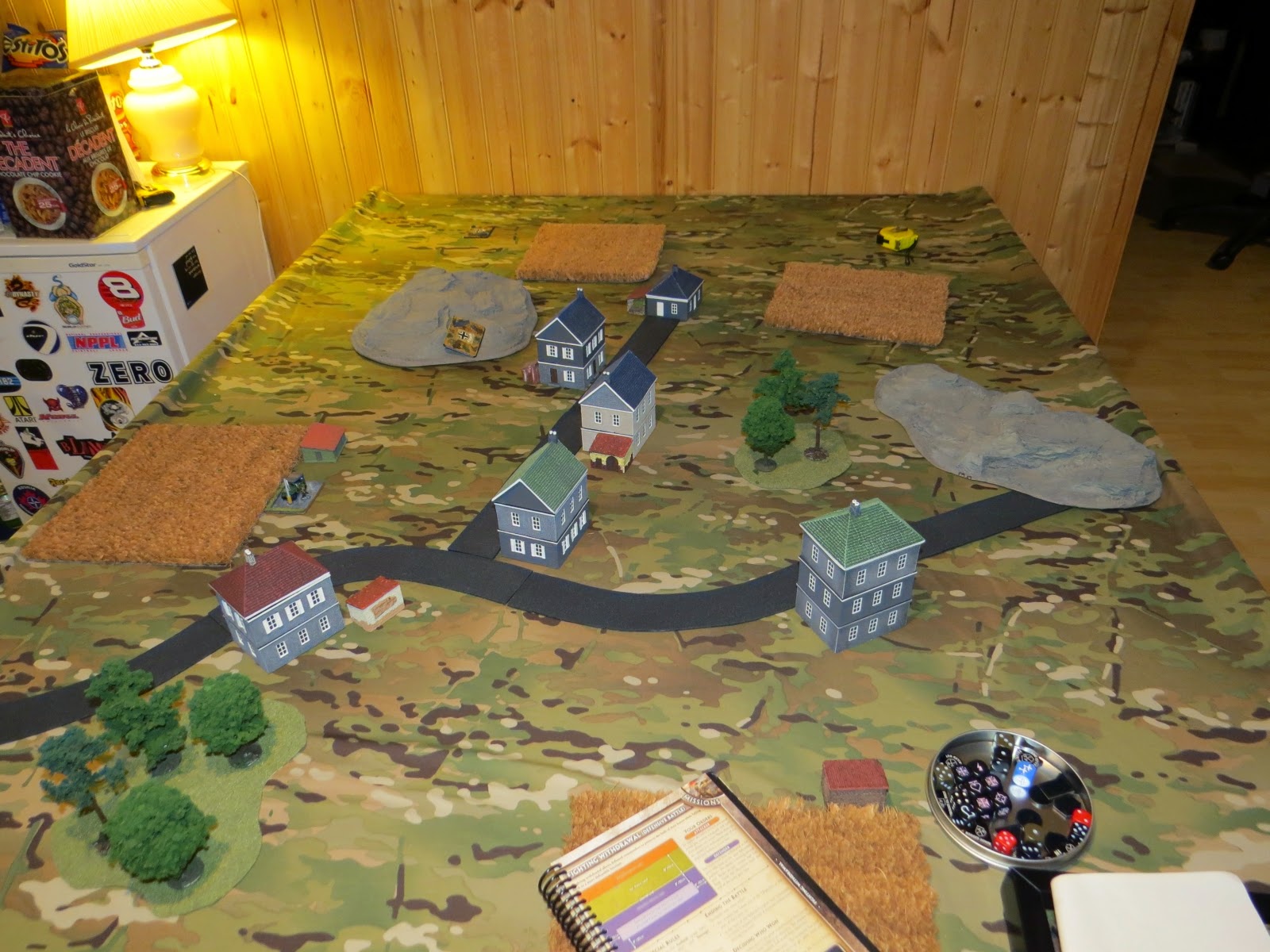 Objectives are down and I'm ready to deploy my entire force. I went with a Light Tank Company from Devils Charge. Four platoons total, 3 Chaffee platoons, 1 M-10 Tank Destroyer platoon. As mentioned, a lone P-47 with a seven dice pool and Close Air Support. That allows me to re-roll how many planes in the sortie and taking the best out of the two rolls. Andrew had never played against my Chaffee list, and airplanes are pretty much the only answer against German Tigers as far as the Light Tank Company is concerned. 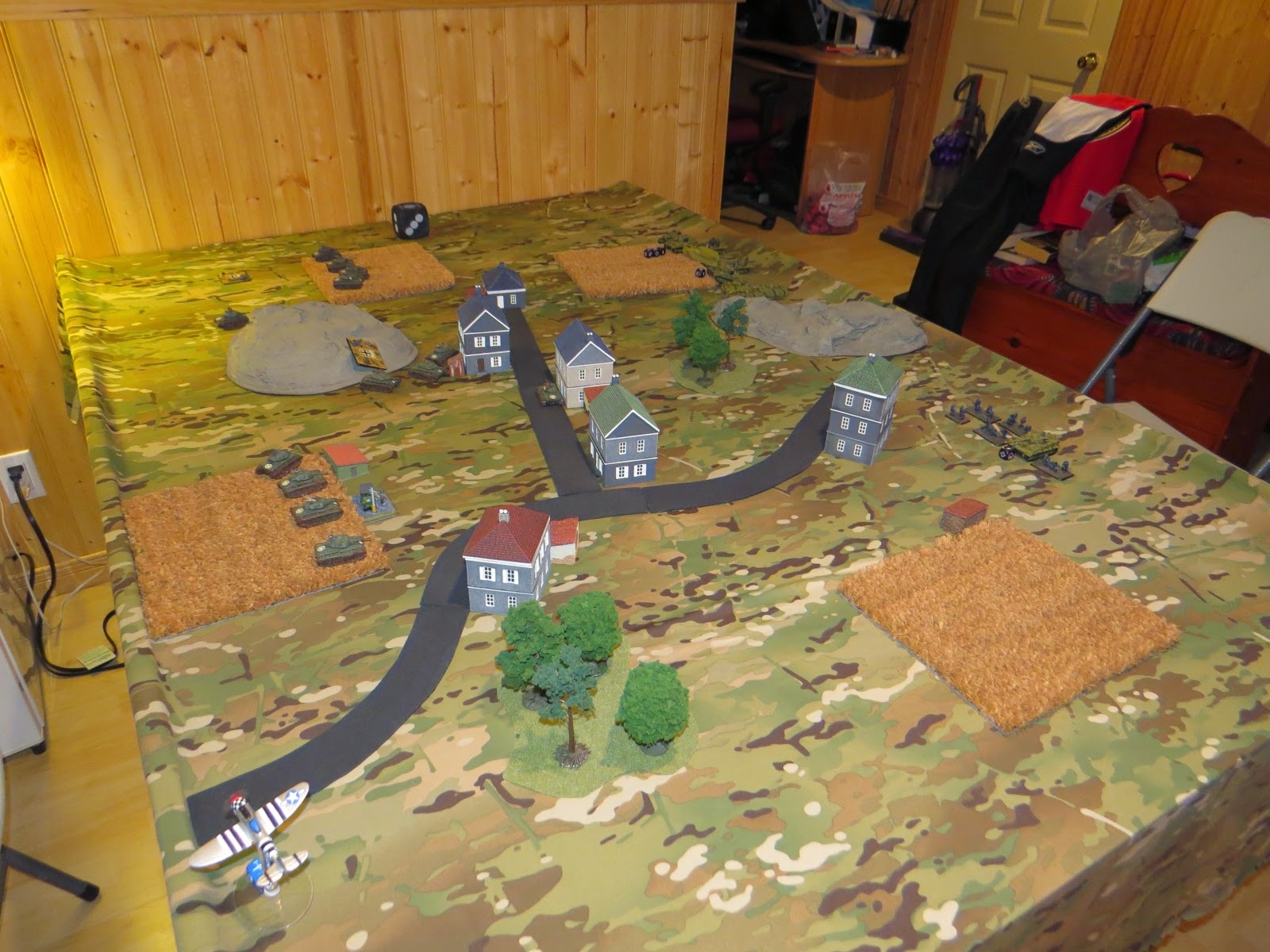 Fully deployed, the 2 I/C covers the road as the rest of the platoons find cover in the fields, waiting for the Germans to make their move. With only four platoons, it was going to be tough making it work in this mission. 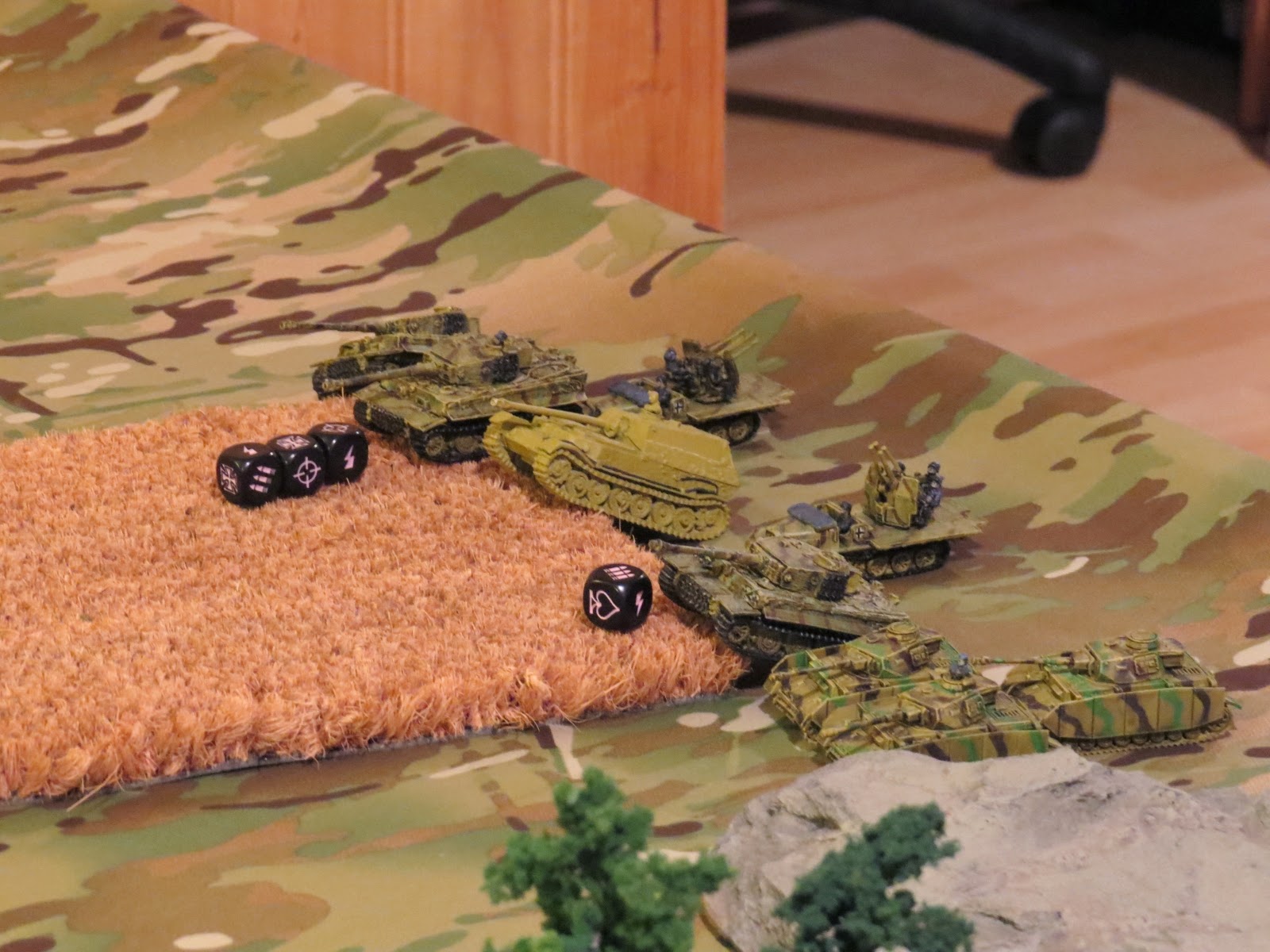 Andrew used a combination of cover, some from the fields on the table and the umbrella of 24" AA cover. Making it tough to get any of his armored platoons or even a single tank under an aircraft template nearly impossible. 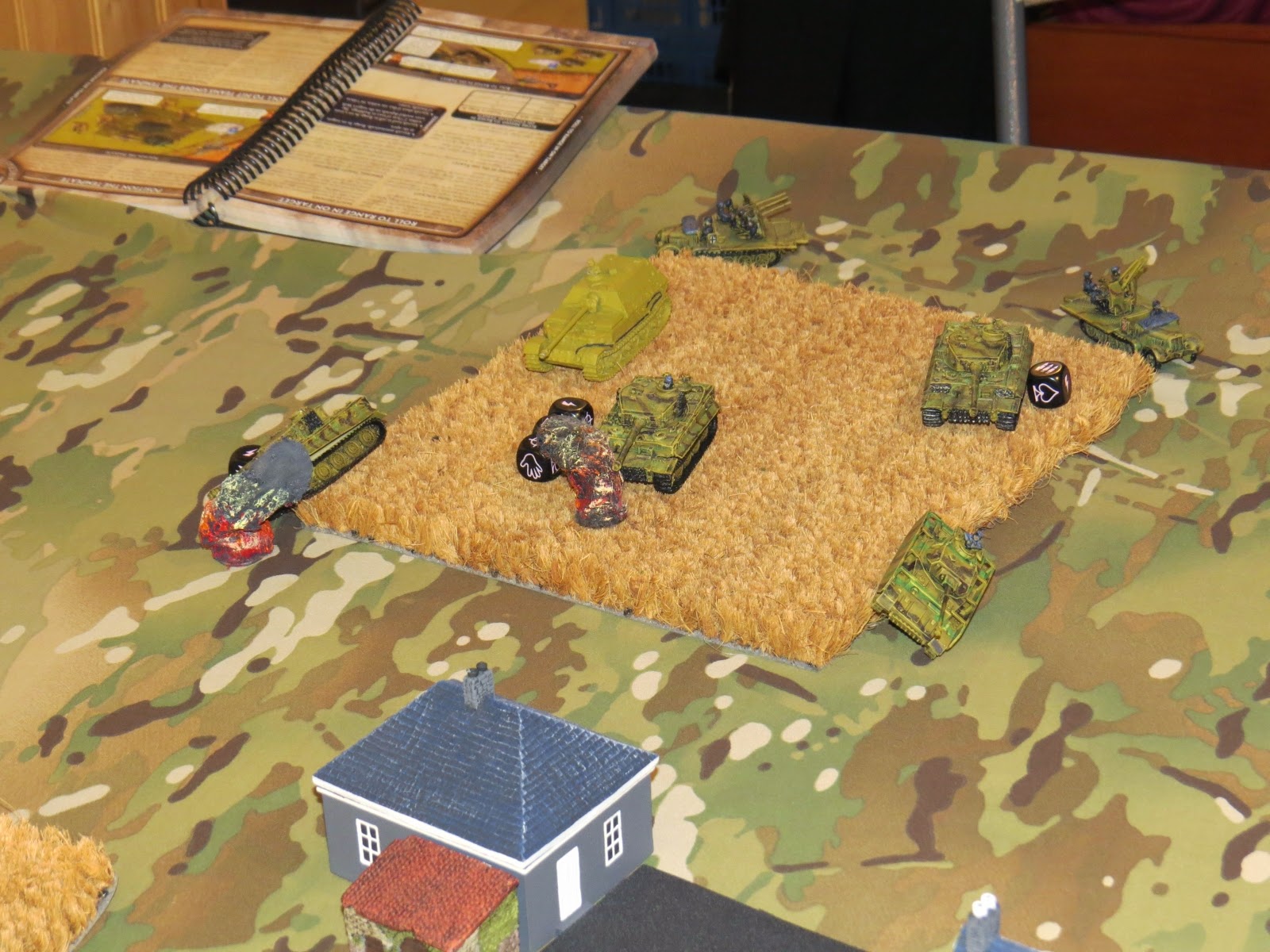 The Germans break out towards the far objective! The US Chaffee can do nothing but smoke the oncoming Tigers. Force them to move and see if you can't make them spread out a bit to maybe get your air on the table. I was thinking I would wait and see if I could use my M-10's in ambush to try and take a Tiger out. 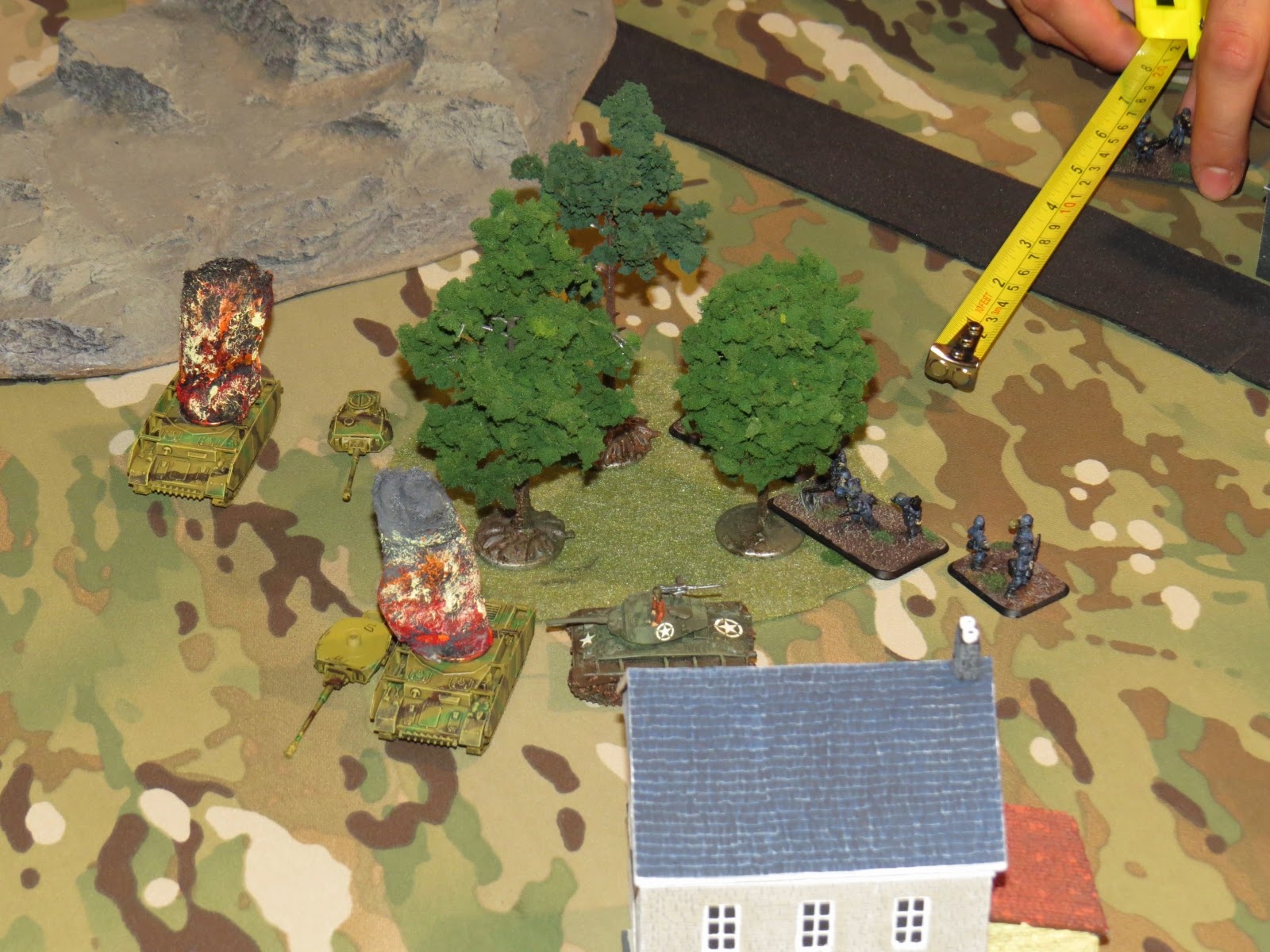 I popped a Pzr IV from long range and the 2 I/C moves in to take a side shot. He was a later casualty in a surprising move from Andrew and his small platoon of Infantry when he was assaulted. He was hit by a Panzerfaust, failed his armored save and paid the price. 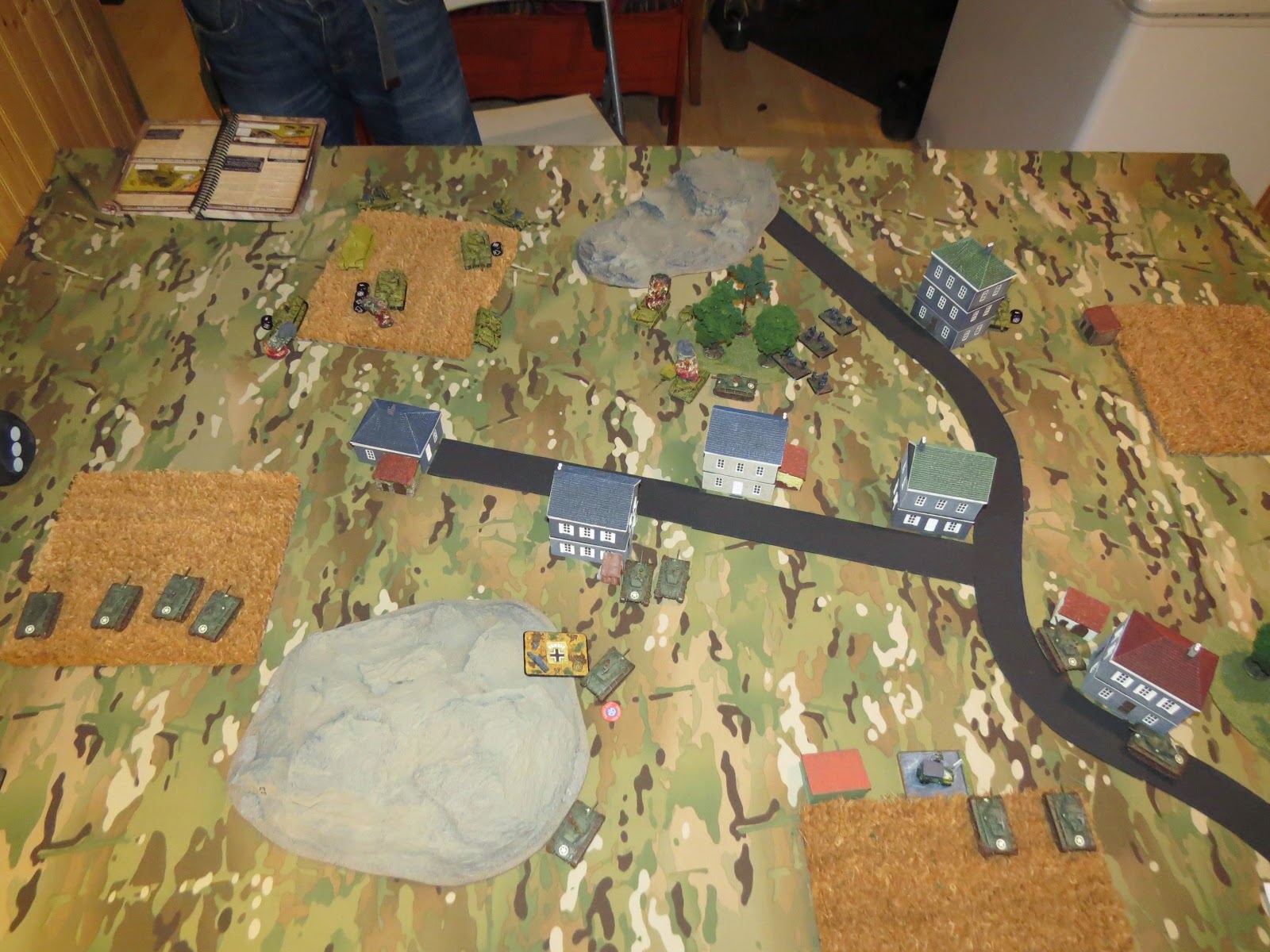 Top down view from my side of the table. You can see his Company Commander hiding behind the three level house on the top right hand side of the board. The Germans move through the wrecked Chaffee. They lose a few stands to a successful ranging in of MG fire from aircraft! They didn't stay pinned down long, but one more turn and they would be wiped out by US armored machine guns and a failed motivation test. 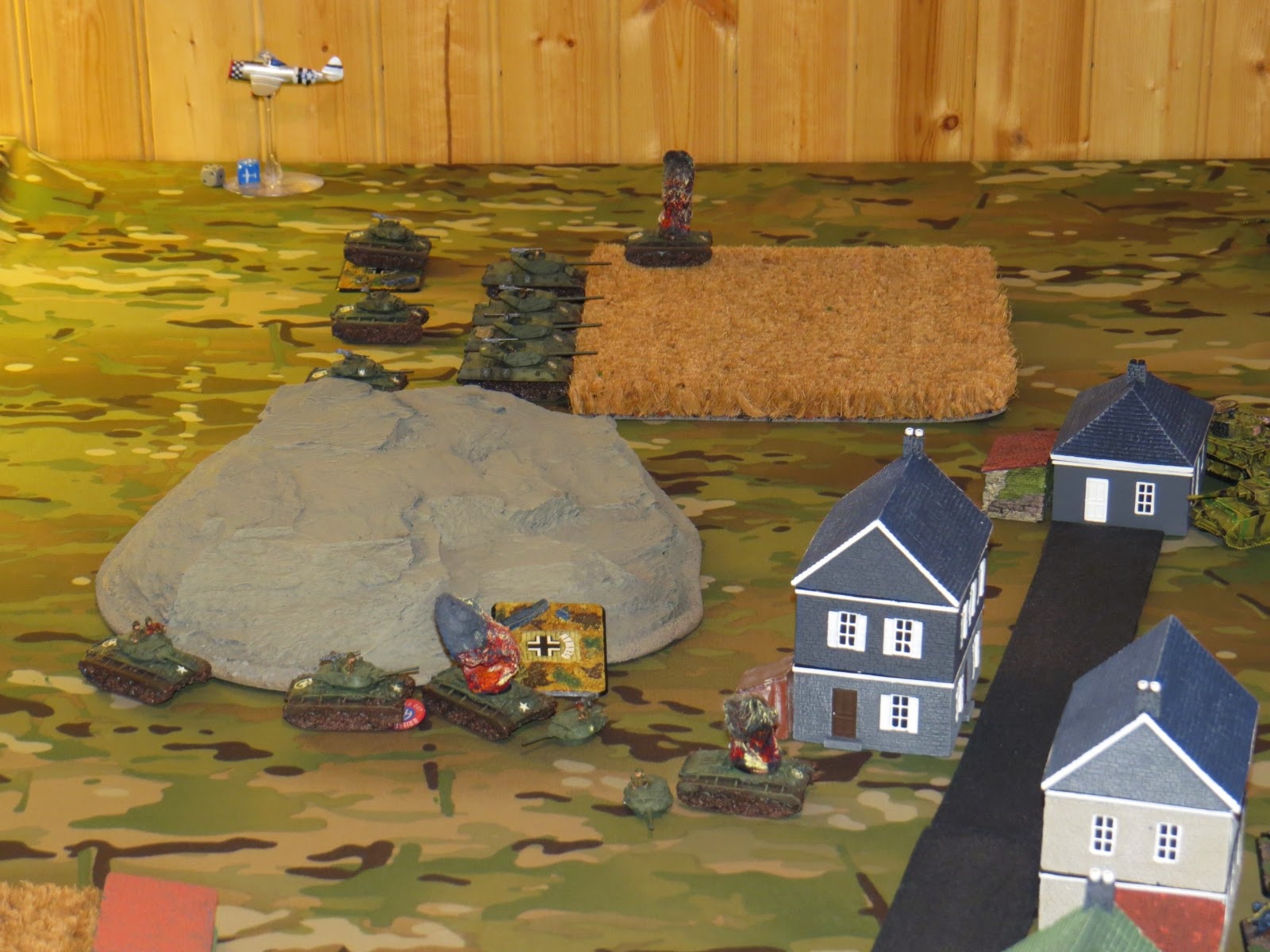 I popped my Tank Destroyers out of ambush and managed to get off a few shots. I didn't manage to kill any of Andrews units. I did bail a Tiger, but with protected ammo, the commander quickly remounted and organized his platoon into crushing the TD platoon. 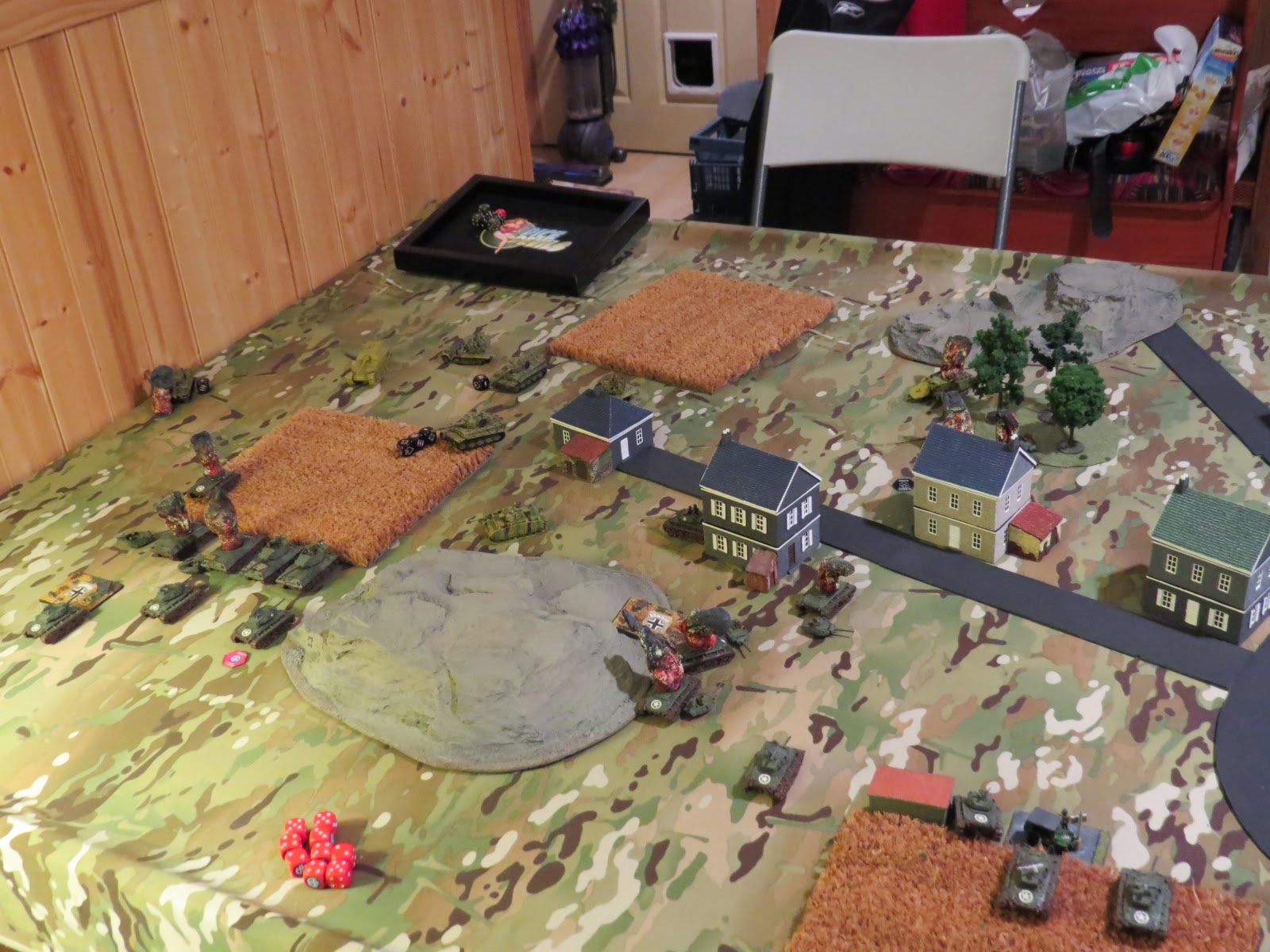 We're into turn four and tanks are dropping like crazy. This list is great on the move, but trying to hold off the bad guys before I can start pulling objectives is tough! I definitely think staying in cover and smoking the enemy every turn is the way to go. I tried maneuvering a little bit to keep Andrew from thinking I was just going to sit around for two hours and lose. 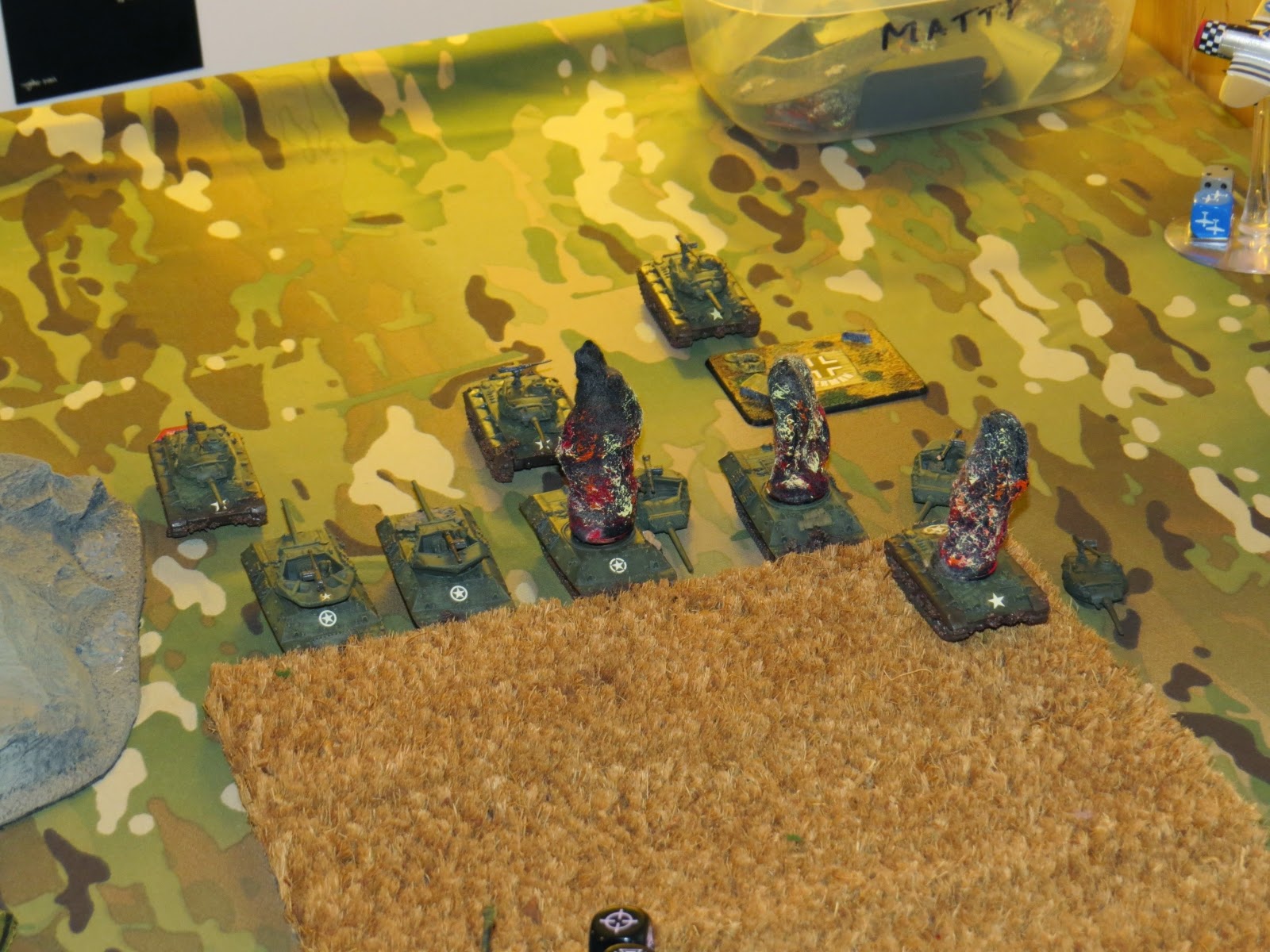 The turrets on the M10's are turned to the rear, they were bailed out. So along with the other two on fire, the crews were gone when they failed motivation. 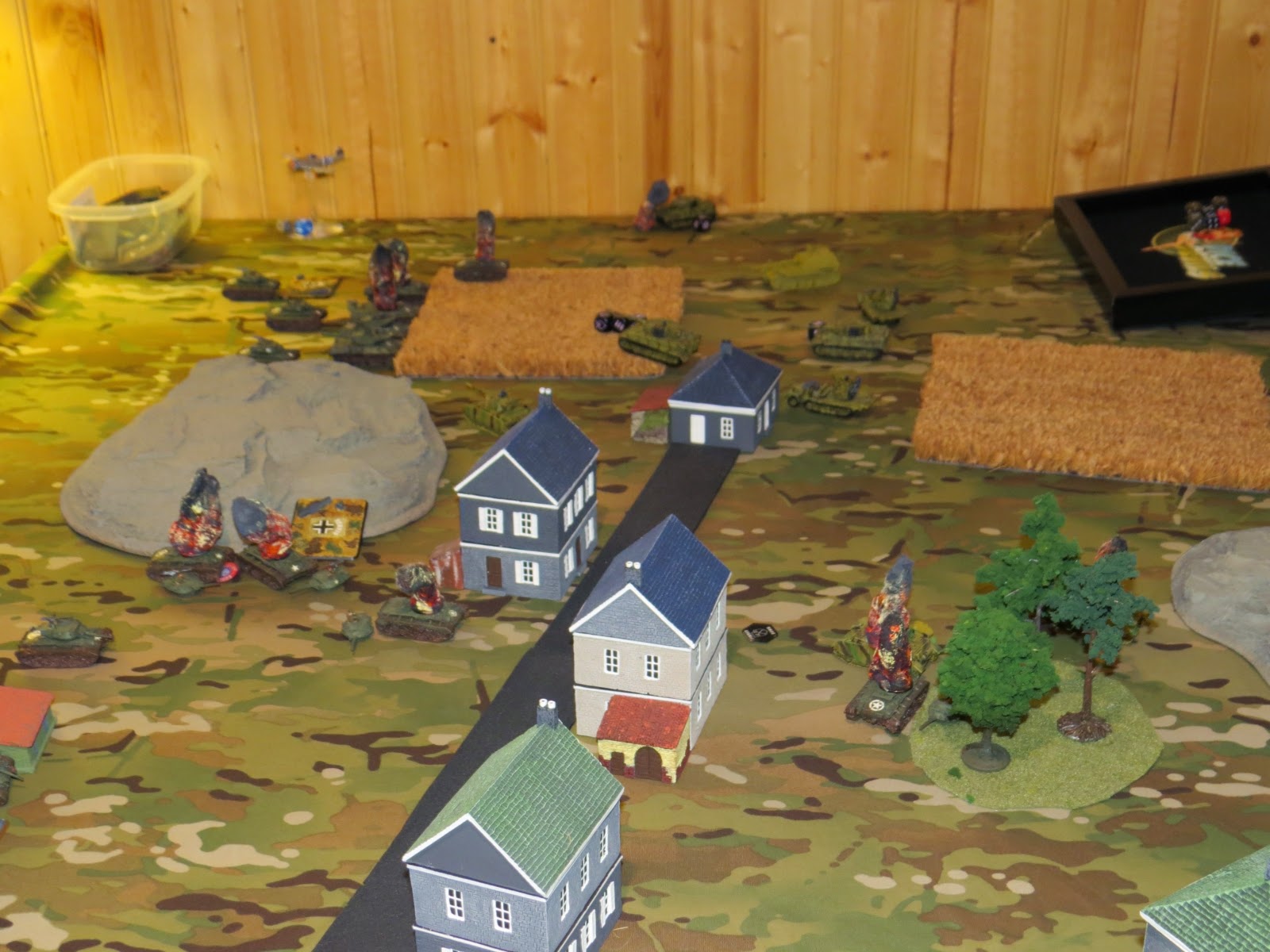 By the time I was able to get enough 'counters' to get to five platoons, it was too late. I ended up pulling one objective, and was left below half for platoons. Without a commander to take my test, I lose the game 2-5. I wouldn't change a lot about my list, I like to play the Chaffees whenever I can. It took a lot to paint them up a year ago and they're just plain fun to use them. 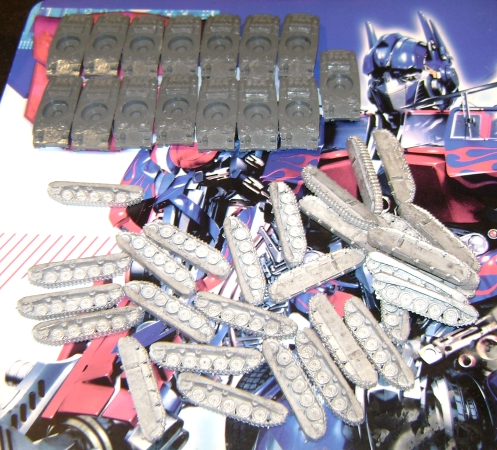 The Chaffee 'Sweat Shop' when I had them all cleaned up and ready to assemble. I don't think I will ever take on trying to complete FIFTEEN tanks of the same type again. At least not all at once, I was pretty happy with the end result. Now I am working on German Panthers, and some Pzr IV/70's. One thing is for certain in the next few weeks, you'll have a new podcast to listen to. 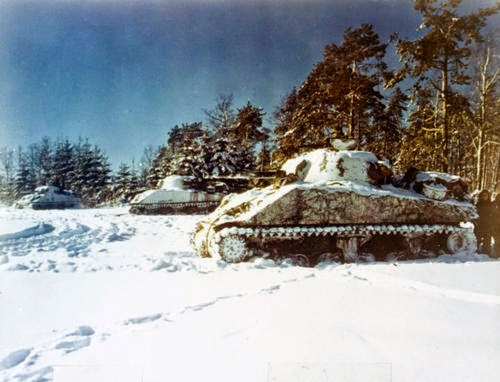