I have been hard at work trying to get at least one playable surface completed so I can start playing some games at my house. Up until a little while ago I had no terrain to speak of and was just starting to buy some buildings here and there. I ended up getting a few rocky hills for my birthday, along with desert palms. Looking around for trees I was able to get some bamboo lengths, tree-top pieces and some material for fields. The table is not yet complete however, there are a few things I will be completing on this project. The ends need to be put on, the fabric covering requires a trim in a few areas and I will likely replace the playing surface with a one piece top. Currently I have 3 separate pieces of 2'x4' sheets of thin board being supported underneath. Attaching legs is still a necessity as I would like to use this table without needing a 6' or other surface under it. IKEA has great options for legs, that's right I said IKEA. A poker table I had built a few years ago for a friend has round legs that are able to screw into retaining pieces that are firmly attached to the table bottom, this will allow for easy storage. 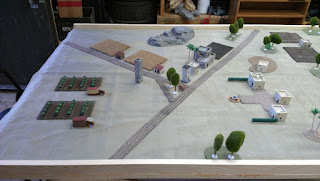 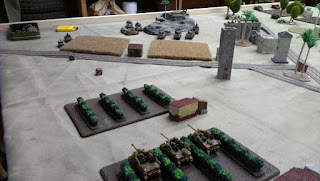 In an attempt to get some dice rolling and using this new surface I made a last minute phone call to Scotty to see if he would come over and have a game on a Tuesday night. Late War 1500 points, with my Panzergren list vs his US armor list, we had a great game and unfortunately I made a few bad rolls trying to secure one of the the two flanks I was protecting. My Marder III's had no effect and the 88's on the other half of the board were subjected to repeated attacks without being able to hit back. 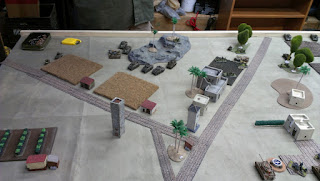 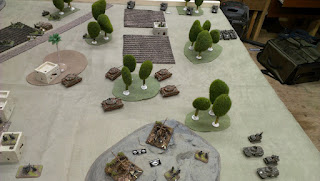 My table build will be in a another post shortly and some of the items and terrain I completed will be included. If you do not have any terrain to field at least one table, everything I did took very little money and not a lot of time to do.
By Matty at July 25, 2012