The poster reads 'The Only Easy Day Was Yesterday'. It pretty much sums up Act of Valor, the movie depicting a few days in the lives of a group of Navy SEALs. In between shopping for terrain and grabbing something to eat, my wife and I went to see it last night. Overall I enjoyed it quite a bit, I expected the acting in the film not to be too great or anything because the majority of the cast are SEALs in real life and their first job is to kick ass and kill bad guys. So with those expectations, I think I enjoyed it more than I thought I would. Go see it, I'd give it 3 out of 4.

On to my new project! So having spent some time playing a few games over the past few weeks I decided I would like to have a theme table. One of those tables where the terrain makes up a closer to real representation of a place in WW2 history. With some of the terrain I got for my birthday and shopping around online for buildings, I am going to make a very 'Italian' looking table in anticipation that eventually we will get some games in featuring some of the places that were a little difficult for armor to penetrate the city streets and alleys. 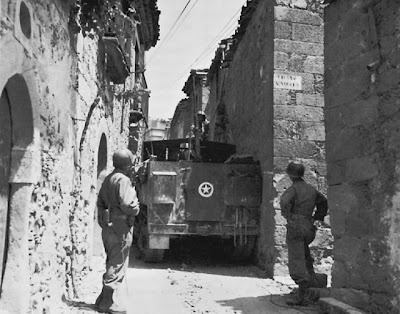 There are already a few desert buildings (mid east) out there and a mix of ones that are found in Italy during the period will make up the core of what I am trying to represent. At the moment I have 6-7 buildings on their way and should maybe pick up a few more or perhaps even throw down MattV's desert fort ruins to add some 'biblical' feel to the table top. With a few impassable mountain ranges or at the very least some 'slow going' terrain, this has the potential to be a very challenging layout.

I made my way across the 'border' to FdB in Gatineau on Saturday, Battle Brothers would be the store name I guess if it were translated. I thought the store had some nice, albeit few items for Flames. Cases and some well priced platoon and company sets make up most of the type of stuff they carry. I have been working over a LATE US list and was very tempted to pick up the Tank Destroyers they had in stock, with the 10% discount for the month of March on US items, they were tempting. They do order every MONDAY so if you want something specific they can get it in for you. I may try this once or twice to see what the service is like and will post my review once I get some more items. I left there with a US dice/token set, one of the large hills and the desert palm trees with bases. The prices were actually really good and better than average customer service will likely have me visiting the store again. Both places in Ottawa that carry Flames of War do seem to be quite a drive though unless you live right downtown.

I'll be making a call to The Comic Book Shoppe to see if they can bolster their Flames of War section. They have books and a few packs of Russian troops, but again a small selection in an otherwise HUGE store. Being there are more players from the Ottawa area into FoW, you would think a better selection would be available and I would not be relegated to online shopping all the time, I'm a want it now, get it now type of person and expect better pickings I guess than most other players who have already amassed their armies.
I'll be letting others know that if you visit their page and start requesting them to keep some stuff in stock, especially if they get their hands on some V3 rulebooks, new templates and the newer releases that are about to hit the market, I'm sure they would start bringing stuff in. Contact Comic Book Shoppe