Feast your eyes upon this board : 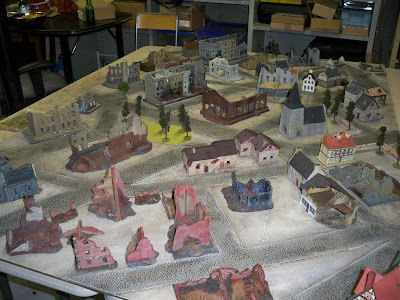 This marks the christening of Bretislava. Lothlann and Pripyat played breakthrough on this marvelous board this week as part of our Tier 3 Escalation league. I (CA$H) was on hand as War Correspondent and recoded all the action.


Here are the lists that were brought : 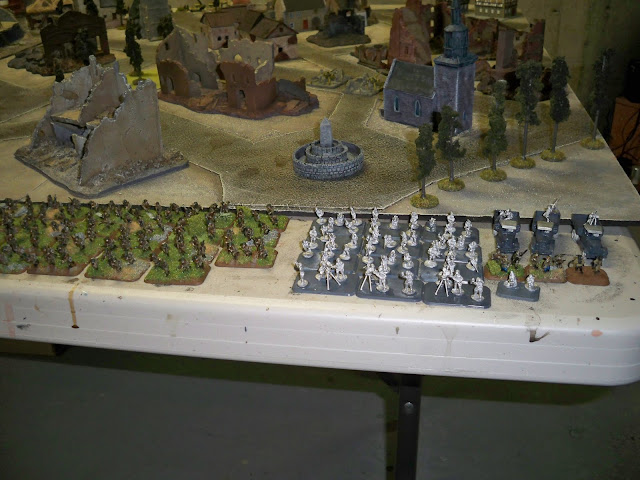 Army starts on one side of the board..... 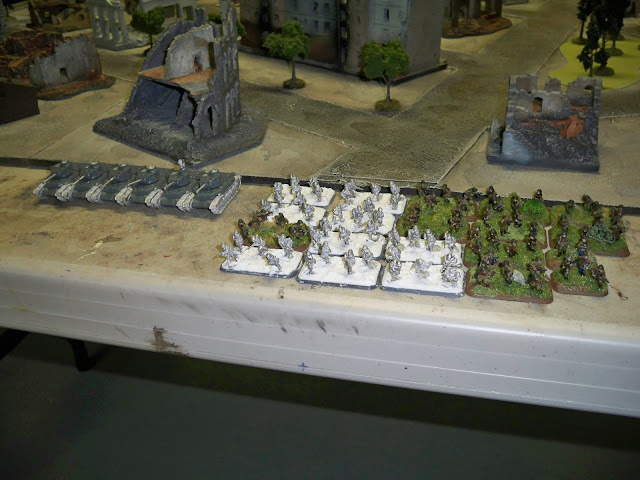 and it continues, see the new Matildas ? 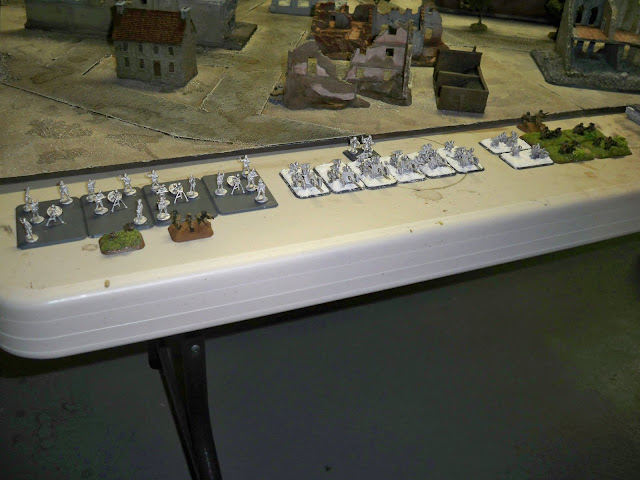 And it end at the other edge, with his mortars and AT guns
Pripyat's Fallschirmpionierkompanie 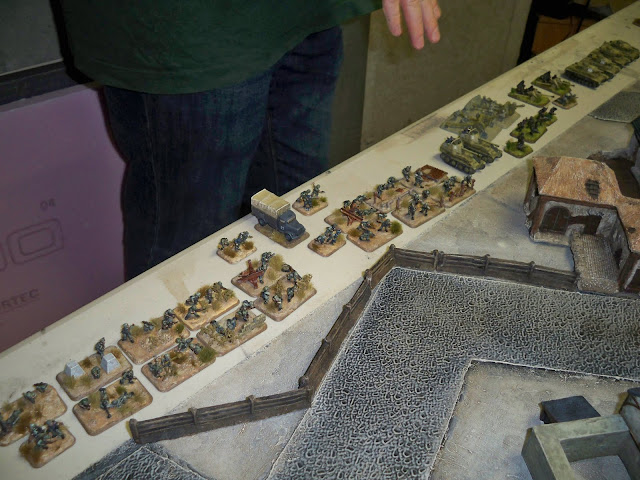 Overview, wow is he outnumbered... 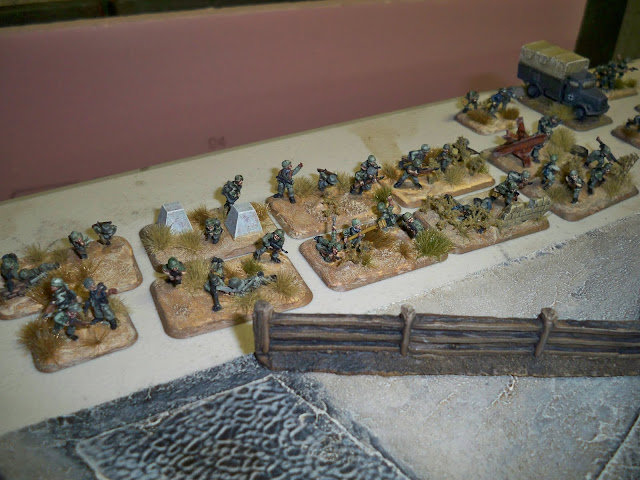 Closeup of a platoon, check out the pioneer basing 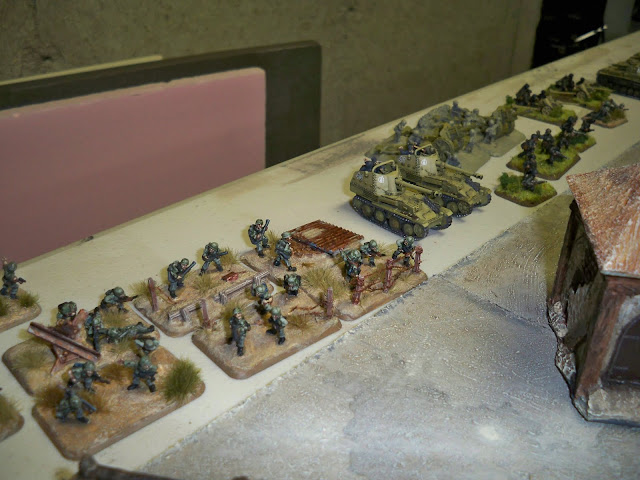 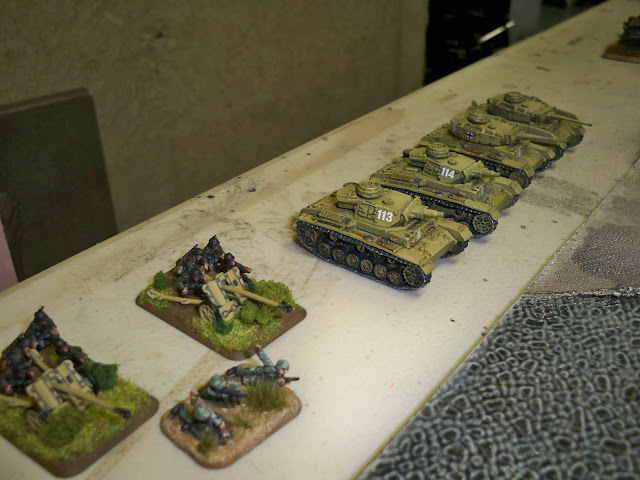 
Lothlann deploys his massive company in his quarter - look at all those teams! 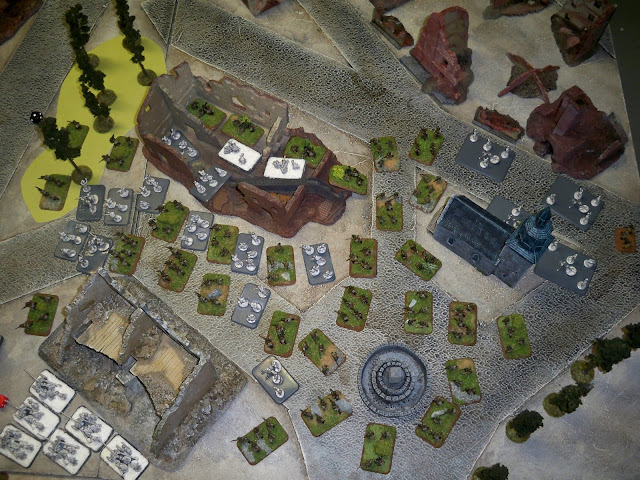 Pripyat's 10.5s in one corner with a platoon in support: 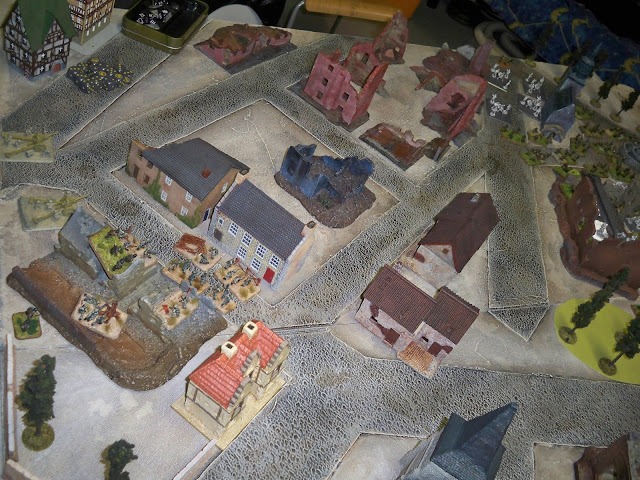 An in the other corner, another platoon and 10.5 observer: 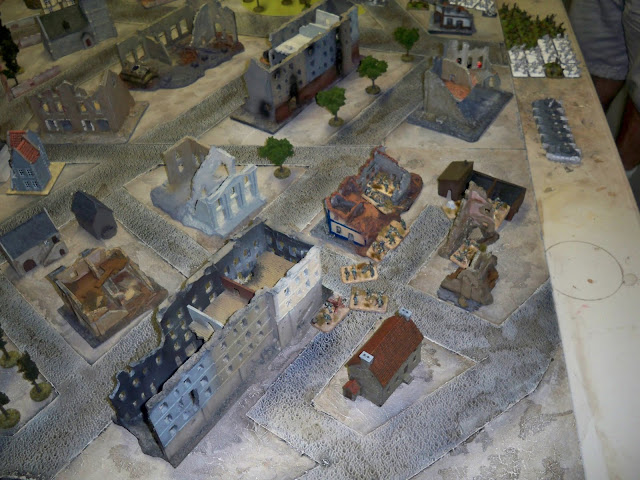 Now the Soviets start advancing towards the center 2 objectives..... 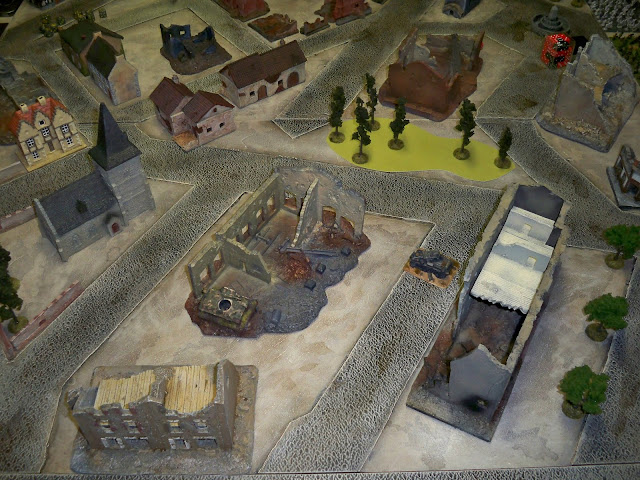 Note the objectives in the center, a pair of burned out tanks 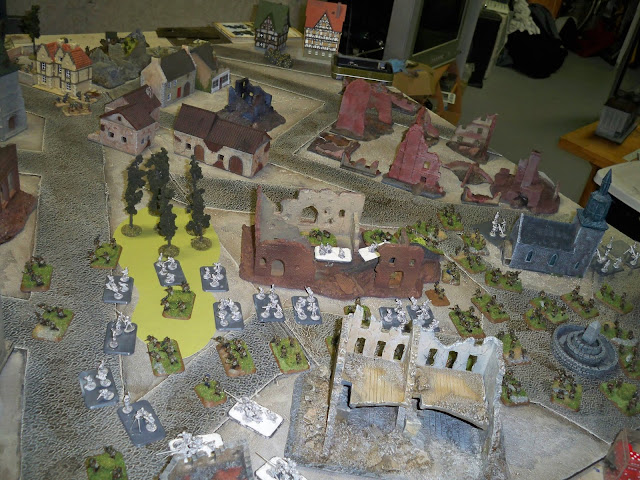 Soviets advancing, the objective just off screen on the left.
Pripyat spent a couple turns trying to soften up the advancing horde with Artillery, but with only 2 10.5 guns, he was re-rolling his successful hits, leading to minimal damage being done. He also failed to get any reserves! However, come turn 3, the Soviets situation improved immensely...
Turn 3 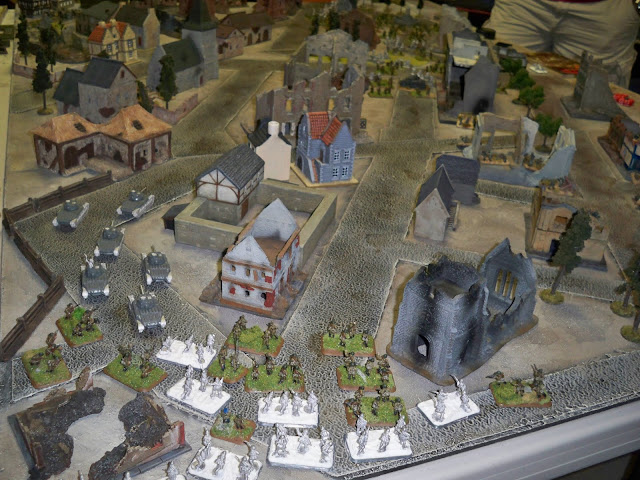 Soviet reinforcements arrive on Pripyats right flank, consisting of Matildas and a company of infantry.
At this point, the Soviet infantry horde has reached the center of the table and are securing the objectives: 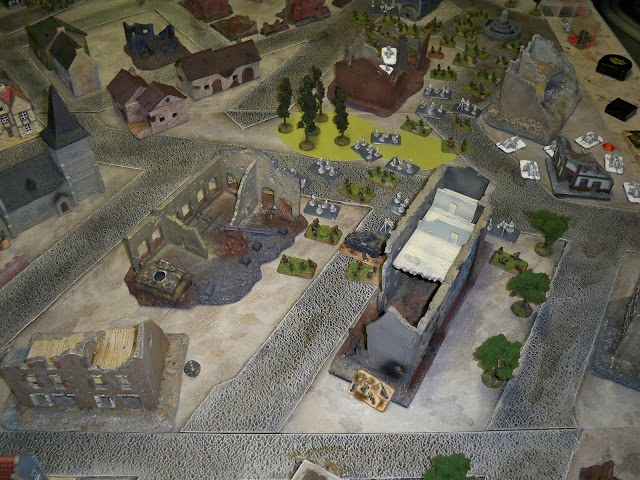 Things are now looking dire for the Germans, as they have yet to even get any reserves on the board!
Turn 4
Finally German support arrives!
Marders on the far side: 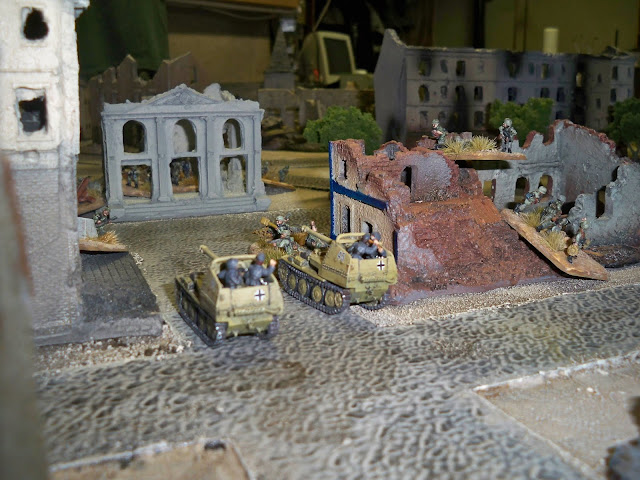 Panzers arrive near the 10.5s: 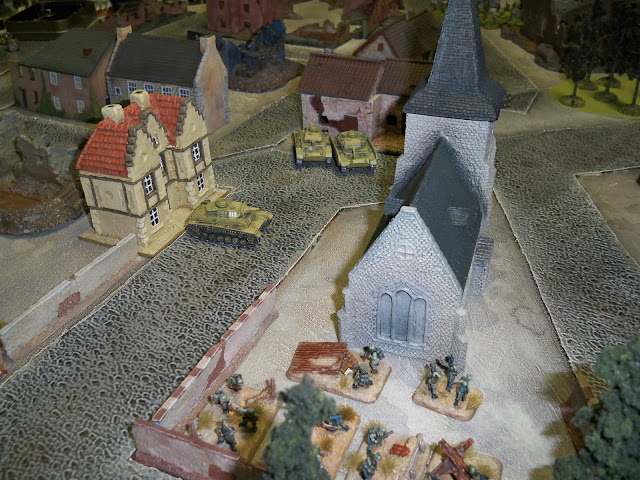 So far, all the fire back and forth has been far from decisive. A couple teams here and there, but nothing of real note. Things were about to change.... 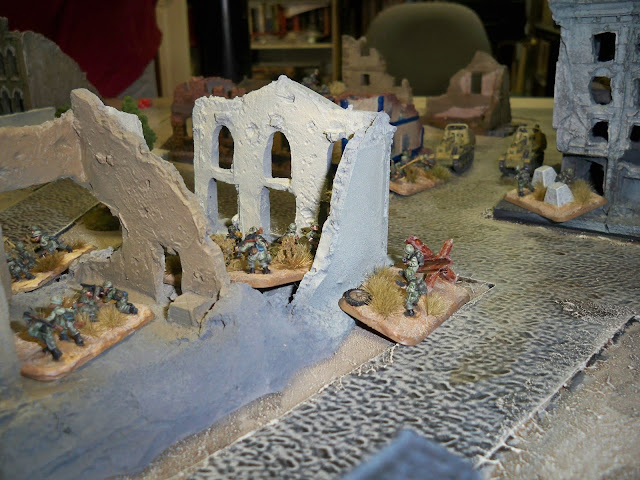 Germans advancing towards the center 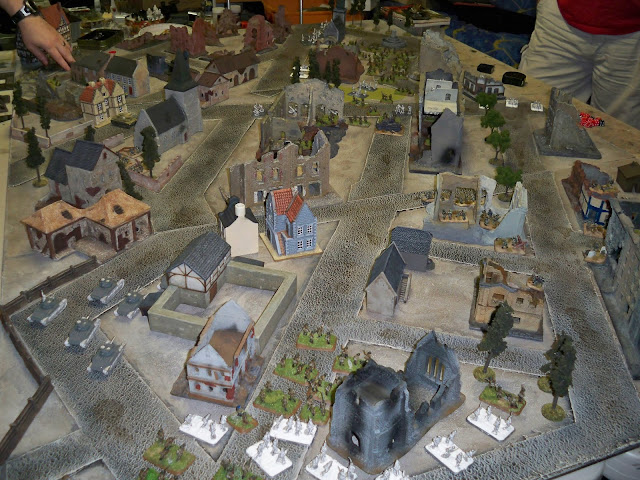 Overview at the bottom of Turn 4. Note the German platoon center right that is about to be sandwiched as it pushes towards the center. Losses on both sides at this point were minimal, mostly jockeying for position has taken place.
Turn 5
This was the turn the Germans made their move for the center. It starts with the Panzers
Now the German Panzers bring their machine guns to bear against the horde on the objectives. The easiest way to sum this up is with a Before and After.
Before: 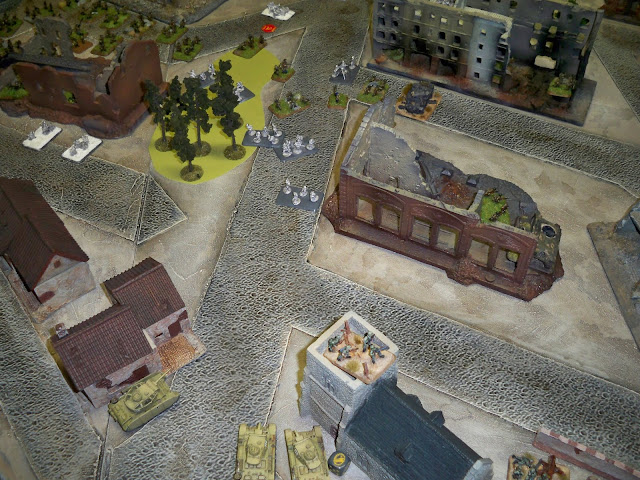 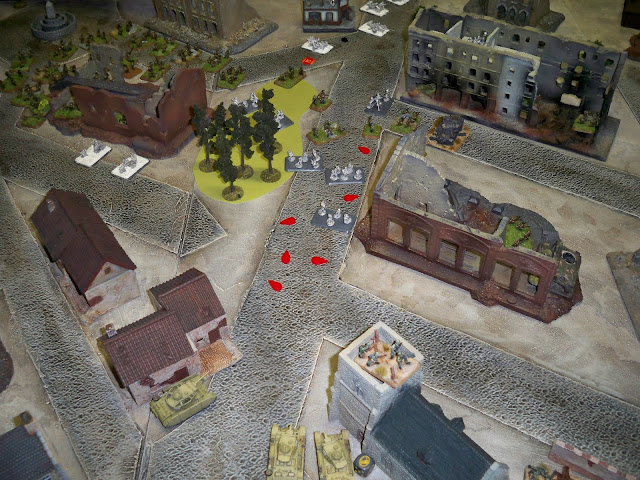 Followed by both German infantry platoons advancing, one unit decides to assault the Matildas: 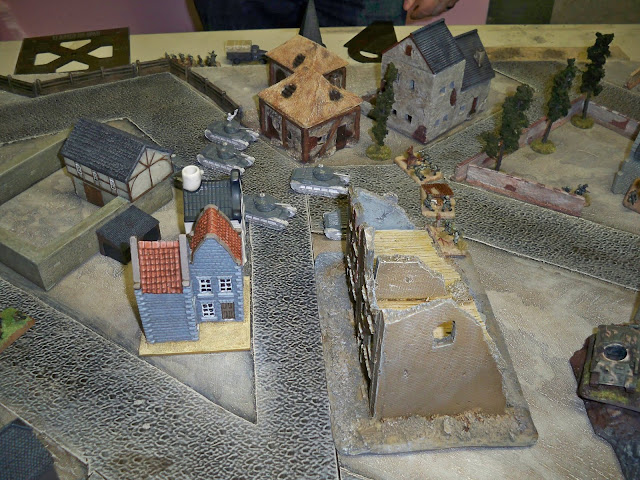 The assault does not go to plan, with the flame thrower destroying one tank, but the infantry get wiped out in return: 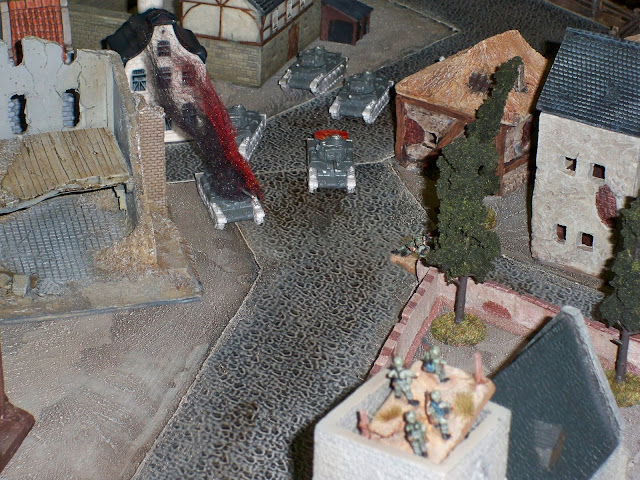 The center platoon assaults the Soviets in the housing block, and secures a toe hold in the ruins. 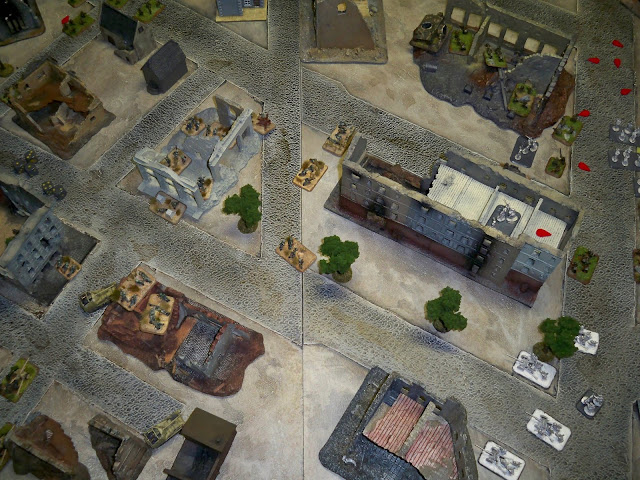 The Germans are actually starting to threaten the objective.
Can the wounded German platoon hold the ruins in the center? 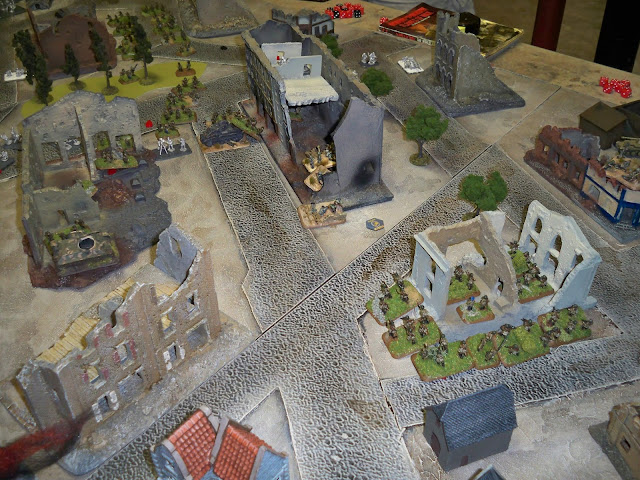 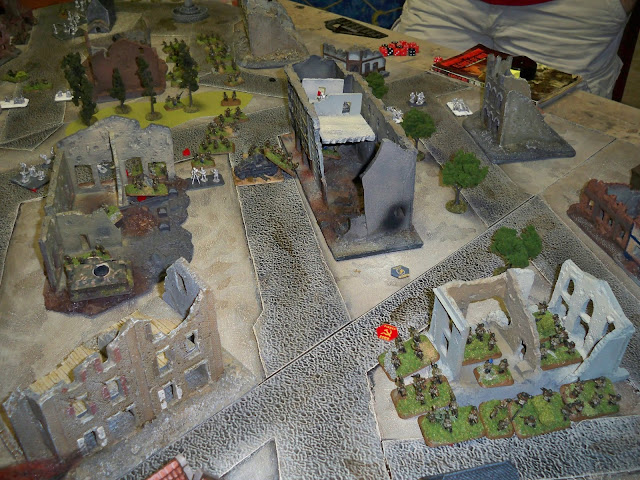 Things are looking good for the Soviets to hold the center and keep the Germans more than 16" away from the objectives.
However................. 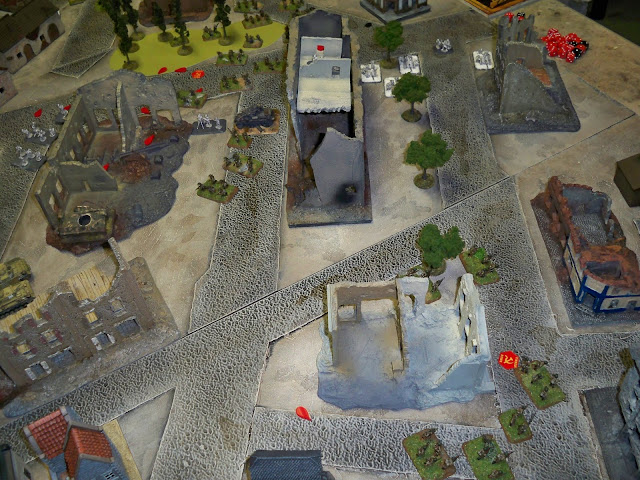 See the sneaky Panzers on the left side of the pic?
The Soviets assault (bottom of turn 5) the Panzers near the burned out T-34 objective, but are pinned by defensive fire!! 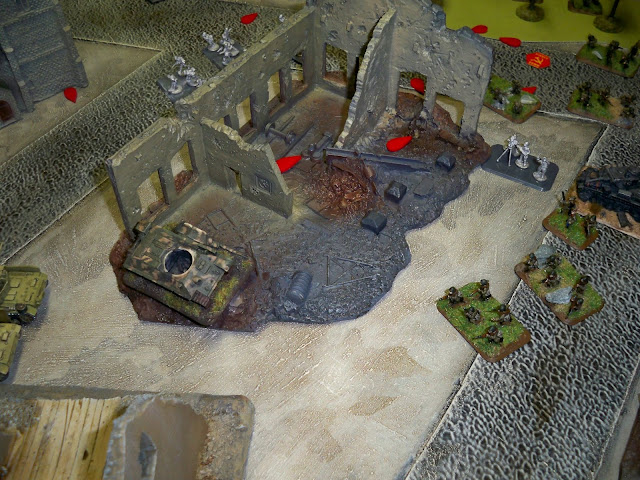 And at the top of Turn 6, when the objectives go live, the Panzers are withing 4" and the Soviet infantry that tried to assault the Panzers is not!! 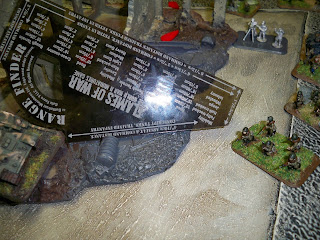 To be honest, no one saw this one coming, it wasn't part of either commanders plan. At the top of Turn 6, I came in to take a pic and asked off hand (for the purposes of the AAR) "Are these teams holding this objective?" at which point we measured and found they were 1/8" off !! To say Lothlann was shocked was is an understatement! Both commanders could only laugh at how the Germans pulled off a sneaky win by a fluke of positioning. It really does drive home the point of always know where your teams are in relation to the objectives, regardless of which turn it is.
I will leave it to Pripyat and Lothlann to chime in with comments, but overall it was an interesting tactical game of movement and timing, with a Soviet victory all but inevitable by the end of turn 5, save for the fluke of positioning of one team of Soviet infantry!
Lessons learned.
CA$H out.
By CA$H at May 29, 2011