Flames of War keeps burning strong with me, I can't stop thinking/painting/planing!! I just finished my small platoon of StuG III G: 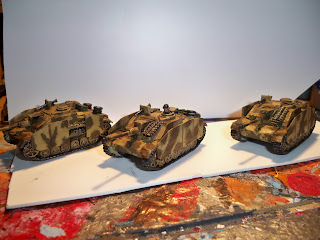 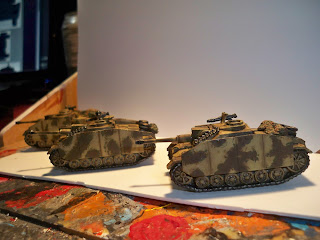 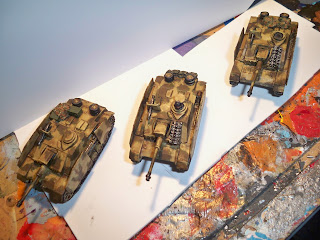 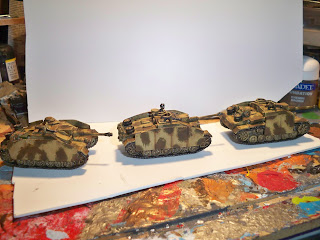 I modeled the paint scheme after some examples I found of ambushing StuGs at Kursk in 1943. They were a blast to paint, and I think will look awesome on the table. I would love any feedback or comments on how I can improve. I plan to paint my 1iC and 2iC Panzer IV Hs and they will have a slightly different scheme.

Once those HQ panzers are complete, I will have 1500 points painted and ready for Game Summit. I will them be focusing on some terrain, roads, etc for our tables.

Before I forget, here are some pics of a small 1000 point game Lothlann and I played last Saturday, testing out some units. We learned a lot about the rules, and just played to roll some dice and get more familiar with the rules. We fought over a small town consisting of some dollar store houses Joyous_Oblivion picked up, that we play to strip and paint up for an Eastern Front table. The roads are bare black at the present, but will be painted and I have over 40' of them to play with! Watch this space for more!

Here are the pics: 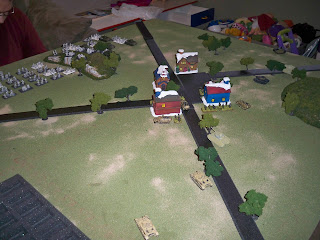 Turn 1 - The Russians advance on the town, T-34 tanks moving up his left flank, with anti-tank guns on the hill with awesome fields of fire. 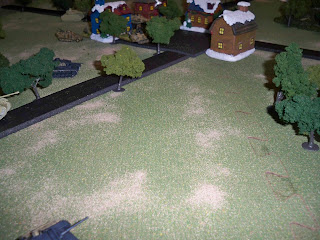 My Panzers sneak up the road, using trees to screen their movements as best they can. 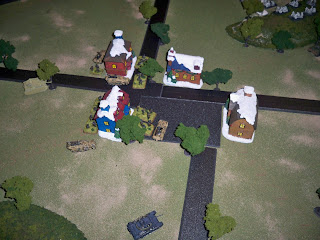 My PanzerGrendediers disembark into the town, taking the left two buildings. We now wait for the oncoming Reds! 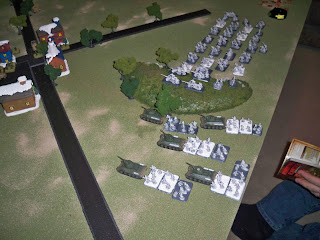 Turn 2 view from the Russian side. Lothlann decided to try the tank mounted infantry. 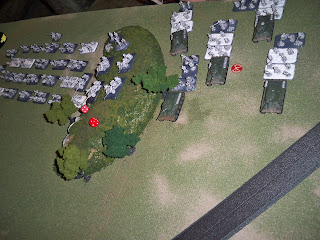 He quickly learned that infantry mounted on tanks...... 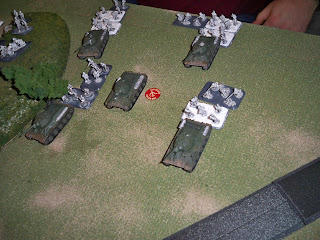 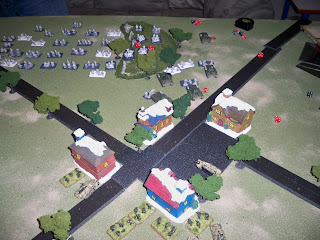 T-34s advance on the village, popping a half-track with ease......the rest hide behind the houses. 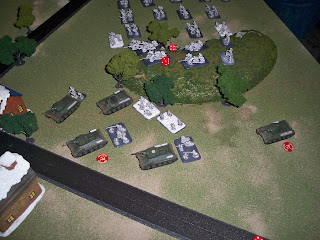 I keep pouring fire into the T-34s, destroying the platoon leader and bailing two more. Notice the severe lack of infantry riding on them now. 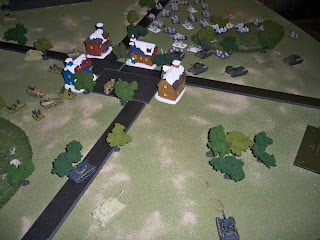 We called the game at turn 4, once the T-34s were broken and beaten. I called it a tie as Lothlann did manage to get a unit into the town (notice them behind the central church).
It was fun, and like I said, we got to try some interesting units and tactics - can't wait to play again ASAP!
CA$H out.
By CA$H at December 13, 2010