Last weekend I attended Cold Wars down in Pennsylvania along with Matt Varnish and PhantomRescue. We played different games, shopped for deals and had a good time nerding out with all things table top for 3 days. I decided to take the plunge and picked up SAGA - a historical table top skirmish wargame set in Europe's Viking Age (i.e. 793 AD to 1066 AD).

Why? Many reasons it would turn out. But initially it was the figures I saw for sale by Footsore Miniatures ( https://footsoreminiatures.com/ ). I met the sculptor (Bill Thornhill) and we got to chatting. Some of his handy work: 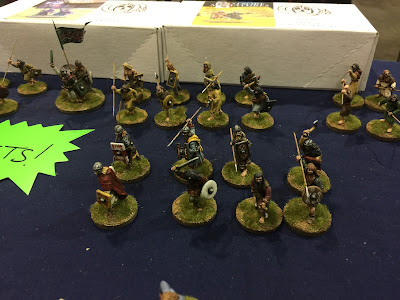 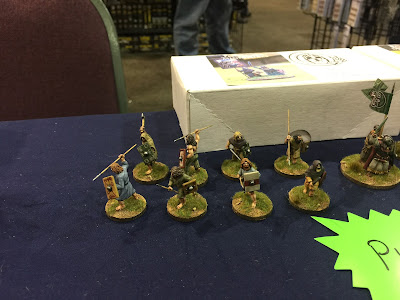 We got to talking and he mentioned how inspired he was sculpting for the game SAGA. Looking at his sculpts, and the huge selection of factions he made and was working on, it struck me that this game SAGA must have something to it - as he wasn't the only vendor selling or creating materials(terrain, models, accessories, etc) for SAGA.

Now, granted I had heard briefly about this game a year or so back when it was brought up as something some of the guys had flirted with starting. I hadn't thought much of it as I saw it as a fairly limited game (honestly I knew nothing about it) and it just wasn't what I thought I would be interested in. Bill talked about his history in gaming, starting back with Rogue Trader back in the day and we reminisced about all things gaming while talking about the show and my interest in possibly getting into SAGA. His models are beautiful...I wanted to buy some purely to just paint!

It helps that the main factions of SAGA piqued my life long interest in the Dark Ages and playing small scale skirmish games with warbands (here's to you Necromunda). It also helped that the models would perfectly fit into Frostgrave (another small skirmish game I snagged the rules for). So I figured - why not buy some and paint them up?

I continued to talk to Bill about the factions and models for SAGA, and I decided to go for Welsh to start, as he mentioned they were "Hit and Run" based and could use the models he sculpted above! I bought the rule book (Studio Tomahawk) from him, along with several blisters, enough for an 8 man warrior unit and 4 man Hearth-guard unit.

Knowing nothing of the game, its rules, mechanics or make up, Bill thoughtfully recommended I stick with foot troops with Welsh to start, as they have an armor penalty when mounted seeing as the crazy Welsh seldom wore shirts, let alone armor into battle. This recommendation came despite my attempts to buy more blisters of horsemen from him!

Matt Varnish ended up coming by, and was enamored by Bills sculpts also. He picked up some Scots, keen to start the game also! Phantom has since decided to start Crusaders, and we know Scotty has a boat load of warbands just waiting to be painted for SAGA also - he is my source of the Welsh starter box! I'm also hoping a few more of the DiceDevils crew will join us.

So I've been home a week now, and all I'm spending my free time reading about and watching on YouTube is SAGA. This weekend I assembled and painted the first 12 models I picked up from Footsore Miniatures - here is some of my progress: 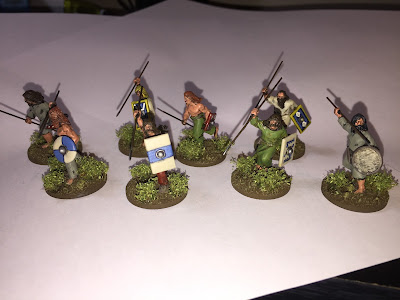 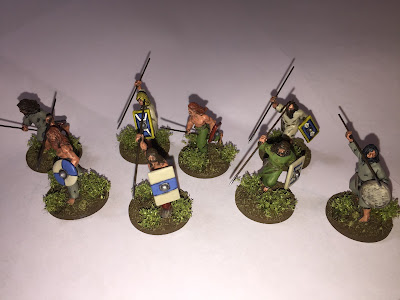 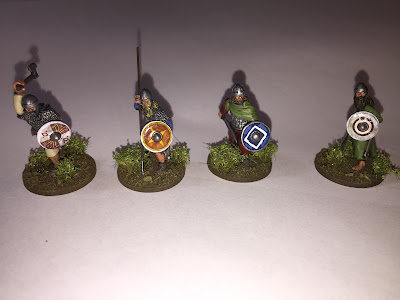 Hearth-guard with Javelins/Spears - you can tell they are wealthy since they have shoes!

Apologies for the crap lighting, but I wanted to get some pics asap for these guys. I really enjoyed working on them and can't wait to do some more. The nice thing about the game is the points system for Warbands: 1pt = 4x Hearth-guard / 8x Warriors / 12 Levy. It's really that simple! You take a  warlord and then choose what sort of force you want, usually starting at 4 points. So with the 8 Warriors and 4 Hearth-guard I have already painted, I'm already half way there! The Battle-board and faction order system is very unique and interesting, but I'll save the game mechanics and my thoughts on those for after I've played a game or two.

I'm really excited to start playing, and also to continue to paint for this system. I even picked up a load of terrain that will work well for all 28mm skirmish games, so more on that in another article. It seems that Team Yankee and 28mm (SAGA, Frostgrave, Warmachine and probably Bolt Action) will be my gaming activities this year, so I hope to contribute more content with my meager adventures in those systems. Thanks for reading!