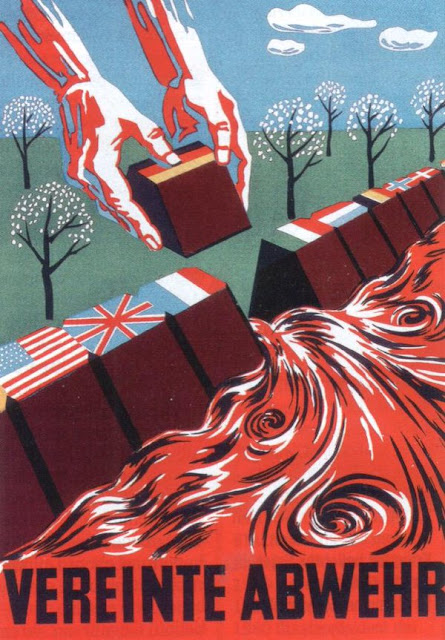 Germany is the missing link to stem the Red Tide?

Hey guys, got a Cold Wars 2017 game of Team Yankee with Tom Mullane (aka Capt Echo) his Germans vs my Russkies.   We played encounter after a grueling doubles Version 3 Flames tournament in which we came away in 2nd place with Dingos, Deacons, Bishops, and trucked infantry!

As ever, the video bat-rep is at the end. 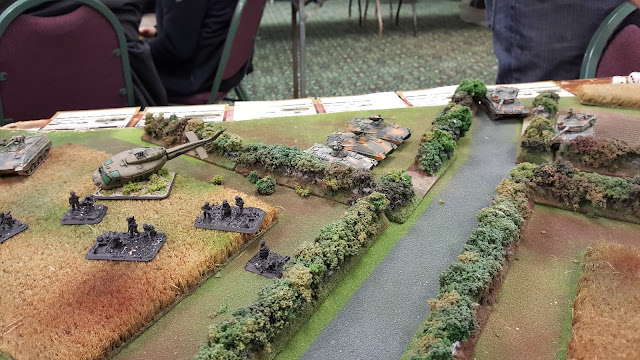 He had 2 formations, Gepards, Marders,Luchs and infantry in one, and Leo's and BO-105s in the other.   He deployed infantry on the left side objective (crashed Cdn Huey).. 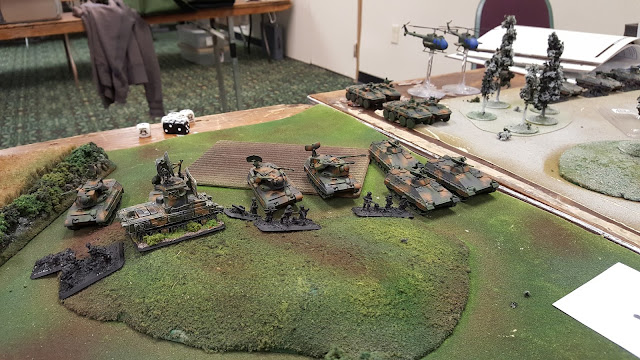 ..and more infantry and Gepards near the other objective (Air defence radar on hill) 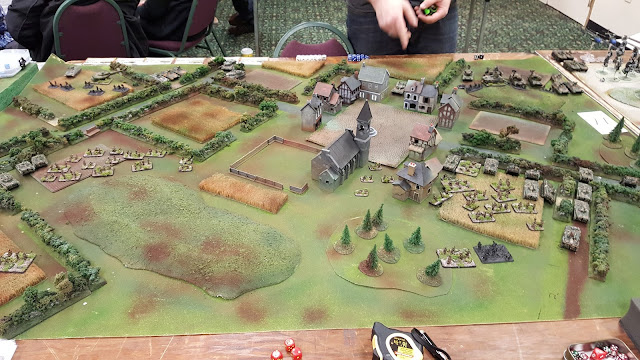 Hind's-Eye view after my turn 1 moves.  Motor Rifles and BMPs move out, using the hedges.   This is one of the I-95 tables that was used in the tournament. 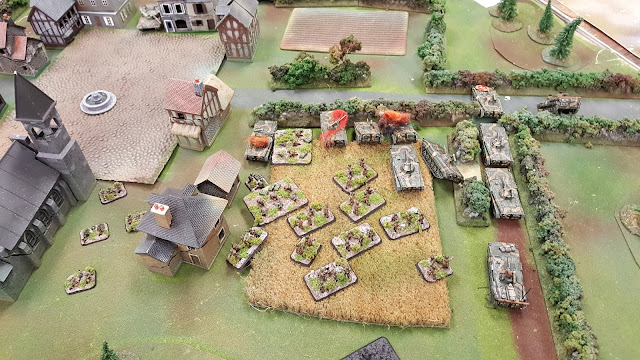 1 bailed and 3 knocked out?  I can live with that.  His Leo's are guarding the open square though, unafraid of my RPG teams (Chobham, more like Chumpham Armor) 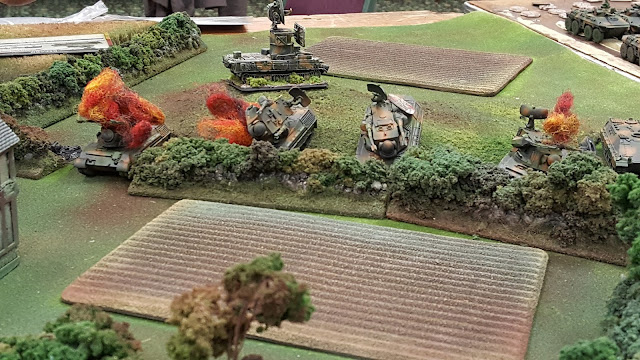 For those who don't already know, I HATE Gepards, and poured everything into them so they could burn.  I need to make the Ded Geppards logo into a shirt :) 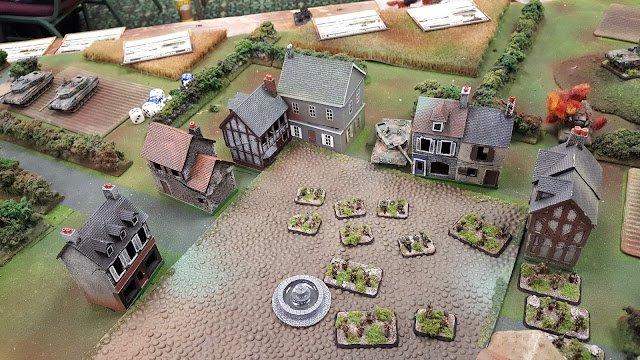 My plan initially was to use my infantry into the buildings and bypass the Leo tank HQ, but he swung in the Leo unit top left of screen, so I had to send the Motor Rifles towards the Grenadiers instead. 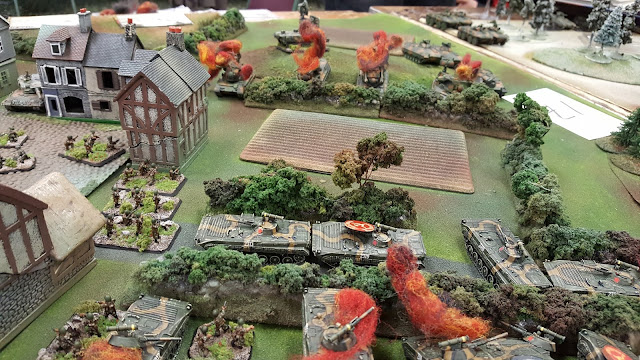 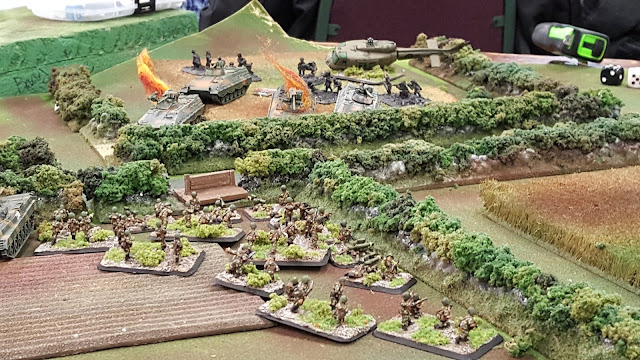 Meanwhile, on the left flank, my RPGs put in some work killing Marders in that enclosure, but his reserves will come and reinforce any turn now. 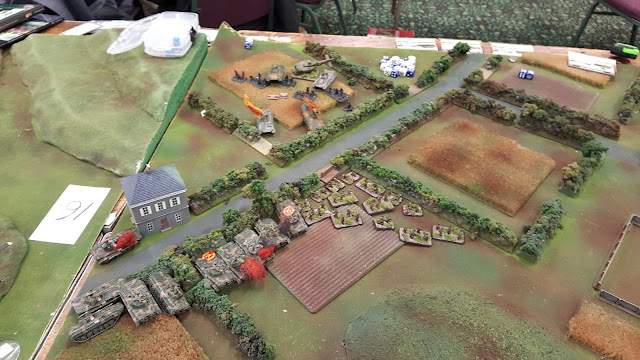 Hind's Eye view of left flank.. Leo's took out most of my BMPs then reinforced the town square.. 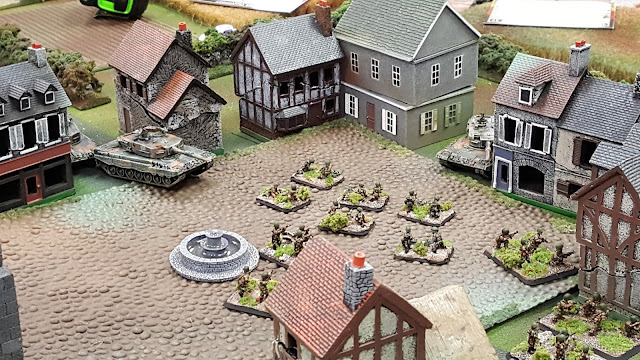 Thankfully, the Leo guns aren't Brutal, and most of my infantry survive. 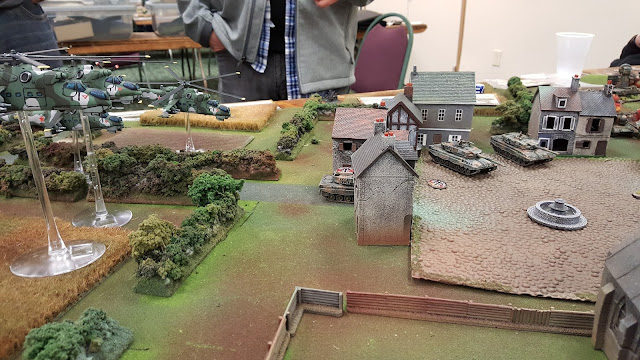 Hind's come in.. only after they were sure the Gep's were truly dead.   4 missile shots, one hit, one bail.  Still enough to force the Germans to say "Was ist los?" and flee the field in the face of helo's in their rear. 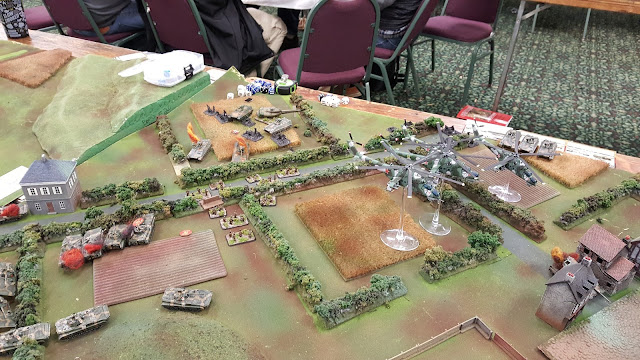 My infantry finally are on the left objective, but now Tom's reinforcements come in, Luchs to contest, and Marders to shoot down my Hinds (Anti-helicopter guns) while his BO-105 helos were waiting for my T-72s to fail more cross checks than you can imagine on the right flank! 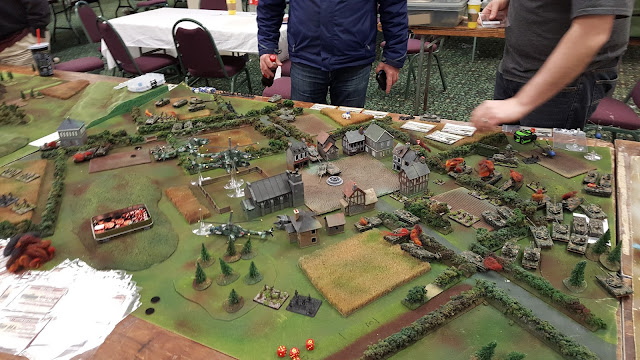 We would wind up calling the game here.. my attack fizzled out, even with my tanks on the right flank.. just couldn't shift his Grenadiers.  Lots of fun, and lots of burning vehicles, so good time had by all, but it was midnight, and I for one was bagged! 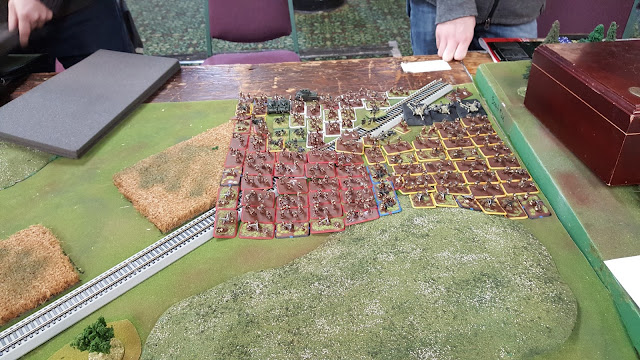 This shot is from our V3 Flames game.  Romanians LITERALLY filling their DZ to the point where they had to put a unit in reserve even though they were the attackers!   We would push back about 9 or so assaults (they do NOT get Quality of Quantity, otherwise they would have gotten us in turn 3)   Also, my Bishops probably killed about 20 stands over the course of the game!!


Here is the video below, hope you enjoy: