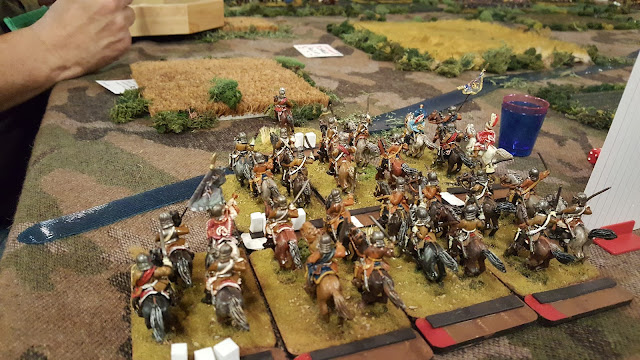 One thing about the ECW, VERY colourful armies and flags!   I am commanding Lord Henry Wilmont, the Earl of Rochester, while Tristan was commanding Sir James Ramsay.  We both had cavalry forces, and would be on opposite flanks. 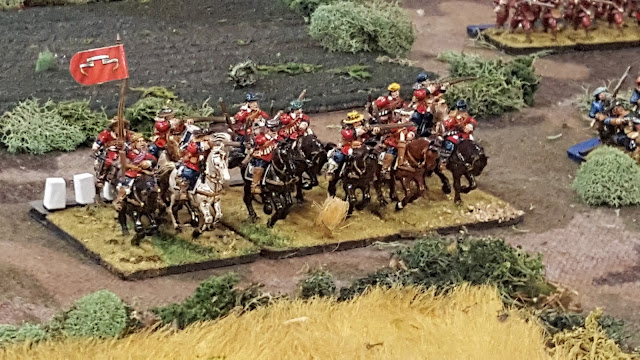 Closeup of Lord Feilding's (apparently the correct spelling) cavalry units with 'Caracole' rule:  Ride up close, fire both pistols, return back to reload, all in the shooting step, but you need to roll enough movement to do it or be caught off guard. 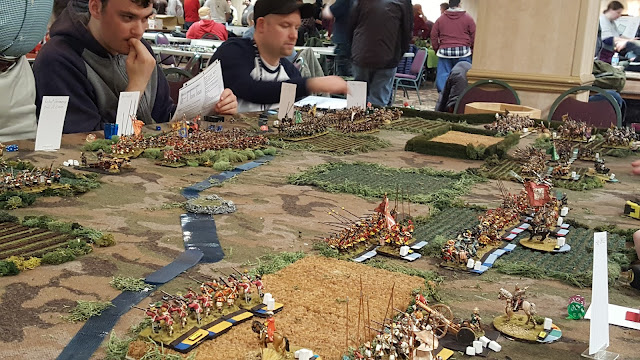 Opposite Diagonal from my position is Tristan on the Parliament side. Each player had about 3 units and a commander, so it was fast paced despite what looks to be a sea of splendidly painted models not moving! 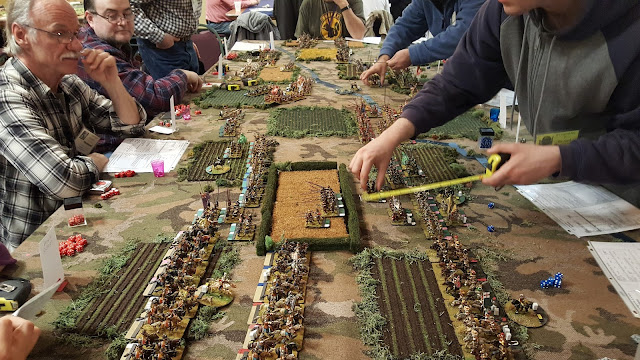 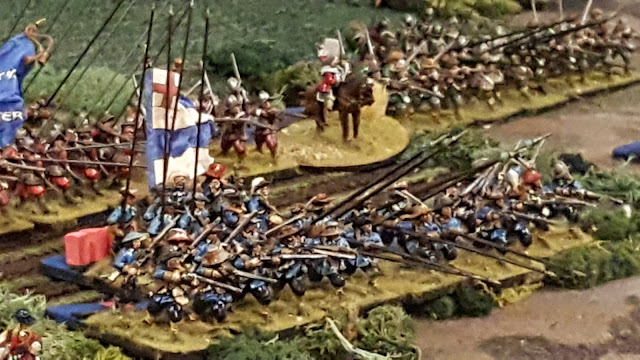 Center pike unit near the Earl of Essex, advancing to take ground.  My scots will look similar, but with blue bonnets and grey-brown coats, not the other way around! 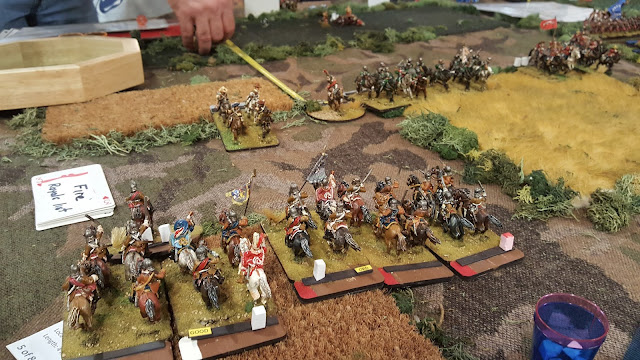 I am already losing command pips (white) and would soon collect many wound pips (red). The pips are little foam cubes that are magentized on the thin strip on the back of each base.   The shot glass is where used command pips go and can only be replenished in the Rally or end of turn phase. 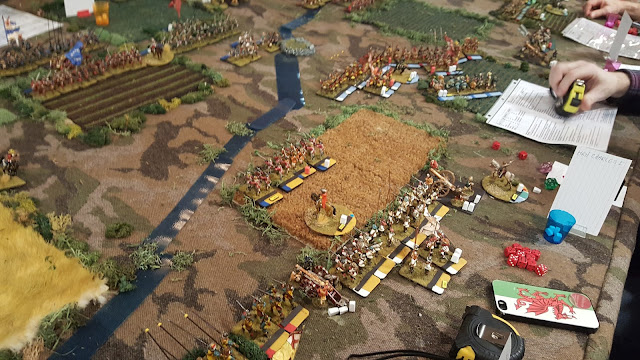 Royalist center units move up to the creek (only a few inch loss of movement when crossing it, was not a big barrier)  You can see my partner Phil's cellphone.  He suffered a crushing morale loss as during our game, France defeated Wales in Rugby.  I chose not to tell him I played French for Napoleonics :) 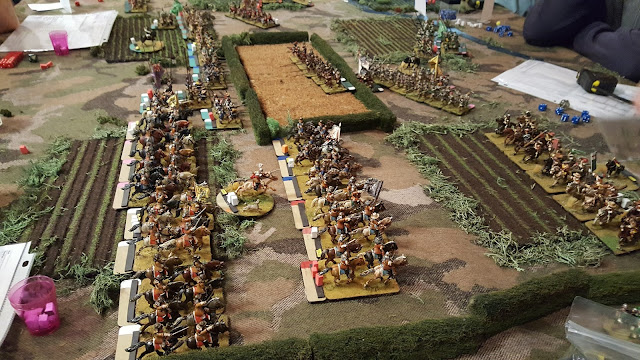 Tristan's Cav were 'elite', but were facing down three times their number in lesser-quality 'average' and 'poor' cavalry. 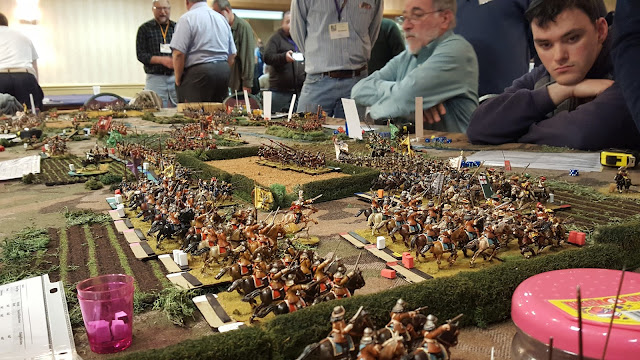 Still a lot to smash through though! 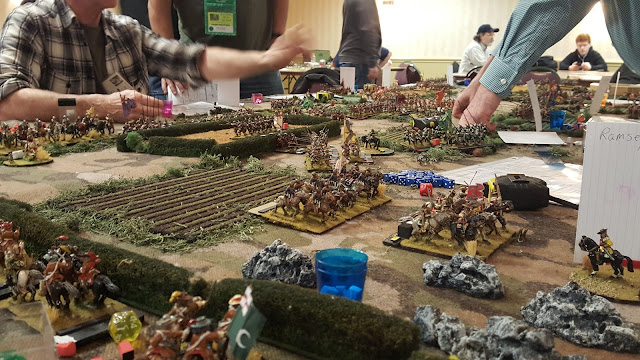 After routing some screens, the main Royalist Cavalry rout Tristan's Cavalry.   Sir James Ramsey is there to Rally them though.. if a rally card is pulled.... 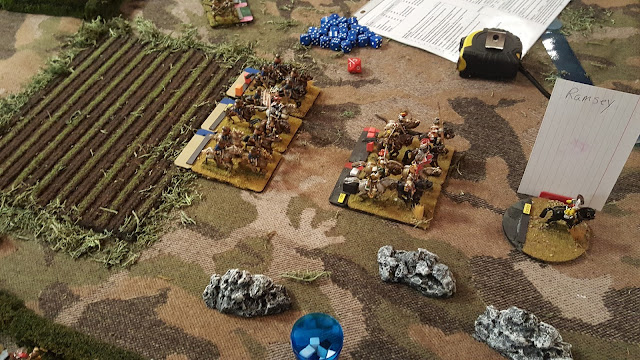 But unfortunately, a Royalist Charge card was next, meaning they got to charge first, routing Ramsey and his men off the board! 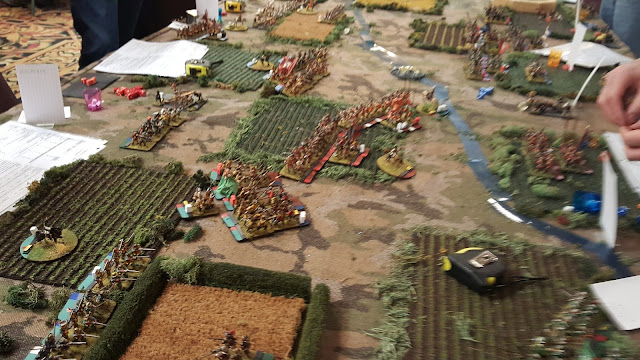 My troops suffered a similar fate.. I had set up a brilliant flanking gamble, and needed to charge first or be counter-flanked.  The Royalist Charge card allowed me to do just that, but then I botched the Charge order, leaving my men high and dry for the counter charge by the Cuirassiers and I was similarly routed!
As we were both finished, Tris and I set out to go heckle Matt, and thus this is the final battle shot, of the center units getting to grips with one another, Muskets and Pike clashing.
Great game, hope 'Pike & Shotte' (by Warlord Games) has a similar fast pace, but since it is based on Black Powder, I am sure it will be just fine.

As always, video below: