Welcome to the new year! Even though we are into another year of gaming, writing and painting, most of us were too busy to get together much over the holidays for any real games. Such is life and some things never change, but it didn't keep Andrew, Scotty (acting as spectator and umpire) and myself from getting a little game of Team Yankee in. Sticking around afterwards, we also have a new podcast recorded and should be posted in the next couple of days!! Very exciting news all 'round. 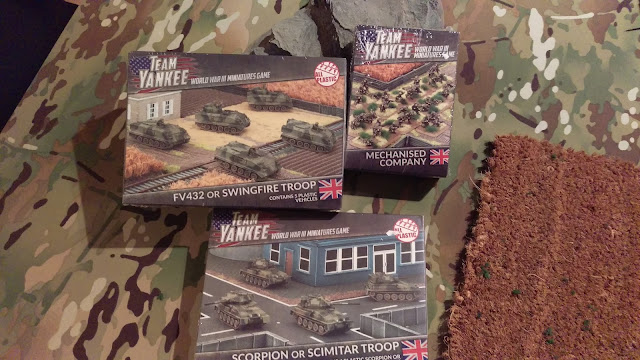 Still need to unbox this lot and start getting it together! I'm excited to add to my army and increase the number of flexible options for my British Army. I listed my points total below at the end of this article. Sorry I didn't include a breakdown of Andrew's forces. We both feel at the moment, somewhere in the 60-75 point range is going to be a lot more likely than 100 points. 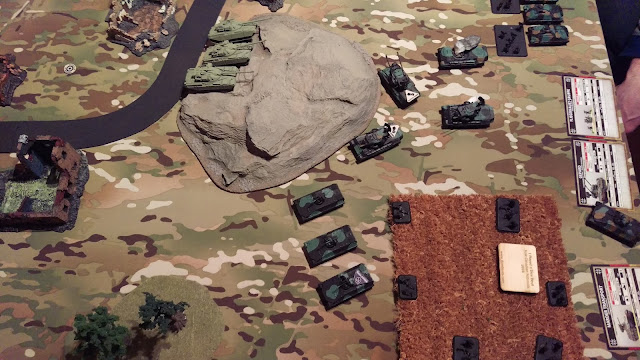 This was the bottom of Turn 1, I had the first turn and managed to get to some cover in the center of the table with one of my tank units. I managed to destroy a few of the AA teams before getting my Lynx and Harriers into the area for some strafing runs. We had rolled up Counterattack and it took the better part of three hours to play through it. Scotty was on-hand watching the game unfold and we had quite a few rules discussions, as Andrew and I both only have a handful of games under our belts thus far. 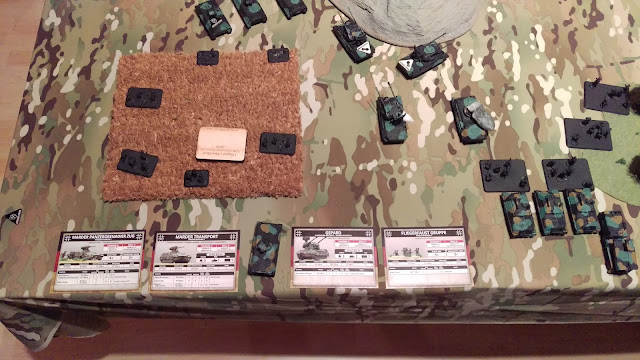 Here you can see the stat cards and forces on the table for Andrew, he had his infantry teams dug in and was well protected by light armored vehicles. Most of the shooting on his turn I suffered early casualties, including a flight of Lynx helos in the Anti-Aircraft phase of the shooting step. Andrew scored a few hits and a 5+ save proved too much and they were quickly dispatched off the table without firing a shot!! Points well spent on his part. 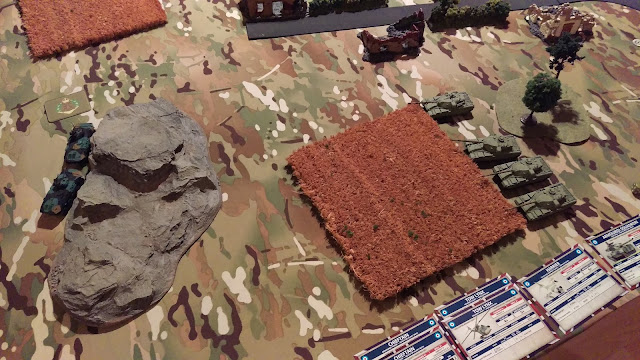 Turn 2, I focused my attention to the objective corner of the battlefield. Andrew's reserves would arrive 16" from the corner and I had to be in place to attempt to destroy anything coming onto the table from this point. The Leopard's are a formidable tank and are every bit as good as my Chieftain battle tanks. 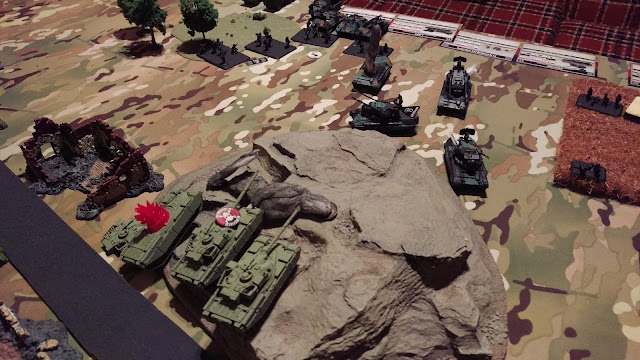 After losing a tank, Andrew laid down a barrage of Minelet ammunition from his artillery. This allows him to place a minefield token onto the field of play resulting in me being unable to move without running the risk of blowing the tracks off my vehicles, resulting in more losses to the British!
I think this new tactic of 'area denyability' is going to be a great game mechanic in future games. 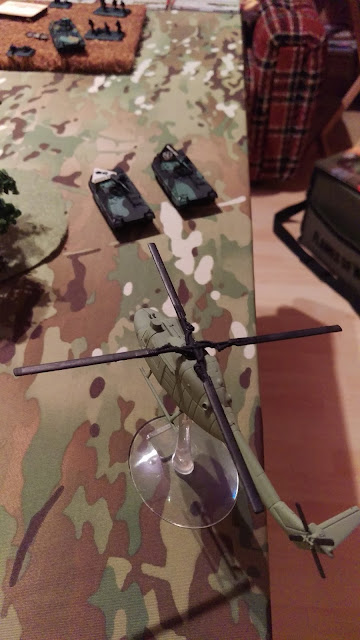 My last Lynx is about to get show down! 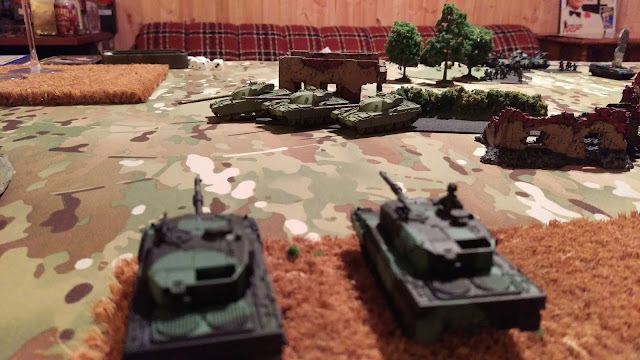 German Leopard tanks move onto the table and attempt to take out some Chieftain tanks of Her Majesty's Army!! Normally NATO allies, I feel there are going to be a lot of games that are considered Blue on Blue. I don't mind this aspect, as the focus on the Soviet Union would get tiresome and repetitive. 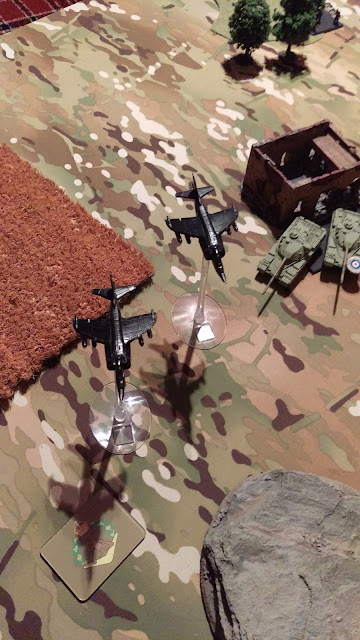 The only unit to survive this entire encounter, the Harrier jump jets of the Royal Air Force did a little bit of damage, I used them  a few times this games and decided to try both the "SALVO" bombing run and use the 30mm guns in order to inflict damage to Andrew's forces. I only got these built a day before and had some primer thrown on to at least make them game ready. They are far from complete and these kits were a joy to put together, they came with very few pieces and the resin casts are excellent. A bit pricey at $45 for the pair, they'll fair well and I am sure I will get my money out of them. 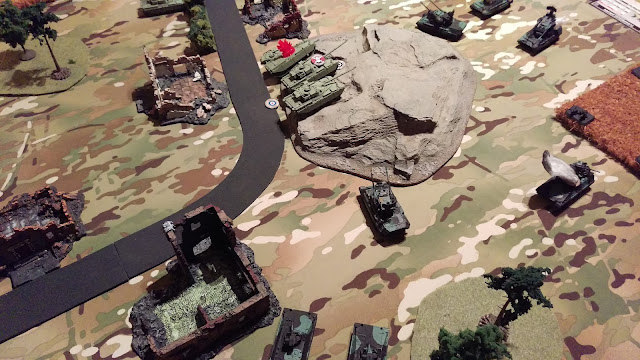 The closing part of our game. Without passing a test, I couldn't move from my spot on the hill through Andrew's well placed minefield. So he was able to fire a large amount of shots into the side armor of my Chieftain platoon. I lost another tank and subsequently failed the morale test. My second unit of tanks suffered the same fate and thus ended any chances of a comeback victory. 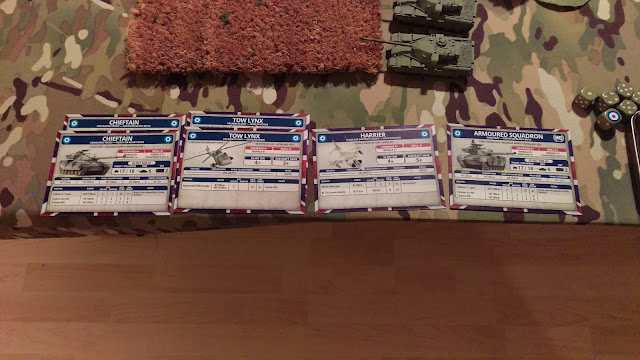 My feelings on this game so far has been neutral to positive, but after reading the rules a few more times and playing the game while moving through the books, it's starting to grow on me. I think some of the units and ranges of weapons systems are a little over the top. I totally understand they had to base their game system on the Flames of War rules, but somehow it loses a little bit of the 'shoot and scoot' aspect. There is barely anywhere to hide on the table, as most of the weapons in Team Yankee are well within range on a 6'x4' table.

I like the cards with the stats and the 'special' rules on the reverse side, the only thing I find though, is that it clutters up the table and I know it's only a minor thing, but it makes taking really nice pictures or video on the fly difficult. I'll be happy when Battlefront figures out what to do about this and their online Forces of War site, which allows you to print out your army lists for Flames of War. They have indicated they will move to include Team Yankee into the site, though they are unsure in what capacity. Eventually, I think having your army list on one page with all the necessary stat lines and information is doable. So I'm not sure what their reservation is about just putting it together like they do for Flames of War....though of course that will be changing too won't it?