Hey gang.   Scott and I did our first game of 2017:  Napoleonics, using Black Powder Rule set, 'Granja Abundancia' from the Albion Triumphant Peninsular War supplement, essentially, a take and hold field objectives. First time we have everything painted, 500pts a side, on a nice 12 foot by 8 foot table.  Below is the picture dump, the actual battle report is in the linked video: 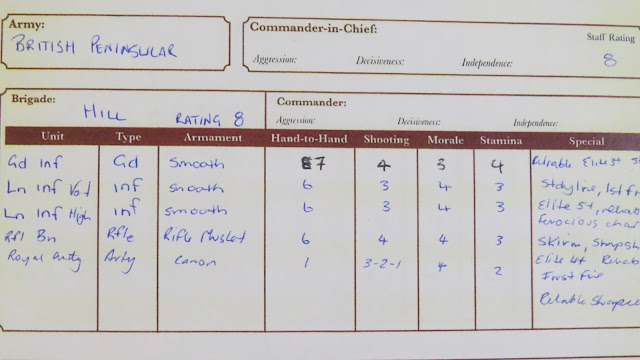 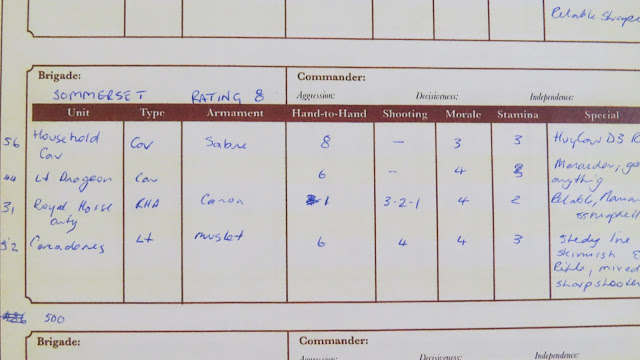 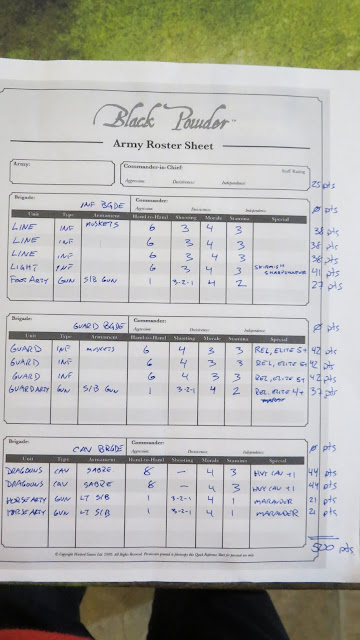 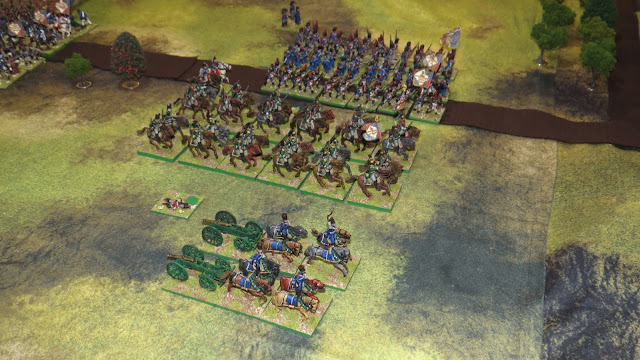 Scenario dictates everything comes on in March column.   Did not roll high enough command to reform the Cavalry Brigade nor the Guard. 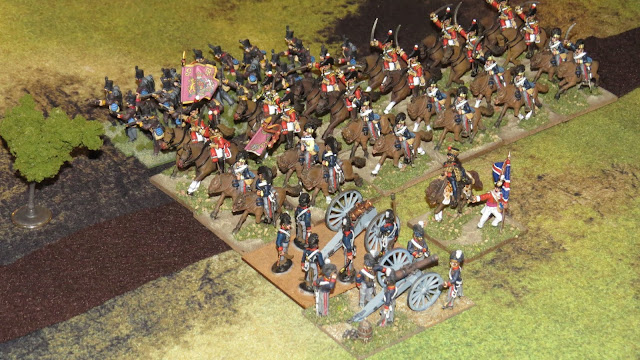 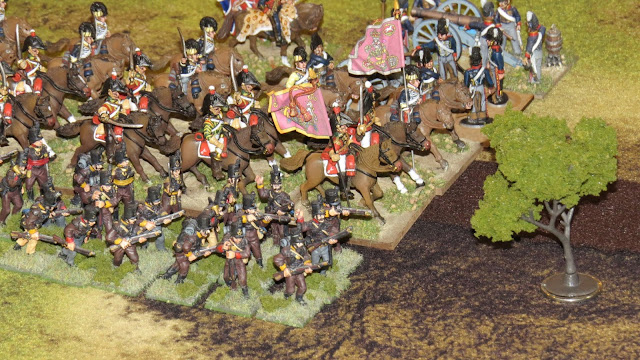 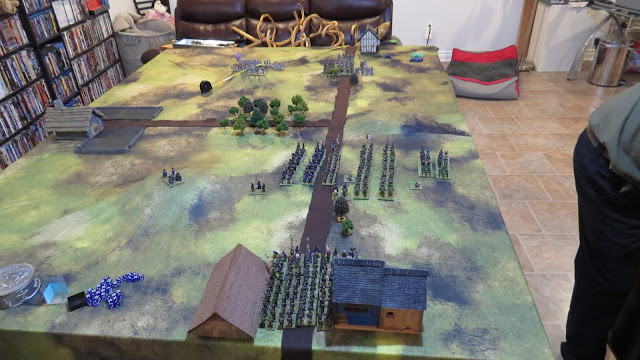 After turn one, everything is in March Column on both sides, French in foreground, British at the back coming towards me.   12 feet between reserve table edges! 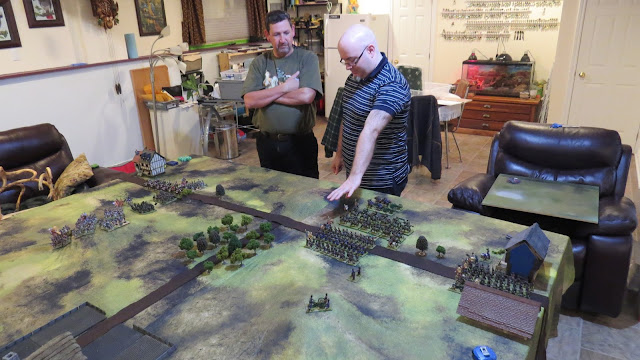 Thanks to PhantomRescue for taking pics, you can see me explaining in detail my upcoming (Failed) command orders for the Dragoon brigade! 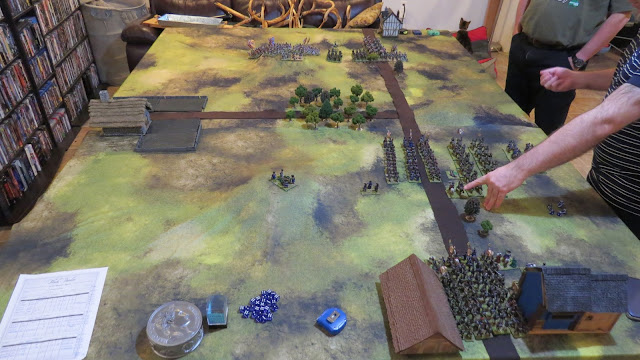 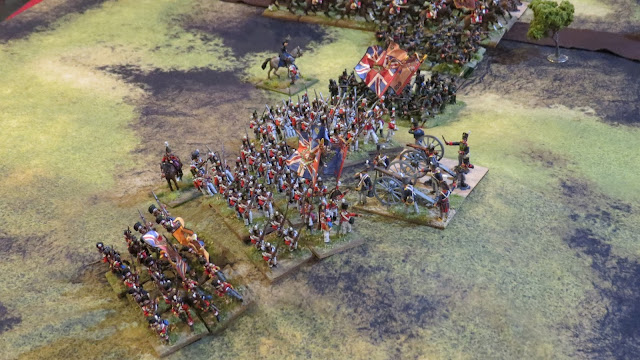 Scott at least is able to deploy into Attack Columns and gets his guns on the high ground. 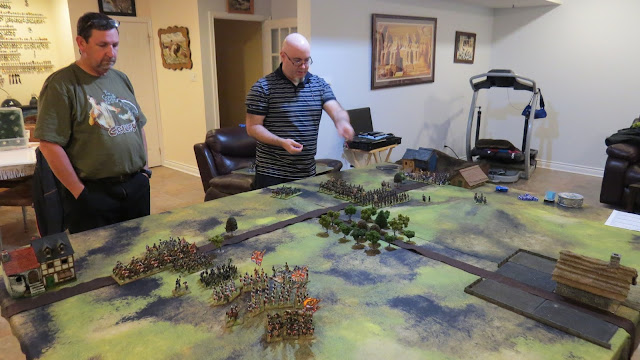 Only my Guards brigade gets any moves on turn 2... sad. 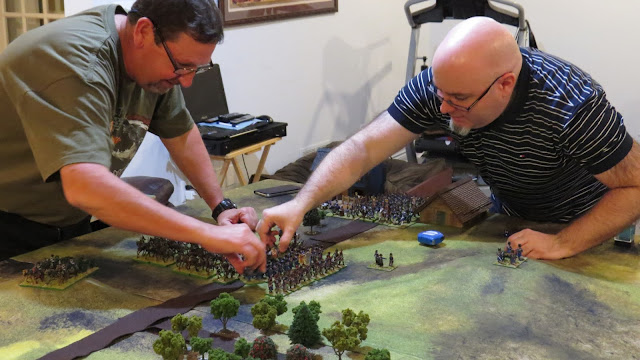 Scott helps me move my Guards... 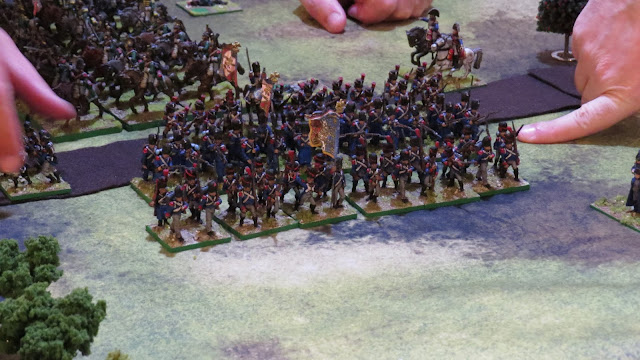 French Guards now in Line formation, ready to form up to stop the gap between the woods and the objective Orchard/Farm 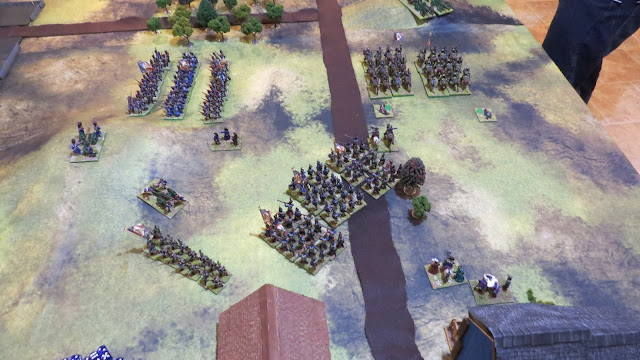 Top-down view of my forces, end of Turn 2, after Guards moving towards the left, Cav deployed into column, Horse Artillery on the hill. 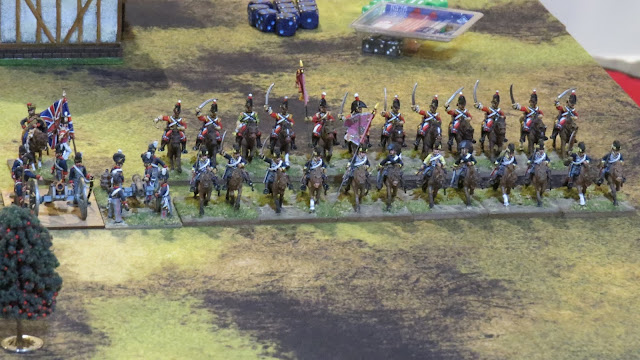 Scott unlimbers his RHA guns next to the Household Cavalry and Heavy Dragoons. 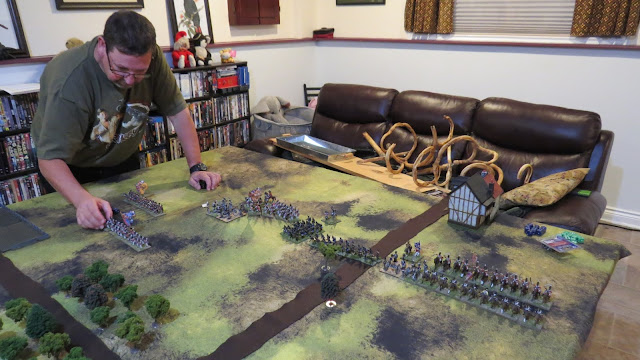 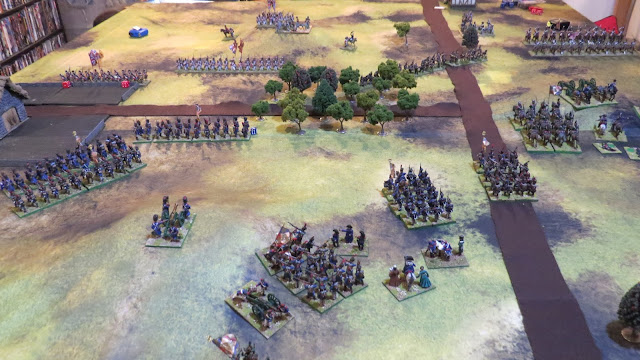 Turn 3, my Guard filling in the left gap, but Scott's rifles already there.  Let the musketry duel begin! 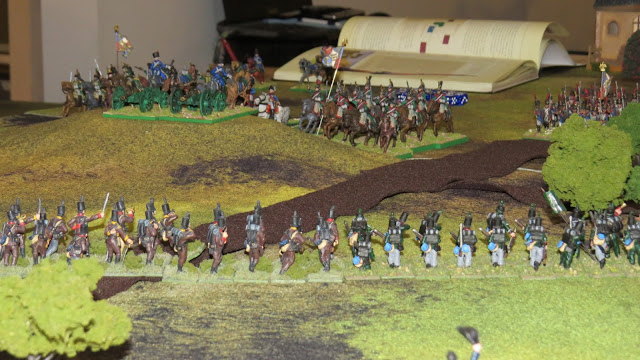 View from the line-deployed Cacadores shoulder to shoulder with the 95th Rifles.  That's a lot of shots up at my Horse guns and Dragoons. 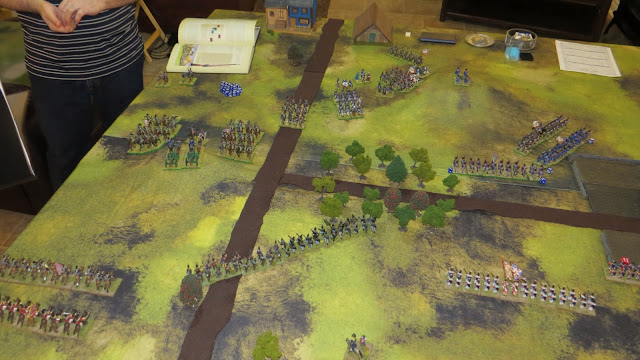 Bird's eye view again, says it all really.. Scott's Brits are formed into shooting line (foreground) while my forces are still trying to get in position in Columns. My only advantage in Columns is mobility, and the far right of screen is the Orchard/Farm, worth 6 VPs, and my Voltigueurs are bee-lining to it. 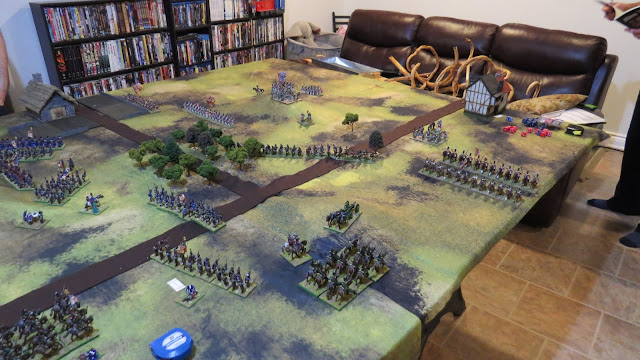 Turn 4, my dragoons have fallen back from Cacadore volleys, and the 95th Rifles have killed one Horse gun crew.    Top left of screen, I am close to taking the high value target though... 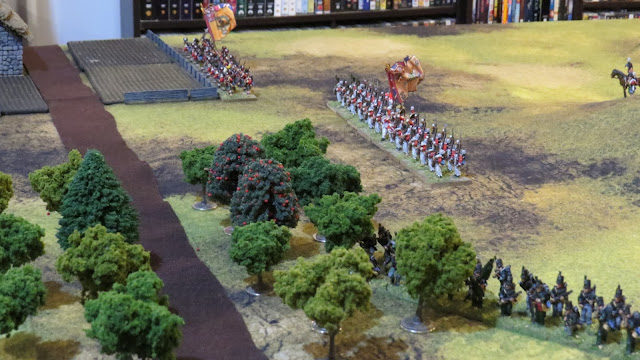 .. and Scott only has Buffs and Scottish Guards to prevent my taking the farm. 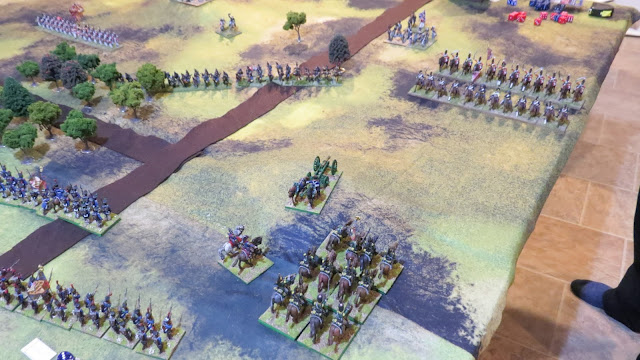 Turn 5, my line infantry come up from left of view to fill in the gaps left by lost battalions.   Scott still has not lost a unit to morale yet.. 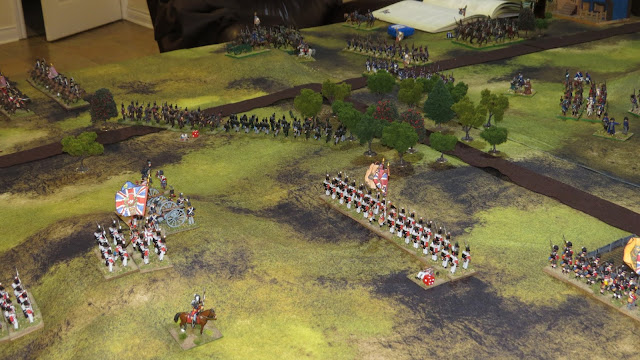 Apart from one unit, all of Scott's army is in position.. which is fire every turn until targets melt away.. 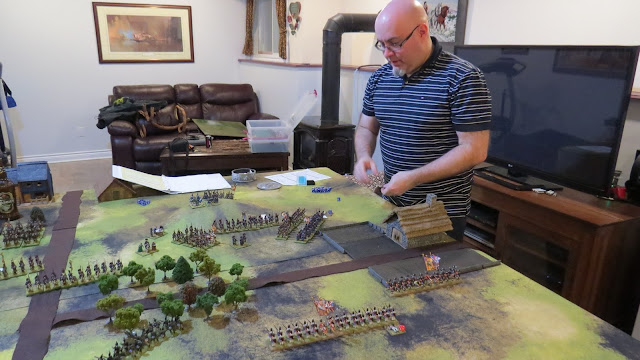 ..while I try and change formation and keep failing my command rolls! 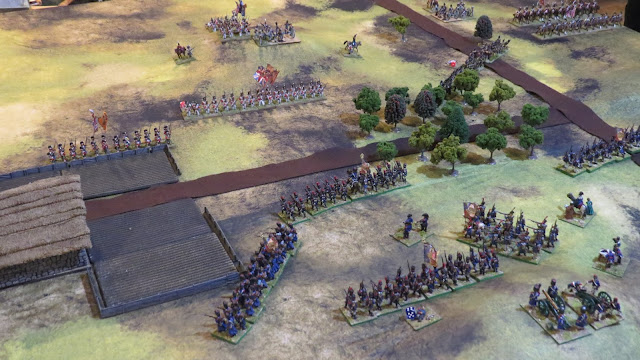 Turn 6, finally my lines are ready, but I have Guards units that have already fallen back from accurate redcoat shooting... 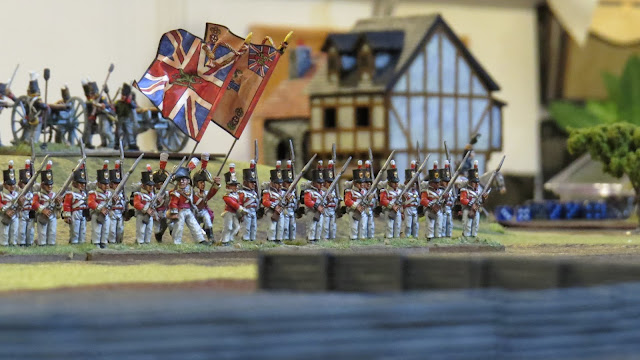 Least they look great doing it though!! 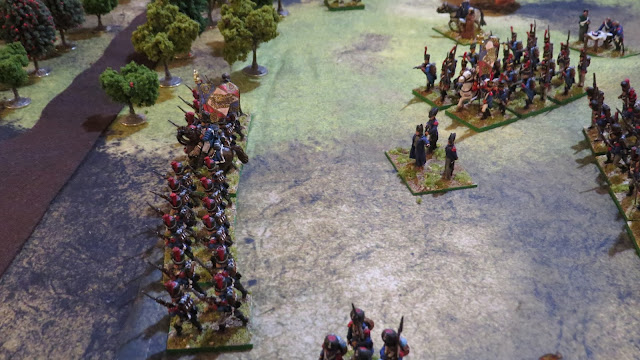 Brigadier not happy with only one Guards unit able to shoot.. 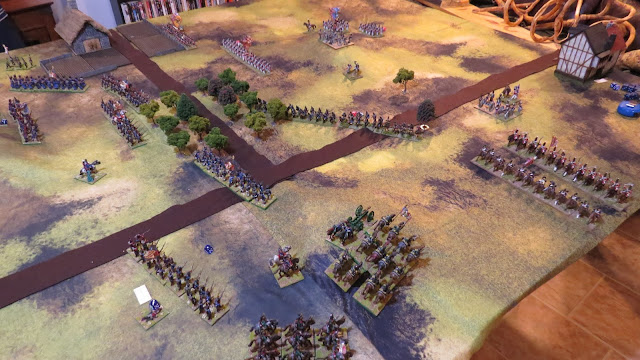 Turn 7, I would lose everything on the foreground hill, causing me to lose a Brigade.  However, my Voltigueurs would take that far left farm, mitigating the loss in unit VPs to eke out the win, as night falls.  One more turn however, the Guards Brigade would have surely fallen, and then the Divisional Commandeur would be testing formation morale.. and I would have failed.

Great game, thanks Scott for hosting, Matt for taking pics.  Hope you enjoyed it!
By Matt Varnish at January 18, 2017