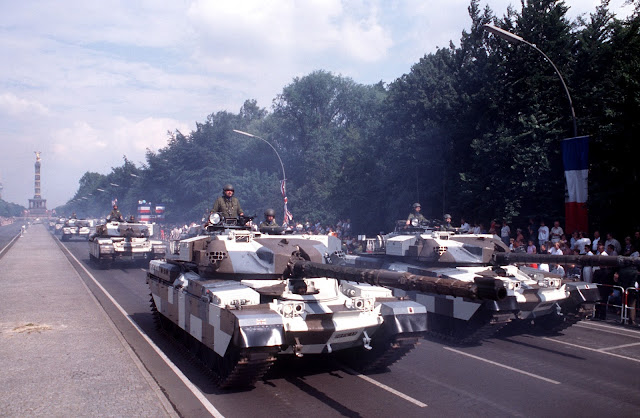 Column of Chieftains at a parade in West Berlin. The mega game felt like this vs 20 Chieftains! 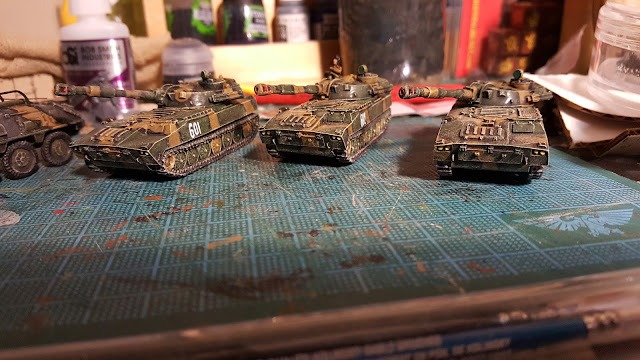 Hey everybody, got a Team-Yankee flavoured post here.. first of all, I have finished my unpainted Soviet stuff (more on order ofc) and here is a closeup of my 2S1 Gvozdika's AKA Carnations.   Doing my research, the barrel linings were coated in red so you could see wear and tear. 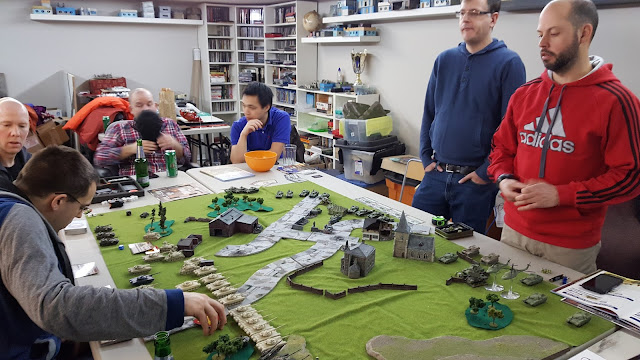 Last week, we got the lads playing some Team Yankee, Matty and Duane picked up some Brits lately, as did Kevin.   Tristan, Andrew and Brett are using spare models for a crazy 3 vs 3 tank-fest. 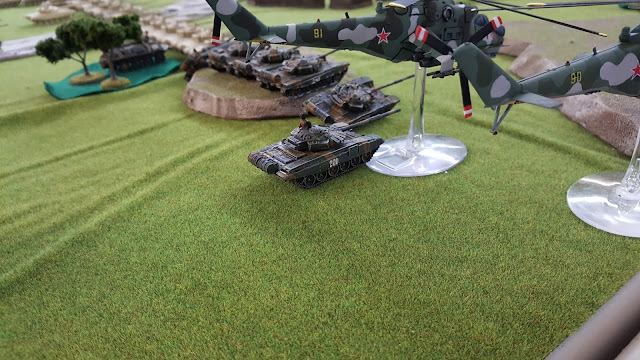 In Hind-Sight, my Mi-24 Hinds should have been 'loitering' instead of deployed.. here they are near the Tank commander (T-80 Zvezda) 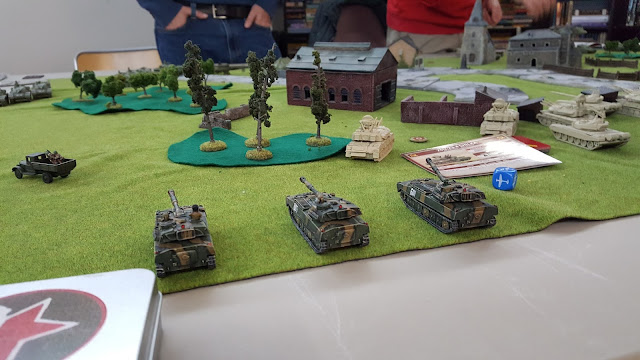 Brett ended up using these as mini tank destroyers.. until they died horribly to Chieftains! We would lose our entire center, but not before taking out two platoons. Andrew bought some of Kev's west Germans and Tristan shocked everyone and bought US.


Fast Forward one week, Andrew and I played a quick 50pt game while we were waiting for Kevin to arrive.  See below!! 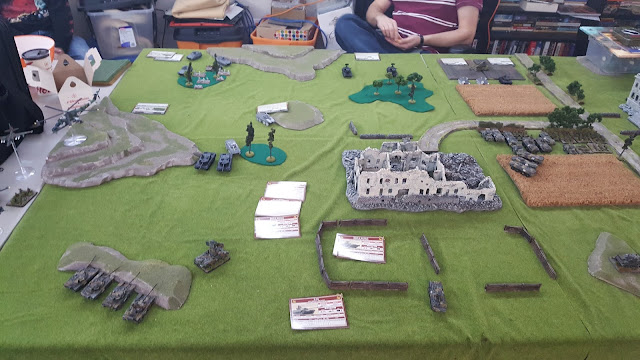 I spearheaded my recce up the far right flank to deploy my BMPs and infantry, and Andrew does the same with his Luchses, to put two Chieftains in my face on my left.  I have to hope for air power to come in.. 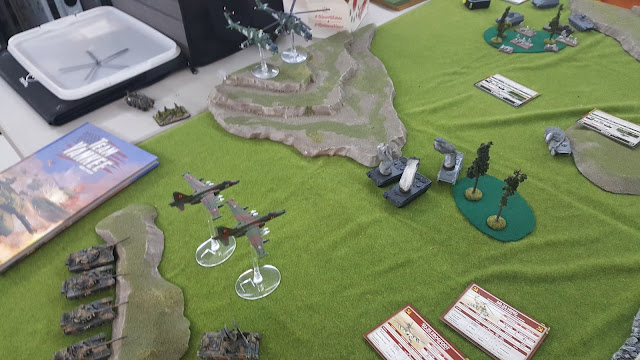 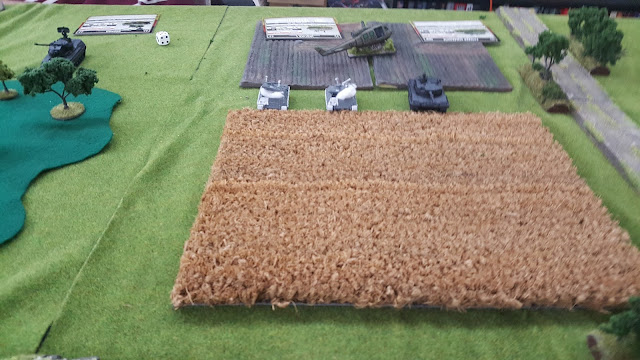 This was the view facing my BMPs.
I took out the two Jaguars, leaving the tank commander alive. 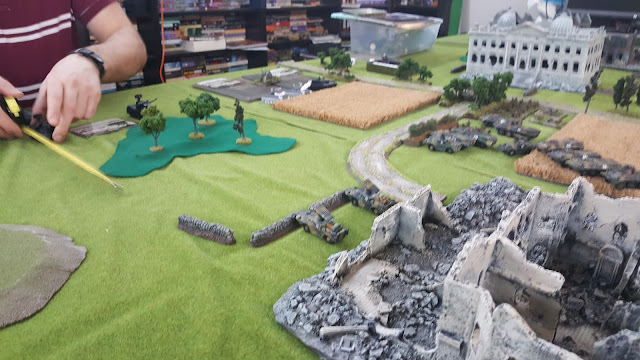 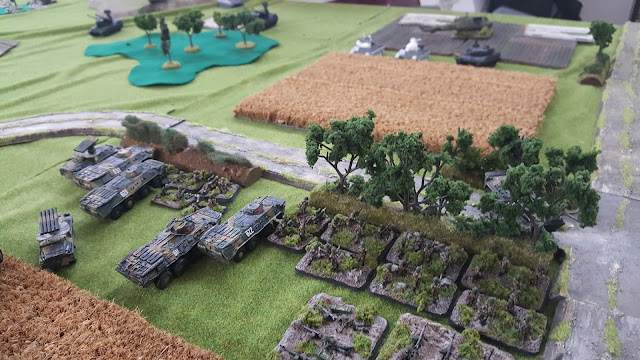 My infantry would move up to try and assault the tank commander, but Kevin arrives, Matty and Tristan finish eating while watching Generation Kill, so the 'big game' can begin: 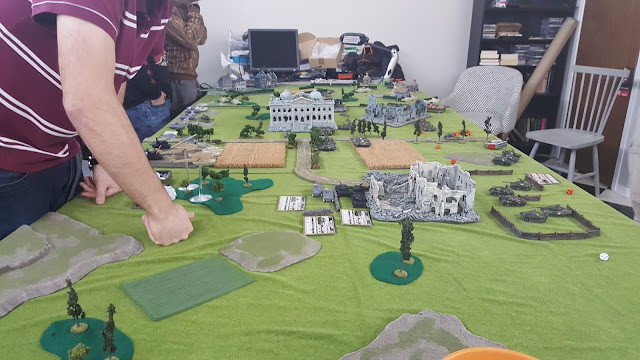 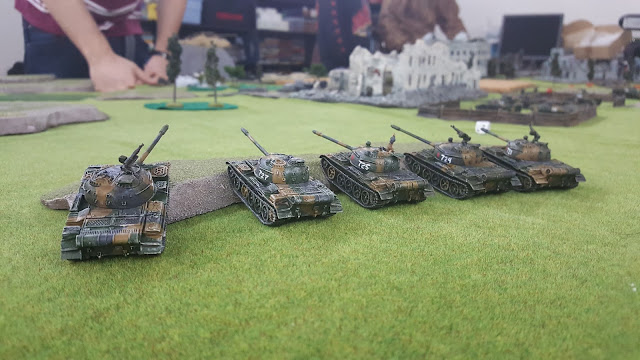 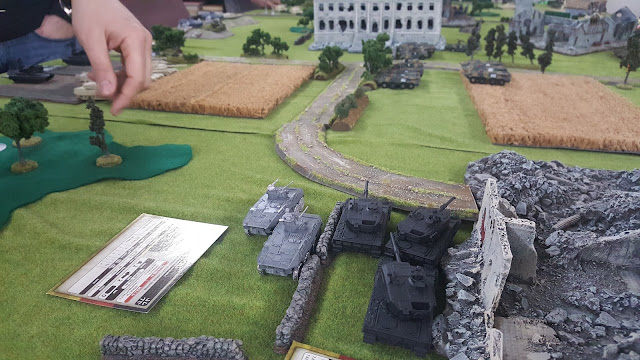 Andrew, having JUST faced the wrath of Spandrel missile spam, recce's up to take on BMPs, who had recce'd up to allow my infantry to occupy the office building in the background there 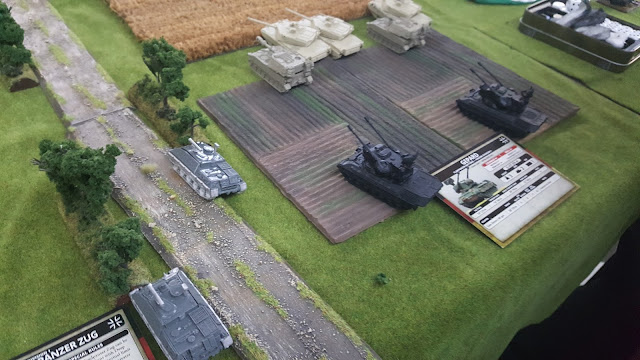 Considering these are less than a week 'old' we can forget the unpainted models!   NATO center forces: Jag's, Gep's and some M1s and M109s 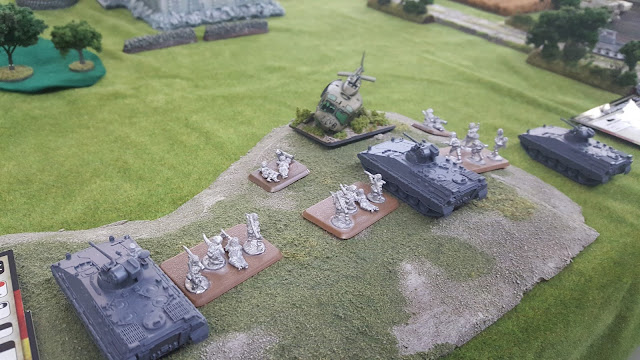 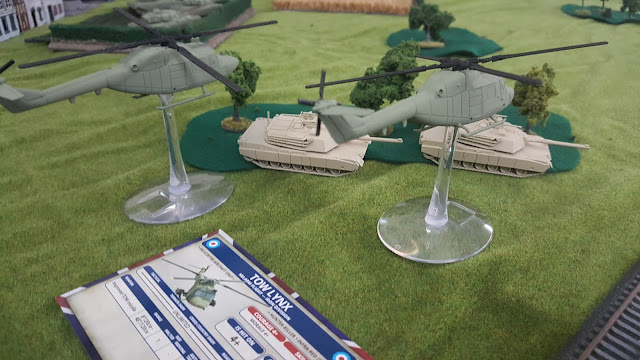 Far flank has all the Chieftains, plus a M1 platoon guarded by Lynx's 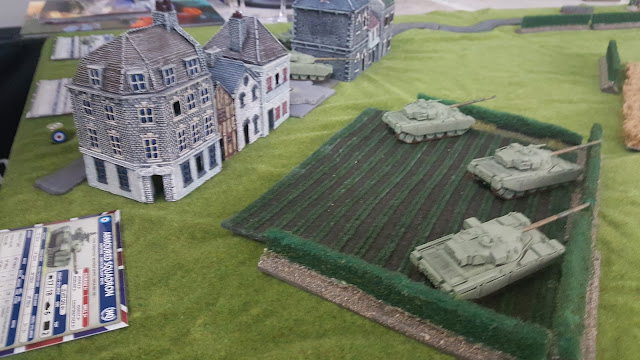 These Chieftains would eventually take some Hind fire, but a survivor would shoot me down with a lousy 7.62 AA mg. Here I thought a Hind-D was all but impervious to small arms fire. Hinds ought to have Flying Tank rule from flames. 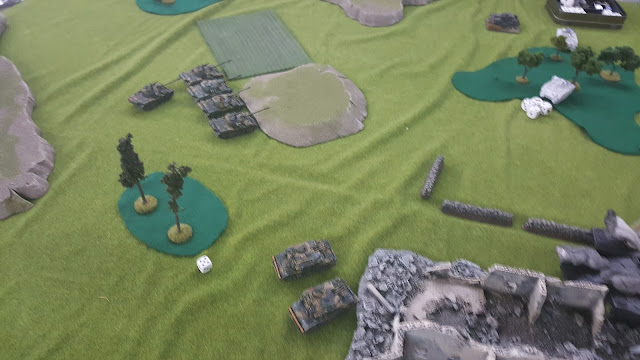 Brett starts to roll the far flank in 'tank country' while the center stays firmly in NATO control. 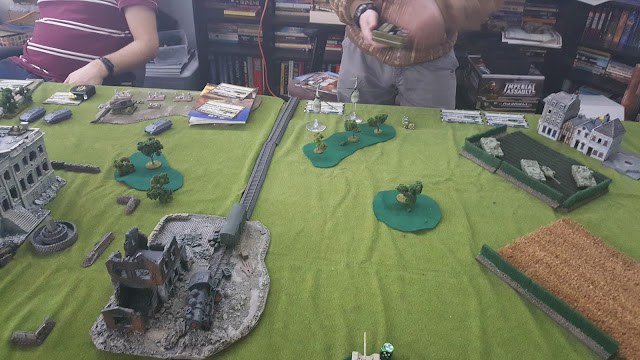 My infantry in the building left of shot cannot get out or be shot dead, so I simply RPG out any Marders that come close.
Building gets shelled by Matty's British M109s all game! 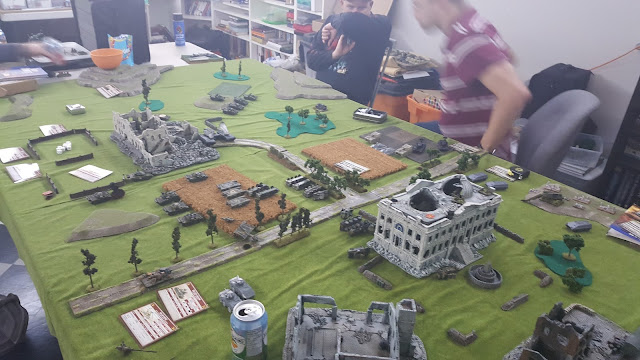 We call the game here.   Soviet center is crushed, Luchses threaten the road objective, but Brett's T-72s are sweeping around to their objective.   Poor Tristan, his whole army left the battle, but he only 'lost' one tank and one Cobra.   Now we know, 2-vehicle platoons go down and all you have to do is bail them out.   Not to be outdone, Matty's Harriers get shot DOWN by 2 T-72s in defensive AA MG fire.  Again, while we all love the new Team Yankee rules, the ease in which aircraft go down to small arms fire is ridiculous.


Hope you enjoyed it, and we have video below outlining the 3 games we played: