Napoleon and HQ staff at a table (vignette) of which I stole 3 officers for heroes on foot
Italian Clergy, to represent 'wizards'   "The power of Christ compels you! <Lightning Bolt>"
2 6lb cannon, one crew with greatcoats.

I have to say I am super super pleased with the Perry stuff.. I am used to the style, as they sculpted the old GW human fantasy stuff.   The infantry sets come with JUST ABOUT 50 / 50 greatcoat to regular campaign uniforms, so I have thus far built 20 Greatcoats (Light infantry) and 20 regulars.   I will probably build only 20 more regular for Kings of War and use the non static pose models (IE, rushing forward, or firing rather than in march order) to represent Voltigeurs, which skirmishers.  There are also enough spare separate heads that my last unit of 20 infantry might all be Chasseurs, who knows.   For Cavalry, one box had 14, the other 13 cav.   I really took my time with this, and was able to make 10 Dragoons, 10 Cuirassiers, and noticed that each cav box had ONE horse with no other equipment on it, and ONE rider model that looked like my infantry.  A quick Googling revealed that infantry commanders would be on horse sometimes, and I noticed on the infantry command sprue 1 each bare head with high collar shouting, and one Bicorne officer head.  That left with me 5 horses, and an assortment of random heads.  I counted... only 5 Bearskin heads.. therefore I was able to knock together 5 Carabiniers, in full charge with sabres out, with bearskin caps, with Musketoons (basically shotguns) to use as Outriders, or w/e they are called in Kings of War.  Enough jibber jabber, here is the pic of them all assembled: 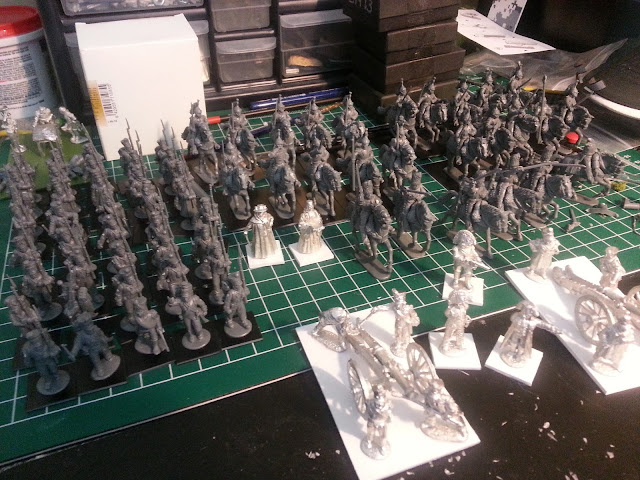 I still have one whole box of Line Infantry to open.. so skirmishers and such still upcoming.  I hope to get that assembled this week, and start painting.   Once again, LOVE the Perry Miniatures.. excellent quality on everything and loads of spare parts.