I have always been a gamer. Board games, PC games (dreaded DOS boot disks), consoles, you name it. So I have held on to some of my old consoles from my younger days, and recently pulled them out and started reminiscing and playing some games.

I want to play more. I want to collect more. I mentioned this in passing to a couple of the lads, nostalgia ensued! We even ended up playing Turtles IV (Turtles in Time), Fatal Fury 2 and Street Fighter II Turbo last Friday on PhantomRescue's SNES.

So I started, over the last month or so, to check out flea markets and the like for some cheap additions to my meager selection of games.

So without further ado, here are some of my recent pickups : 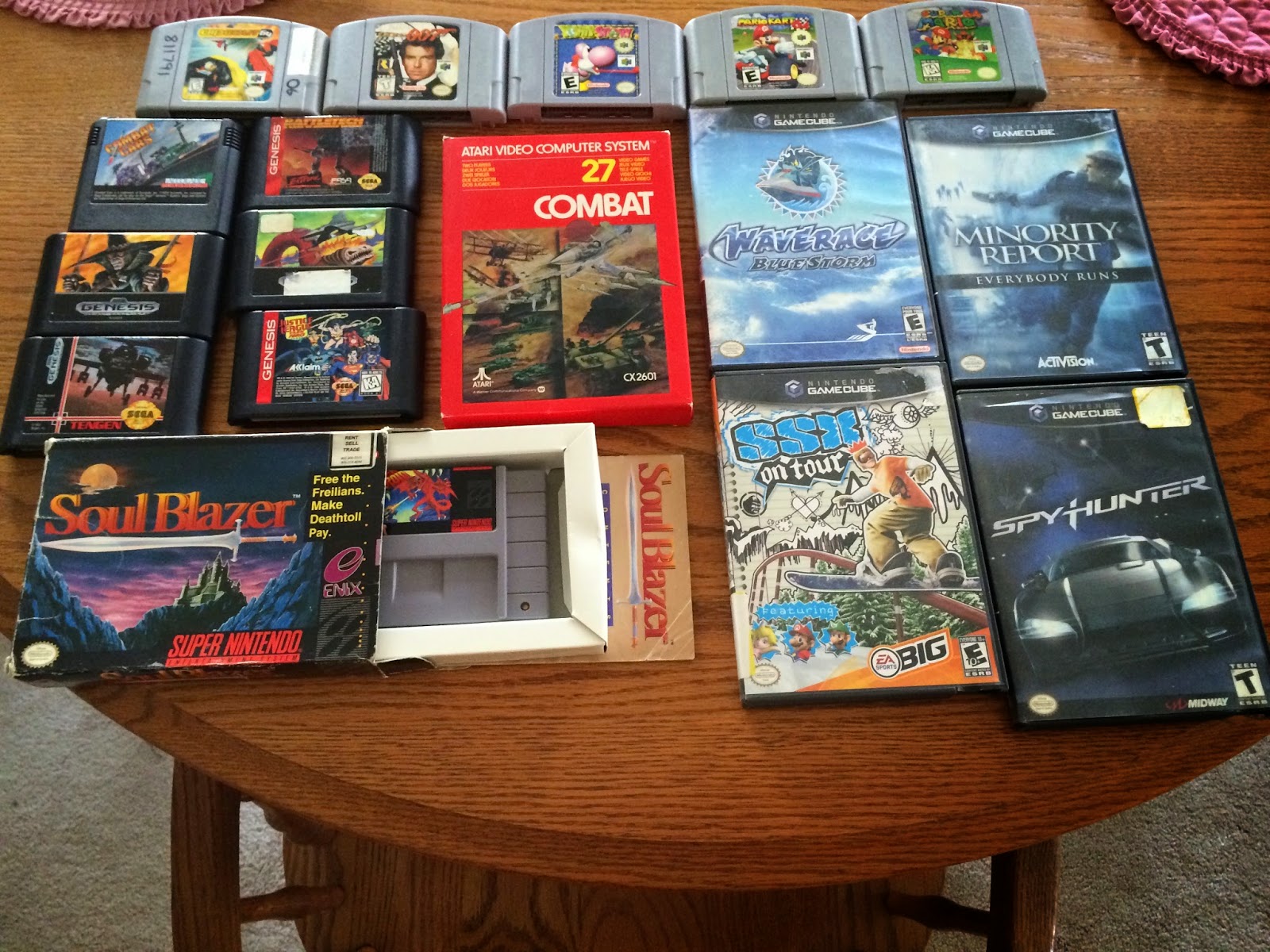 As can be seen in the picture above, I am focused on anything up to about GameCube, SEGA Dreamcast era. Nothing newer. I haven't played a game on my PS3 in over a year...
The Atari 2600 Combat game is complete, and I bought it for PhantomRescue for his collection - I think I paid $5 - awesome.
I then found the 5 Nintendo 64 titles for $2 each - All the classics - Goldeneye, Mario 64, Mario Kart 64, Yoshi's Story and Wipeout 64. $10 for all 5 games.

The Gamecube games were 5$, nabbed 4 for $15! The titles are clear, and all are complete with manuals. The funny purchase was the copy of Soulblazer for SNES - the guy asked $2 for the game, and when I opened it, it has Super Metriod in it (easily a $25 loose game)! Weird, but a freaking amazing deal - he was a game seller, and just wanted it gone. Yoink!

So all this went down in St. Catherines Flea Market - www.niagarafleamarket.ca/

This past weekend, PhantomRescue and I tried a more local flea market we had never heard of, the Rideau Carleton Raceway Flea Market: www.rcrfleamarket.com/

We spent a couple hours, and found all kinds of cool, retro stuff. I saw this and HAD to buy it, as I had one myself when I was a kid -the beige folding set :

I promptly gave this to my 2 year old son, and he is in love with it just as I was.

As for games, here is my haul : 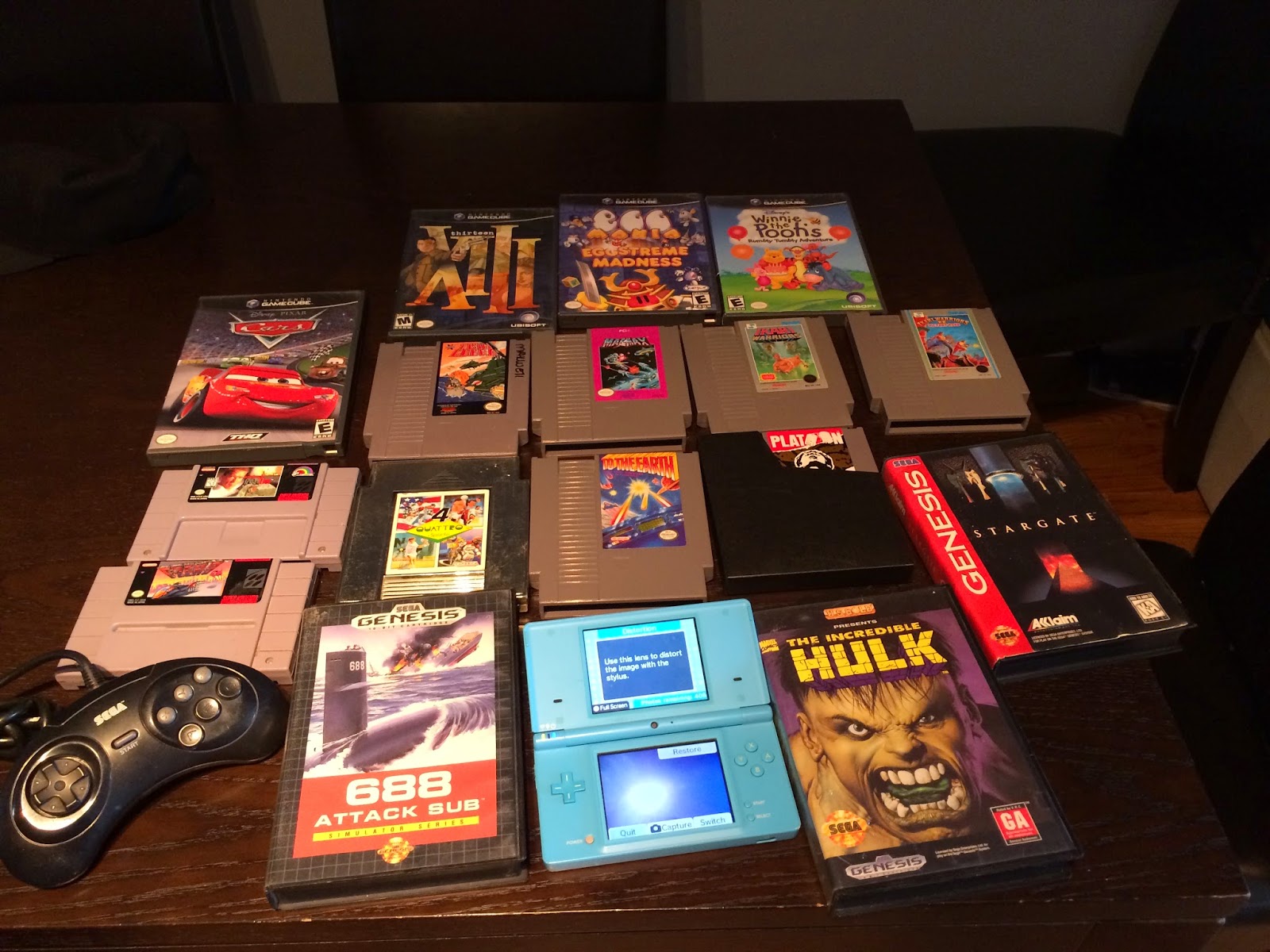 Lots of great deals here. The nintendo DS was $20 with a game and charger. I also grabbed 2 more loose games for $1 each! I picked this up for my 6 year old daugther, and she couldn't put it down. Taking pictures, recording her voice, playing the "Cooking Mamma" game - she loves it. A great find.

All told, I spent  $90 - more than I planned, but the DS and Hot Wheels deals were too good to pass up.

This bug has really bitten me, and I am loving the "hunt" for a deal on games like this. Anyways, I just wanted to post up and keep track of my gains, and maybe one of our readers has an interest in retro games also, and we can chat about it.